Syrian Forces Use Chemical Weapons in Duma for a Second Time in a Month.

February 5, 2018 396 views Download as PDF This post is also available in: Arabic Font Size A A A

Picture for one of the chemical weapons munitions used by the Syrian governmental forces, Source of photo: a media activist from Ghouta (An interviw with STJ

Preface: Syrian regular forces continued their military escalation in several towns and cities in the besieged Eastern Ghouta, as they launched the most violent military attacks on those areas using several types of weapons. On Monday morning, January 22, 2018, the residential neighborhoods in the northwest region of Duma[1] were subjected to an attack with a chemical agent described as chlorine gas by locals, and according to many testimonies obtained by Syrians for the Truth and Justice/STJ, several rockets loaded with chemicals believed to be chlorine gas fell in those neighborhoods, suffocating 21 civilians including women and children.

It is noteworthy that this attack was the second chemical attack on Eastern Ghouta since the beginning of 2018. On January 13, 2018, the area between both Harasta and Duma was also shelled with poisonous gases, injuring six civilians, including women and children, according to a report prepared earlier by STJ.

Nu’man Slick, who hails from Duma and who was near the strike location, spoke to STJ, saying:

"Given the intensity of the shelling on Duma, we took the cellars and shelters as our homes, as we no longer left them unless to serve our necessary needs. Once, while my family and I were in the vault, exactly at 5:30 am, I smelled a strange smell that seemed like chlorine that we use in houses; and instantly I rushed to awaken my children and I took them to a double-locked room.  After that, I began to scream in order to awaken the people, and only minutes later, people started to run in every direction. There had been children who felt unconscious and were unable to breathe well; I tried to help them along with some people nearby as we put wet fabrics on their faces."

In another testimony, Mohammed Oyoun, a doctor from Damascus Countryside Specialty Hospital, said that the hospital began to receive suffocation cases at around 5:45 am and there were about 21 cases of suffocation, with symptoms similar to those of toxic chlorine gas:

"The hospitals received 21 suffocation cases, including 8 men, 6 women and 7 children, with a child who is less than three months. The injured showed the following symptoms: dyspnea, a cough and a neurological irritation, in addition, their clothes smelled of chlorine. We were able to cure most of the cases through the spray with oxygen and bronchodilators. Many cases were directly cured, whereas many remained under surveillance for 24 hours; thank God, no casualties were recorded because the concentration of chlorine substance was not so great in the rockets pounded by the regime as I believe, in addition that the sunrise had softened many of the infected numbers because the sunrise had dissipated the poisonous gas."

Videos filmed after the attack at a local hospital show many of the victims receiving treatment, including 7 children, and 7 adult males, consistent with reports from the Damascus Countryside Specialty Hospital.

Image shows some of the child victims of the on Duma on January 22, 2018.
Photo credit: Activists from Duma.

On January 22, 2018, the Directorate of Health in Damascus and its countryside issued a statement talking about the shelling of Duma with rockets loaded with poisonous gases, which caused suffocation among civilians. It also indicated that it was not the first time that densely populated areas in Duma are subjected to suffocation cases due to exposure to toxic gases, because the city had already been subjected to a similar attack on January13, 2018.

On the same day, the local council of the city of Duma condemned the attack against populated areas and stressed that the city had been subjected to a similar attack nine days earlier. The statement appealed to international organizations to assume their responsibilities in protecting civilians.

Mohammed Al-Shami, alias, an armed Syrian opposition member who was near the strike location, spoke to STJ, saying:

"The north-west area within the stadium located in Duma, along with al-Manfoush neighborhood had been targeted with 9 rockets loaded with poisonous gases. Sound of the rocket launch and the way it fell indicated that it was a Katyusha rocket, which was a Russian-made propellant charge that the regime had modified by supplying it with a homemade cylinder and the head was fitted with homemade detonators, leaking poisonous gas immediately after hitting the ground. It should be mentioned that five rockets had fallen directly on residential areas, whereas the four left had fallen in the agricultural areas adjacent to Duma." 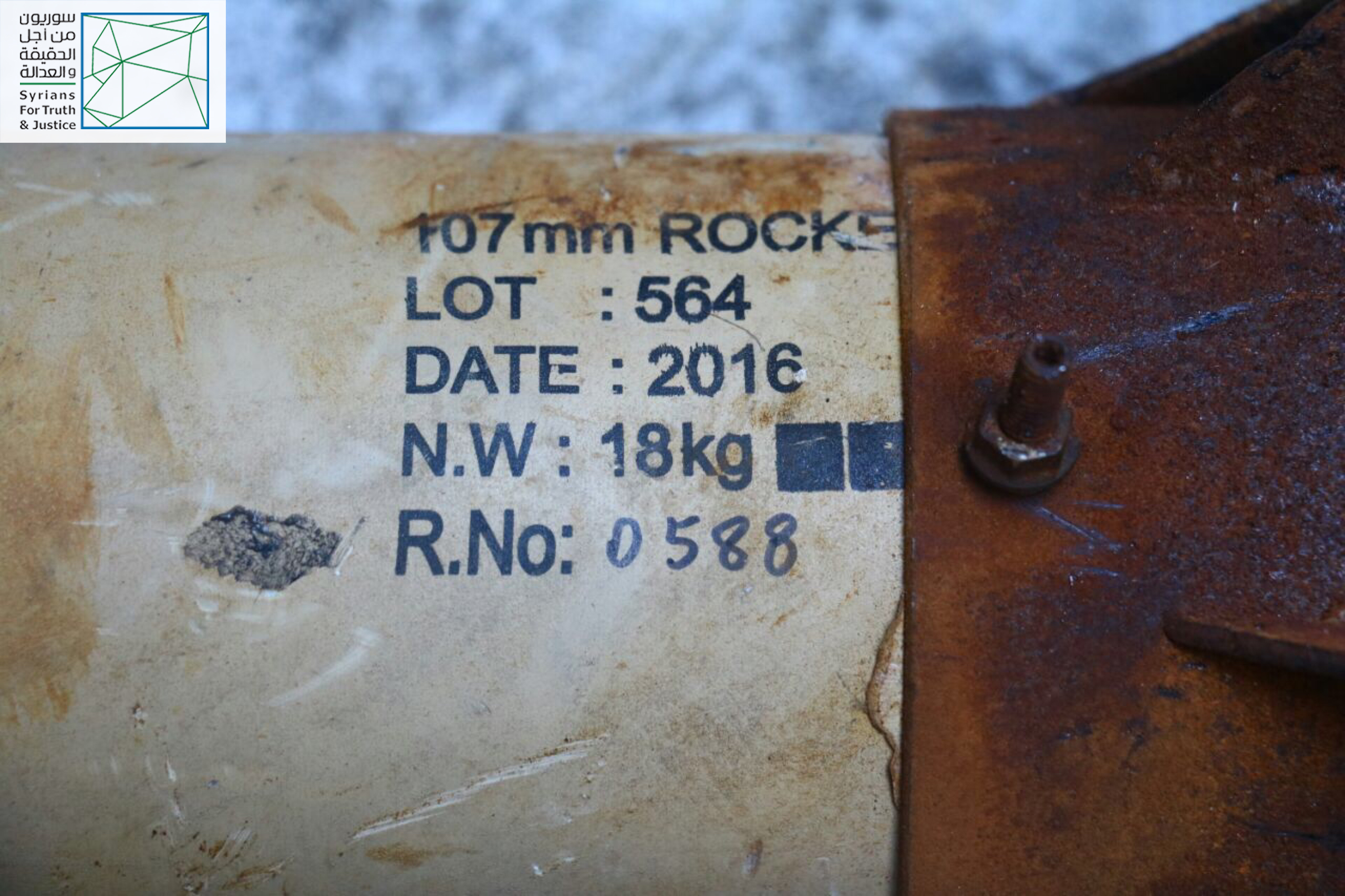 Image shows remnants of one of the rockets loaded with a chemical agent used in Duma on January 22, 2018.
Photo credit: STJ 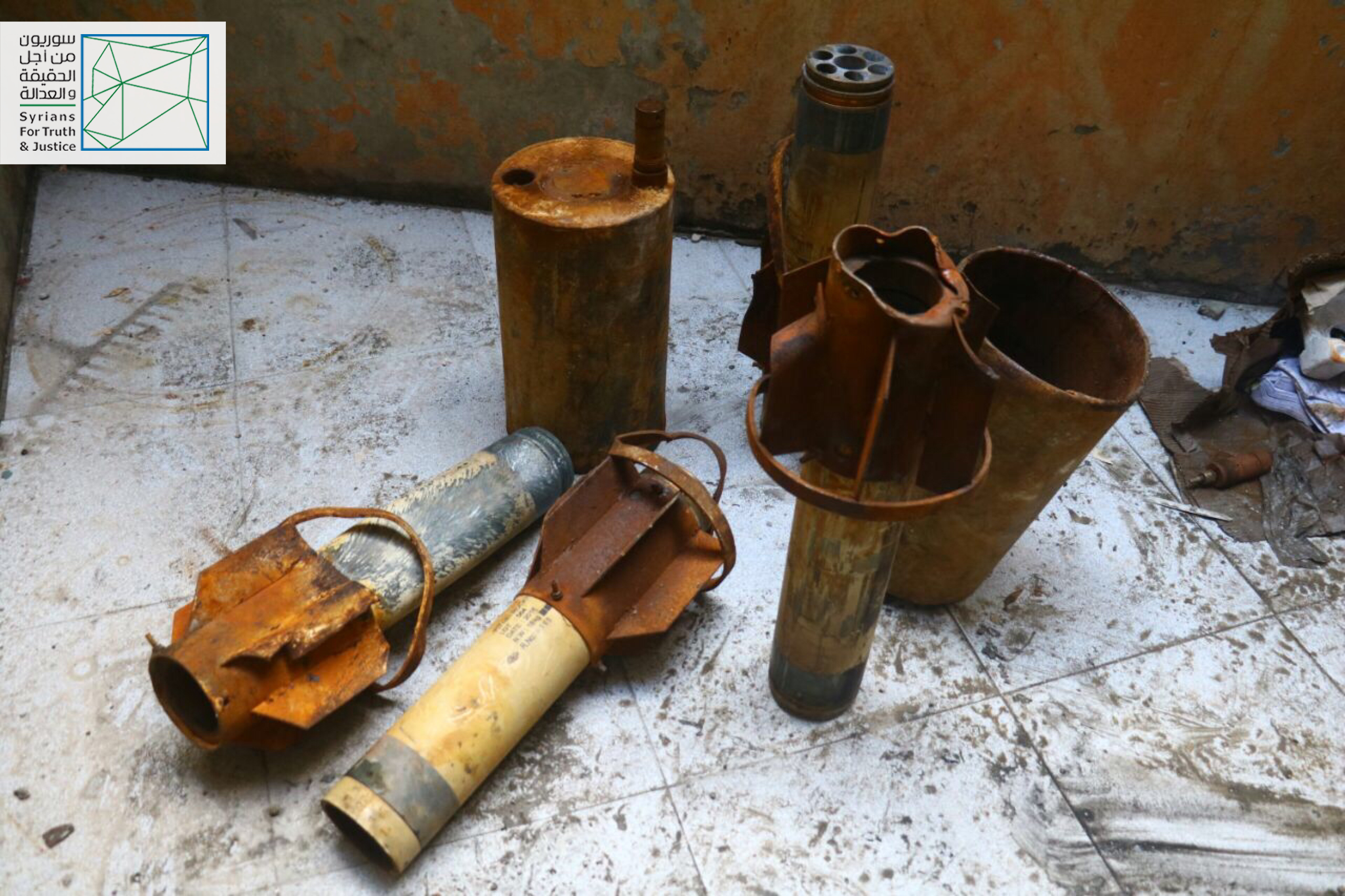 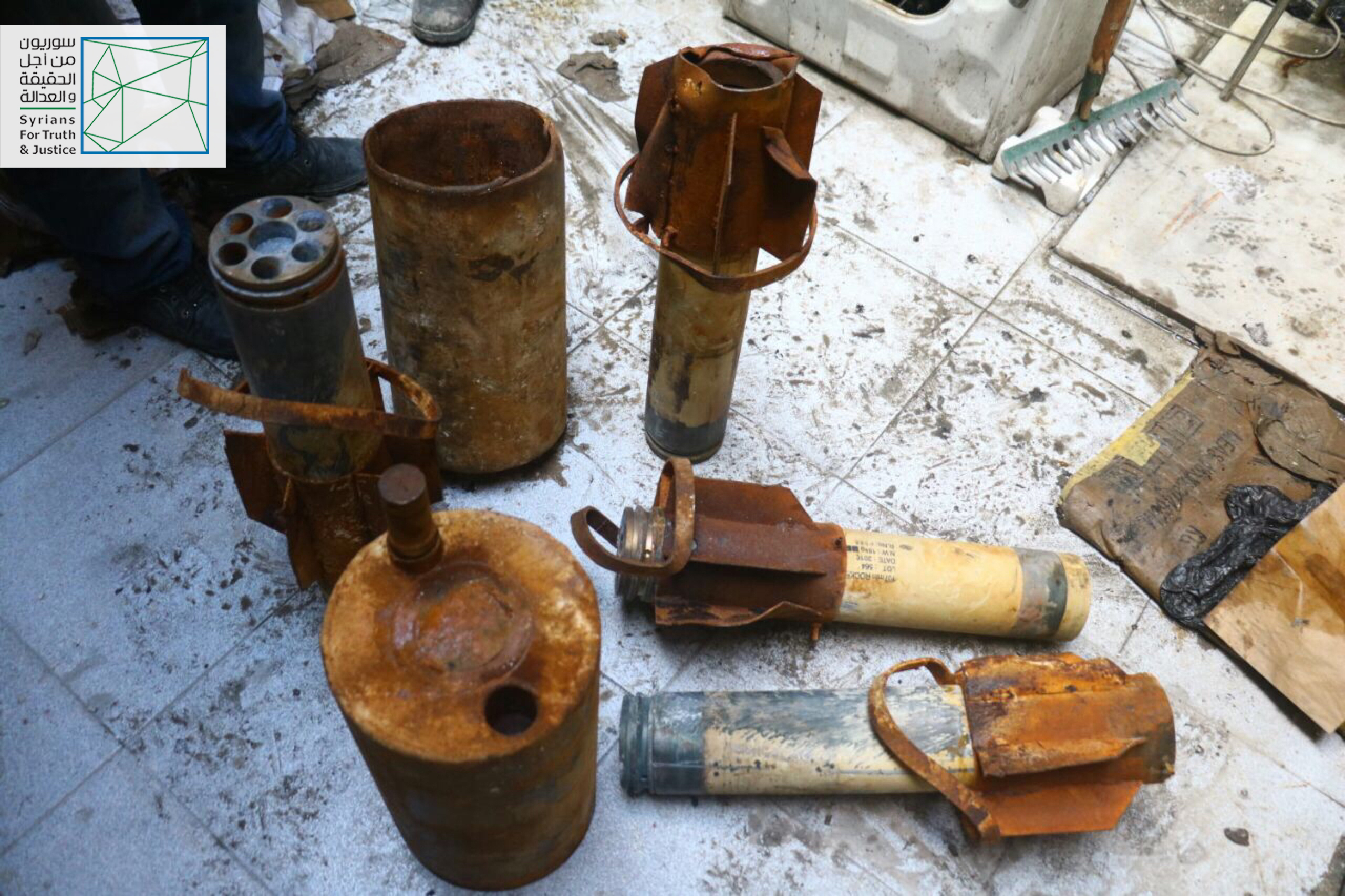 Another image shows several rockets that had been used in the January 22 chemical attack, 2018
Photo credit: STJ

The munitions used in the attack were modified Iranian 107mm artillery rockets, with the explosive warhead replaced with a larger pressurized gas cylinder. Additional tail fins have been added to the rocket to provide additional stability.

Jamal al-Hasan, an activist from Duma who was the first one to reach the impact site, told STJ that one of the rockets loaded with poisonous gases was found embedded in the dirt, and 15 m from its strike location, another rocket was found fallen on a house. The rocket described as found fallen on a house may refer to one rocket it was possible to geolocate, featured in several photographs:

One of the munitions used photographed on the roof of a building.
Photo credit: Media activist from Duma (During an interviw with STJ's reporter).

The same munition as above, moved to the ground.
Photo credit: Media activist from Duma (During an interviw with STJ's reporter).

The location the photograph on the roof was taken is 33.572149, 36.387439, on the roof a one story structure running west to east on the north side of a larger apartment building. In addition to the geolocation of the photographs, the location was also confirmed by locals who took photographs of the munition.

The location of the rocket photographed on the rooftop.
Photo credit: Google Earth/Digital Globe

Jamal al-Hasan noted that the rocket was carrying a white material similar to ice on its surface. In this regard, he continued:

"With the onset of the sunrise, this white material began to fade gradually, and once I attempted to touch it, it was very fragile, which caused me a severe headache lasted until the evening. Even the animals have not been spared the effect of this poisonous gas, as I saw a dead cat near the impact site."

A photograph published by Bassam Khabieh on Facebook on January 22nd showing a dead cat close to one of the impact sites
Photo credit : Bassam Khabieh

A photograph published by Bassam Khabieh on Facebook on January 22nd showing the munitions used with frost on the warhead.
Photo credit : Bassam Khabieh

The two objects in the rear of the warhead appear to be pressure relief valves, although the exact function is yet to be established. An extensive gallery of images showing the munitions in detail can be found here.

One of the objects removed from the rear of the warhead.
Photo credit: STJ

One of the objects removed from the rear of the warhead dismantled
Photo credit: STJ