“The Camp Contains Up To 8,000 Displaced from Deir az-Zor and Raqqa”

Preface: Thousands of displaced people in Mabrouka Camp located west of Ras al-Ayn/Sari Kani city suffer from dire humanitarian conditions, notably with the arrival of harsh winter and shortage of medical services provided to them. Syrians for Truth and Justice/STJ reporter estimated numbers of the displaced within the camp, until early January 2018, to be approximately 8300. He noted that a large part of the displaced had already displaced from Raqqa province before it was held by Syrian Democratic Forces/SDF and extracting it from ISIS on October 20, 2017. Nonetheless, the camp is considered to be a shelter for thousands of displaced fleeing the military operations that Deir az-Zor witnesses[1].

On the other side, during December 2017, Mabrouka Camp witnessed the death of three children due to fierce cold and shortage of medical services, this led many of the displaced to demonstrate on December 13, 2017. However, security of the camp broke up the demonstrations and prevented entry or exist through the camp.

On December 20, 2017, the displaced demonstrated once more, but security of the camp broke up the demonstrations again, put barbed wire around the camp, and prevented the entry and exist within the camp until December 27, 2017, according to many testimonies obtained by STJ late December 2017. 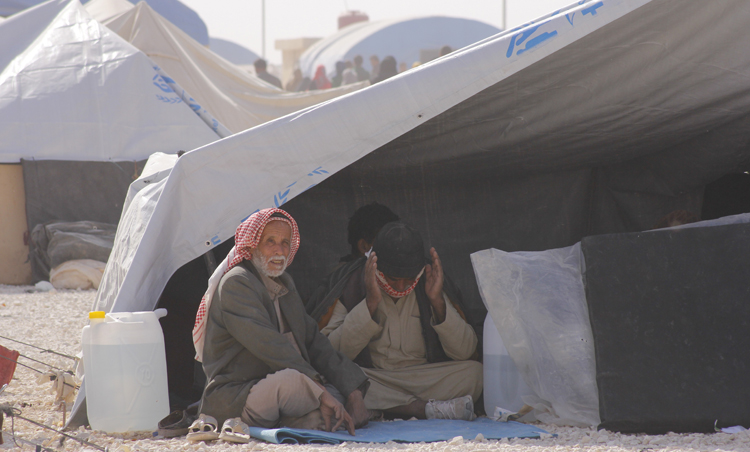 Parallel to intensification of military operation that both Deir az-Zor and Raqqa witnessed, many locals fled towards the southern and the west-southern countryside of al-Hassakah, which is held by the Autonomous Administration. According to STJ reporter, the Autonomous Administration at the beginning, transferred the displaced to inside al-Hassakah or to al-Hol Camp, which was established on April 21, 2016, east of al-Hassakah.

When the displaced started to flock from both provinces, the Autonomous Administration began to reclaim an agricultural land, approximately about 40km west of Ras al-Ayn. The land is parallel to the north part of Mabrouka town in order to receive the displaced. The camp was established on January 28, 2016 and is still being constructed from inside.

A satellite image illustrates the approximate location of Mabrouka Camp.

Second: Aggravation of Human Conditions within the Camp

Suffering of thousands of the displaced multiplied with the arrival of winter as number of the displaced from both Deir az-Zor and Raqqa topped up to 12,000 displaced until November 24, 2017. However, the number decreased to reach 8,300 displaced[2] until early January 2018.

Ali. Kh[3]. One of the displaced from Deir az-Zor countryside who arrived at Mabrouka Camp on June 18, 2017, spoke to STJ about the difficult humanitarian conditions in the camp and said:

“We displaced from our villages in Deir az-Zor fearful of being killed there. We came to Mabrouka Camp and they placed us in the arrival camps for three days, then they distributed the tents to us, knowing that the United Nations High Commissioner for Refugees/UNCHR distributed tents nearly through “mediation” in which large sums of money were paid to get a tent two days ahead of the day scheduled. The sums reached 15, 000 at the minimum.”

Ali added that the medical situation in Mabrouka camp has reached its worst. He noted that there are many medical points of the International Committee of the Red Cross/ICRC, and the Kurdish Red Crescent/Heyva Sor, but most of them resemble the emergency rooms in public hospitals, as they do not give painkillers unless the patient is about to die. He continued:

"We have no heaters and it there is no good sun, half of the displaced in the camp will die due to the cold, just like what happened on December 12, 2017, when a child died as a result of exposure to extreme cold and his family were unable to aid him in time. One day later, another girl child died, and another boy also died in less than a week.”

Another displaced person from Raqqa province, who refused to disclose his name but merely mentioned the title “Hamoudy Abu Mohammed”, told STJ that he arrived the camp on September 22, 2017, following a three-day exodus from Raqqa. He pointed out that although the situation was too bad in his hometown, but it is still much better than the current situation within the camp, especially with the onset of winter and the harsh cold that the displaced are exposed to. In this regard, he continued:

"Heaters were distributed to half the displaced in the camp, while the other half did not receive anything. Almost two days later, some brokers inside the camp told us that there were heaters for sale if we wanted to buy them. It has become clear to us that there are heaters kept inside the warehouses, in order to impose on us the policy of monopoly, so that we remain without any penny in addition to be already homeless fleeing from one place to another."

Hadeel Soheil-alias-one of the women, who migrated from Raqqa with her three children, arrived at Mabrouka Camp on September 23, 2017. She said to STJ that she lost her husband during the military operations against ISIS in Raqqa, and that she came to Mabrouka Camp hoping to get some ease and safety. She pointed out that she was shocked by the camp situation, which lacks the minimum necessities of life, notably with the arrival of winter, because the situation in the camp became much worse than what it had been in the summer. She just said:

"In summer the sandstorms were ravaging us and uprooting our tents. Now in winter, we cling to our tents fearful of the ruthless cold."

Image shows one of the displaced in Mabrouka Camp, taken on December 24, 2017.
Photo credit: STJ

Third: Deaths of Children and Outbreak of Protests inside the Camp

According to a STJ reporter, three children died in a camp in Mabrouka Camp in December 2017 alone, due to a lack of doctors as well as the harsh winter cold. This led many displaced people to demonstrate and protest inside the camp, but the camp administration closed the entry and exit road for two consecutive weeks.  In this regard, the displaced Ali. KH told STJ:

"On December 12, 2017, the two-year old child Rafeef Salloum suffered from shortness of breath but the official working day ended in the medical clinic inside the camp. Therefore, the child was taken to Ras al-Ein Hospital, but she lost her life on the way.  Moreover, on the same day, a child identified as Methaq Saddam, 5, from Deir az-Zor province, died as a result of severe cold inside the camp.”

Ali added that deterioration of the humanitarian situation in the camp has led many displaced persons to congregate in front of the camp management on December 13, 2017. He noted that there was no problems in the early hours, until security forces of the camp broke up that congregation two hours after it had occurred. Therefore, a fight between one of the camp's security officer and one of the displaced prompted the other displaced to flee to their tents lastly. Ali added:

"Two days after the demonstrations, another child identified as Abdullah Wasim an-Namous, 2, from Deir az-Zor died because of inhaling some of gases resulting from operating the kerosene heating inside the tent. He was treated later, but in vain."

The displaced, Hadeel Soheil, added that the displaced went out and demonstrated once again after the death of the child "Abdallah an-Namous", specifically on December 20,  2017, but the camp security forces broke up the demonstrations and prevented the entry and exit from the camp until December 27, 2017.

Hamoudy Abu Mohammed, the displaced, commented on the recent events mentioned above and said:

"Barbed wire has been placed around the camp and the guard has also been tightened. All exits from the camp have been stopped, and some brokers have begun, at the time, to remove the displaced out of the camp in exchange for approximately 100,000 Syrian pounds per person. The situation in the camp has changed completely following those protests."

It should be noted that, according to recent figures from the camp administration, the camp contains about 1,350 displaced families, and the number might increase or decrease due to departures from the camp or coming from other camps located within al-Hassakah province. It is also noteworthy that the Autonomous Administration manages the camp under the supervision of UNHCR, as well as the International Rescue Organization (IRC) and Mercy Corps organization together with the United Nations Children's Fund (UNICEF), the Kurdish Red Crescent/Heyva Sor, and the World Food Program WFP, the Norwegian Refugee Council NRC and the child protection organization.

Image shows one of the displaced persons in Mabrouka Camp, carrying the aid basket provided to him by UNHCR, taken on December 24, 2017.
Photo credit: STJ

Earlier, STJ had prepared a report highlighting camps for the internally displaced persons located within areas of the Autonomous Administration in northern Syria. STJ has recently published a report that speaks about suffering of the displaced people in al-Shadadi camp, south of al-Hasakeh with the arrival of winter.

[1] On September 9, 2017, the Military Junta in Deir az-Zor affiliated to SDF and backed by International Coalition Forces, launched the battle of Island Storm to control the ISIS-held southern countryside that was left in al-Hassakah province, in addition to areas east of the Euphrates that administratively follow Deir az-Zor province. The Syrian regular forces had announced in June 2017 the battle of Deir az-Zor in order to expel ISIS militants from the west side of the Euphrates. The battles were accompanied by heavy Russian/Syrian shelling in addition to UN coalition forces warplanes, the matter that led locals of Deir az-Zor to displace daily.

[2] According to STJ reporter, number of the displaced decreased after many of them went out of the camp by sponsorship of residents from al-Hassakah. Those displaced headed towards Manbij and Jarabulus.

[3] An alias for security purposes.