Image of a child looking through a window of a vehicle specialized to evacuate 29 sick cases from Eastern Ghouta. Photo credit: The Twitter account of the Syrian Arab Red Crescent

Preface: On Tuesday, December 26, 2017, the first batch of trapped patients on “evacuation lists” in Eastern Ghouta, Damascus countryside, was evacuated; it was five cases out of 29, which Syrian government agreed to take them out of Eastern Ghouta in exchange for the release of 29 detainees by the Army of Islam faction[1], including number of civilians detained during the break into Adra O’malia  district in Damascus countryside on December 11, 2013, after number of armed opposition factions[2] carried out a large-scale military operation in the area.

In addition to evacuating (29) patients, 56 civilians were evacuated as escorts or relatives of the patients.

According to several testimonies obtained by Syrians for Truth and Justice/STJ reporter in December 2017, the evacuation was carried out on three days as batches mediated by the Syrian Red Crescent. Anyway,  most of those evacuated were from urgent emergency patients who could not be treated due to the siege of Eastern Ghouta for several years, beside lack of medicine, and among those cases were (9) children who mostly have cancer and kidney failure. According to many testimonies, the medical cases, that were evacuated, are out of more than 675 cases registered on the urgent evacuation lists of Eastern Ghouta, awaiting a gloomy fate if not evacuated.

It is noteworthy that Eastern Ghouta is considered to be one of the de-escalation zones in Syria, as on May 4, 2017, the sponsor states signed the Astana talks (Russia, Turkey and Iran) on a Memorandum of Understanding for the establishment of "de- escalation" zones in Syria, it included the Eastern Ghouta in Damascus countryside, Idlib province and some parts of northern Homs province , as well as some parts of adjacent provinces (Latakia, Hama, and Aleppo) and some parts of southern Syria, one of the most prominent items was cessation of hostilities between conflicting parties and creation conditions for access of medical aids .

On July 22, 2017, the Islamic Army signed the agreement of de-escalation zones in Syria, followed by Failaq al-Rahman on August 18, 2017.

The United Nations humanitarian Coordinator in Syria, Jan Egeland, stated that he feared that the evacuation of sick children from Eastern Ghouta which is controlled by the armed opposition forces would be used as a "bargaining chip", in a comment that the Syrian armed opposition agreed to release Syrian government detainees in exchange for the evacuation of sick children.

This is not the first time that civilians have been used as a bargaining chip, STJ issued a special report about dozens of exchanges (civilians were their fuel) during the years of the conflict in Syria.

Hassan Slayek, an officer in charge of the medical file in Eastern Ghouta, told STJ that the first batch was evacuated at about 08:30 on Tuesday evening, December 26, 2017, and reported that it lasted during midnight that day, he added:

"Among the first cases were three children prepared for evacuation, and it is remarkable that many of the patients refused to go out with their children, fearing of the arrest of the regime's forces. Therefore, we tried to obtain guarantees from neutral parties, but we could not get any written staff. However, there was a UN committee that accompanied the Red Crescent and gave oral guarantees to civilians to not be subjected to arrest. ”

"The number of evacuated cases was (29); they were urgent and classified to be level one according to a medical committee of the Red Crescent in Duma. Anyway, these cases are only part of 675 medical cases in Eastern Ghouta, as they are desperately in need to be evacuated from Eastern Ghouta.

For its part, the Army of Islam published on its own Twitter account, on December 28, 2017, a statement about an exchange operation between it and Syrian regular forces, referring to the evacuation of (29) medical cases with their families from Eastern Ghouta, in exchange for release of (29) detainees. It pointed out that it had obtained assurances from the Syrian Red Crescent that the Syrian regular forces would not harass the injured nor their relatives.

The statement, published by Army of Islam on Twitter, confirmed the exchange deal between it and Syrian regime forces to evacuate (29) sick from Eastern Ghouta for the release of 29 detainees they had already detained.
Photo credit:  Army of Islam account on Twitter.

The political body of Army of Islam stated in a press release that number of those who were released in the exchange deal were actually detained since storming Adra district on December 11, 2013.

Statement by the political body of the Army of Islam.
Photo credit: Telegram channel of Zahran Aloush, the commander of the army of Islam.

On the other hand, on December 27, 2017, the International Committee of the Red Cross (ICRC) twitted that it had completed the evacuation of 85 civilians from Eastern Ghouta, including 29 emergency medical cases that need treatment in Damascus hospitals.

According to STJ reporter, 8 carcinogenesis sick children, in a deplorable state due to the lack of treatment under the siege of Eastern Ghouta, were among the medical cases that were taken out of Eastern Ghouta. However, Dr. Wissam ar-Rez, the director of al-Rahma Oncology Centre in Eastern Ghouta, spoke to STJ about that saying:

"The evicted children are (Zuhair al-Gazawi, Sybah Rashid, Mu’ayid Hamid, Rawda Abbas, Fahad al-Kurdi, Angie Taleb, Samer Arish and Loay al-Mulla). Each one of them has a tragic story that cannot be expressed in a few words, and most of them were of the urgent and compelling cases. Anyway, there was great hope for their recovery if there was not siege or shortage of medication in Eastern Ghouta.  For example, the child, Zuhair al-Gazawi, 10 years, has begun to suffer from the disease since early 2017, and he was supposed to receive treatment in Eastern Ghouta, but the siege and the denial of access to medicines had worsened his condition. We reduced doses of treatment assigned to him due to the lack of sufficient medication and that led to the amputation of his foot from a tumor; I met him before he was taken out of Eastern Ghouta and he seemed very fatigue."

Dr. Wissam recounted the story of another child identified as Mu’ayid Hamed, 10 years, who also suffered from brain tumor since 2012, noting that the disease that affected the child was due to psychological factors, as the child's home was shelled by the Syrian regular forces and killed five of his family.  One week later, they shelled his house again causing a state of horror and a severe setback in his state. His relatives tried to take him out several times to receive treatment, the doctor added:

"These children have been able to go out to receive treatment, but more than 200 children who suffer from cancer are in dire need of treatment. For example, there is a child identified as Noor Abu Ahmad, who has a cancerous tumor in her eyes, which considered a rare and an urgent case for treatment. If she cannot undergo a surgery at great speed, it will threaten her life.  Noor has another sister identified as Sara Abu Ahmad, who was also among the cases in need of immediate eviction, unfortunately, she died about four months ago due to her poor health conditions."

On December 27, 2017, Damascus Now page published  a video footage showing Angie Sadi, the representative of the International Committee of the Red Cross (ICRC) in Syria, talking about evacuation of (29) medical conditions out of Eastern Ghouta, noting that the Committee is not a part to any political negotiations or agreements being held among parties to the conflict, and that this agreement was reached between parties to the conflict within the Eastern Ghouta. She confirmed that both ICRC and the Syrian Arab Red Crescent requested to facilitate this agreement. She added that there were families accompanied their patients.

Mohammed Aloush, a commander of the Army of Islam, and a chief negotiator of the Syrian opposition delegation to the Geneva Talks in January 2016, twitted that the evacuation was carried out in cooperation between the Army of Islam and the Red Crescent only.

In another tweet, Aloush confirmed that evacuation of the 29 humanitarian cases occurred in exchange for the release of 29 prisoners by the Army of Islam. 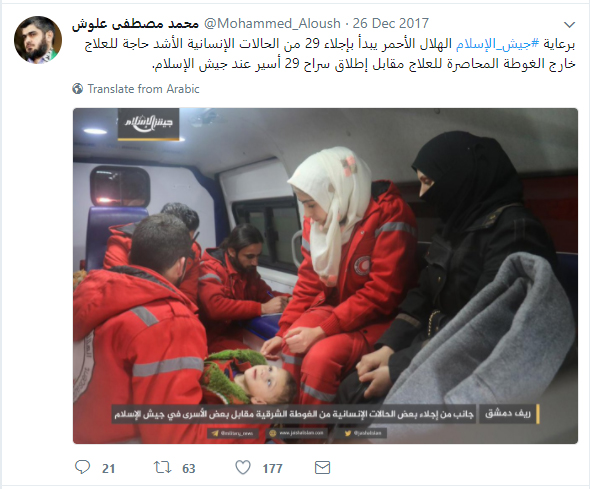 Media sources affiliated to Syrian government had published a list of detainees names, who had been detained by opposition factions at different times.

[1] In September 2011, Zahran Aloush the former prisoner in Sednaya Military Prison, announced the formation of the opposition "Battalion of Islam” that later became, in mid-2012, the "Liwa al-Islam". On September 29, 2013, the brigade merged with a number of other factions to announce the formation of the "Army of Islam" and later joined " Islamic Front ", in the same year, including other Islamic brigades, al-Tawhid Brigade, Suqour al-Sham, Ahrar al-Sham al-Islamiyya Movement, and Liwa al-Haqq, " Zahran was the commander. The army is now mainly active in Eastern Ghouta located in Damascus countryside, but it also located in most areas out of control of the Syrian government except the areas held by ISIS and by Syrian Democratic Forces/SDF.

[2] On December 11, 2013, a group of armed opposition factions stormed the city of Adra Labor and conducted a large-scale military operation, one of the most prominent military formations involved in the breaking (the Islamic Army, Ajnad al-Sham Islamic Union, al-Nusra front and the Islamic State in Iraq and Sham/ISIS, they entered the city and conducted  a campaign of arrests of  several Syrian regular Army officers in addition to scores of women and children, mostly were Alawites and Druze.