The Control Coincided with the Holding of the Syrian General Conference, which later Formed the So-called "Salvation Government"

Image shows a side of the Finance Service’s work in Saraqib prior HTS’s seizure on October 1, 2017. Photo credit: STJ

Preface: Hayat Tahrir al-Sham/HTS (formerly al-Nusra Front)[1] managed to control and seize a number of civil and service institutions in Saraqib city, Idlib countryside, although these institutions were originally affiliated to the Local Council of the city. On November 21, 2017, Services Management[2], affiliated to HTS, seized the "Potato Market" within the city; this market is one of the most important investment sectors securing the financial resources of the Local Council in Saraqib city.

According to Syrians for Truth and Justice/STJ reporter, HTS, by its Services Management, did not only seized the "Potato Market", as only during October 2017, it imposed control over three service and civilian institutions, which were affiliated to the Local Council. On October 1, 2017, the Services Management of HTS seized the "Finance Service" in Saraqib city, which it used to enter around 100 thousand Syrian pounds to the local council treasury on a daily basis. Only one week later, on October 8, 2017, the Services Management fully controlled the “Service of Land and Civil Registry”, in order to stifle the Local Council and put pressure on it. On October 15, 2017, HTS seized the city's "Water Unit", and assessed a monthly fee of about 1,500 Syrian pounds per family, in exchange for pumping water to their houses.

As many locals and eyewitnesses of the city confirmed to STJ in December 2017, HTS aims, through that, to weaken the capacity of the Local Council in Saraqib as it is the sole and legitimate representative of the community, in addition to its position of rejecting any military dominance of the city's civil sector. It was that which led HTS to exert pressure on the Local Council and to rob all its revenues, in order to freeze and prevent it from providing services to the residents, in addition to HTS’s willingness to extend its control over the city, militarily and administratively.

On May 4, 2017, sponsor states of Astana Talks (Russia, Turkey and Iran) signed a Memorandum of Understanding for establishment of de-escalation zones in Syria. It included Eastern Ghouta in Damascus countryside, Idlib province and some parts of northern Homs, as well as some parts of adjacent provinces (Latakia, Hama, and Aleppo) and some parts of southern Syria.

Despite this agreement, many activists from Saraqib said that they have no information whether the city is included in de-escalation zone agreement or not.

On the other hand, the civil administration, elected by the community and represented by the Local Council, has been managing the city's affairs since July 23, 2017, despite HTS ‘s repeated attempts to control the city militarily[3] since July 21, 2017. According to STJ reporter, Saraqib is a demilitarized area, except for some young men who decided to join HTS, in addition to some HTS checkpoints located on its the outskirts.

“The Syrian General Conference”, held in Idlib Province on September 17, 2017, had formed a "Constituent Assembly /Constituent Body" ,to designate a new Head of the Government, resulting a concluding statement to form what they called the "Salvation Government" to run "liberated areas" in northern Syria.

Actually, the formation of the "Salvation Government" took place on November 2, 2017 during a conference conducted in the border area, Bab al-Hawa, and it was formed from 11 ministerial portfolios.

A map illustrates HTS-controlled areas in a part of Idlib Province and Aleppo countryside until the end of November 2017.

First: The Forcible Takeover of the "Potato Market"

On November 21, 2017, the Services Management, affiliated to HTS, forcibly seized the "Potato Market"[4] located in Saraqib. According to many sources, the importance of the Potato Market comes from being one of the most important investment sectors that support the Local Council to provide services to the city’s residents, specifically that it provide a financial return through the rent up to 25 shops inside it. According to STJ reporter, HTS’s Services Management has imposed control over the offices that organize the trade in the market, in addition to most of the market’s equipment that the Local Council had previously managed to secure at a cost of up to 5 million Syrian pounds.

According to STJ reporter, the Services Management affiliated to HTS, in doing so, aims to strip the Local Council of its powers and to control all the civil institutions affiliated to it in Saraqib. It also seeks to deprive almost (60) thousand inhabitants and around (17) thousand internally displaced persons, living in the city, from services and projects provided by the Local Council. 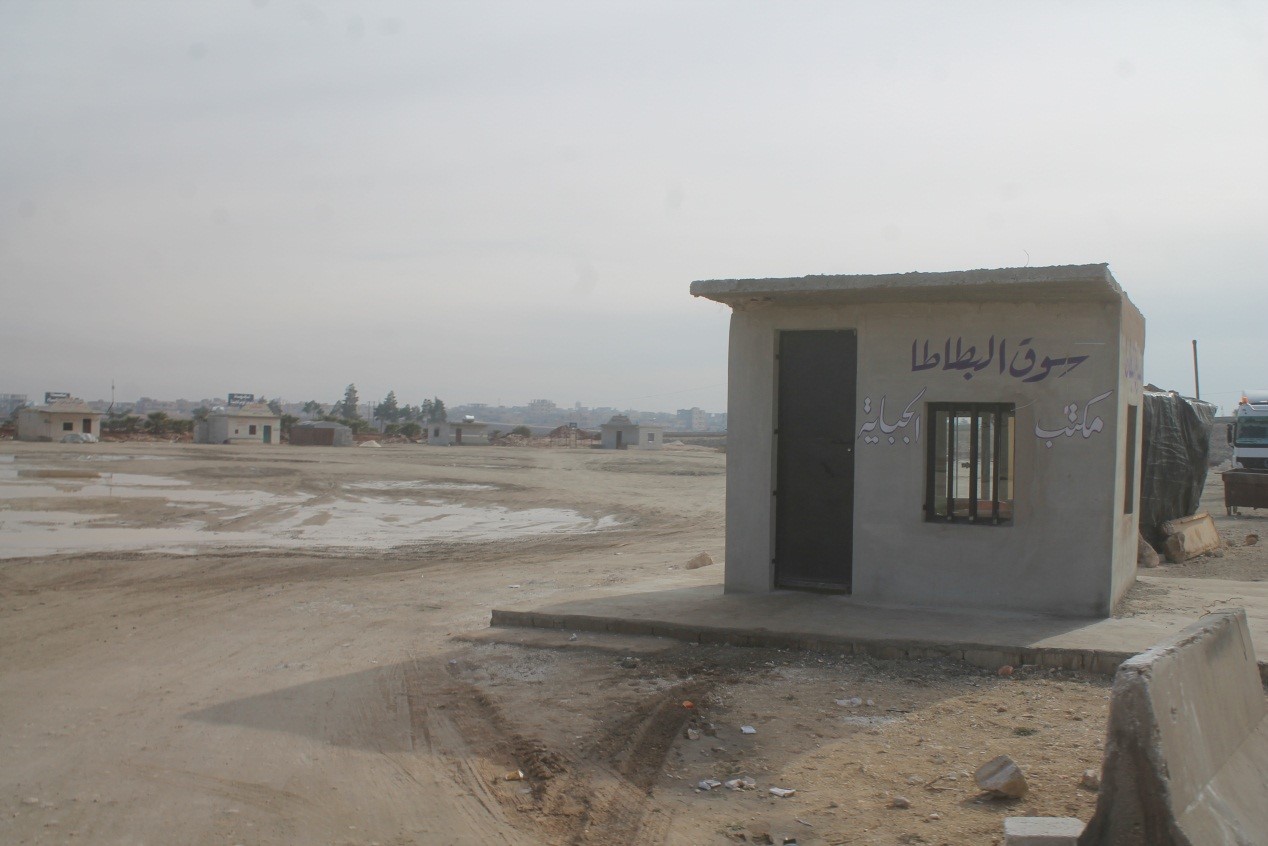 Images show a side of the Potato Market shops in Saraqib, taken on November 9, 2017.
Photos credit: STJ

"Hasan Haj Khalil", an alias of a native from Saraqib, spoke to STJ about seizing the Potato Market by HTS’s Services Management, saying:

"The seizure of the Potato Market outraged the people of Saraqib, since HTS’s control over those service institutions runs counter to the Local Government Act of the Local Council, which falls under the item (107) that provides for the affiliation of all service units to the Local Council. Not to mention that it causes losses to traders and detriments the people’s interests, since many of them will sell and buy potatoes from outside the market, as they don’t like to deal with HTS, and thus will lead to inflated potato prices generally in the city markets."

On October 1, 2017, a group of HTS fighters seized the Finance Service[5] of Saraqib, under the pretext of its violating the Islamic law, as those fighters stormed the facility of the Finance Service, dismissed all stuff members, and confiscated all documents and equipment in it including logistic materials, computers, devices and papers. Then they forced all the employees to get out of the building, closed it, and placed heavy security on it so that they could move papers and confiscations to an anonymous place, that was confirmed by Yusuf al-Sayed, an alias of a former Finance Service officer, where he spoke to STJ, saying:

"The Finance Service was working in cooperation with the Local Council in Saraqib, as it contributed to the revenue of the Local Council, besides around 100 thousand Syrian pounds used to enter to the Council’s treasury on a daily basis. The Finance Service stuff was about 25 employee, but after HTS seizing it, they became unemployed, as HTS’s Services Management forced them to leave their jobs and go back home."

Image shows a side of the Finance Service’s work in Saraqib prior HTS’s seizure on October 1, 2017.
Photo credit: STJ

According to STJ reporter, HTS has not only seized the Finance Service and Potato Market in Saraqib, but also imposed control over the Land and Civil Registry Service on October 8, 2017. It is well known that the Civil Registry documents all births, deaths, marriages and divorces in the city, and the Land Registry documents all commercial contracts and it archives most records electronically. The Land and Civil Registry Service is one of the most important services in Saraqib, which the citizen relies on first, and the Local Council next, as it secures a portion of the financial revenue that also enters the Local Council's treasury. In this regard, Riad al-Ahmad, an alias of a former Civil Registry stuff member, in Saraqib, said,
"We have worked in the Civil Registry for ten years, and have served citizens in Saraqib and its countryside. Our work was limited to the issue of identity papers for Syrian individuals and families, even when the regime forces were bombing the city during the past years, we were working hard to keep and archive these papers. On June 1, 2017, a project to support and automate these papers was implemented in cooperation with the Local Council of Saraqib and with the support of an organization called “Chemonics”.  This project included the provision of equipment, logistics and the payment of salaries to staff members who numbered about 40 employees. We have already started working on this project, but the control of HTS’s Services Management on the Land and Civil Registry in Saraqib, led to the cut of support for the project."

Following its seizure of the Finance Service and Land and Civil Registry in Saraqib, the Services Management of HTS seized the city's Water Unit on October 15, 2017. The Water Unit is the third civil service institution being controlled by HTS during October 2017 alone.

According to STJ reporter, the Water Unit is one of the most important service units working to provide services to people, as the number of beneficiaries of its services estimated to about 65 thousand inhabitants, both locals and displaced persons living in Saraqib. In this regard, one of Saraqib’s residents (Refused to disclose his name for security purposes) spoke to STJ saying:

"The Water Unit was providing services to the residents, in exchange for 1,000 Syrian pounds monthly per family. The Water Unit had three main pumps with 15 groundwater wells, as well as pumps and maintenance supplies. All of which are now under the control of HTS’s Services Management, which in turn works for its own benefit, as it imposed new monthly charges on the residents estimated at 1500 Syrian pounds per family although the water does not often reach residents’ houses. But the Local Council used to use "diesel" to pump water the houses"

According to STJ reporter, the bread bakery, supported by Ihsan Charity Organization, plus its electricity network and generators and the vehicle garage, are the only civil service institutions still administered by the Local Council of Saraqib.

STJ had earlier prepared a report on the seizure of several public and private properties by HTS, formerly al-Nusra Front, in Jisr al-Shughur, Idlib countryside.

[2] In July 2017, HTS began a serious phase of forming the "Civil Service Administration" in order to supervise all civil institutions in Idlib province, for more control over areas that rejected its military dominance over the civil sector, like Saraqib. The formation of this administration came after HTS’s control over the entire civil and military decision in Idlib, which is its future administration headquarter, being the main center and headquarter of all civil services in the province. HTS’s goal from the formation of this administration is to control fully all the civil services such as water, electricity, real estate, education, bread bakery, agriculture, education, among others. Moreover, HTS employed its agents in all institutions and gave them the power to make decisions, thus all institutions became under its direct administration.

[3]  STJ had earlier prepared a report on shooting demonstrators in Saraqib city by HTS during its attempts to control the city in July 2017.

[4]  The Potato Market houses several shops selling and buying potatoes in the city.

[5]  The Finance Service in Saraqib is responsible for charging fees for real state and civil transactions related to the work of Land and Civil Registry in addition to the documents relating to the civil court in the city. Every day, after the close of business, all financial income deposited in the treasury of the Local Council of Saraqib.

In Collusion with the “Syrian Government”, a Russian...