Image shows the child Mohamed Ma’amoun Darwish after his death in the heels of shelling Nasser Ash’osh elementary school in the town of Jisreen in Eastern Ghouta on October 31, 2017. Photo credit: Ghouta Media Centre.

On the morning of Tuesday, October 31, 2017, up to eight children were killed and others were injured as a result of shells felt on two schools in the besieged Eastern Ghouta in Damascus country side[1], one fell in Jisreen and the other in the town of Mesraba. According to Syrians for Truth and Justice/STJ/  reporter the artillery bombardment of Nasser Ash’osh elementary school in Jisreen killed seven civilians, the majorities were school children. Parallel with another bombardment on Shahid Soheil at-Taklah School in Mesraba, resulted in killing four civilians, including two pupils. As many eyewitnesses confirmed, the two incidents coincided with the end of the school hours, meaning, while the children were leaving their schools. 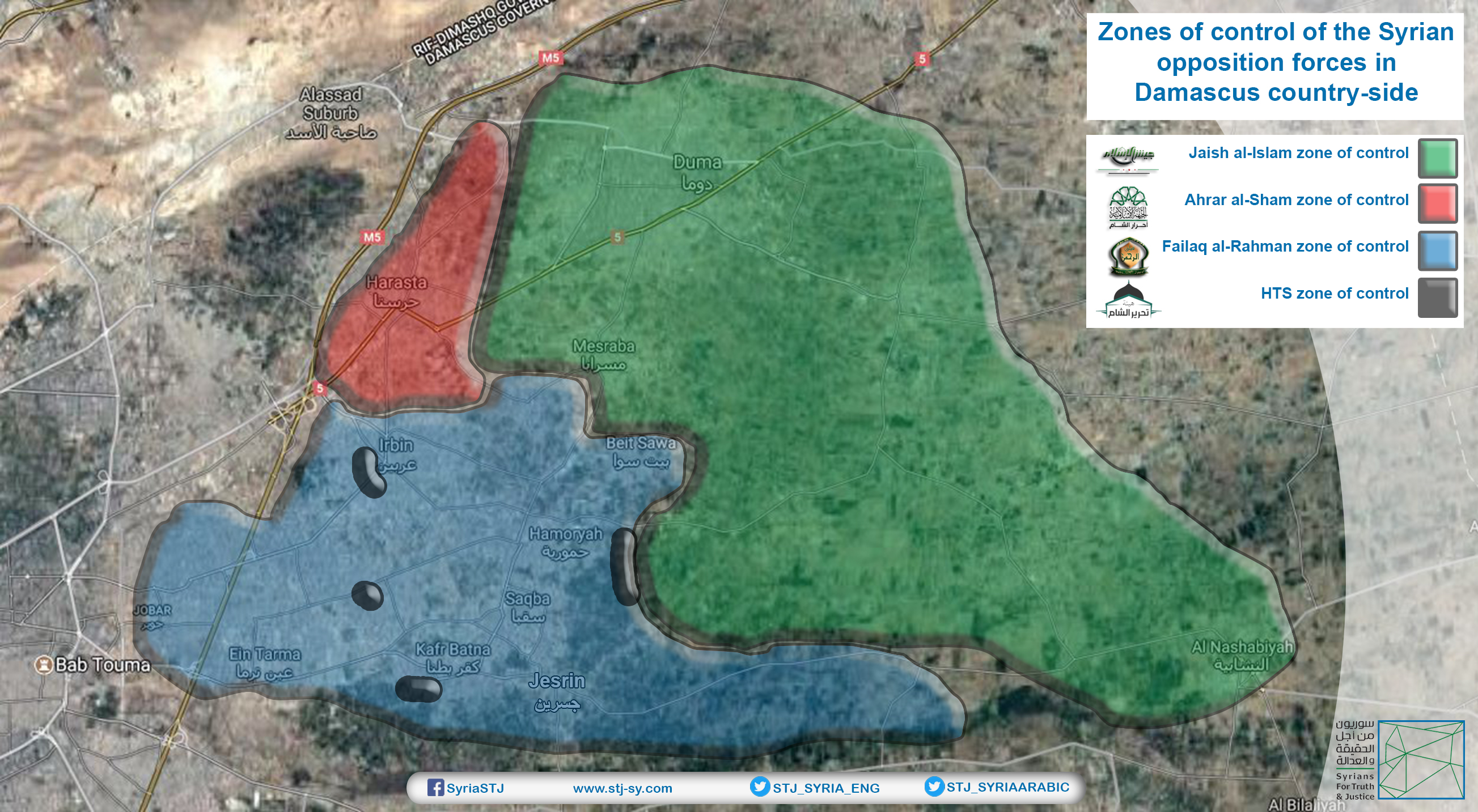 A map illustrate areas of control by opposition factions in eastern Ghouta until the beginning of November 2017.

At 10:30 a.m. on Tuesday, an artillery shell, believed to be from the Air Defense Administration in Al-Mleha area under Syrian regular army control, fell in front of the gate of Nasser Ash’osh elementary school in Jisreen under the control of Failaq al-Rahman[2]. The shelling left many dead and wounded among the pupils, which was confirmed by Mahmoud at-Talli, one of the town locals who was at the site at the time of the incident, spoke to STJ saying:

"A shell fell in front of the school gate while the students were leaving to their homes, we heard loud sound of the missile, followed by children’s voices shouting and screaming. I remember exactly how the kids were running in panic in every direction, some of them were seriously injured, and some lost their lives. The scene was awful and children’s pieces scattered all over the place. However, all I remember is that I tried to help as many children as I could, with the help of some neighbors, then all the children were transferred to hospitals, but because Syrian regime had already prevented entering fuel into Eastern Ghouta, ambulances were delayed in coming”.

Image showing some of the injured children as a result of the artillery shell on Nasser ' Ash’osh elementary school in Jisreen by the Syrian regular forces, on October 31, 2017.
Photo credit: Jisreen Media Office.

A video footage  published by Ghouta Media Centre, on October 31, 2017, showed one of the injured children receiving treatment at a medical center in Eastern Ghouta, as a result of shelling Nasser Ash’osh School in Jisreen.

Mohammad Kiwan, is in charge of a central ambulance point where the injured children were transferred to in Jisreen, spoke to STJ about killing five schoolchildren, and injuring close to 15 children, with severe and critical injuries, in this regard he continued:

“We did our best to save as many children as possible, we transferred some of those seriously injured to better equipped hospitals in Eastern Ghouta, despite that, one of them died, he was identified as Taher Muhammad Darwish, due to his wounds. However, lives of many of them are still threatened due to the lack of medicine and medical equipment because of the siege imposed on Eastern Ghouta. It should be noted that artillery bombardment that affected the school came only 24 hours after a humanitarian convoy accompanied by a delegation of United Nations entered Eastern Ghouta on October 30, 2017.”

According to STJ reporter, killing seven civilians was documented against the background of shelling Nasser Ash’osh School in Jisreen, the majority were children, they are:

According to STJ reporter, the artillery shelling on Nasser Ash’osh School in Jisreen coincided with another shelling on Shahid Soheil at-Taklah School, located in Mesraba, which is controlled by Army of Islam[3]. Anyway, on the same day, October 31, 2017, there were dead and injured among civilians as two mortar shells fell near that school, the matter that was confirmed by Amer al-Homsi, a Civil Defense member in Mesraba town, he spoke to STJ saying:

"At 11:00 a.m. the school was targeted by two mortar shells, likely from the Management of Military Vehicles in Harasta city held by the Syrian regular forces, while the children were leaving their school.  One of the missiles fell right behind the school not more than 20 meters, the other was in front of the school gate about 50 meters, those missiles killed four civilians on the  spot, two were school children. Some of them were the child Mohammed al-Kholi, and his father, as well as a person identified as Abu Fahd Anees and a girl child called Baraa. We dispatched many of the wounded, including an old woman who was seriously injured and her hand was cut off."

Image of a child died as a result of shelling Shahid Soheil at-Taklah School in Mesraba by the Syrian regular forces on October 31, 2017.
Photo credit: Ghouta Media Center.

In his turn, the Civil Defense in Damascus countryside documented killing four civilians including two children, as a result of shelling Shahid Soheil at-Taklah school in Mesraba, they were:

STJ field researcher believes that there is a systematic and deliberate method in targeting schools on that day, firstly, owing to coincidence of the two incidents, and secondly, the shells fell very close to the schools as well, and the reasons could not be known. It is worth mentioning that the regime alleged that missiles fell on Dwel’a and Bab Tuma areas in the capital Damascus came from armed opposition sites.

It is noteworthy that on May 4, 2017, sponsor states of Astana talks (Russia, Turkey and Iran) signed a Memorandum of Understanding for establishment of de-Escalation zones in Syria, it included Eastern Ghouta in Damascus countryside, Idlib province and some parts of northern Homs, as well as some parts of adjacent provinces (Latakia, Hama, and Aleppo) and some parts of southern Syria. One of the most prominent items is cessation of hostilities between conflicting parties and creation conditions for access medical aids.

On July 22, 2017, the Army of Islam participated in signing de-Escalation zone agreement in Syria, followed by Failaq al-Rahman, on August 18, 2017, as the Russian side and Failaq al-Rahman agreed to cease fire and continue to fight al-Nusra Front as well.

[1] Syrian regular forces imposed a suffocating siege on Eastern Ghouta cities and towns since late 2013 until the time of writing this report.

[2] At the beginning of August 2012, formation of the Al-Baraa brigade, led by dissent captain "Abdel Nasser Shammeir", hails from Homs province, was announced.  At the end of the year 2013, it expanded, with the announcement of the formation of Failaq al-Rahman that included Syrian armed opposition brigades, some of them were Abu Musa Al-Ash'ari Brigade, Liwa Shuhada Al-Ghouta, Ahl al-Sham Brigades, al-Liwa al-Awal in Qaboun and Tishreen neighborhood, and Al-Adiyat Brigade in Western Ghouta. According to several sources, Failaq al-Rahman has about 9,000 fighters; it gains its influence from its controlled sites in the neighborhoods of the east of Damascus, in Jobar and Zamalka, and is considered the second largest opposition military faction in Ghouta after Army of Islam.

[3] On September 2011, Zahran Aloush announced the formation of the opposition Battalion of Islam, which became Liwa al-Islam in mid-2012, and on September 29, 2013, he announced the formation of the Army of Islam by uniting dozens of factions and brigades in his own entity, and later in the same year joined the Islamic Front, It is currently active in the Eastern Ghouta region.