The journalist, Khaled al-Shami, known as "al-Omari", descended from Hamoryah city located in Eastern Ghouta in Damascus countryside, began working in the field of media following his return from Turkey in 2012. He started working for “al-Marifa Organization for Development and Education”, and then he worked as a photographer for "Youth for Syria" Organization and became in 2014 the director of the media office of “Zeyd bin Sabet Derneģi” (civil foundation).

The second round of military confrontations among the armed opposition factions in Ghouta, between Failaq al-Rahman and al-Nusra Front on the one hand and Jaish al-Islam on the other hand, led in one way or another to the dismemberment of Eastern Ghouta.  Military checkpoints were installed for each faction in its areas of influence[2] in order to control and prevent the infiltration of other faction’s troops. The dismemberment oppressed the civilians, in addition to obstructing the work of humanitarian, relief, medical and other organizations and institutions.

The last months did not pass without military skirmishes between rival factions in Ghouta, the latest occurred on Thursday 14 September 2017, when Khaled al-Shami was injured by mistake when he was with a number of his fellows, according to the testimony of one of his companions and media persons. Agents of Failaq al-Rahman shot at other persons suspected of belonging to Jaish al-Islam, in the outskirts of Hamoryah (the buffer zone between the two factions, located between Hamoryah and Mesraba), where Khaled al-Shami lay in hospital until 16 September 2017 and died as a result of the injury.

A companion to Khaled al-Shami spoke to STJ about the circumstances of the incident:

"We were on our way back, the media man Khaled al-Shami, some colleagues and me, there were about 10 of us, in an area between two military checkpoints of Jaish al-Islam and Failaq al-Rahman. At that moment, specifically in the direction in which we were walking, there were other agents whom we did not know to which faction they belong, but suspected to be from Jaish al-Islam, after that, some agents of Failaq al-Rahman called them, but they did not respond, so they were shot. The target was not the colleague Khaled as some promoted. However, the suspects fled, and because we were with them in the same direction, the shooting was toward us too, therefore, a mistaken bullet in the pelvic affected him when he was in the car; he was taken to the hospital and underwent a surgery… " 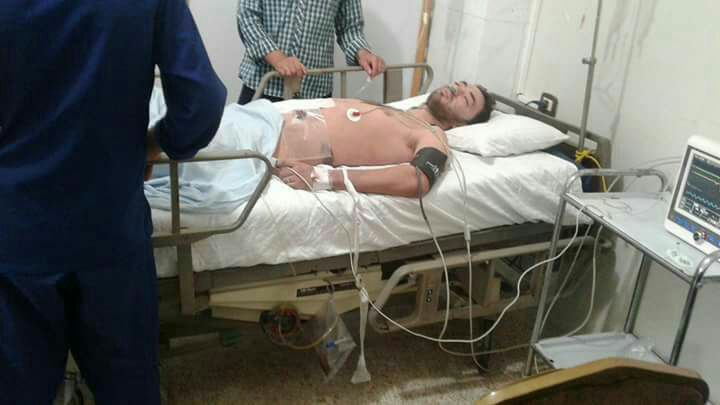 Image of the journalist, Khaled al-Shami in the hospital after being shot
Released by: Telegram Channel in Damascus and its countryside correspondence Tuesday, 16 September 2017.

Media Workers Association East Ghouta issued a statement condemning the reckless use of weapons among civilians and demanding accountability of those responsible for the injury of the journalist Khaled al-Shami. 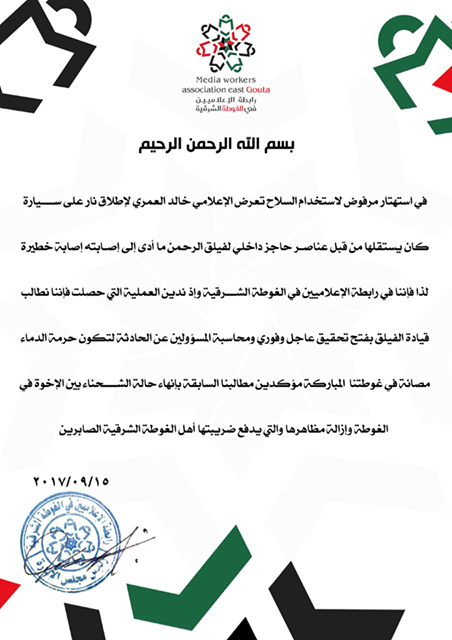 Despite the stability of his health condition, we were shocked by the announcing of his death on Saturday afternoon16 September and on the same day his funeral got out from al-Khawlani mosque in Hamoryah following the afternoon prayer. 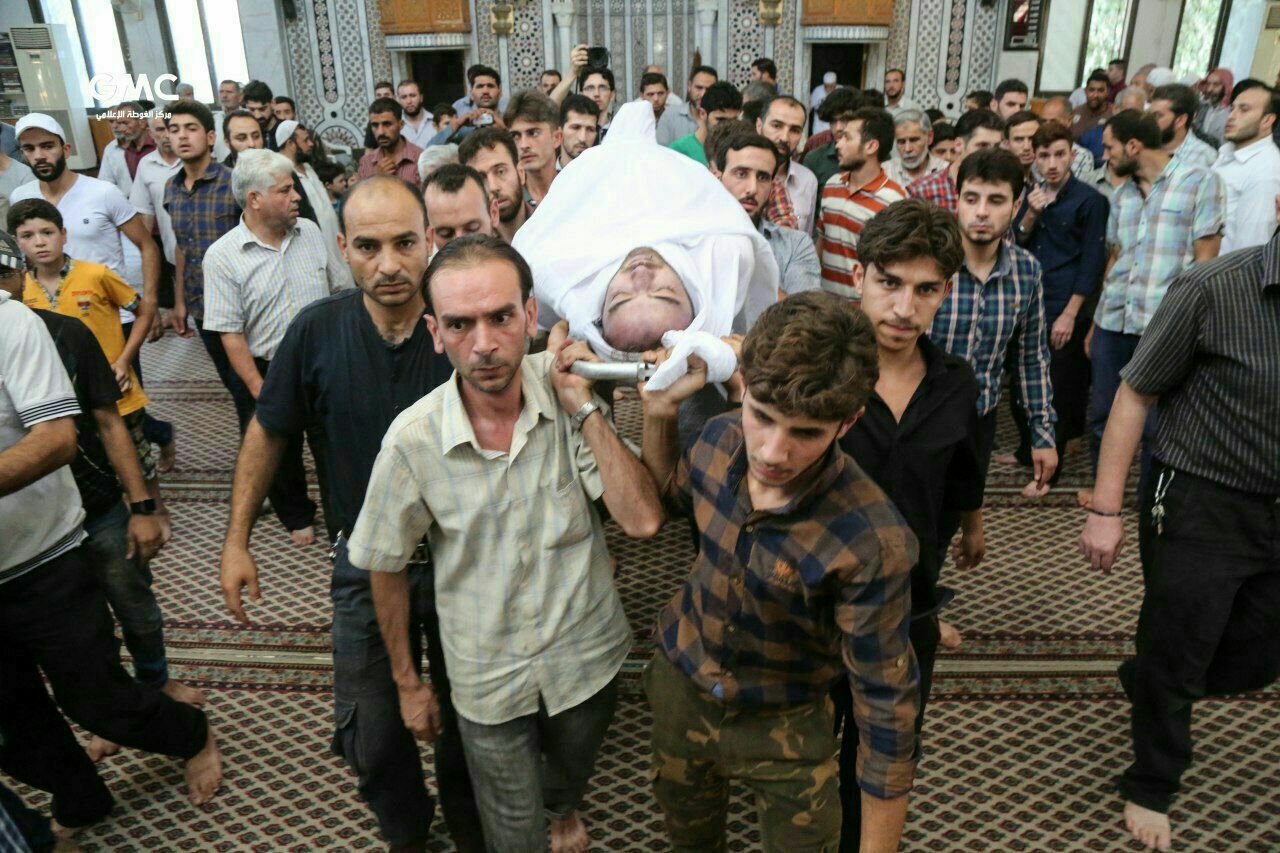 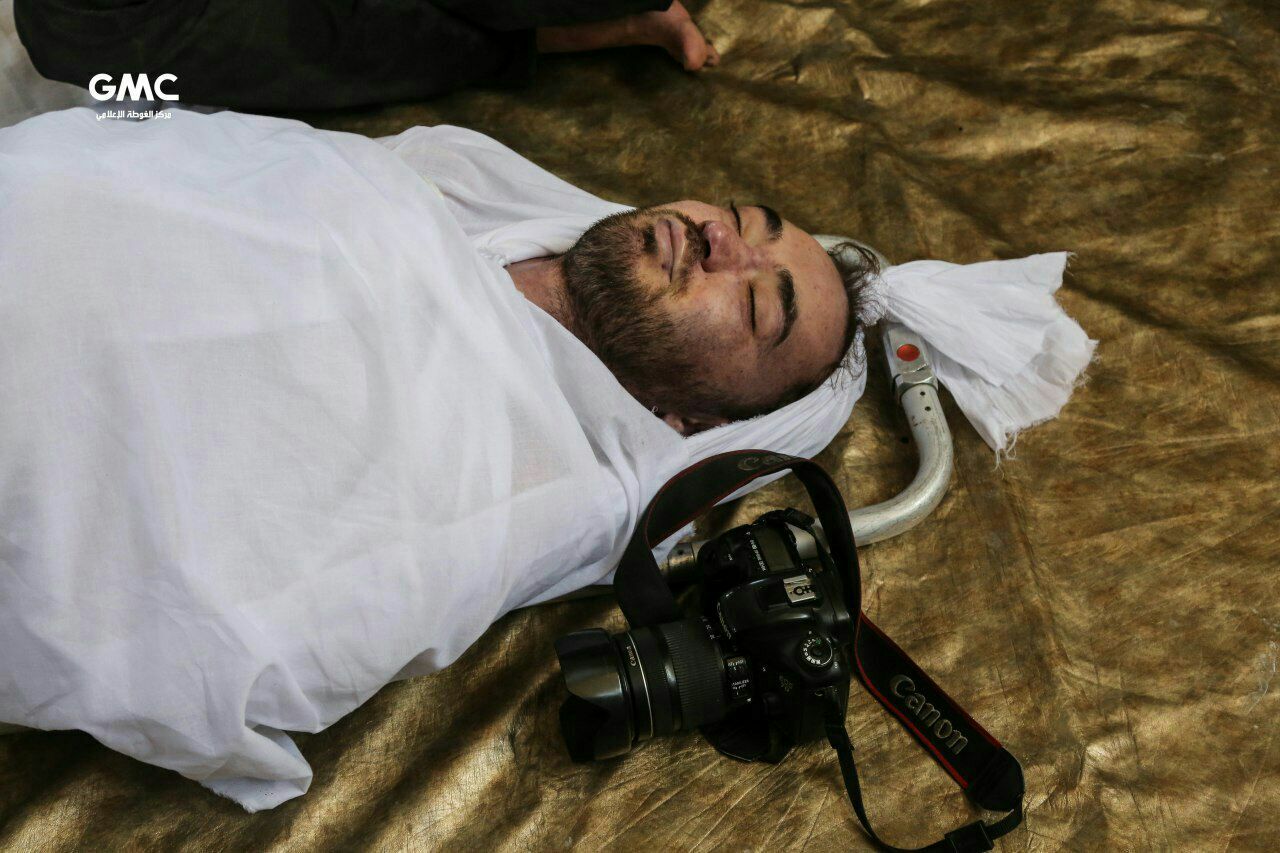 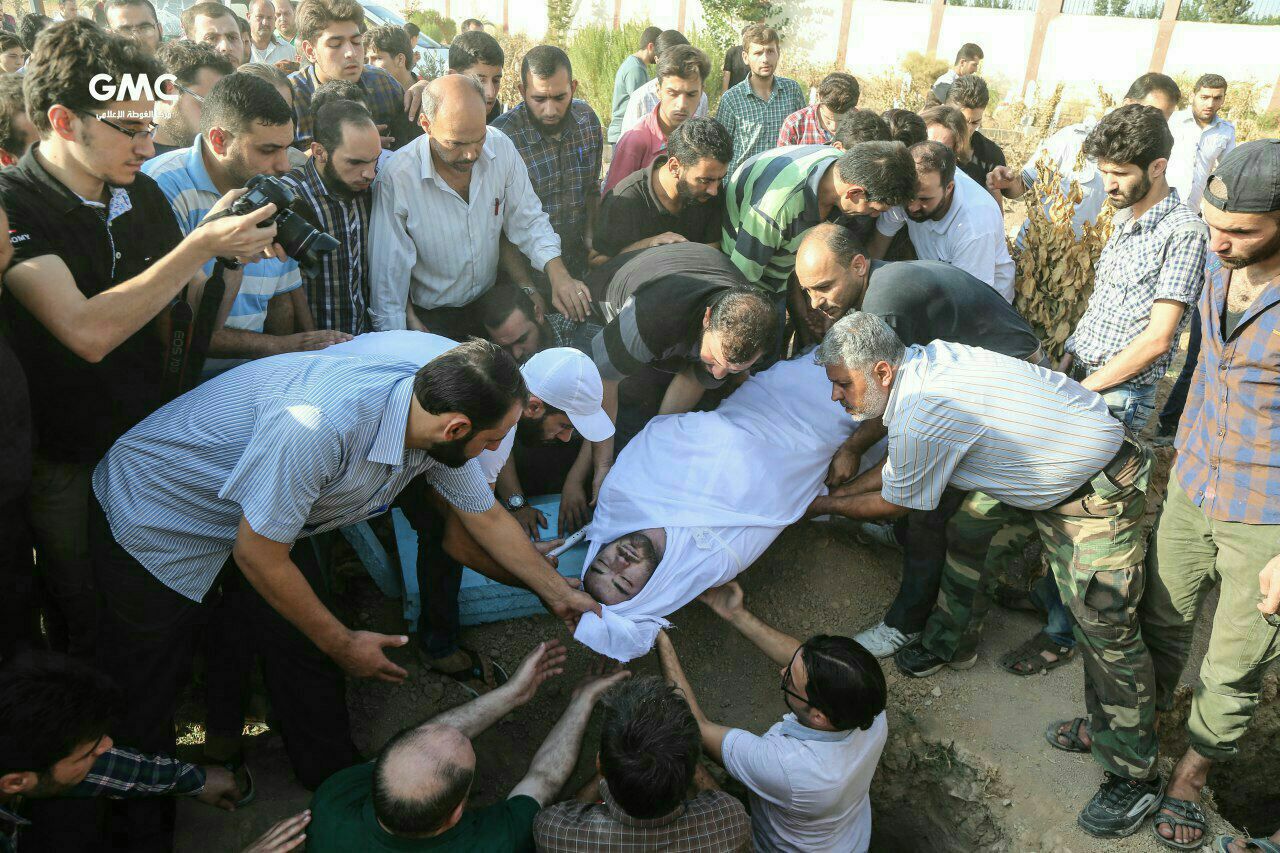 Killing of the media man Khaled al-Shami was not the first in media; similar incidents occurred previously when media personnel were subjected to kill or arrest[3], the reason that grew popular outrage and congestion among civilians in general and among media workers being personnel or institutions in particular. Denunciations followed by media professionals who believed that the agents were not to shoot without orders from the leadership, thus bearing it the responsibility of what is happening on the ground, therefore, issued statements denouncing such practices against media professionals. In this context, The Media Workers Association East Ghouta demanded Failaq al-Rahman to assume its responsibilities and account the perpetrators. On the other hand, Failaq al-Rahman responded through its spokesperson Wael Alwan on Twitter that Failaq al-Rahman offers condolences to the family of the deceased, stressing that the two agents involved in the shooting would be brought to justice, according to Eldorar AlShamia News Network, without indicating other details. 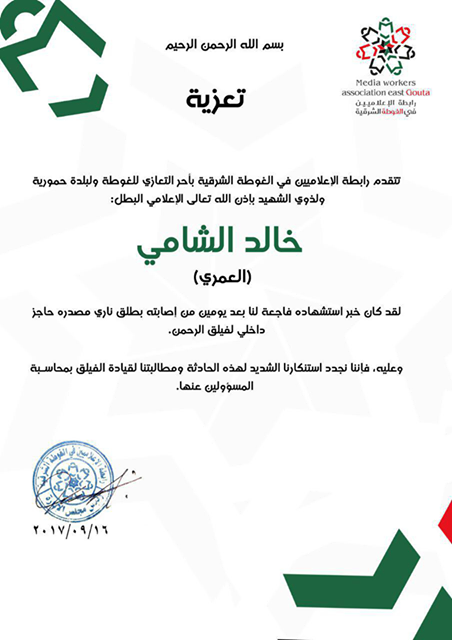 Image of the statement issued by the Media Workers Association in which it condemned the reckless use of weapons by Failaq al-Rahman agents.

Zeyd bin Sabet Derneģi Foundation also issued a statement on Saturday 16 September, mourning the director of its media office, and condemning the media professionals’ exposure to such violations. 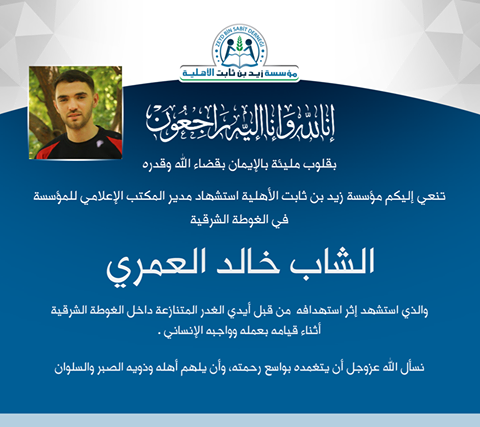 [1] One of the sources told Syrians for Truth and Justice-STJ that the total deaths in the military confrontations between the 2 factions during 2016 and 2017, had exceeded one thousand being dead or wounded, but STJ could not document all names of the dead according to its accepted methodology in documenting names of deaths of the Syrian conflict.

[2]   Failaq al-Rahman controls areas starting with Madyara, Hazeh, Erbin, Hamoryah, Saqba, Kafr Batna, Jisreen, Jobar, Zamalka, and Ein Tarma but after the join of al-Nusra Front and Fajr al-Umma which control the areas of Harasta and some of al-Ash'ari farms, these areas became part of Failaq al-Rahman-controlled regions as well. On the other hand, Jaish al-Islam controls the areas of Mesraba, Duma, and a part of al-Ash'ari farms, as well as al-Shifuniyah and al-Nashabiyeh side.

[3] This incident was preceded by the arrest of Muneeb Abu Taim, a repoter of Damascus Media Center, by Jaish al-Islam 22 August 2017, without explaining the reasons. His arrest continued until 10 September 2017.