Trucks passing through the Bab al-Hawa Border Crossing from the Syrian side. Taken on: March 2019. Photo credit: STJ.

On January 10, 2019, Hayat Tahrir al-Sham/HTS[1] has militarily taken over the full range of Idlib province, in addition to massive areas in western rural Aleppo and northern rural Hama[2] while the Salvation Government[3], its affiliate, controlled all the public and service utilities in the same areas. Under these conditions, HTS took hold of and started running the international crossings and internal checkpoints that separate the areas under its rule from the control territories of both the Syrian regular forces and the National/Free Syrian Army[4].

The field researchers of Syrians for Truth and Justice/STJ have monitored the crossings and the checkpoints in the HTS-held areas, which witness the passage of civilians, domestic and international commercial flow. They have also interviewed several local merchants, who have all stressed that HTS is being paid “hefty” sums of money for every time they take commodities in and out of its areas of control.

According to the merchants, the Bab al-Hawa Border Crossing with Turkey demands a sum that varies between 5 and 35$ per ton, depending on the passing commodities, except for agricultural materials which head from Syria to Turkey, where the demanded fee has been canceled. Media reports noted that all the crossing’s revenues are forwarded to “the civil administration affiliated with HTS, under a cover of civil foundations.”[5] In the case of the checkpoints, used for purposes of trade between the HTS-controlled areas and those held by the Syrian Government/Damascus, no fees, taxes, royalties or pays have been defined as fixed, for each of the checkpoints asks for a certain wage based on the type of the passing goods and the time they pass. However, the average earnings swing between 5 and 30$ per ton, fuel included. The fees might rise to 350$ when the passing car is loaded with marble designated for construction. As for the checkpoints separating the areas taken over by HTS and those held by the National Syrian Army/Armed opposition in north-western Aleppo, no proof has been attained that any money is being paid.

STJ’s field researcher reported that, upon passing through the Bab al-Hawa Border Crossing, merchants receive a receipt, providing a proof of the money they paid. In the case of internal checkpoints, however, only a few merchants have been given such receipts, where the money is paid to militants directly.

The crossing is allocated for commercial purposes and the passage of civilians from/to Turkey. Lately, a new temporary manager has been assigned, following the contradictive news about the resignation or the dismissal of its former manager Khalid al-Brad, dubbed Sajid Abu Firas. This came after talks about his being a subject to pressure by HTS, which is the real body in control of the crossing, running it through a “civil façade”, after it took it over in June 2017 in the wake of its confrontations with Harakat Ahrar al-Sham al-Islamiyya/Ahrar al-Sham.

The new manager, media reports indicate, is born in Idlib province and called al-Mugheerah. While a security official of HTS, he has economic responsibilities as well. But still, neither HTS nor the administration of Bab al-Hawa Crossing has officially announced assigning al-Mugheerah. The administration has actually made an official statement on March 22, 2019, in which it appointed Mohammad Zaid ed-Din as a manager, who was named in an exceptional session held by the crossing’s administration members.

It is a military crossing used by Turkey for bringing its forces into the observation posts in Hama and Idlib. The crossing is located in the HTS-held areas, but al-Sham Legion, operating under the National Syrian Army/Armed opposition, is stationed in front of the crossing and has several checkpoints in its vicinity.

As a civil crossing, Atmeh was designated for transporting humanitarian cases with health-related issues to Turkey and for bringing humanitarian aid into the area. Nonetheless, all operations through it have stopped in 2016, and the crossing is today a post for al-Sham Legion, which operates under the National Syrian Army/Armed opposition.

It is a military crossing deployed by Turkey, through which it dispatches forces to observation posts in Hama and Idlib. The crossing is under the immediate supervision of HTS.

The al-Derye village is monitored as being the assembly point for people wishing to enter Turkey illegally. Through it, the smugglers pass to Turkey, in coordination with HTS, which controls the village and runs the smuggling operations conducted there, via its affiliated Western Sector/Border Security. 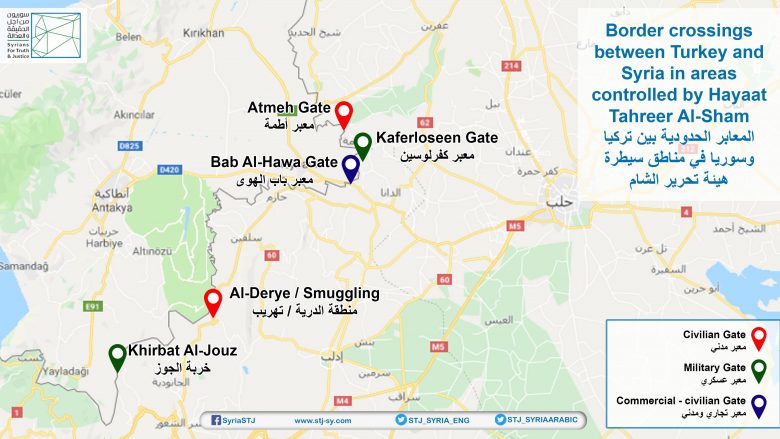 A map indicating the locations of the border crossings with Turkey.

2. Domestic Checkpoints between Areas Held by HTS and those by the National Syrian Army/Armed Opposition

This checkpoint has been established by HTS after it controlled several cities and towns in western rural Aleppo[6]. Located at al-Ghazawieh, off the Sema’an town, it is preserved for the civilians’ passage and commercial flow.

HTS set up this checkpoint after it took over numerous cities and towns in western rural Aleppo[7]. Located on the outskirts of the Der Balout town, adjacent to Idlib province’s administrative borders, it is being used for the passage of civilians and commercial purposes. 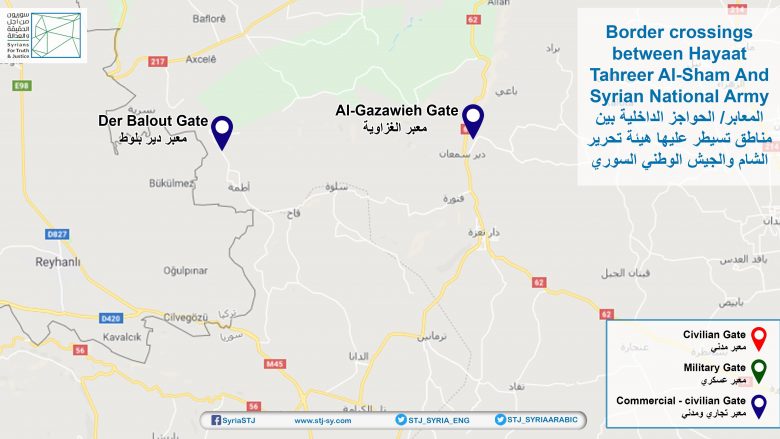 A map indicating the location of the checkpoints between the areas held by HTS and those controlled by the National Syrian Army/ National Coalition for Syrian Revolutionary and Opposition Forces.

3. Domestic Checkpoints between the Control Areas of HTS and the Syrian Governmental Forces:

Located to the west of Aleppo city, HTS has direct control of the checkpoint. Through it, prisoners’ swap deals are conducted. In 2016, the checkpoint was also used for the evacuation/displacement operations from the eastern neighborhoods of Aleppo city, while it stands closed on the side of the Syrian regular forces in the present time.

It is located in western rural Idlib. The checkpoint is under the immediate supervision of the al-Sham Legion and is run by the Russian forces on the side held by the Syrian Government, which opens and closes it at intervals for purposes of trade and to allow the passage of civilians.

The checkpoint, controlled by HTS, is located in northern rural Hama and is designated for trade mainly. It is also opened and closed at intervals on the side of the Syrian regular forces.

The checkpoint is located in north-western rural Hama and is utilized for the passage of civilians and some commercial activities. HTS took it over from Ahrar al-Sham, and it is opened and closed at intervals on the side of the Syrian regular forces. 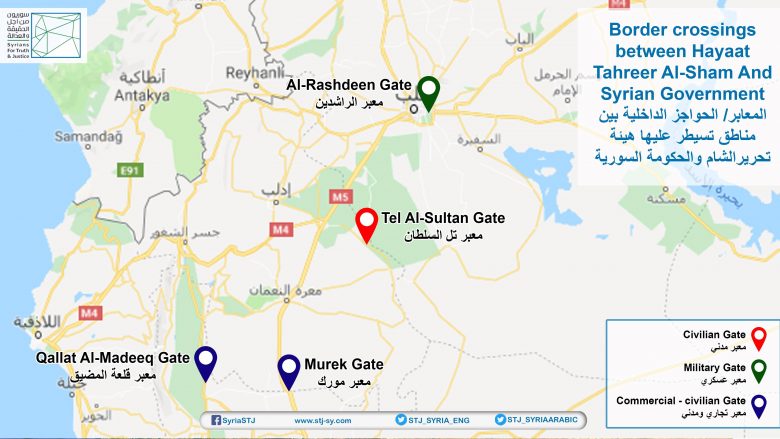 A map indicating the location of the checkpoints between the control areas of HTS and the Syrian regular forces.

[1] On January 28, 2017, several jihadist factions in Syria’s north announced integration under “Hay’at Tahrir al-Sham/HTS”. The factions that dissolved themselves and joined together under the new name were (Jabhat Fatah al-Sham-previously known as al-Nusra Front- Nour al-Din al-Zenki Movement, Liwa al-Haqq, Ansar al-Din Front, al-Sunna Army). Nonetheless and due to the confrontations that broke out between the Ahrar al-Sham Movement and HTS on July 15, 2017, the Nour al-Din al-Zenki Movement announced its separation from HTS on July 20, 2017.

[3]On October 7, 2017, the formation of the “Salvation Government” was announced as to run Idlib province and the areas under the control of HTS. The Salvation Government has emerged from a “Constituent Assembly,” which, in its turn, resulted from the “General Syrian Conference” that HTS called for on September 17, 2017, and all the sessions of which and that of the Government’s foundation, were conducted in Bab al-Hawa, a border crossing with Turkey.

[4] On December 30, 2017, the Staff of the Ministry of Defense, under the Syrian Interim Government, announced the formation of the National Syrian Army, which consists of three divisions: The National Army Legion, the al-Shamiah/Levant Front Legion and the Sultan Murad Division. Afrin district has been lately added to the areas where the formed body operates – northern and north-eastern rural Aleppo.