In the period between December 4, 2018 and January 10, 2019, the Hay'at Tahrir al-Sham/HTS[1] has militarily controlled the full range of Idlib province in Syria’s north, except for the two cities of Ariha and Maarrat al-Nu'man. It also, militarily, took over cities and towns in western rural Aleppo and northern rural Hama, following the military clashes that involved it and armed opposition groups, namely the “Ahrar al-Sham al-Islamiyya” movement and the “Nour al-Din al-Zenki” faction.  These clashes ended with the opposition faction’s dissolving themselves in the regions they lost and the withdrawal of their remaining part towards regions in northern rural Aleppo, the city of Afrin in particular.

Between the 4th and 8th of January 2019, Syrians for Justice and Truth/STJ field researchers, in Idlib province, western rural Aleppo and northern rural Hama, met several of these regions’ residents and civilian witnesses, who reported further details about HTS having military control over the regions that formerly armed opposition groups controlled. The information was thus:

In Idlib province, HTS seized most of the province; its military forces entered its cities and villages, while the “Salvation Government/HTS arm in management of services”[2] assumed responsibility for service-related and administrative affairs, except for the two cities of Ariha and Maarrat al-Nu'man, which HTS military force did not enter and where the armed opposition groups, dissolved in the National Front, stayed. However, the two cities were declared as also bound to the “Salvation Government,” administratively speaking and in relation to services, under an agreement, reached on January 10, 2019, by the two military sides to the confrontations. The agreement provided for these terms:

Concerning northern rural Aleppo and the region of al-Ghab Plain, STJ filed researcher there monitored the military status and contacted residents and eye witnesses who reported that HTS started its attack on the region on December 4, 2018, upon which it took over the town of Qastun, which was controlled by the two factions of “Ahrar al-Sham” movement and “Suqour al-Sham Brigades/ Sham Falcons Brigades,” functioning under the “National Front for Liberation.” And then, on January 8, 2019, HTS brought in heavily armed militias and controlled the strategic villages of Qalidin, Duqmaq, al-Ankabawe and al-Amqiyah, where major posts of the two armed opposition groups are located, following confrontations between the two sides that resulted in fatalities on both sides. Due to this, the heads of some of the regions’ tribes played the mediator between the two, as to stop the fighting and spare the civilians its consequences. The two sides reached an agreement that provided for HTS control of the complete region of al-Ghab Plain- considered a key strategic and economic region, as it links the control areas of the Syrian regular forces and Idlib province- and dissolving the “Ahrar al-Sham al-Islamiyya” movement entirely, in addition to surrendering its medium and heavy arms and the departure of its fighters from the region to the city of Afrin, Aleppo.

Under this agreement, all the service-related and administrative affairs in northern rural Hama and al-Ghab Plain were similarly bound to the “Salvation Government,” while allowing for the military presence only, without management of the regions, of the “Jaysh al-Izza/ Army of Glory,” “Jaysh al-Nasr/Army of Victory” and “AL-Nokhba Army/ Elite Army,” affiliated to the Free Syrian Army/armed Syrian opposition, along with HTS.

In western rural Aleppo, residents and eye witnesses informed STJ field researcher that HTS, early 2019, controlled the city of Darat Izza and strategic villages that the “Nour al-Din al-Zenki” movement used to be in control of, after the clashes that broke out between them. The villages are Anjara, al- Houneh, Babis, Ma'arat al-Artiq, Arab Fatton, Bazhar, Jamiat Barakat, Rif al-Muhandiseen, Deir Samaan, Qalaa Atharia and the strategic Shaykh Barakāt mountain, which are all considered the link between Idlib province and Afrin region. On January 5, 2019, the militias of “al-Zenki” withdrew from the villages towards Afrin, after the movement dissolved itself in the region. On January 6, 2019, HTS also controlled the city of Atarib, after the city’s renowned personalities played the mediator and conducted an agreement with it as to stop it from storming the city.

All the above-mentioned regions of western rural Aleppo are now bound to the “Salvation Government,” administratively and in terms of services and are militarily under the control of HTS, without any other military force on the ground.

Covering the clashes, STJ issued a report on the civilian casualties, who died as a result of random shootings, during the confrontations that HTS undertook against armed opposition groups in both Idlib and Aleppo. [3]

Below, there are images showing the agreements that HTS conducted with several civil and military sides in the provinces of Aleppo, Hama and Idlib. 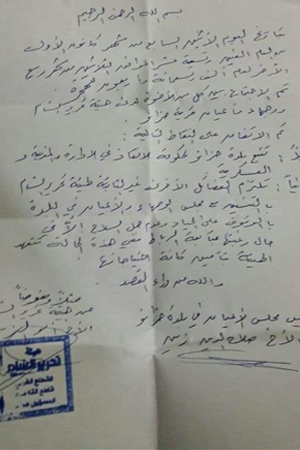 Image showing the agreement between the renowned figures of Hizano village and HTS representatives, under which the region is surrendered to the Salvation Government, administratively and in relation to services. 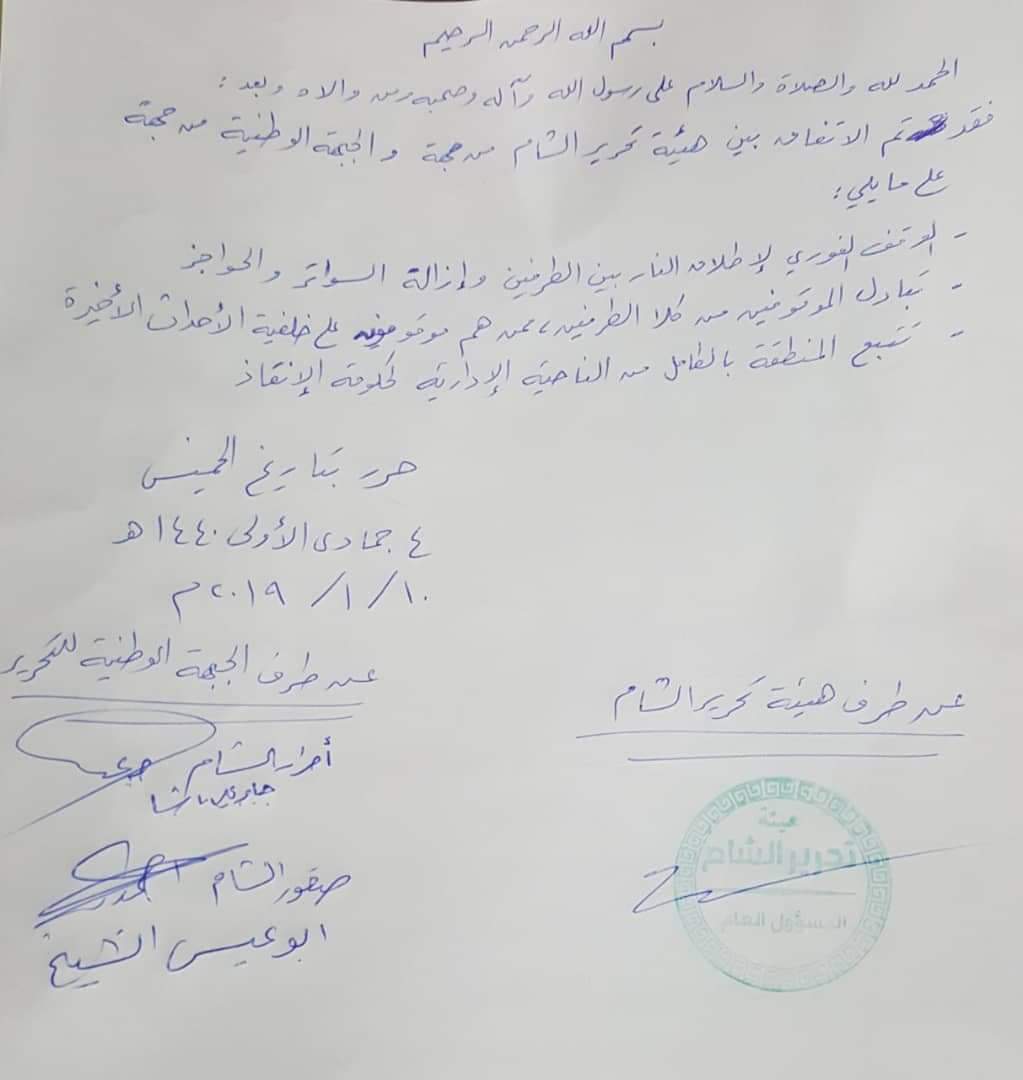 Image showing the agreement between HTS and the sides to the National Front, concerning the affiliation of the two cities of Ariha and Maarrat al-Nu'man to the Salvation Government. 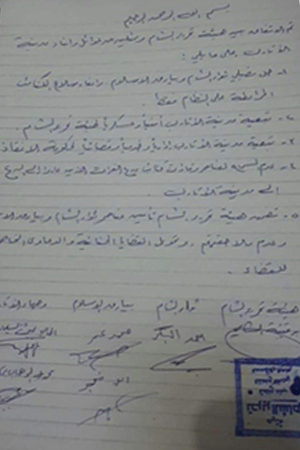 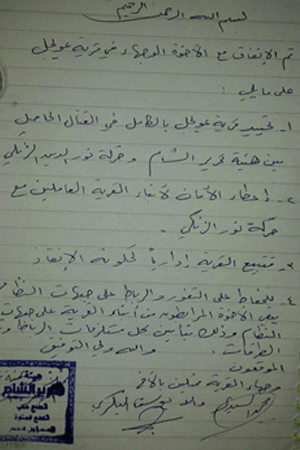 Images of other agreements conducted by HTS and sides opposing it.

[1] On January 28, 2017, several jihadist factions in Syria’s north announced integration under “Hay'at Tahrir al-Sham/HTS”. The factions that dissolved themselves and joined together under the new name were (Jabhat Fatah al-Sham-previously known as al-Nusra Front- Nour al-Din al-Zenki Movement, Liwa al-Haqq, Ansar al-Din Front, al-Sunna Army). Nonetheless and due to the confrontations that broke out between the Ahrar al-Sham Movement and HTS on July 15, 2017, the Nour al-Din al-Zenki Movement announced its separation from HTS on July 20, 2017.

[2] On October 7, 2017, the formation of the “Salvation Government” was announced as to run Idlib province and the areas under the control of HTS. The Salvation Government has emerged from a “Constituent Assembly,” which, in its turn, resulted from the “General Syrian Conference” that HTS called for on September 17, 2017, and all the sessions of which and that of the Government’s foundation, were conducted in Bab al-Hawa, a border crossing with Turkey.