The blast took place on January 16, 2019; it targeted the US-led coalition patrol/ meeting and was adopted by the Islamic State

The damage caused by the explosion that targeted US-led Coalition soldiers in the al-Umaraa Restaurant in the city of Manbij, Aleppo province. Taken on: January 16, 2019. Photo credit: Activists.

On January 16, 2019, a suspected suicidal explosion rendered 31 civilians and militants, including US-led coalition soldiers, either dead or injured in the city of Manbij, Aleppo province. The organization referring to itself as the Islamic State/IS, while dubbed Daesh, adopted the incident while investigations are yet run, according to testimonies obtained by Syrians for Truth and Justice/STJ.[1]

The explosion, the causes of which were not identified to the time this report was written, took place on January 16, 2019, at noon. A video recording, from a surveillance camera in the street, captured the explosion’s moment, which happened at the door of the al-Umaraa restaurant, in the presence of the US-led coalition soldiers, elements of the Manbij Military Council and civilians inside the restaurant, causing the death of four U.S. soldiers, two of the Manbij Military Council and seven civilians, in addition to the injury of four soldiers of the US-led coalition, two of the Council and 13 civilians, the latest report on the explosion’s toll shows as a local media outlet[2] stated quoting a medical source in the city of Manbij. 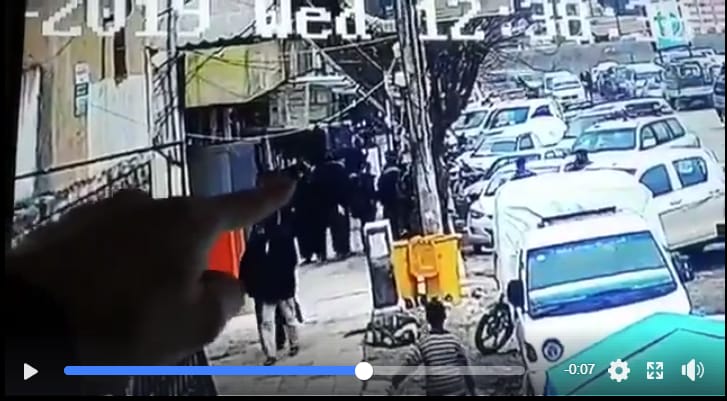 A shot taken from a surveillance camera’s recording, showing the location and the date of the explosion that hit the city of Manbij, Aleppo province, on January 16, 2019. 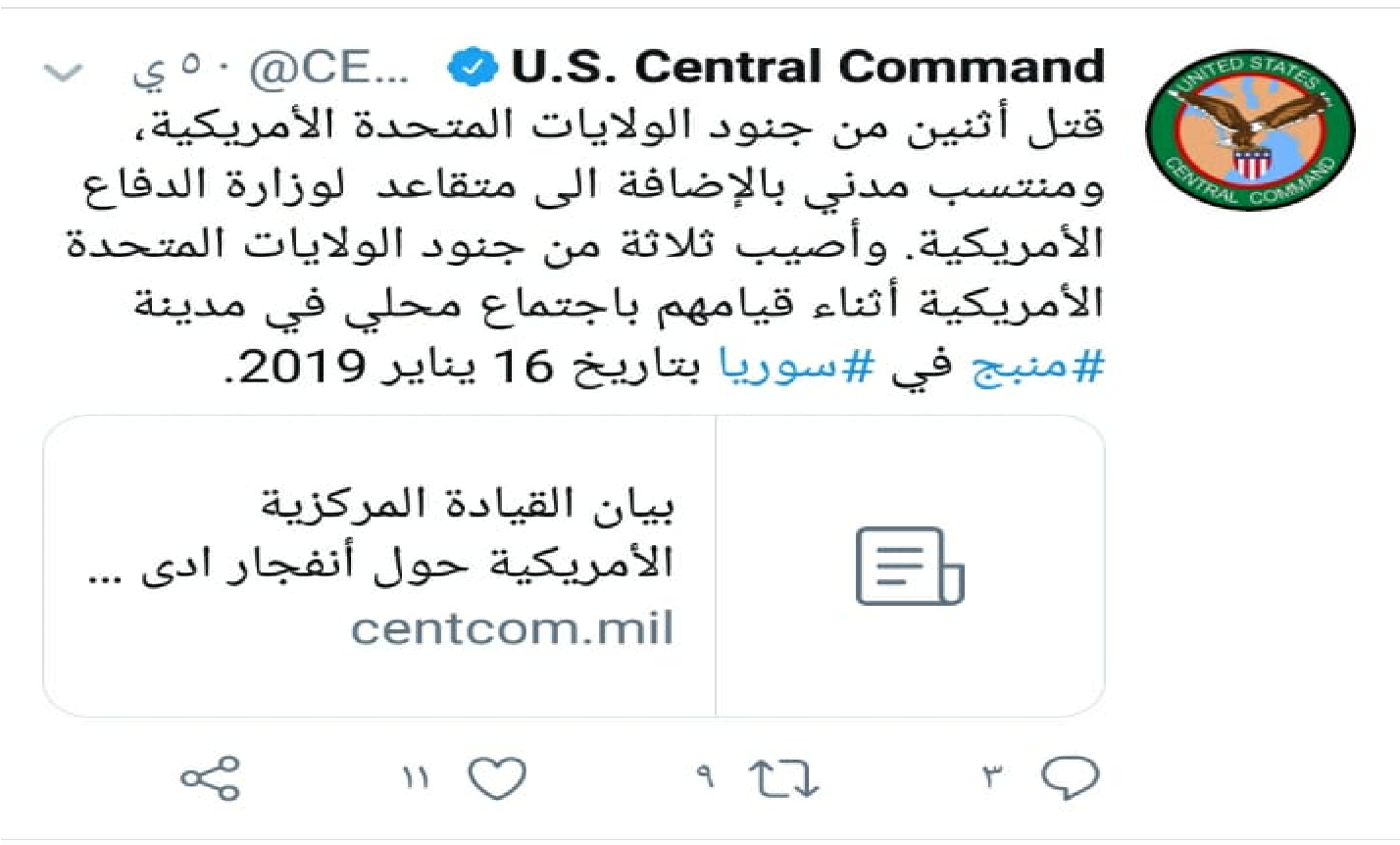 Copy of the U.S. Central Command’s statement on the blast which took place in the city of Manbij, causing the death and the injury of U.S. soldiers.

STJ contacted an informed military source in the city of Manbij, who referred to himself as T.K. He said:

“The US-led coalition soldiers are used to having lunch at the al-Umaraa restaurant, where the explosion took place. The bombing happened at the restaurant’s door. We believe that Daesh’s adoption of the explosion is sham because the statement posted by Amaaq Agency is dated according to the Gregorian calendar, which the organization never uses.”

Copy of the statement posted by Amaaq agency, claiming the bombing in the city of Manbij, where the Gregorian calendar has been used.

A civilian, based in the city of Manbij and refusing to reveal his name for security considerations, told STJ the following:

“After the bombing, we saw reconnaissance aircraft, warplanes and helicopters hovering over the city. The helicopter landed in the stadium, and the U.S. soldiers were transported by it. In the city, there are talks that the explosion did not take place at the restaurant’s door but inside it, because the damage that befell the cars parked near the restaurant is simple if compared to those usually happen. In addition to this, the inside of the building was critically damaged and clearly burnt. Everyone here thinks that the narrative about Daesh organization being responsible for the bombing is unlikely for many reasons.”

“What poses itself as a strange thing is that on the [bombing’s] day the U.S. soldiers were not conducting the usual patrol and were not accompanied by the patrol’s vehicles, which is their habit. The soldiers were by themselves; the street and the restaurant's surrounding on the mentioned day were empty of security elements and guards.”

Addressing the bombing incident, the Syrian Democratic Forces/SDF arrested several people suspected of being involved in the explosion and on other charges, including communication with the Free Syrian Army. The witness said:

“SDF arrested the young man Hisham al-Hussein because he appeared in one of the surveillance camera’s recordings while carrying cables prior to the explosion. Hisham al-Hussein is a civilian from the village of al-Mestaha, working as a driver between it and the city of Manbij.” 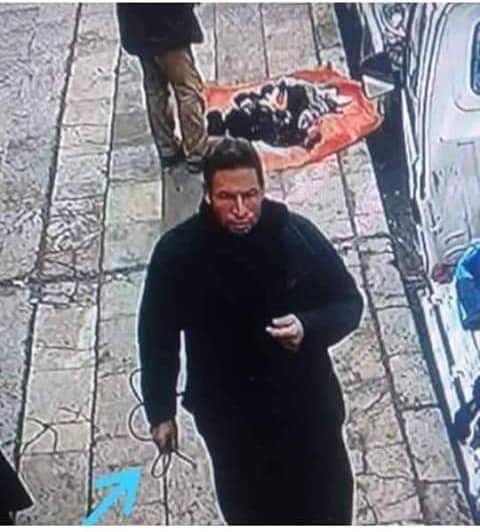 A photo of Hisham al-Hussein, who SDF arrested suspecting his involvement in the bombing after he appeared on one of the surveillance cameras near the al-Umaraa restaurant with cables in his hand prior to the explosion.

Amaaq agency, affiliated with IS, published two statements claiming IS’ responsibility for the bombing. It said that the suicidal bomber Abu Yassin al-Shami implemented the explosion with an explosive vest. 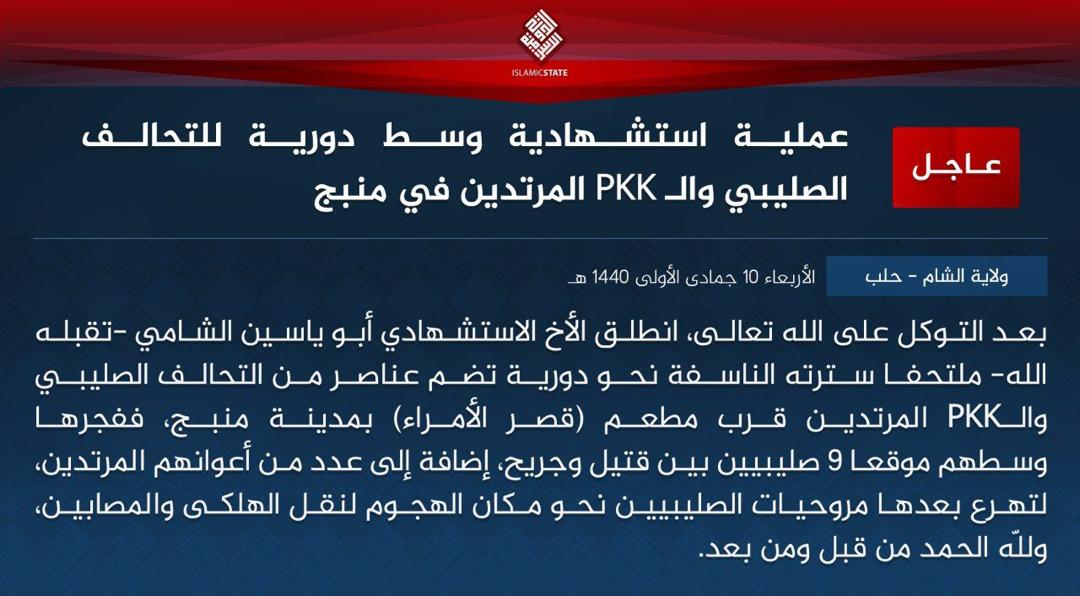 Copy of Amaaq agency’s statement about the bombing that targeted the US-led coalition patrol in the city of Manbij, Aleppo province, on January 16, 2019.

[1] The Arabic acronym for ISIS.