Landmines Kill Many and Threaten the Lives of Thousands in Hawd al-Yarmouk Area, Daraa

The northern entrance of Hawd al-Yarmouk area after being retaken by regime. Image taken on September 13, 2018. Photo credit: STJ

Introduction  Landmines laid in Hawd al-Yarmouk area by Jaysh Khalid Ibn al-Walid/ISIS[1] rebel group, before being expelled by the regime forces in early August 2018, became a serious concern of the population there, as they continue to take lives, according to STJ’s field researcher who reported more than 25 mine civilian casualties, from early August to mid-September 2018, which stops many of those who earlier fled Hawd al-Yarmouk from returning.

Backed by reserve forces[2], the Syrian troops managed to control Hawd al-Yarmouk on August 1, 2018,  and to struck a deal with Jaysh Khalid Ibn al-Walid group, provided for the evacuation of 400 ISIL fighters along with their families to the eastern countryside of al-Sweida and the eastern countryside of Homs, in exchange for the release of the al-Sweida abductees (20 women and 16 children)[3] held by the Organization. However, local sources provided that critical provisions of the agreement haven’t yet implemented as the abductees have not been released until the date of preparing this report.[4]

"I recall when Abu Walid picked pieces of Walid’s flesh and burst out crying bitterly unable to speak one word."

Controlling Hawd al-Yarmouk with pledging allegiance to the Islamic State Organization in late 2014[5], Jaysh Khalid Ibn al-Walid group started planting mines in the contact areas with armed opposition groups held territories, in accordance with a precise military strategy used by ISIL in view of its destructive consequences for the foes, as more than 200 persons were killed by mines planted on the roads of Hawd al-Yarmouk during the last three years, most of them are civilians in their daily jobs. Moreover, mine contamination in Hawd al-Yarmouk area hampering the restoration of normalcy, and it is worth noting that demining teams of the Syrian government carried out some clearance operations, however, they were limited and unskilled.

Hussein. S, 1987, fled his hometown, Ain Thakar village in Hawd al-Yarmouk area, in May 2015 when Jaysh Khalid Ibn al-Walid began executing the hudud penalties[6], as he claimed. He moved among several areas between Daraa countryside and Al-Jedor area north of Hawd al-Yarmouk[7] before returning to his village and being injured by a mine explosion, the thing which he never expected.

"When we got out of our village with, I headed with my family towards Daraa northern countryside, I bought a worn tent which couldn’t protect us from sweltering summers, and freezing winters, yet, it was a luxury, as many others were living in the open, and couldn’t afford one. I used to raise cattle during all the displacement years, to make ends meet; I had about 50 sheep. However, I was so relieved when I heard that Jaysh Khalid Ibn al-Walid was expelled, and we would shortly back to our home, which would end our suffering", said Hussein.

After three years of displacement, fleeing ISIL, many of Hawd al-Yarmouk people returned after it was retaken by the Syrian regular forces, despite the vast destruction the war caused to its infrastructure. Hussein. S and his family were among the pleased returnees, though large parts of their house were destroyed, but alas, on August 22, 2018, he was injured by a landmine explosion.

"As we arrived, I started to remove the debris from the house while my wife cleaned the rooms. We were very pleased to be back, but our pleasure did not last long, as on August 22, 2018, while I was raising the cattle near my house, a landmine exploded under my leg and blew me five meters away. I went unconscious. I didn’t know if it was planted intentionally or just a remnant of war ".

Hussein was transferred to the government hospital in Nawa city, Daraa western countryside with his leg fractured and excessive bleeding led to his faint. When he recovered, he realized that 70% of his left leg was damaged. Two days after the incident, the doctor decided to amputate it; it was the only choice and the hardest thing he would have in his life, but anyway it was a must.

Hussein has difficulty in coping with his new situation despite the sympathy he got from his family and friends.

"What really hurts is not only the disability caused to me, but also being not able to find a job appropriate to my condition. I don't really know anything other than working in the farm and raising cattle, which I can’t do now. This war would decimate us all", he concludes.

Walid. M., 16, another mine victim from Koayiah village, which he fled with his family years ago, and returned lately after Jaysh Khalid Ibn al-Walid group got off Hawd al-Yarmouk in August 2018. Walid was very pleased that he would again meet his friends at school but that did not happen. He died along with two relatives as a result of an explosion of a landmine laid by Jaysh Khalid Ibn al-Walid group in his own house, as they not only mine agricultural lands, but also houses, shops, and buildings of strategic locations.

We progressively returned to our villages in groups, fearful of suspected remaining IS cells. We were very pleased to return to our houses, but alas. At 1:00 pm on Saturday, 4 August 2018, while we were checking our house, just after we arrived, a huge explosion occurred, caused by a series of Explosive Improvised Devices (EIDs) planted in the house of our neighbor Abo Walid and resulted in the immediate death of his son Walid and two others, turning their bodies into pieces, and the injury of 13 residents of the neighborhood, several critically. The explosion also led to the total destruction of Abo Walid’s house and a significant damage to the neighboring houses, Mu'tasim, a friend of Walid recalled sadly.

Consequently, Walid's father left his village and the debris of his house heading towards Qunaitra countryside with his tent. He could not tolerate the death of his son Walid, Mu'tasim said.

"I recall when Abu Walid picked pieces of Walid’s flesh and burst out crying bitterly unable to speak one word. It was a heart wrenching scene. This is war, we learned to expect the worst", said Mu'tasim.

Masaken Jeleen, which is a small town in Hawd al-Yarmouk, was the main stronghold for Jaysh Khalid Ibn al-Walid since 2014, and it was heavily mined since it was a conflict scene, being on the line of contact with Tell Shihab village, held by armed opposition groups.

Ana'am. Kh., a woman in her forties, from Masaken Jeleen. She refused to leave her village even when ISIL took over it. Ana'am lost her husband two years ago by a barrel bomb and became the sole breadwinner for her four children amidst the high living costs, as she couldn’t afford fuel or cooking gas. On top of that Ana'am was blown up by a mine on August 14, 2018

“It wasn’t the first time my sister went to collect wood and dry tree branches for cooking, but it was the last. It was the morning of August 14, 2018, when we heard an explosion from the nearby forest, where Ana'am, known as Um Ahmed, and her 9 years old son went, we hurried there to find them dead from a landmine, as it turned out.”, Ana'am’s brother told STJ. 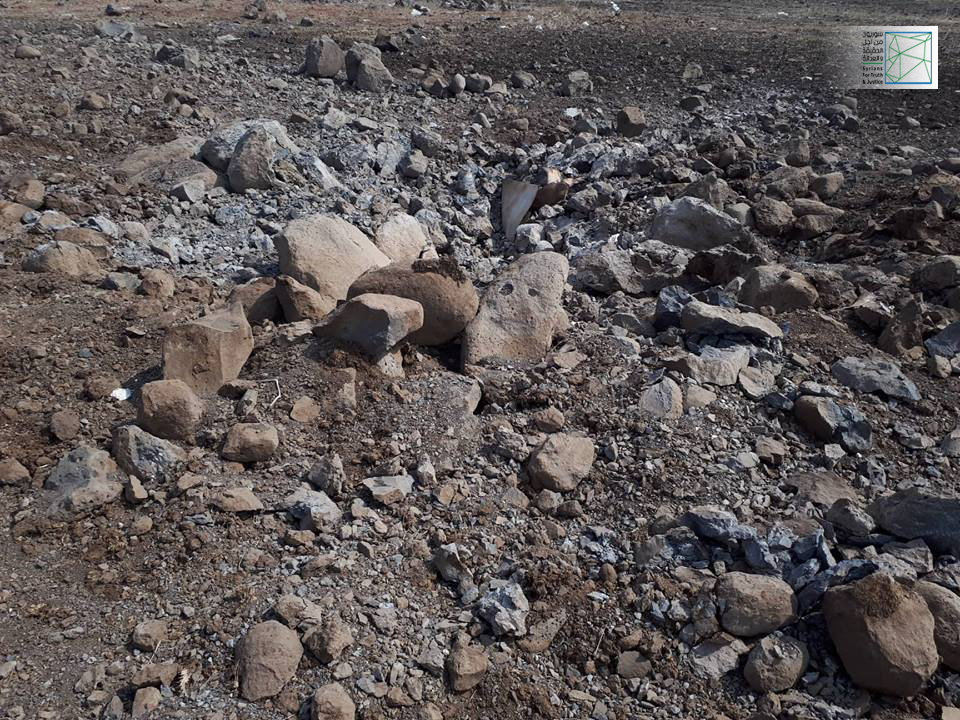 The location of a landmine in al-Shabraq town, Hawd al-Yarmouk after being detonated remotely by the demining team of the Syrian government. Image taken on September 13, 2018.
Photo credit: STJ

The landmines left by Jaysh Khalid Ibn al-Walid group pose a grave threat to more than 100 thousand of civilians from the northern villages of Ain Thakar and Tasil to Bayt Irah and Koayiah, and Masaken Jeleen villages in the south, as they continue to take innocent civilians’ lives and cause them serious mutilations even after the end of battles, as reported by the media activist who is still present in Hawd al-Yarmouk area, Ayham Horani, who goes on to say:

"From early August 2018 to mid-September 2018, more than 25 civilians reported killed or wounded by landmines while farming, collecting wood, raising cattle or carrying water. Many of the injured left with permanent disabilities, mainly amputated limbs. Let alone the psychiatric disorders the injured and their families suffer. The spread of landmines pushed many to displace to safer places, not to risk their children’s lives". 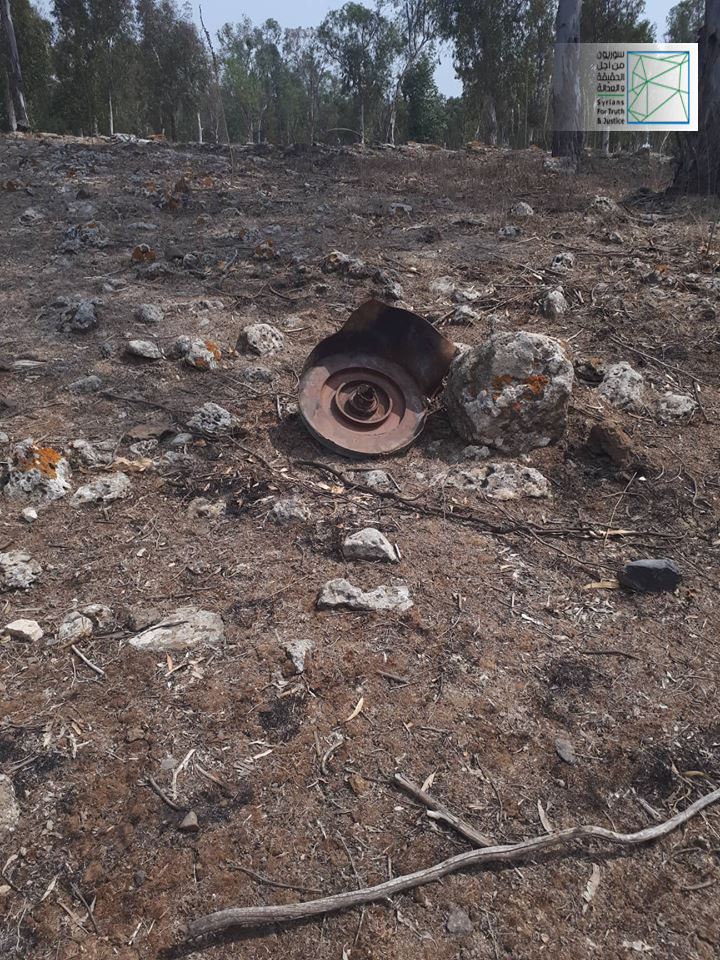 Remains of a landmine planted on the road between Ain Thakar and Tasil. Image taken on September 13, 2018.
Photo credit: STJ

Besides human losses, presence of mines also impedes the recovery of infrastructure and the launch of health and education services, moreover it constrains humanitarian access, inhibit the return of displaced populations and continues to threaten stability in the whole area, the activists explained.

[2] The Reserve Forces (al-Quwat al-Radifa) are former members of the opposition groups who signed reconciliation with the regime to end the hostilities in Daraa province. It contains hundreds of fighters from the following groups: Liwaa Ahrar Tafas, Mu'taz Billah Army, Jaysh al-Ababil, Alwiyat Qasioun, Jaysh al-Thawra, the Headquarter Operation of Watasimo, al-Harrah Military Council, Tasil Military Council, Swords of Truth Room, Liwa Ahrar Qita, Manifest Victory Operation Room, in addition to other groups from the east of the province).

[3]"Another Agreement Concludes to Move ISIS Elements to the North Countryside of al-Sweida in Exchange for the Release of the Kidnapped", STJ, August 2, 2018, https://www.stj-sy.com/en/view/658

[6] To implement the Islamic Sharia Laws.