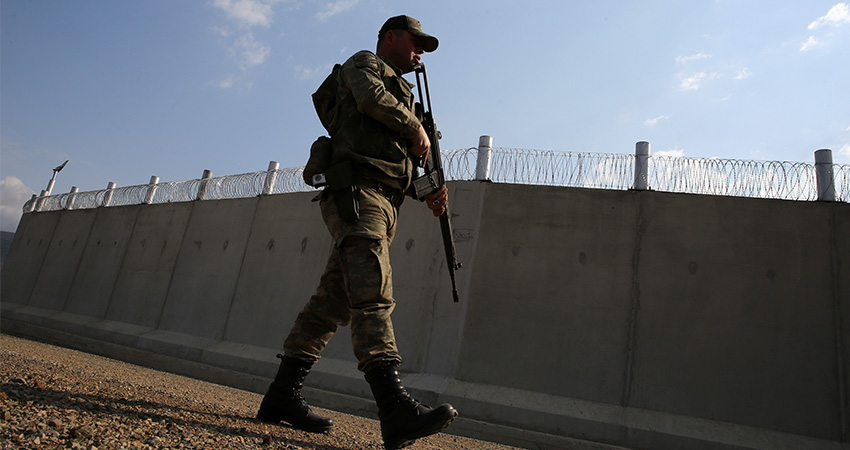 A Turkish border guard patrolling near the separation wall that the Turkish government built between it and Syrian territory. Credit: Anadol Images.

STJ cites in the present report information and detailed testimonies on cases of violent acts committed by the Turkish border guards (gendarmerie) against Syrians who tried to cross the border into Turkey illegally between early 2022 and the end of May. These acts involved beating, mistreatment, and unjustified brutal torture that caused serious injuries to asylum seekers.

STJ documented more than four cases of asylum seekers shot by Turkish border guards while trying to cross into Turkish territories illegally. Two of the asylum seekers attempted to smuggle to Turkey from Idlib and the two others left from Ad Darbasiyah town in northeastern Syria We are continuing to gather witness statements about these cases.

The Turkish border guards’ violent conduct against Syrian asylum seekers reflects the Turkish government’s policy of torture and ill-treatment in meeting Syrian asylum seekers in order to curb their influx to its lands. This is not surprising at a time when Turkey is planning to repatriate more than one million Syrian refugees into northeastern Syria and threatening to wage further military operations.

STJ already published a detailed report citing 28 substantiated cases of Syrian asylum seekers who were killed and tortured by the Turkish border guards for attempting to cross Turkish borders illegally in 2021.

Pregnant Women Were Not Spared

On 14 February 2022, the Turkish border guards severely beat a Syrian man and his pregnant wife for attempting to cross into Turkey illegally from the al-Matmoura village, in Ras al-Ayn/Serê Kaniyê in al-Hasakah province, northeastern Syria, while with their young daughter. The man recounted to STJ:

“We are originally from northern rural Homs and are residing in al-Bab city in north Aleppo. We decided to smuggle into Turkey and thus we dealt with members of the Sultan Murad Division of the Syrian National Army (SNA) to guide us there through an illegal route. However, the smuggler told us that it was very difficult to cross into Turkey from northern Aleppo, so we should go to Ras al-Ayn/Serê Kaniyê and smuggle from there. Indeed, we went to Ras al-Ayn/Serê Kaniyê with members of the Division and crossed the border wall to Turkey at 3:00 AM, but the Turkish border guards caught us.”

“The Turkish soldiers who arrested us smelled of alcohol. One of them shouted at us in Turkish, which we do not understand, and then he started to hit me with the buttstock of his rifle on my back. My little girl cried for fear of the soldiers’ actions. Then, one of the soldiers stood near my wife and started screaming at her. My wife thought that she should change her place and when she tried to move, he started hitting her with the buttstock of his rifle on her back and then kicking her in the belly. I tried to stand up to get the soldier away from my wife, but he got angry and shot near her head, and then he came with several other soldiers and beat me. The Turkish soldiers beat us for about an hour and when they finished, they took photos of us and then threw us on the Syrian side. The torture left me a compound fracture in my foot and left bruises on the body of my wife who fortunately did not lose the baby.”

On 9 April 2022, a young Syrian woman attempted to cross illegally into Turkey through a smuggling route started from al-Sheikh Abdi village in Tell Abyad, Raqqa. However, the Turkish border guards caught her and tortured her brutally. The girl, who preferred to use the nickname, Yasmeen, told STJ:

“I attempted to smuggle into Turkey hoping to join my fiancé who lived there. I left my province Deir ez-Zor towards the Sheikh Abdi village in Tell Abyad, taking a smuggling route that passes through areas of the Syrian Democratic Forces (SDF) and the SNA. I attempted with a group of people to cross into Turkey from the Sheikh Abdi village. Nevertheless, the Turkish border guards caught us and started hitting us, both men and women, with batons severely. The guards beat me in the waist and feet and threw me back to the Syrian side. Beatings left me bedridden and taking painkillers for a week.”

“Later, I attempted to smuggle to Turkey again with a group of asylum seekers. I had a mobile phone with me to call my fiancé in case I succeeded in crossing. I was hiding the phone in my clothes so that the guards would not see it. Unfortunately, the guards caught us and sat us down on the ground. Then, my phone rang, so a guard came at me and started kicking me in a brutal way until I took the phone out of my clothes and gave it to him. One of the young men from the group I was with tried to defend me, but the guards beat him so brutally, leaving him with severe fractures.”

On 22 January 2022, a young man with a group of up to 30 people attempted to smuggle to Turkey from the village of Dorriyeh in Idlib, northern Syria. Nevertheless, the Turkish border guards caught them, beat them, and used them in forced labor.

“After we passed the border wall, we hid among tall grasses so that the Turkish guards would not see us. However, the guards detected a movement within the grasses and started to fire their rifles. We thought that they were firing in the air before the bullets started exploding near our feet. We turned ourselves in after the injury of two young men by bullet fragments. The Turkish border guards tortured us and left us standing in the freezing cold for several hours. After that, the guards ordered us to remove the weeds we were hiding within. The officer in charge of the border post was watching us holding a green rod with which he hit us when we slowed in working. Afterwards, the guards returned us to the Syrian side.”

On 16 February 2022, a group of Syrian men and women attempted to enter Turkey illegally from the Dorriyeh village and were caught by the Turkish border guards. A man from the group recounted to STJ:

“The guards forced us, the men, to strip completely purportedly to search for drugs. That was more humiliating for us than beating, especially in the presence of women. After that, the guards ordered us to collect the dirt, remove the grass from the vicinity of their cabin, and clean it from the inside. While we were working, the guards hit us continuously with the buttstocks of their riffles. The guards also brutally beat anyone who tried to quibble on the work or lag.”