This report records the testimonies of Syrian fighters recruited by Russia to serve in Armenia, as well as testimonies about individual Syrian-Armenians who volunteered to fight in the second Nagorno-Karabakh War

Conducting a Russian-Turkish joint patrol near the village of Jarqli/Çariqlê, to the west of Ayn al-Arab/Kobanî, on 17 September 2020, within the context of a military agreement signed following the withdrawal of US troops from the area in October 2019. Credit: STJ.

This report was previously titled “To Nagorno-Karabakh, not Libya: How did Russian Forces Trick Dozens of Syrians into Mercenarism in Armenia?”. Following comments and additional testimonies, the report was renamed, revised, and updated March 2021.

From the Russia-operated Hmeimim Air Base, northeast of Jableh city in Latakia province, Syrian fighters affiliated with pro-Regime forces were shipped off to Armenia during the summer and fall of 2020. While the recruitment process resembles that conducted by Russia when it sent Syrian regime fighters to Libya, it is unclear how these shipments are related to the 2nd Nagorno-Karabakh war, fought between Armenia and Azerabaijan between September and November 2020. The Russian military carried out the enlistments in collusion with the Syrian government, according to the testimonies and accounts that Syrians for Truth and Justice (STJ) obtained from witnesses and several credible sources. The recruits are almost exclusively members of the 5th Legion and are particularly from the provinces of Homs and Deir ez-Zor.

The testimonies delivered by STJ’s field researchers verified that the recruited fighters were presumably bound for Libya. However, at some point in late summer a decision was made to redirect these fighters to Armenia, a plan only disclosed to the recruits later.

At least five transfers of Syrian fighters contracted by Russia are documented in this report, in addition to an estimation of casualties. STJ recorded nearly 10 deaths, with only a few bodies delivered to families so far, and over 40 wounded. The injured recruits were returned from Armenia to a military hospital in Homs province.

Additionally, the report documents the travel of dozens of Syrian-Armenians from Beirut and Damascus airports to Armenia in order to volunteer in the Nagorno-Karabakh war. STJ emphasizes that this occurred on a strictly volunteer basis, in no way equivalent with the recruitment of Syrians as military contractors/mercenaries by Russia and Turkey, whether in Libya or Azerbaijan.

The following report is one part of STJ’s larger efforts to investigate the ongoing recruitment of thousands of Syrians, both militants and civilians, into warzones alien to them. These recruitments have so far been overseen by Turkey and Russia.[1]

For the purposes of this report, STJ conducted a total of 10 interviews, including personnel of the Syrian government forces recruited by Russia as contractors and volunteers from Syria’s Armenian community, as well as family members of recruits sent to Armenia during the covered period. The persons whose testimonies are listed herein were contacted either in person or online between September 2020 and January 2021.

STJ initially published this report under the title “To Nagorno-Karabakh, not Libya: How did Russian Forces Trick Dozens of Syrians into Mercenarism in Armenia?”. After the report’s publication, several activists, journalists, and human rights defenders reached out to STJ with comments and questions about the evidence included. In response, STJ revisited sources and removed any ambiguous testimonies from sources who the organization could not reestablish contact with. Furthermore, STJ interviewed additional sources and incorporated their testimonies.

While STJ was not able to acquire visual evidence relating to Russian-recruited non-Armenian Syrians travelling to Armenia, the testimonies included in this report were given by a number of individuals with no relation to one another and from different parts of Syria.

STJ’s digital forensics analyst tracked aircraft flights which carried fighters from Syria to Armenia, but was only able to confirm  the mentioned flights relating to Syrian-Armenians. In relation to this, STJ would like to clarify that the Flightradar 24 website, which the organization frequently uses to track military flights, is not capable of providing conclusive data on all such flights that occur. While answering some of the most frequently asked questions on its website, Flightradar24 mentions that the tracking details of some aircraft might be “restricted or not displayed.” These flights often correspond to aircraft belonging to militaries, or to civilian operators whose owners request that they be blocked. Furthermore, some flights may be outside the service operator’s coverage or not equipped with a compatible transponder. 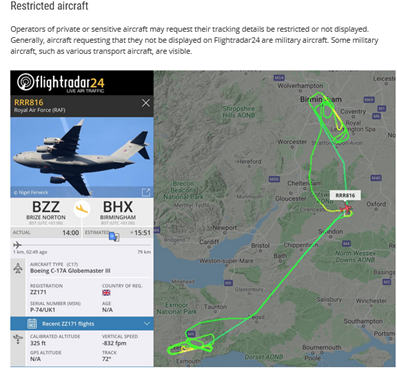 Image 1- Screenshot taken from Flightradar24, particularly the section where the website explains why the tracking details of some aircraft are restricted.

STJ re-emphasizes that flight tracking data is only valuable in helping corroborate investigative work, and that such data or the lack thereof is not sufficient to either confirm or deny that a flight has taken place.

To read the complete report as a PDF, follow this link.