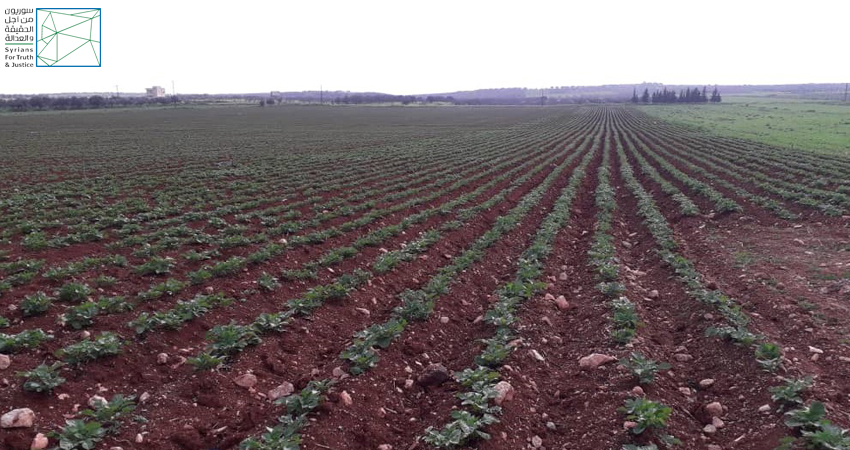 An exclusive photo from STJ showing agricultural lands in the city of "Kafr Zita", in Hama's countryside, which were confiscated and put up for auction by the Syrian government in late 2020.

The Syrian government seized large areas of agricultural lands in the provinces of Hama and Idlib and offered these plots for rent and investment by public auctions. These land grabs occurred after government forces controlled various towns in the northern and western rural areas in Hama and the southern rural areas of Idlib in February 2020.[1]

The seized lands originally belonged to civilians, who were forced to leave their farms and houses behind as they escaped military operations launched by government forces and their allies. Reported seizures covered lands cultivated with pistachio, olives, wheat, barley, sugar beet, cotton, potatoes, and other vegetables. Other grabs targeted key fish farms in Syria, particularly in the al-Ghab region.

In Hama, the government backed the seizures with the pretext that landowners live in areas controlled by “terrorist organizations.” The Hama Security and Military Committee (HSMC),[2] headed by Ramadan Youssef al-Ramadan, carried out the confiscations. In Idlib, the Idlib Farmers Association (IFA),[3] a government-run entity, perpetrated the seizures, alleging that landowners have unpaid dues to the Agricultural Cooperative Bank (ACB), adding that they are settled in areas outside the control of the Syrian government.

To obtain information about the area of lands confiscated by the Syrian government, Syrians for Truth and Justice (STJ) interviewed one of the legal professionals who worked on documenting the reported seizures. The lawyer said that the government grabbed approximately 60,000 dunums (6000 hectares),[4] in the provinces of Hama and Idlib between July —when the auctions started to be held—, and late November 2020.

This recent series of land grabs had a grave impact on the lives of hundreds of farmers in Hama and Idlib, who mostly escaped combat to IDPs camps on the Syria-Turkey border strip. These seizures deprived farmers of their only livelihood, leaving them to suffer dire humanitarian circumstances after they were doing relatively well financially.

In addition to legal professionals, STJ interviewed a number of the affected farmers. They all said that government forces and allies denied them access to the towns they controlled in the suburbs of Hama and Idlib, declaring that the towns were military zones.

Image 1- Image locating key towns and villages in the provinces of Idlib and Hama, where the Syrian government confiscated large plots of agricultural lands.

This extensive report draws on a total of 10 interviews. STJ reached out to five affected farmers in rural Hama and Idlib, whose agricultural lands were seized and auctioned in 2020, and a fish farmer in al-Ghab region, in Hama countryside, who owned one of the confiscated fisheries.

Furthermore, STJ interviewed two local sources and an activist based in Hama. The activist recapped the events that led up to the latest wave of land confiscations in rural Idlib and Hama.

To gain insight on the legal context on these seizures, STJ interviewed a legal professional who participated in documenting the seizures and collecting the data that would allow us to estimate the total area of lands seized.

Field researchers with STJ conducted most of the interviews with eyewitnesses and sources online between early October 2020 and late January 2021 and consulted various open sources and references that addressed the report’s subject matter.

In late August 2019, Syrian government forces and allied militias managed to advance into and ultimately control the northern countryside of Hama,[5] particularly the cities of Morek, Ltamenah, and Kafr Zita and their administratively affiliated villages. Simultaneously, government forces took over the towns and cities of Hobait and Khan Shaykhun, and their villages, south of Idlib, in late August 2019. By February 2020, the forces had control of the entire region between the Qalaat al-Madiq area and the al-Amqiyah village, north of the western countryside of Hama. The forces also established their rule over Ma`arat al-Nu`man and Saraqib areas in Idlib countryside.

Image 2- Map showing the areas controlled by Syrian government forces in the two provinces of Idlib and Hama on 1 February 2020.

When opposition armed groups and other jihadist factions withdrew from the areas that government forces controlled,[6] pro-government militias divided agricultural lands in the northern and western countryside of Hama and the southern countryside of Idlib amongst themselves, including the perennial trees they contained and the cultivated crops, especially pistachios. Commenting on land and crop confiscations, a local source told STJ that pro-government militias hired civilian workers from towns in rural Hama— including Tayyibat al-Imam, Khatab, Halfaya and Suran— and started harvesting pistachio and olive crops in early June 2020. Several workers died or were wounded in land mine blasts, planted in agricultural lands during the clashes between Syrian government forces and armed opposition groups.

The source added that because several government forces’ divisions were claiming control over target areas and allied militias operate under divergent [political and/or religious] affiliations, commanders competed against each other for the seized agricultural lands. Consequently, involved militias engaged in large-scale disputes, a number of which turned into armed confrontations, while others ended with crops being set aflame

“Comrade Hazim al-Shaikh, Secretary of the Ba’ath Party Department in Muhradah, and engineer Hussam al-Faraj, head of the Kafr Zita Agricultural Directorate, inspected pistachio fields in the city, to assess the crops and this year’s yield to determine their worth [namely, to auction them].”

The page added that the revenues of the crops, owned by civilians, will be deposited at the fund dedicated to the families of dead soldiers of Syrian government forces.[7]

Image 3- The assessment visit by the Secretary of the Ba’ath Party Department in Muhradah and head of the Kafr Zita Agricultural Directorate to a pistachio field in Kafr Zita. Credit: Hama [al-Ba’ath Party] Branch- Muhradah Department.

Activist Abdulsalam al-Hamwi recounted to STJ the circumstances surrounding the fires that broke out on 12 June 2020 in the wheat fields in Muhardah region, where the National Defense militias are stationed. He said that the wind caused fires to spread eastwards, reaching the outskirts of Morak town in the northern countryside of Hama, passing through agricultural lands in the villages and cities of Tal Meleh, Hasraya, al-Zakat, al-Arbaeen, Ltamenah, Kafr Zita, Latmeen and Lahaya. Al-Hamwi added that the heavy fires started after a dispute between checkpoint commanders and personnel over the division of land and shares of locals’ crops. He noted that Adnan Hussain al-Hamoud, 52, a civilian from Kafr Zita, died from third-degree burns while trying to put out the fires that consumed his lands.

Additionally, activist al-Hamwi reported crop losses due to the fire that spread into several villages and towns in Idlib province, including Khan Shaykhun, al-Tamanah,  Atshan, southern and eastern suburbs of Ma`arat al-Nu`man, Jarjanaz, Alteh, Ma’ar Shimmareen, Talmenes, Hesh,  and Saraqib, as far as Kafr Nouran in Aleppo countryside. He added that the fires damaged approximately 15,000 dunums (1500 hectares) in Hama countryside, consuming pistachio crops cultivated in an area of 3000 dunums (300 hectares), olive trees in about 3000 dunums (300 hectares), wheat in 7000 (700 hectares), and barley and nigella sativa in 2000 dunums (200 hectares).

Responding to the fires and subsequent crop and land losses, the Syrian government-affiliated HSMC issued a statement on 14 August 2020. The statement banned persons other than original owners from ploughing and working in agricultural lands until the committee, founded by Administrative Order No. 3077, finished its work. The ban is based on information confirming that some citizens are expropriating these lands.[8]

Following militia intra-fighting, the government’s HSMC and the IFA began to confiscate lands owned by IDPs from the towns, villages, and cities that witnessed military action and offered them—by public auction— for 1-year-lease contracts from October 2020 to the summer of 2021. The HSMC and the IFA carried out confiscations on various pretexts, including that landowners were living in areas controlled by the armed opposition, or that landowners owe the ACB money.

[1] “A Short Briefing on the Humanitarian and Military Situation in Idlib,” STJ, 9 February 2021, https://stj-sy.org/en/a-short-briefing-on-the-humanitarian-and-military-situation-in-idlib/ (Last accessed: 25 May 2021).

[3] The Idlib Farmers Association (IFA) is an entity that consists of several agricultural cooperatives, directly affiliated with the province and the Syria Farmers Union. It is one of the bodies operating under the Regional Command of the Arab Socialist Ba’ath Party.

[5] Among them are the National Defense, the 5th Corps, and other militias such as the Ba’ath Brigades.

[6] Among them are Hayat Tahrir al-Sham (HTS), Turkistan Islamic Party in Syria (TIP), and Ansar al-Tawhid.