A Short Briefing on the Humanitarian and Military Situation in Idlib

The military operation launched in the province of Idlib by the Syrian forces backed by Russian air support, since early 2020, has killed scores of civilians and displaced more than half a million people, so far

Backed by Russian airstrikes, the Syrian government forces have stepped up their major ground and air offensive on the province of Idlib. The offensive has been ongoing since early 2020, and led, so far, to the regular forces’ retake of strategic cities and towns, which used to house more than half a million people, including internally displaced from different provinces.

The attack caused the death of 131 civilians and the injury of 353 others in January alone. Besides, hundreds of airstrikes were conducted throughout the offensive, 22 of which targeted vital installations. According to documentation and statistics teams, more than half a million people (around 700.000), mostly women and children, were displaced towards areas at the Syria-Turkey border strip and other areas in western and northern rural Aleppo ( Operation Euphrates Shield and Operation Olive Branch regions), reaching the city of Manbij, which is under the control of the Syrian Democratic Forces (SDF).

This military escalation is a continuation of the attack launched by the Syrian regular forces and their allies against the province of Idlib in April 2019.  STJ prepared a report documenting the killing and wounding of many civilians in violent attacks on southern rural Idlib[1].

Pro-government forces under Russian air cover managed to regain control over large areas in southern Idlib as well as the Damascus-Aleppo highway (also known as M5), following battles and clashes with the armed opposition groups of, Hayat Tahrir al-Sham (HTS), Ansar al-Tawhid and the Turkistan Islamic Party in Syria.

From early January 2020 until February 9, 2020, the Syrian government forces have respectively controlled the cities of Ma`arat al-Nu`man and Saraqib, the villages of al-Nayrab, Afes, the town of Jarjanaz, the village of Khan Assubul, the village of Ma’ar Shoreen, the village of Talmenes, and the town of Kafar Roma, in addition to dozens of small villages east of the international road, known as the M5.

In the context of military operations, the Syrian government forces bombed Turkish observation points, killing at least 8 Turkish soldiers and wounding others at an observation post in the village of Tronba near the city of Saraqib, on February 3, 2020. In response, Turkey targeted Syrian troops killing an unknown number of Syrian soldiers and brought big military reinforcements, included hundreds of soldiers and military vehicles, to Idlib on February 8, 2020. 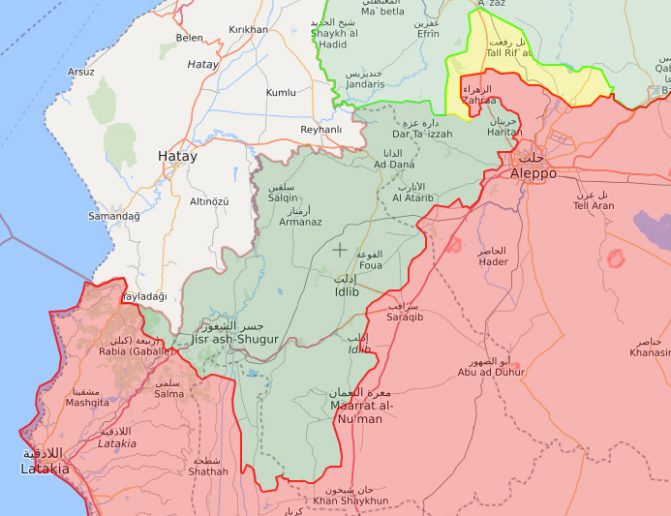 Who controls what in northwest Syria as of February 13, 2020. Credit:  Syrialivemap

Concurrently with battles on the ground, Russian and Syrian jets hit civilian populated areas in all Idlib, especially those adjacent to the M4 and M5 highways. STJ researcher talked to several documentation and statistics teams as well as military observatories who confirmed that 440 airstrikes were conducted by Russian fighter jets and 392 others by Syrian jets, also, 266 barrel bombs were dropped by pro-government helicopters in addition to 362 artillery and rocket attacks in January alone.

To gather first-hand information about the consequences left by the offensive in January; number of casualties and the vital installations targeted by Russian and Syrian jets and artillery shelling, STJ field researcher met local activists, members of local documentation and statistics teams, Response Coordination Group, the civil defense team (known as White Helmets). (note: STJ will publish detailed reports on the incidents led to civilian casualties). Summary of the information obtained:

Russian and Syrian fighter jets and artillery conducted 1460 bombings in all Idlib, 22 of which directly targeted vital facilities such as schools and hospitals.

131 civilian deaths were documented including 21 women, 15 girl children 16 boys and 69 men, while the number of the wounded reached 353, mostly women and children.

STJ had prepared several reports on the attacks that targeted popular markets and vital centers in Idlib province and would prepare additional detailed reports to investigate other attacks that occurred during the recent military campaign.[2]

Civilians flee from Idlib to find safety near the border with Turkey, are facing dire humanitarian situations, as most of them are staying in the open; on the streets’ sides or under trees in agricultural lands, while those lucky enough managed to get a tent or to stay in barns or poultry farms or to rent houses at very high prices.

Further, IDPs face great risks in the open, as they are exposed to a changing weather and severe cold. The Syrian Response Coordination Group announced the death of nine people, including children, as a result of the cold or suffocation of smoke from primitive fireplaces installed in the camps.

Reply
The Syrian Government is Seizing Large Swathes of IDPs Lands in Hama and Idlib Suburbs - Syrians for Truth and Justice June 10, 2021 - 7:02 am

[…] “A Short Briefing on the Humanitarian and Military Situation in Idlib,” STJ, 9 February 2021, https://stj-sy.org/en/a-short-briefing-on-the-humanitarian-and-military-situation-in-idlib/ (Last accessed: 25 May […]