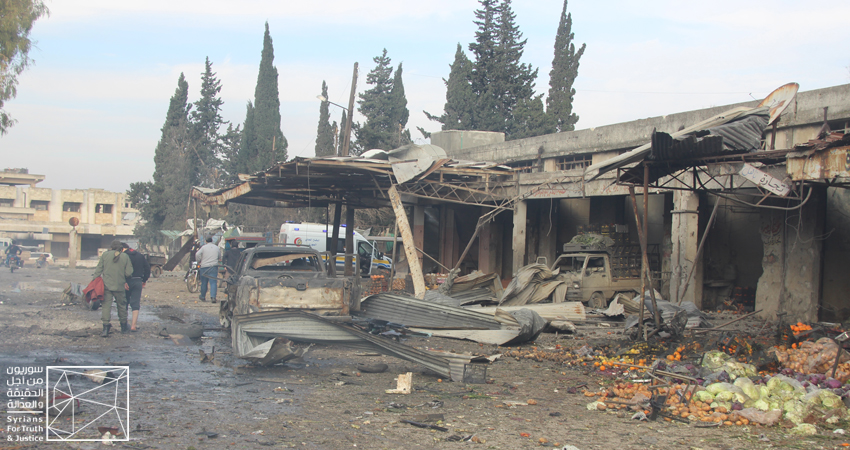 The destruction that befell the marketplace, known as Souq al-Hal, in the city of Idlib as it was bombarded on January 15, 2020. Photo credit: STJ.

In January 2020, the Syrian regular forces and their Russian allies carried out a fresh series of brutal attacks, which once again made a target of crowded marketplaces in the cities and towns of the province of Idlib, especially those seated near the Damascus-Aleppo/M5 International Highway, which was taken over on February 11, 2020,[1] and others located near the Aleppo-Latakia/M4 International Highway. Covering the developments, Syrians for Truth and Justice/STJ recorded no less than 5 violent attacks that hit marketplaces in the cities and towns of Binnish, Ariha, Idlib City, Kafr Latah and Ma’arat al-Nu’man, taking a toll on dozens of civilians, including women and children.

Of the five attacks that targeted overcrowded marketplaces in January 2020, the following airstrikes were the most ferocious— the first hit the main marketplace in the city of Binnish, southern rural Idlib, on January 11, 2020, rendering eight civilians dead, including six children and a woman.

The second airstrike, however, took place on January 15, 2020, affecting the marketplace, called Souq al-Hal, in the city of Idlib and the close by Industrial City, al-Sinaia Neighborhood, causing the death of 22 civilians, among whom were women and children.

It was noted that these airstrikes were carried out just a few days after the Russian Ministry of Defense announced on January 9, 2020, a ceasefire in northwestern Syria,[2] in correspondence with an agreement sealed with Turkey, which was to be put into force on the same day. For her part, STJ’s field researcher pointed out that, hearing about the ceasefire, many people loosened their guard and went out to the markets to buy their needs, where the airstrikes awaited them.

Most of the airstrikes, the filed researcher reported, have sent tens of thousands of people on a flight of displacement to the northern border areas, which again may indicate the Syrian regular forces’ intention to evacuate these areas of their residents in a step to take them over, particularly those located near the Damascus-Aleppo/M5 and Aleppo-Latakia/M4 international highways, especially since the air stricken areas lack in all sorts of militarization.

This fresh wave of airstrikes was introduced by the Syrian regular forces and their allies’ tendency in December 2020 to focus their raids on overcrowded marketplaces in the cities and towns of southern rural Idlib, located near the Damascus-Aleppo/M5 International Highway, where STJ managed to document four airstrikes that were all carried out over two days of the named month before targeting similar markets and causing the death of numerous civilians,[3] a thing that indicates that these attacks were not random by any means.

STJ had also monitored two separate airstrikes in the same month, one of which occurred on January 5, 2020, affecting two kindergartens—al-Muslim al-Sagheer and Baraem al-Islam, in addition to Khalid Basheer Halabiyeh School in the city of Ariha, southern rural Idlib. The two airstrikes rendered dead 13 civilians, including four children and a woman. The second attack, nonetheless, took place on January 11, 2020, destroying a home owned by a family displaced to the town of al-Nayrab, also in southern rural Idlib, taking a toll on six civilians, of whom two were children, and injuring others.

These airstrikes coincided with violent confrontations in the province of Idlib, involving the Syrian regular forces and armed organizations—including armed opposition groups, of which a number are on the world’s lists of terrorism.[4]  Starting in early January 2020 up to February 21, 2020, the Syrian regular forces managed to take over the cities of Ma’arat al-Nu’man and Saraqib and the towns of Hish, al-Nayrab, Afss, Jarjanaz, Khan al-Subul, Ma’ar Shureen, Talmenes and Kafr Rouma, in addition to dozens of small villages to the east of the Damascus-Aleppo/M5 International Highway. Both the airstrikes and the confrontations took place in parallel with other battles between the two sides in the southern and western rural parts of Aleppo, where the Syrian regular forces managed to control the entire city of Aleppo and the entirety of is southern countryside and large parts of its western countryside on February 16, 2020, after they violently escalated military action in these areas and caused, as a result, the death or injury of many civilians.[5]

On February 6, 2020, during the special emergency session, which was held in response to a request by UK, USA and France and where the Security Council was briefed on the worsening conditions in Syria, the UN called for the cession of confrontations in Idlib and sparing the civilians further suffering. On his turn, Geir Pedersen, the UN Special Envoy for Syria, “appeal[ed] for an immediate end to hostilities, and for a serious international effort to cooperate on Idlib”, for he and Mark Lowcock, Under-Secretary-General for Humanitarian Affairs and Emergency Relief Coordinator, have briefed the Security Council meeting on the situation in Syria and warned of “a severe and deteriorating humanitarian situation” in Idlib, northwestern Syria.[6]

On February 14, 2020, STJ published a briefing on the key incidents that synced to the escalation which the Russian and Syrian regular forces embarked on at the onset of 2020.[7]

Photo no. (1) – Map showing the distribution of military powers in the province of Idlib up to February 21, 2020.

The report is based on a total of (15) testimonies and interviews, conducted with eyewitnesses either in person or online by STJ’s female researcher in the province of Idlib throughout January 2020. Additionally, the report references several open sources that have documented the covered incidents.

STJ recorded  five new air raids at least, which made a target of jammed marketplaces and houses surrounding them, particularly in the cities and towns of the province of Idlib—Binich, Ariha, Idlib City, Kafr Latah, and Ma’arat al-Nu’man, located near the Damascus-Aleppo/M5  and the Aleppo-Latakia/M4 international highways in January 2020.

Of these airstrikes was the one that hit the main marketplace in the city of Binich, southern rural Idlib, on January 11, 2020, and the raid that targeted the marketplace, Souq al-Hal, in the city of Idlib on January 15, 2020, the city which incubates about one million people, including those displaced from different Syrian Provinces. These airstrikes resulted in the death and injury of dozens of civilians and caused the displacement of many others, who fled their homes towards the northern border areas.

STJ’s female field researcher pointed out that the Syrian regular forces continuation of bombing marketplaces in the province of Idlib throughout January 2020 might be a repeated attempt to first impose economic restrictions on the province’s residents, which in their impact resemble economic sanctions, and second to empty the areas of their residents and trigger them to escape, as to pave the way for taking control of these areas, especially those seated close to the international highway between  Damascus and Aleppo/M5 and the one between Aleppo and Latakia/M4.

Photo no. (2) – Map showing the areas of Binnish, Idlib City, al-Nayrab and Ariha and their location to the international highways of Damascus-Aleppo/M5 and Aleppo-Latakia/M4.

You may read and download the full report in PDF format (35 pages), by clicking here.

[1] On February 27, 2020, the Damascus-Aleppo/M5 International Highway was again blocked by the armed opposition groups, however supported by Turkey.

[4] On top of these armed groups are Hayat Tahrir al-Sham/HTS, the Turkey-backed Syrian National Army, Ansar al-Tawhid and the Turkistan Islamic Party in Syria.