Syria: the UN High Commissioner of Refugees Should Take Steps to Put an End to Statelessness Policies

STJ reacts to the statement of the UN high commissioner for Refugees for stronger political commitment and legal action towards the 4.3 million stateless people worldwide 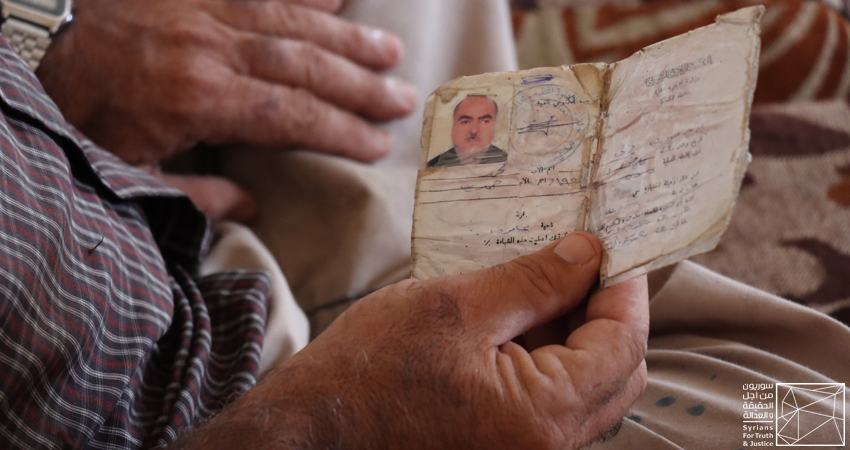 An exclusive image that shows a document for the maktumeen of Syrian Kurds.

Syrians for Truth on Justice welcomes the call of the UN High commissioner for Refugees to tackle the issue of statelessness worldwide. We wish to take the opportunity to provide the UN refugee chief information about the fate of stateless people in Syria.

Statelessness deprives individuals of their fundamental right to nationality. This absence of recognition provokes exclusion from civic, political and social participation, deprivation of access to their rights, and marginalization in the society.

During decades under the Syrian government (SG), the Kurdish population has been partially deprived of legal recognition, citizenship and basic human rights. Indeed 60 years ago, in 1962, after a census[1] in al-Hasakeh governorate, the SG created two statuses for the Kurdish population: the «ajanib» and the «maktumeen», stateless deprived of administrative and legal existence. Furthermore, members of nomadic tribes and children were also impacted by this census, mainly children of unrecognized lineage and children of political opponents.

Those patterns of systemic violations are ongoing despite decree no 49 (2011) which gave citizenship to the ajanib population. However, the maktumeen were not included. In 2018, information gathered by STJ highlights that around 50,000 maktumeen have eventually become citizens through the process of being declared ajanib and then undergoing the naturalisation process. Yet, there are still around 150,000 people deprived of their rights and are being subjected to discrimination and invisibility.[2] Despite official announcement in 2021,[3] the SG posted a document on Facebook defining 6 steps for the maktumeen to obtain naturalisation. Several human rights activists and lawyers who oversaw the files of their maktumeen clients report that the citizenship proceedings are quite complex and that the approval for granting citizenship to a maktumeen is a pure “security decision”.

In the context of the Syrian conflict, since 2011, statelessness has become an increasing issue, especially impacting the lives of children. Refugee children are particularly vulnerable to statelessness. Due to the Civil Status Law of 2021[4] children cannot be registered in civil registration centers as long as their parents’ marriage is not registered. Yet, Syrian refugees and internally displaced people are often not able to register their marriage which in return provide them to register the birth of their children[5] making them stateless. On top of that, fear of persecution and corruption often prevent Syrian couples from undergoing such a process. Furthermore, children of Syrian women married to foreign fighters, children born of rape in detention facilities and security checkpoints, and children whose parents lost their identity documentation during displacement are haunted with statelessness.

This situation has consequences on everyday lives. Depriving people of citizenship prevents them from exercising their rights, and encourages discrimination prohibited under Article 2 of the International Covenant on Civil and Political Rights (ICCPR).[6] This discrimination is also deeply rooted in gender bias as women in Syria remain unable to transmit their nationality to their children.

This invisibility makes it impossible in practice for stateless people in Syria to effectively participate in public and civic matters. Although the Syrian Arab Republic is not bounded by the 1954 Convention on Stateless people[7] and the 1961 Convention on reducing statelessness,[8] a State must not interpret its power based on sovereignty without taking into account its responsibility to protect and duty to implement Human Rights, in accordance with the Declaration on the Rights of Persons Belonging to National or Ethnic, Religious and Linguistic Minorities, Article 8.[9]

Recommendations to the UN High Commissioner for Refugees:

[2]« Statelessness in Syria: An Enduring Dilemma ». Syrians for Truth and Justice, 11 October 2022. https://stj-sy.org/en/statelessness-in-syria-an-enduring-dilemma/.

[7] United Nations Office of the High Commissioner on Refugees, «Convention relating to the Status of Stateless Persons», 1954.

[8] United Nations Office of the High Commissioner on Refugees, «Convention on the Reduction of Statelessness», 1961

[9] United Nations Human Rights Office of the High Commissioner, «Declaration on the Rights of Persons Belonging to National or Ethnic, Religious and Linguistic Minorities», 1992.