Syria: The Power of the Executive Branch and its Security Organs Make Judicial Immunity Ineffective 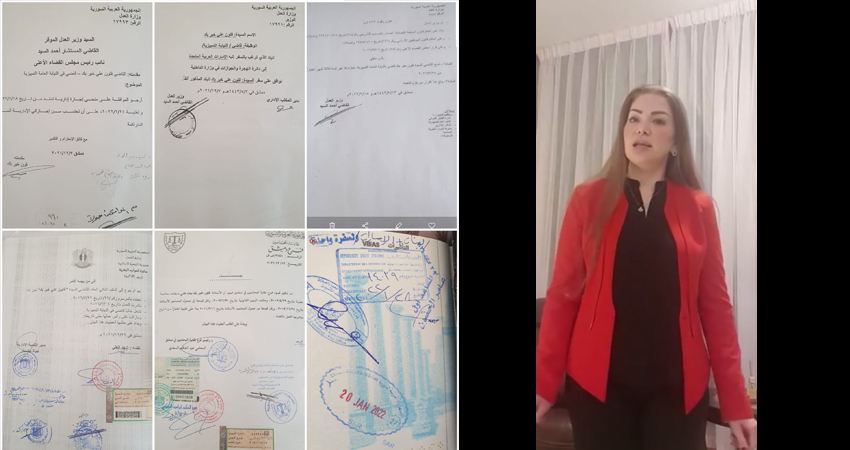 A screenshot taken from a video published by Judge Futoun, along with a set of documents related to how she left Syria.

On 27 May 2022, a video went viral on social media of a Syrian judge appealing to President Bashar Al-Assad to relieve her from a case trumped-up against her by her sister, a precedent that is the first of its kind.

Futoun Khair Baik, a judge of the Syrian Ministry of Justice, posted a video on her personal Facebook account addressing Bashar Al-Assad, in his capacity as President of the Republic and head of the Higher Judicial Council, and asked him to stop her sister, Khuloud Khair Baik, from abusing her. According to Futoun, Khuloud has a criminal record. She was arrested in 2010 over fraud offences against the Syrian government and its citizens, and also has pending cases of attempted murder and abuse of power.

Futoun said that her sister Khuloud has dragged her name in a case of attempted murder through high-ranking officers in the Syrian Army and the security services, with whom Khuloud has strong links. Futoun named these officers: Brigadier General Qusay Abbas and Major General Ghassan Bilal. Both are senior commanders in the 4th Armored Division, led by Maher al-Assad, brother of the Syrian President Bashar al-Assad.

Futoun decided to flee the tense environment, so she took a leave and travelled to the United Arab Emirates. However, as soon as she arrived there, Futoun learned that her name was dragged in a 12-year-old case of attempted murder. Futoun accused the Minister of Justice, Ahmed al-Sayed, and the Minister of Interior, Muhammed Rahmoun, to be behind this act and asserted that lawyers were not given access to the case file. Subsequent to that, Futoun was prevented from selling her property, including her law office in Khaled Ibn Al Walid Street, Damascus.

Afterwards, on 5 June 2022, Futoun confirmed in a Facebook post that she has left Syria legally after obtaining a leave from the Minister of Justice. This likely means that her criminal record was cleared, otherwise she would have been arrested at the airport or the borders.

Dismissal for Alleged Contempt of Instructions of the Executive

Futoun’s accusation that members of the Executive branch are framing her sparked controversy in the country and prompted the Executive branch to take action in the case. On 27 June 2022, Syrian President Bashar al-Assad issued Decree No. 175 of 2022 which dismissed Judge Futoun. This decision was justified by accusing Futoun of committing alleged legal errors and violations.

With this decision, the Executive struck down all existing legal provisions that guarantee the immunity of judges, which allow them to conduct their work transparently. Furthermore, this decision sent jurists and lawyers a clear message that none of them is immune from the power of the Executive and its security organs.

Judge Futoun’s case revealed the fragility of judges’ independency and immunity enshrined in the constitution and confirmed that the Executive is the highest power in the State and not the law.

The 2012 Syrian Constitution in force states:

These texts are supposed to shield any influence or pressure which may be exerted on judges by powerful individuals or members of the Executive branch.

However, Judge Futoun fled Syria fearing the brutality of security officers who are subject to no authority or law. Thus, the law and judiciary could not protect Futoun, nor even open an independent and transparent investigation into the accusations against her.

Consequently, at any time Syrian judges may arbitrarily be stripped of their profession, property, or even life amid the ascendancy of security forces and the Executive through force and violence and the ineffectiveness of immunity laws.

Syrian judges of all ranks report to the Supreme Judicial Council, charged with the appointment, transfer, and dismissal of judges. The Council is headed by the President of the Republic (head of the Executive branch), thus the judges are subordinated to the President. Paragraph 1 of Article 133 of the Syrian constitution in force states:

Allegedly, trials of judges for offences they commit in work and personal life are conditioned with the special guarantees and immunities judges are supposed to enjoy.

Article 114 of the Judicial Authority Law states: “The Public Prosecutor’s Office shall be competent to institute public litigations against offences committed by judges in their work and personal life. The litigations conducted either under a permission from the President of the Court of Cassation and two of its most senior advisors or upon a request from the Supreme Judicial Council when the disciplinary trial proves a crime.”

The powers of the President of the Supreme Judicial Council and his deputy to initiate public proceedings against the defendant judges lead to a pervasive atmosphere of fear and insecurity among them, which negatively affect their work.

The lack of independence of the Syrian judiciary due to the powerful hand the Executive Branch has over the judiciary strips Syrian judges from any kind of government protection or immunity. The President of the Republic and his executive arms, including security officers and ministers, can, at any time, initiate public litigation against judges through the Minister of Justice, the operational arm of the Executive Branch in the judiciary which appoints the public prosecutor and supervises his work. Thereby the professional and personal lives of the judges in Syria always are always threatened in one way or the other by an Executive Branch which is beyond the law.

There are two authorities empowered to issue permits for trying accused judges:

It is notable that this Article is too broad since it does not define the remiss and violations that entail accountability.

The Executive Authorities could take advantage of the ambiguity of this Article by considering any contravention of any of the instructions of the Minister of Justice or the President of the Republic a prejudicial to the honor of the judiciary or a violation of the public regulations.

Here, it is worth noting that the Supreme Judicial Council could suspend the judge in case the discipline trial proves a crime against him/her.

According to paragraph 2 of Article 111 of the Judicial Authority Law, the accused judges undergo secret trials, which prevent those judges from the public’s support, which could shape public opinion on their cases. Furthermore, judges are denied the right to defend themselves and even denied access to their cases’ files and thus do not know the charges against them (as stated by Judge Futoun Kair Baik).

Which Court Can Prosecute Judges?

Article 115 of the Judicial Authority Law the general board of the court of cassation, dealing with criminal cases, is the highest judicial authority that is supposed to guarantee the judge a fair trial.

However, in practice, decisions of the general board of the court of cassation cannot be independent in light of the fact that the President of the Republic and the Minister of Justice of the Executive Authority are actually truly in control of the judiciary system. This means that if the Executive orders the punishment or dismissal of a judge, the cassation cannot make a different decision.

The court may decide to suspend the defendant judge. This decision is considered effective immediately after the issuance of the arrest warrant against the judge or from the date he/she quits the profession – in case he/she did before the issuance of the warrant of arrest. The court may annul the suspension decision against the judge and release him/her following the issuance of a final judgment ruling his innocence. It should be noted that defendant judges are held in a special room in the Palace of Justice.

If the court issued a default judgment against the judge, the latter could appeal within five days after being notified of the judgement. This is according to paragraph 17 of Article 116 of the Judicial Authority Law, which sates: “Judgments and decisions issued by the Court of Cassation in accordance with the provisions of this chapter are final and not subject to any kind of review except for judgments in absentia which can be appealed within the five days following the day of notifying the judgement.”

In light of these findings, legal experts with STJ recommend: 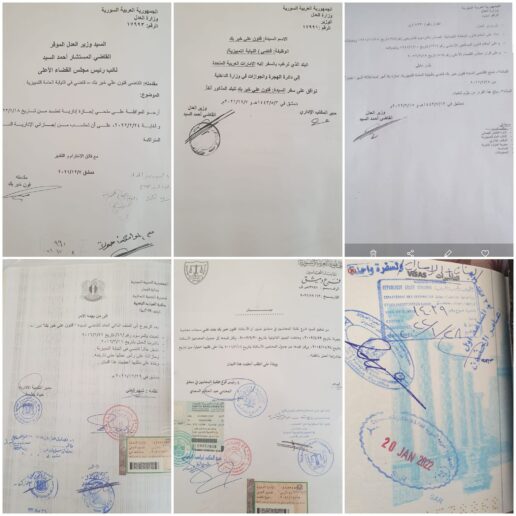 Image (1) – a set of documents published by Judge Futoun Khair Baik in which she confirms that she obtained a travel permit from the Minister of Justice and a regular departure from Damascus Airport.