September 10, 2019 2.6k views Download as PDF This post is also available in: Arabic Font Size A A A 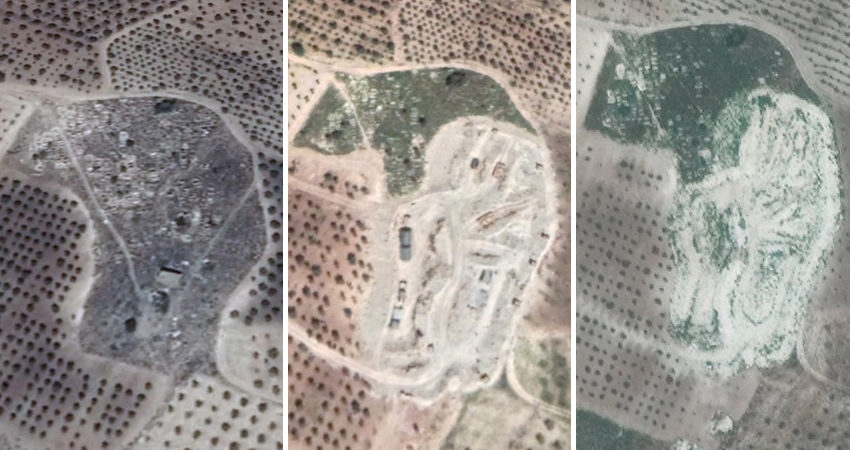 Satellite images show how the cemetery and the shrine being bulldozed completely. The images from left to right were respectively taken in 2017, 2018, 2019.

Violations by the Turkish military and rebel allies against Afrin and its people have been numerous since the launch of the military operation till after seizing full control of the city and its surroundings, on March 18, 2018.[1]

Taking over Afrin after a week of fierce battles with the Autonomous Administration’s People’s Protection Units (YPG) in the context of the Operation Olive Branch, the Turkish forces bulldozed a large part of the 400-year old,[2] al-Foqania Cemetery (the Upper Cemetery), in the village of Sinnara (Senarê) of the Shaykh Al Hadid district, rural Afrin. They also completely demolished its historic shrine ‘Ali Dada’.

According to STJ field researcher, the bulldozed cemetery contains the graves of Sinnara and Anqala (Anqelê) villages’ people.[3] It also contains a shrine dates back to 1636; hence its importance. Those two villages located to the west of Afrin, 4 to 5 km from the Syria-Turkey border. The population of Sinnara reached three thousand people in early 2018, while that of Anqala was about two thousand people then.

In a separate incident, on August 12, 2018, the Turkish army completely bulldozed the Martyrs’ Cemetery (also known as the Martyr Avesta’s Cemetery), which is located on the way to the village of Marateh, in Afrin. This cemetery was established during the Operation Olive Branch and contains about 200 graves of YPG fighters and civilians from Afrin who fell in the battles.

Further, the Martyr Seydou Cemetery, in the village of Kafr Safra of Jindires district, rural Afrin, which contains the graves of YPG fighters, was partially destroyed as a result of artillery shelling on February 5, 2018, by the Turkish army and allied opposition groups in the context of the Operation Olive Branch. As reported by STJ field researcher. He added that the village of Sinnara has another small cemetery called the al-Tahtaniah Cemetery (the Lower Cemetery)-which never been bulldozed- located in the west, on the road to the Shaykh Al Hadid district.

The lower image is from Google Earth, shows the shrine and the cemetery on September 1, 2017.

The upper image shows the ‘Ali Dada’ shrine before being demolished by the Turkish forces and a side of the cemetery before being bulldozed. Photo credit: Senarê News Facebook page.

The lower image is from Google Earth, shows the shrine and the cemetery, on September 1, 2017.

(Mahmoud.S.A), a local of Sinnara, who is currently residing in Europe, considered bulldozing the al-Foqania Cemetery and the demolish of its historic shrine, a crime that infringe on the cultural of his ancestral heritage. Mahmoud told STJ that in the first half of March 2018, less than two weeks after the Turkish army and allied Syrian opposition groups took control of the town of Sinnara, he learned through his relatives in the village that the Turkish army bulldozed the al-Foqania cemetery with the aim of establishing a military base there. He added:

“No one of our village’s people dared go near the cemetery to verify the news we had heard. So, I asked an elderly man from the neighboring village of Anqala to try to take a photo of the cemetery, but he wasn’t even able to do that, since photography is banned by the al-Waqqas Group, which had arrested many people from the two villages for this reason and held them for months before being bailed out. In early April 2018, however, the news of bulldozing a large part of the village’s cemetery was confirmed by a local driver, who inquired about that from a Turkish soldier of Kurdish origin-who got into his car to drive him somewhere. The soldier confessed the bulldozing of a large part of the cemetery and finding two bodies haven’t decomposed yet. I suggested that one of those two bodies are for my uncle who passed in late 2017 at the age of 70 and the other for an elderly man from the village who died after him.”

Mahmoud added that the Turkish Army bulldozed all of the graves of his family members and haven’t established a military base on the cemetery ground as planned. However, in Eid al-Fitr, on June 15, 2018, the Turkish army allowed the villagers to visit the graves of their dead in the cemetery, and then they saw it razed with their own eyes.

“After the Turkish Army bulldozed two-thirds of the cemetery, including the historic shrine, its soldiers withdrew and the cemetery was opened to the public again. My relatives in the village confirmed to me that about 500 graves were bulldozed including those of my father, uncle, grandfather, who died in 1915, and others of my dead relatives, which are all located near the ‘Ali Dada’ historic shrine north of the cemetery. Despite entering the cemetery, still they did not dare taking photos, for fear of possible retribution by the Turkish forces and allied Syrian armed groups who showed no mercy and committed atrocities against defenseless civilians in Afrin and its suburbs, who have no choice, but to show patience.”

“What happened was terrible, many people of our village, Sinnara, and the neighboring Anqala, lost the graves of their relatives and loved ones. The Turkish Army assumes the whole responsibility of this violation. We call on the UN and Syria’s stakeholders to put an end to the violations committed by the Turkish military and allied rebel groups against Afrin’s people, culture and heritage and to end their occupation of the city.”

A Google Earth image illustrates the bulldozed cemetery and shrine. It also shows military vehicles stationed on the hill. The square on the right shows the damage caused to the agricultural land surrounding the cemetery. 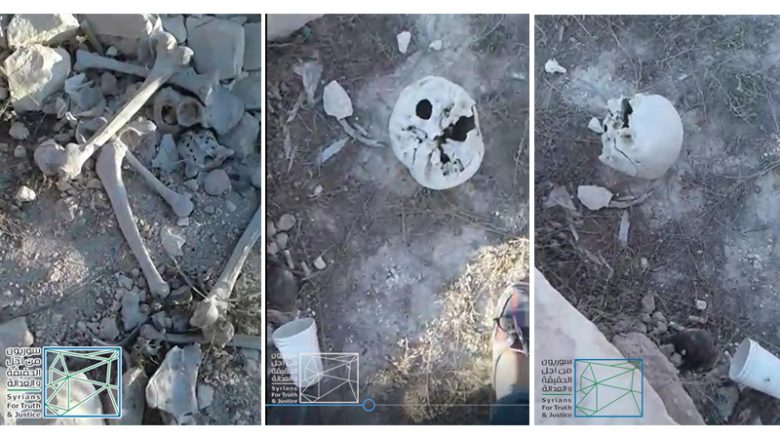 Screenshots taken from the second footage show remains of the dead whose graves were bulldozed by the Turkish forces in the al-Foqania Cemetery. Credit: STJ. 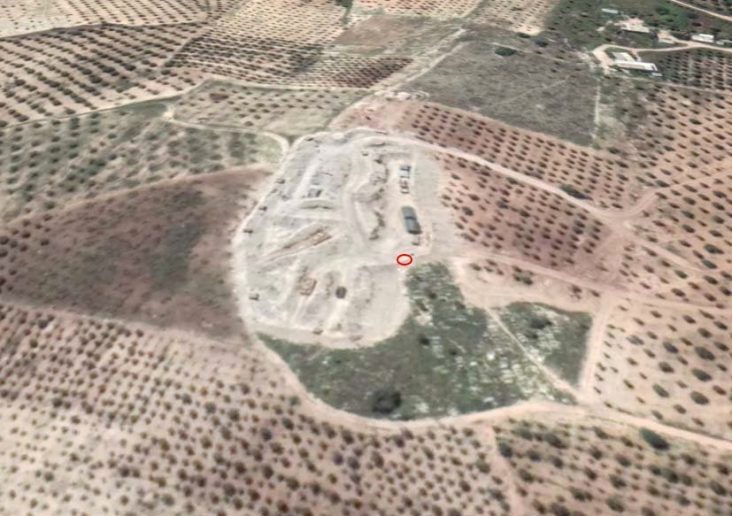 The red circle indicates the approximate position at which the first footage was filmed, in August 2018. 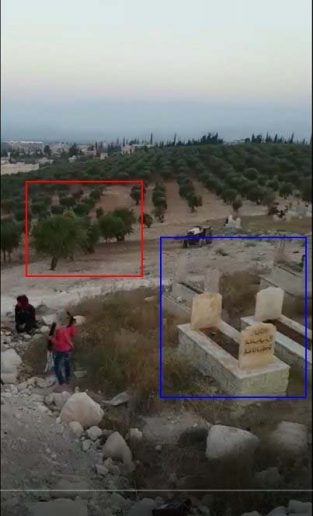 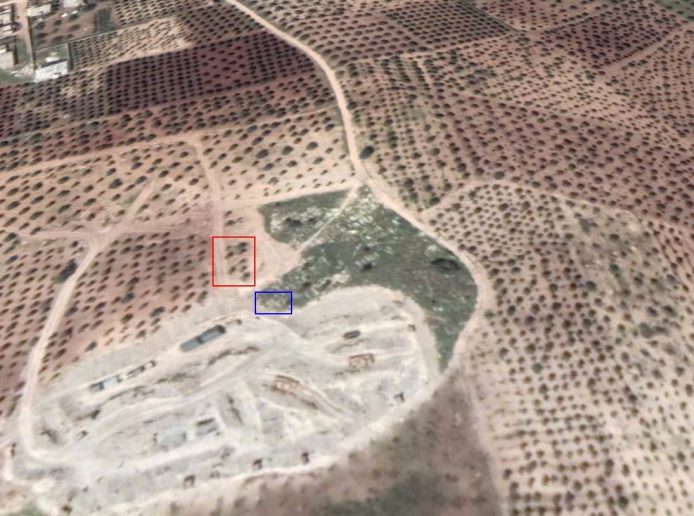 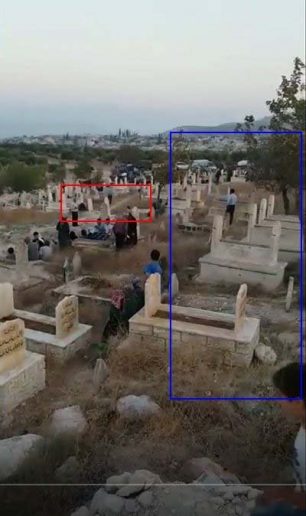 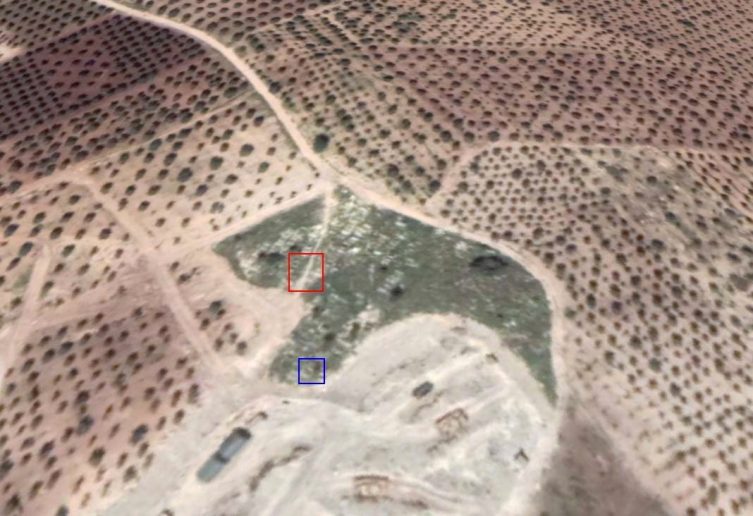 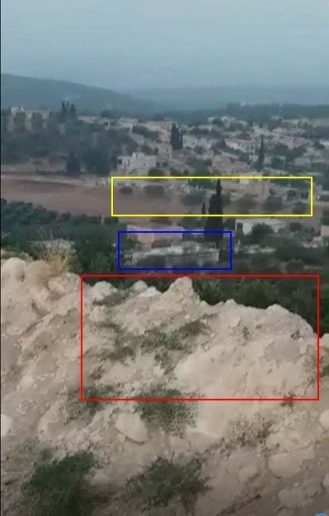 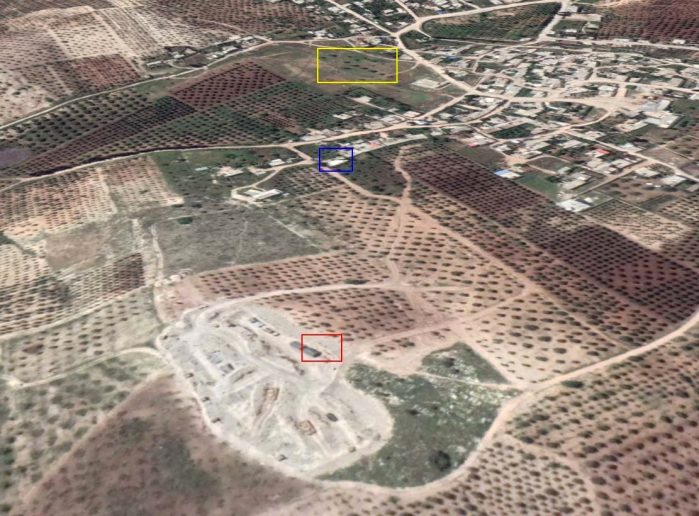 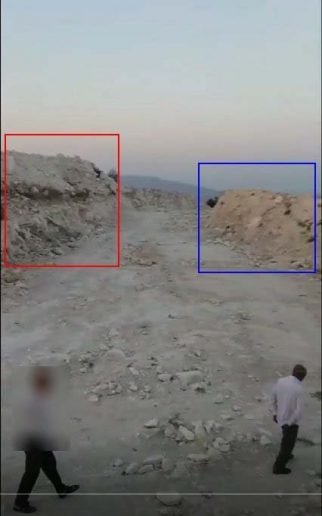 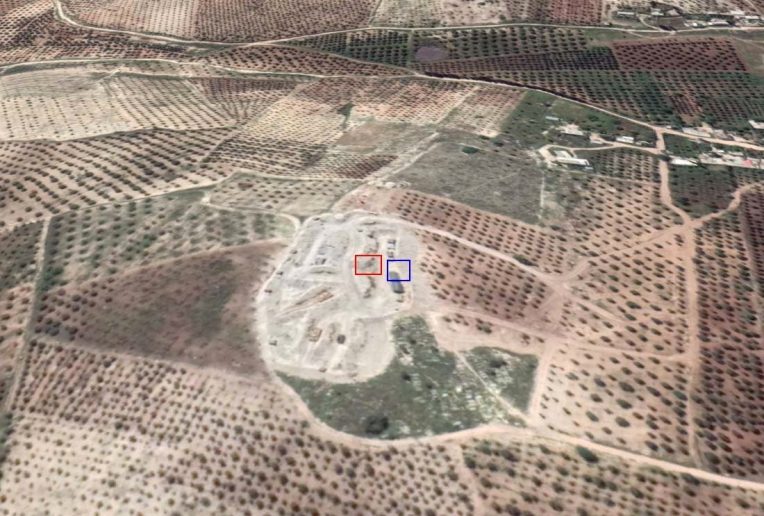 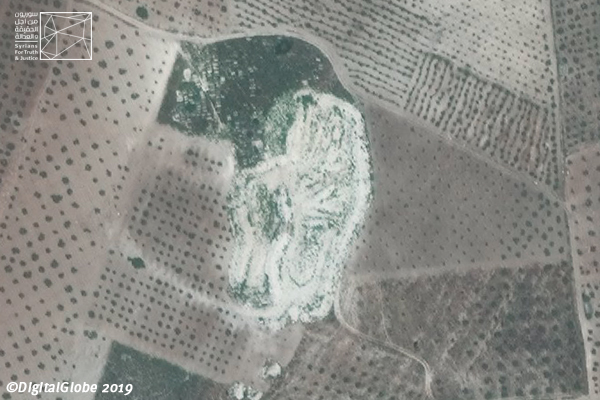 Image, captured by DigitalGlobe, shows the cemetery after the Turkish military base being removed, May 21, 2019. 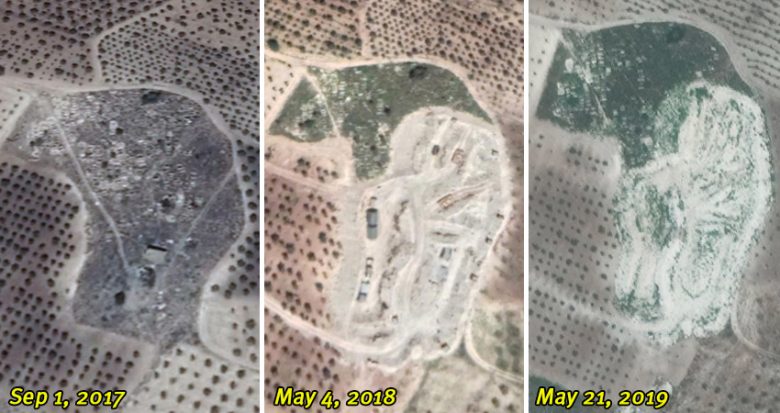 Satellite images show how the cemetery and the shrine being bulldozed completely. The images from left to right were respectively taken in 2017, 2018, 2019.

[1] The Turkish armed forces announced the start of Operation Olive Branch on January 20, 2018, with the support of Syrian armed opposition groups, aiming at taking control of the city of Afrin. The battles ended after 59 days, on March 18, 2018, as the Turkish Army and allies entered the city center.

[2] According to the website (ciyaye-kurmenc.com), the village is 500 hundred years old.

[3] The two villages are controlled by the al-Waqqas Group, which is one of the armed groups fought alongside the Turkish Army in the Operation Olive Branch.

UNGA - Call for action regarding the situation in the Afrin - Syrians for Truth and Justice September 20, 2019 - 1:07 am

[…] exercises in a Syro-Hittite temple dating back to 1300 B.C., and destroying Afrin’s historic https://stj-sy.org/en/syria-new-visual-evidence-of-bulldozing-the-ali-dada-historic-shrine-in-afrin/ “Ali Dada” […]

Reply
“Blind Revenge”: Cemeteries and Religious Shrines Vandalized by Parties to Syrian Conflict - Syrians for Truth and Justice July 16, 2021 - 5:03 am