STJ recommends that the Government of Syria revise its legislation on tenancy and write a comprehensive, non-discriminatory law which treats all Syrians equally 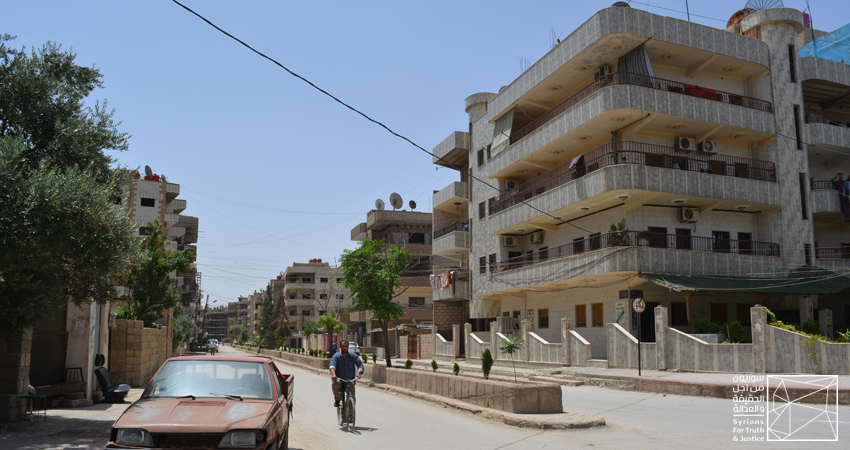 One of the main streets in Syria’s northeastern city of Qamishli. Taken by: Journalist Jano Shaker. Credit: STJ.

In 2015, Syria passed Law No. 20, which regulated certain lease agreements. This law was routinely criticized because its vague and problematic application. In the present paper, Syrians for Truth and Justice (STJ) delves into the debate around Law No.20 and provides recommendations may help better implement it.[1]

Notably, the law does not apply to:[3]

As described above, Law No. 20/2015 excludes from its coverage the lease of certain types of real estates, such as agricultural and the state-owned properties, referring them to other laws. Although the mechanism of leasing these types is different others, it is better to have a single law that covers all rental matters. This comprehensive law must be clear so that both enforcers and citizens can thoroughly understand it, thus facilitating rental procedures.

The imposition of obtaining security clearance to conclude a leasing agreement is one of the biggest hindrances to lease operations in Syria. This imposition is not a legal requirement, but a condition imposed by the Executive Branch. The administrative units forward leasing contracts to security branches to approve or reject after checking the security records of the contractors. The security forces often reject the lease contract if one of the contractors is wanted for security services, the judiciary, or for compulsory service. Furthermore, if a woman is a party in a lease agreement, the security services check her husband’s security record; if it contains “impurities” the contract will be rejected. As such, many families have been prevented from their right to lease.[14]

This illegal procedure is considered an intervention from the Executive in the mandate of the Legislative Authority.[15]

Many tenancies are still governed by the older Legislative Decree No. 111/1952, under which contracts concluded for indefinite periods and which’s terms tend to favor tenants’ interests. However, Law No. 6/2011 gives the landlord the right to terminate a rental agreement still governed by the old laws if he compensates the tenant; the compensation amounting to 40% of the value of the rental. Nonetheless, this law excludes from its coverage premises leased to the state and those owned by it.[16] Thereafter, Law No. 20/2015 removes protection from premises leased for public entities except those used as educational institutions or schools and those used by ministries,[17] unless the ministry decides to dispense the rented real estate for being in excess of its need.[18]

Furthermore, rents payable under contracts governed by the old laws have fallen short of the escalating cost of living. The adjustment of these rents requires the landlord to file a case – once every three years – to the reconciliation court which will appoint a real estate expert to assess the market value of the real estate. Afterwards, the annual rent will be fixed at 5% of the market value of the real estate, if the purpose of the rental agreement is residential, and 7% if it is commercial.

It is unfair for the landlord to compensate the tenant with 40% of the value of his/her real estate to retrieve it. This makes the tenant a co-owner of the property, which violates the right to property enshrined by the Constitution,[19] as well as Article 768 of the Syrian Civil Code that states: “Legal owners have the exclusive right to dispose, use, and exploit their property within the limits of the law.”

Law No. 20/2015 gives undue advantages to certain individuals and public entities in breach of the principle of equality before the law.

Article 7 of this law forces the tenant to evict the real estate under the landlord’s demand, provided the latter need it for his/her housing and has no other real estate. However, the Article excludes tenants who, or their spouses, are employees, servants, or workers governed by the Basic Law of State Employees. It also excludes military personnel or employees in public and joint sectors as well as public servants whose service can be legally terminated for any cause other than death and are entitled to pension, including disability pension and old-age pension.

However, this exemption does not apply in the case the landlord is a worker, employee, servant, or a military personnel who was transferred to the town of his leased property or returned to it after retirement or demobilization.

If the landlord or his spouse has the aforementioned reasons for protection, he or his heirs may file for the eviction of the tenant. The eviction requires a notice period of three months.[20]

However, the article stipulates that the real estate shall be protected against eviction if the tenant was martyred or went missing during military operations or was captured and his household members continue to occupy the rented property and have not been granted housing from the state. The household members here means the wife and the children, together or separately, as well as parents or siblings who were provided for by the tenant and living with him. For this, the tenant’s martyrdom or missing or captured status must be proved by a report from the Ministry of Defense.[21]

That said, everyone who is familiar with the Syrian situation during the conflict, knows that the Syrian government recognizes only martyrs, missing persons, and prisoners loyal to it.

Furthermore, the law giving protection to state employees, military personnel, and martyrs’, whether they are landlords or tenants, is a clear violation of the constitutional principle of absolute equality between Syrian citizens. [22] These provisions imply nothing less than a State’s attempt to evade responsibility to secure housing for those families at the expense of citizens.

Among the most important problems within the law it that it does not lay out a clear method of addressing communally owned real estates. The Law stipulates that leases’ registration applications are only accepted from the full owner of the leased property or the person who owns 75% of the shares listed in the property’s real estate records. This may be proper in a steady state, which is not today’s Syria, where half of the population is internally or externally displaced or disappeared. This provision presents us with a real problem; in the case co-owners who have 75% or more of the property are not available, the other co-owners with lesser shares cannot lease the property.

Moreover, the issue becomes more complicated when one or more of the co-owners become out of reach for several reasons, including being missing, displaced, or arrested. Even if the displaced or migrated co-owners are available to contact, they cannot conclude legal authorization to the other co-owners inside to lease the property if they are wanted for security forces for being opponents to the regime.[23] Moreover, the regime’s frequent refusal to issue death notifications to those deceased in areas out of its control prevents their heirs from leasing the properties they left behind. This is because the law requires the heirs to obtain documents confirming the death of the deceased.[24]

Law No. 6/2001 limited advance payments of rent to a maximum of three months’ rent.[25] However, Law No. 20/2015 removed the ceiling of the advance payments for leasing agreements concluded after Law No. 6/2001 came into force,[26] but keeps it on those concluded for indefinite periods under old laws. This means that the landlords of properties leased from 2001 onwards can demand tenants the advance payment of a year’s rent or more. This will intensify the burden placed on tenants, especially amid the country’s dire economic situation resulting from the ongoing war.

Law No.20/2015’s failure to address all aspects related to tenancy, including those newly emerged during the war, results in problematic and unfair leasing agreements. Furthermore, the discriminatory provisions included in Law No.20/2015 and the Executive’s interference in its application makes it weak.

To address these issues, STJ offers the following recommendations to relevant authorities:

[3] Note: Law No. 6/2001 excluded the same contracts in Article 13, leaving their regulation to special laws or to the Civil Code.

[5] Article 18 of Legislative Decree No. 20/1964 states: “Contracts of leasing and investing in real estate of the Hejaz railway are not concluded according to tenancy laws. The administration of the Hejaz railway choses to bid between applicants willing to invest in these estates or to sign with them directly depending on the interest of the Railway.”, the Ministry of Transport’s website, http://mot.gov.sy/apps/library/download/?id=208

[14] Failure to obtain security clearances, many families asked their friends, with clear security records, to conclude the leasing contracts in their names.

[15] STJ talked to four women in Damascus who failed to lease houses, due to their husbands being defaulted from compulsory or reserve military service. Each of those women has two children at least. Two women joined their husbands in Lebanon and the other two stayed in relatives’ houses in Syria until finding a solution to their issue.

[19] Article 15 of the current Syrian Constitution.

[23] “Above the Judiciary and State Institutions: The Powers of the Syrian Security Services”, STJ, 7 October 2022, https://stj-sy.org/en/above-the-judiciary-and-state-institutions-the-powers-of-the-syrian-security-services/ (Last accessed: 28 December 2022).

Syria: Visual Analysis of the Bloody Attack on...

Arbitrary Detention and Torture are a Systemic Oppression...