Syria: A Timeline of the Siege of Daraa al-Balad 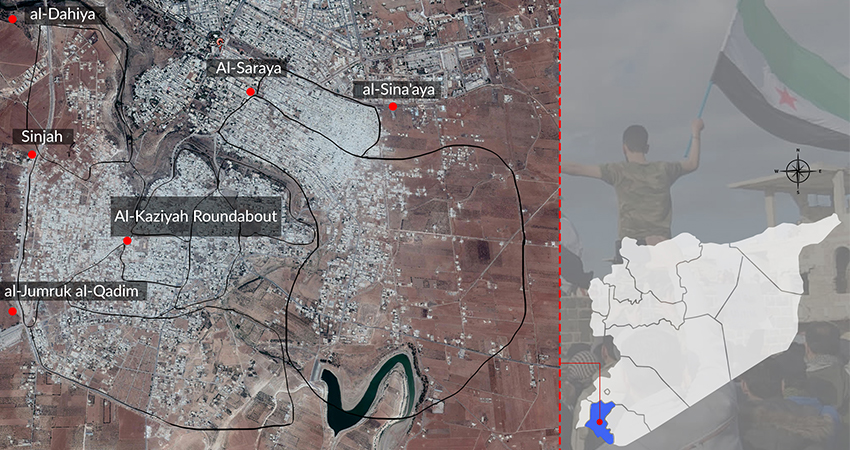 A map created by STJ which shows where government checkpoints have been established throughout Daraa al-Balad.

Syrian armed opposition groups—particularly, the al-Jabha al-Janoubiya (Southern Front) and a number of Islamist military factions stationed in the Yarmouk Basin and on the outskirts of the Lajat area— maintained control over large areas in Daraa province, in southern Syria, for several years. However, in mid-June 2018, Syrian government forces, backed by Russian forces, launched a large-scale military operation into the region and retook it.

Figures published by the United Nations (UN) demonstrate that the 2018 military operation displaced over 270,000 people, while field researchers with Syrians for Truth and Justice (STJ) collected data indicating that the number of people displaced likely exceeded 400,000 persons.

In the aftermath of the military operation, the Syrian government, on 6 July 2018, signed a deal— today known as the “settlement agreement”— with the armed opposition groups that had controlled Daraa province.

To restore control over Daraa province, government forces started their military operation in the Lajat region, in the province’s northeastern countryside.

From Lajat, government forces headed south, towards Buser al-Harir town. They had the town in their grip almost 10 days later, on 26 June 2018.

After Buser al-Harir, the armed opposition groups lost control over several cities and towns, including the town of Nahta and the cities of al-Hrak, al-Malihah al-Sharqiya, and al-Maliha al-Gharbiya, as well as the military base of the 52nd Mechanised Brigade, which was located on the administrative border between Daraa and As-Suwayda.

The military operation waged against Daraa by government forces and the Russian air force widened the rift between armed opposition groups and increased intra-factional disputes. Some of the armed groups advocated for negotiating with the government, which would practically force them to surrender control over the area to government forces. Other factions opted for resistance and the continuation of the fight against government forces.

Later, after government forces seized control of the towns of Saida, al-Naimah, and Om elmiathin on 5 July 2018, all the armed groups operating in Daraa’s eastern countryside acceded to negotiations and surrendered their areas of control. Simultaneously, armed groups in Daraa al-Balad and Daraa’s western countryside continued to combat government forces’ advances on the ground.

On 6 July 2018, government forces entered the Nassib Border Crossing—called Jaber Border Crossing on Jordan’s side. That day marked the signing of the “settlement” agreement between representatives of the Syrian government and the larger percentage of Daraa’s armed opposition groups. Notably, the agreement was signed in the presence of a large Russian delegation, but without Iranian participation. The agreement was first enforced in the city of Busra al-Sham and then in other areas across Daraa province.

The Yarmouk Basin, west of Daraa province, was left outside the settlement and was eventually militarily controlled by government forces sometime between late July and early August 2018. The basin, for over two years, was controlled by the Islamic State (IS) and the two extremist groups the Islamic Muthanna Movement and Khalid ibn al-Walid Army— who pledged allegiance to IS.

None of the parties in the Daraa settlement officially published the terms agreed upon, nor the signed text of the agreement itself.  Instead, the committees that negotiated on behalf of Daraa’s population— consisting mostly of military figures— revealed only a few of the settlement’s terms in the form of statements to the media, but they did not present media outlets with an official copy of the agreement.

According to the statements made by members of the negotiating committees, the “settlement” agreement provided for:

“Surrendering border crossings and the heavy and medium weapons the armed opposition groups possessed to government forces, re-operating government departments and allowing government employees to resume their work, legalizing the status of the area’s wanted civilians and fighters, and providing male locals at the age of compulsory military service a period of six months to join the military, as well as putting an end to arrests, security raids, and releasing detainees.”

Field researchers with STJ confirmed that these were mostly the terms of the “settlement” agreement signed between the Syrian government and Daraa’s armed opposition groups. The field researchers verified the terms through cross-checking available information on the agreement and interviewing one of the individuals who attended the meeting held on 6 July 2018, during which the terms of the agreement were recited before the attendees. The attendees included a high-ranking Russian officer, believed to be Alexander Zorin, Ahmed al-Awda— commander of the former opposition armed group Shabab al-Sunnah (Youth of Sunnah), which was later turned into the Russia-backed 8th Brigade, operating under the 5th Legion— and Kenana Hawija—a representative of the Syrian government—, in addition to dignitaries from various cities and towns in Daraa province.

The source informed field researchers that during the meeting the Russian officer advised Daraa’s locals against leaving the province for Idlib, because Idlib will witness military operations in the future.

The rifts the agreement triggered were not limited to armed opposition groups. The agreement also divided fighters and the civilian population into two groups. One group refused to sign the agreement, interpreting it as a reconciliation with the Syrian government. We will refer to this group as the “unreconciled group”. The unreconciled group consists of approximately 12,000 persons, among them opposition fighters, their family members, and civilians, mostly from the provinces of Daraa and Quneitra.

The parties to the “settlement” agreement held several rounds of negotiations to discuss the fate of the unreconciled group and ultimately decided to relocate them to Northern Syria.

The second group, who remained in the province, included fighters, civilians, and activists. Most of the people within this group agreed to sign the “settlement” agreement. Therefore, we will refer to this group as the “reconciled group”. However, signing the agreement proved futile as government security services continued to harass many of the reconciled persons; arresting some and later assassinating others.

Among the fighters, four distinct sub-groups are identified in relation to the “settlement” agreement with the Syrian government:

Under the 2018 agreement, Syrian government forces were deployed across Daraa province and reestablished their security rule over the area. However, a few areas of the province, especially in Daraa al-Balad, Tariq al-Sad neighborhood, and Daraa Camp for Palestinian IDPs, remained outside the government’s security service’s grip, even though state service departments resumed operation there, including police departments, local administrative directorates, and healthcare centers.