Russian Jets hit IDP settlements in Hass and Ma'aret Hurmah on August 7 and 16, 2019

September 2, 2019 250 views Download as PDF This post is also available in: Arabic Font Size A A A

Syrian and Russian forces continue to bomb southern Idlib, even after retaking the strategic northwestern town of Khan Shaykhun and all northern rural Hama, except for the area where the Turkish military observation point is stationed, near the town of Morek.[1]

The control over those areas declared on August 21, 2019, after fierce battels between the Syrian Army and allied militias on the one hand and armed opposition groups like the Army of Glory/Jaysh al-Izza and Jihadist groups like Hay’at Tahrir al-Sham (HTS) and the Turkistan Islamic Party on the other.

The Syrian government and its ally Russia continue to bomb densely populated areas, causing many civilian casualties and severe damage to the infrastructure. STJ has documented the death of, at least, 26 civilians, including 8 children and 9 women, in two separate attacks on IDP settlements in Hass and Ma’aret Hurmah.

The Syrian Army and allies have stepped up a large-scale offensive on the province of Idlib and northern parts of Hama, concurrently with the 12th round of the Astana process Syrian peace talks in April 2019. The assaults continued even after the end of the 13th round of Astana Talks, on August 2, 2019 and despite the truce ratified by belligerents. The continued escalation caused mass displacement in the affected region, especially in areas close to the front lines. STJ field researchers, local activists and relief workers confirmed that the recent military operations led to the displacement of an estimated 750.000 people, mostly from northern rural Hama, Khan Shaykhun town and other areas in southern Idlib. Most of these escapees headed towards areas at the Turkey-Syrian borders.

The ongoing military operations in southern Idlib have been monitored by STJ field researchers who confirmed that the government forces managed to regain full control over northern rural Hama, including the town of Khan Shaykhun, reaching off the town of Kafar Sijnah in southern rural Idlib on August 21, 2019.

Southern rural Idlib witnessed sporadic but continued waves of displacements during the last four months. Muadh al-Abbas, a field activist, told STJ that according to relief organizations figures, some 728799 people have fled their hometowns since the beginning of Idlib offensive, most of whom headed towards the agricultural lands close to the borders with Turkey, specifically in the town of Atme and in Bab al-Hawa village, near Idlib highway. Most of them stayed in tents since they can’t afford the high rents of houses.

Only very limited in-kind assistance reached the IDPs, encompassed baskets of a few cans of legumes and drinking water, according to al-Abbas.

The majority of those IDPs was from the town of Khan Shaykhun; among them were 80.000 indigenous people and 30.000 IDPs. The intensive bombardment, which targeted mainly the infrastructure and the medical facilities, forced them to flee their homes, as reported by the field activist Hamid Qattini. The IDPs are currently staying in tents on agricultural lands and enduring dire humanitarian conditions. noting that most of them were living below the poverty line even before displacement.

The Response Coordination Group, in turn, released the results of its statistics on the IDPs resulted from the recent offensive which revealed that more than 197.000 people have been displaced from areas close to frontlines in southern Idlib, which was been heavily bombarded, from 11 to 21 August 2019.

a. A massacre in an IDP settlement near the town of Hass: on August 16, 2019, the ‘Al-Rahma residential village’, which is located near Hass and houses IDPs, was subjected to aerial bombardments, which resulted in the killing of 20 civilians, including 6 children, an infant and 8 women, and caused sustained injuries of varying severity to more than 50 people, including children and women.

Witnesses and survivors of the attack confirmed that the targeted area was entirely civilian. As it is a residential complex established by the Mercy International Association-based in Kuwait- in 2016. According to a report published by the Al-Wafa Organization, which is active in the area, the targeted residential complex encompasses 7 concrete buildings, each consists of 24 residential units. It is currently inhabited by 150 displaced families (750 people), including 30 persons with special needs in addition to 20 orphaned children. Those IDPs mostly came from rural Hama, Aleppo and Deir ez-Zur.

Abu Baher, a monitor at a ‘local observatory’ who watches warplanes’ movement in the area’s skies with a special device, confirmed to STJ that the jet which hit the residential village had taken off from Khmeimim Air Base. He went on to say:

“On the evening of August 16, 2019, specifically at 07.02, a warplane with the code 1001 and the No. 270, took off from Khmeimim Air Base and conducted several rotations over southern rural Idlib and northern rural Hama. At 07.17 p.m. it raided the residential village and then raided the al-Kabina area in rural Latakia, which is witnessing fights between the government forces and armed opposition groups, including HTS.”

Ahmed Bakkour, a survivor of the massacre, said in the same regard:

“Surveillance planes were hovering in the skies ten minutes before the air raids were conducted. It was like a scene from doomsday; windows and doors were ripped off and parts of people were scattered all over the place. We tried to take as many of the injured as we can to hospitals on motorcycles, despite the repeated warnings of the observatories from a second raid on the same site. I saw a woman holding her wounded child and cries for help and a child holding another child and running with his clothes covered with blood. It was a shock to see an embryo on the ground, I don’t know how it came out of his mother’s womb. There was also a headless child body and another dead child was pulled out from the rubble along with many others dead or injured. Words fail to describe that scene.”

On the same day, STJ field researcher reported Russian aerial bombardment on the town of Arihah, which resulted in the killing of three civilians including a child and the injury of 15 others. Four civilian casualties fell in Al-Ghadfah village, southeastern Idlib, by similar attacks. 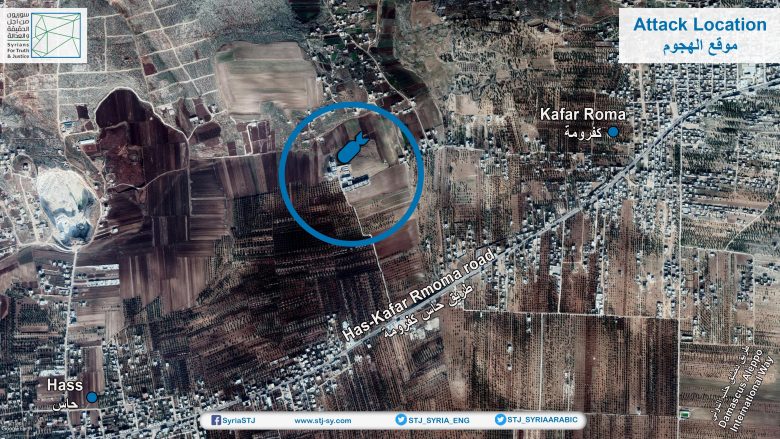 A satellite image illustrates the location of the attack. 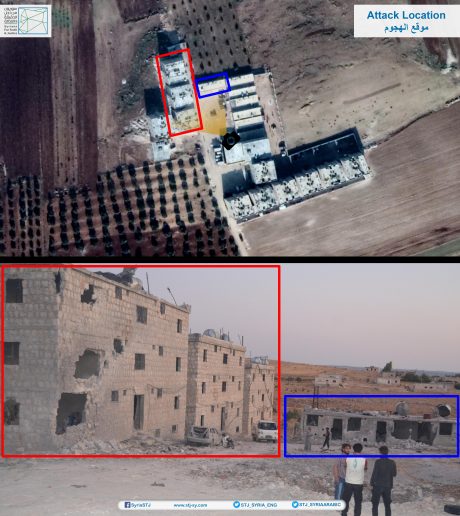 Analysis of the available visual evidence.

b. A massacre in the village of Ma’aret Hurmah: on August 6, 2019 at about 1.30pm, jet fighters, believed to be Russian, targeted a building in a complex housing for IDPs at the northern outskirts of Ma’aret Hurmah, with high explosive missiles. The attack killed three civilians, among them was a volunteer in the civil defense (White Helmets), and injured ten including children and women.

According to witnesses, the jet fighters conducted five consecutive raids on the IDP building. Abdulrazzak Samer al-Hassan, an IDP from Damascus who survived the attack, talked to STJ field researcher saying:

“The aerial bombing targeted the sixth and fifth building, where I was staying with my family, on August 7, 2019 at about 1.30pm. We heard a huge explosion then the ceiling started falling on us. The place was covered with white dust and pieces of rocket shrapnel spread in all directions. I started screaming, father, brothers where are you. My father died instantly and my brother injured. After the first two raids I harried with the other residents to the building’s basement. I couldn’t understand what was going on. Women and children were screaming out in fear. My heart had almost stopped when I heard the warplane getting closer again. My worst fear realized; the warplane hit the building again causing a huge explosion led to its collapse. We stuck in the rubble. Screams of children and women raised. I felt like it was the end and we all would die there. Fortunately, the civil defense came a little later and pulled us out. The fighter jet returned and conducted two raids on the town’s mosque destroying it completely. The rescue teams transported the injured to hospitals in Darkush and Bab al-Hawa. It was a horribly traumatic day.”

In the same context, head of the Civil Defense center in the city of Ma`arat al-Nu`man, Moutaz Mohammad al-Ali, said to STJ: the aerial attacks on the housing complex in Ma’aret Hurmahwere were conducted by Soukhoi Su-34, which took off from Khmeimim Air Base. The village is now clear of civilians, since it became a front line between the warring parties.

Residential buildings at the northern entrance to the village of Ma’aret Hurmah, hammered by aerial attacks on August 6, 2019. Photo credit: STJ.