STJ recorded over 370 incidents of violence between April and late December 2020. The targets were mostly former armed opposition group commanders and fighters.

A map showing the towns and cities where violence spiked between April and late November 2020, particularly in the western countryside of Daraa where a large number of former armed opposition fighters remain. ©STJ

Daraa province, south of Syria, continues to be gripped by security chaos, leading to assassinations and other violent incidents. These incidents occurred almost daily throughout the period covered in this report, between early April and late December 2020. They included both direct and indirect assassinations. In some cases, individuals were killed by explosive devices, during clashes, and in attacks on security services’ centers and checkpoints.

The violent attacks were aimed at both civilians and militants, including former fighters and high-profile commanders of armed opposition groups who signed settlement/reconciliation agreements with the Syrian government, as well as militants affiliated with the Syrian regular forces. Other attacks targeted individuals tied to Iranian militias or Russian forces in the region, members of local political parties affiliated with the Syrian government, Central Reconciliation Committee in Daraa (CRC) delegates, and municipality directors.

Syrians for Truth and Justice (STJ) recorded over 370 assassinations and attacks throughout the period covered occurring in different areas across Daraa province.

The greatest percentage of assassinations and attacks occurred in Daraa’s western countryside, where STJ’s field researcher reported there are still large numbers of former armed opposition fighters with light weaponry. In the eastern countryside, where a large number of Syrian regular forces and Iranian militias are positioned, similar, but less, assassinations and attacks occurred. 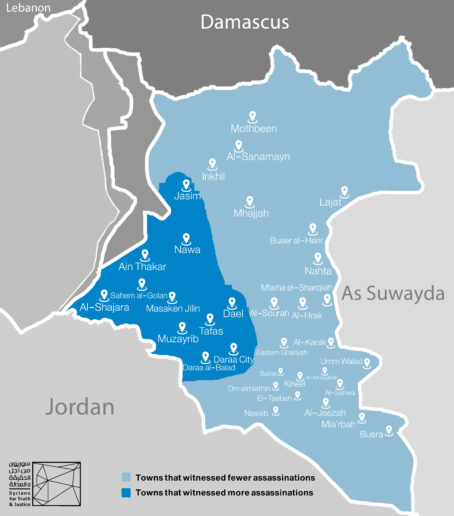 Image 1—A map showing the towns and cities where violence spiked between April and late November 2020, particularly in the western countryside of Daraa where a large number of former armed opposition fighters remain.

The perpetrators used several methods to carry out the reported assassinations and attacks. In some cases, the targets were shot or died in explosive device detonations. In other cases, unidentified gunmen shot the targeted individuals and escaped, riding motorcycles or cars without registration plates.

Additionally, during the period reported, STJ’s field researchers monitored an increase in the number of assassinations aimed at high-profile personalities in Daraa province. Some of these individuals were members of the CRC in Daraa, including Adham Al-Krad, a former key commander of the armed opposition groups. Al-Krad signed a settlement agreement with the Syrian government and subsequently became a member of the CRC, and Muhammad Jamal al-Jalm, who went by the nom de guerre Abu al-Baraa. Al-Jalm was also a member of the CRC. He once worked as a judge at the Dar al-Adel Court in Horan and had signed a settlement agreement with the Syrian government.

Violence in southern Syria corresponds to the Iranian-Russian dispute, for Moscow and Tehran each have projects in the region and are constantly competing to expand their influence and control over areas.[2] In a former report, published on 1 May 2020, STJ documented the alarming increase in the number of assassinations, kidnappings, and attacks on government security centers in Daraa province. The report recorded at least 200 assassinations and attacks between December 2019 and late March 2020 against personalities affiliated with the Syrian government or its security services.[3]

You may read or download the full report in PDF format, by clicking here.

[1] The 5th Legion consists of a number of former armed opposition groups; it was established by Russia, which brought these groups together after they signed a settlement agreement with the Syrian government. The legion is led by Ahmad al-Awdeh.