Press Release on the Russian Invasion of Ukraine

Syrians for Truth and Justice (STJ) expresses our support of, and solidarity with, the people of Ukraine 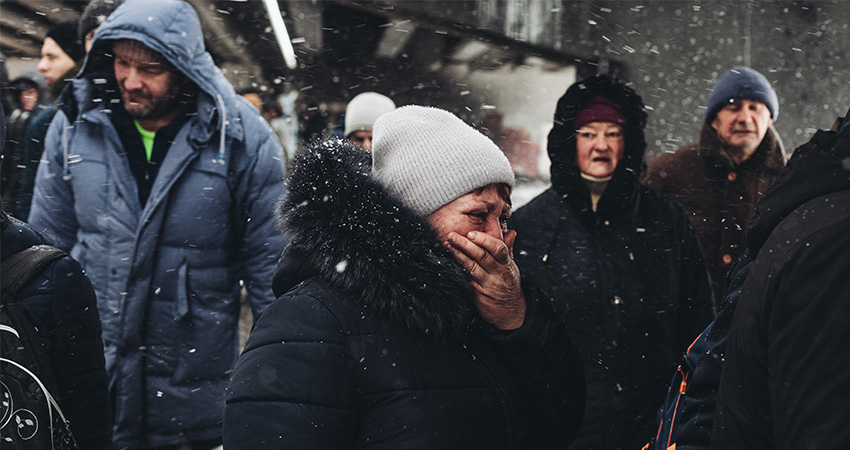 A woman cries after saying goodbye to her husband, under the destroyed bridge as civilians continue to flee from Irpin due to ongoing Russian attacks in Irpin, Ukraine on 08 March 2022. Credit: Anadolu Images.

As an organization committed to documenting human rights violations, and Syrians who are too familiar with indiscriminate shelling, occupation, and forced displacement, the team at Syrians for Truth and Justice (STJ) expresses our support of, and solidarity with, the people of Ukraine in response to Russian aggression.

Days after Russia invaded Ukraine on 24 February 2022, it has shown a disregard for the international laws to which it is a signatory country and the lives of civilians. Russia has carried out indiscriminate attacks on civilian areas and has forced more than a million Ukrainian refugees and non-Ukrainian nationals to seek safety in neighboring countries. In Russia, Russian journalists and civilians who have challenged the regime’s invasion of Ukraine have been met with censorship. Thousands of anti-war protestors have been arrested across Russia.

As a Syrian human rights organization, these scenes are only too familiar. For the past several years, we have documented the impact of indiscriminate artillery strikes – including by the Russian air force – on civilian areas across Syria. We have listened to the testimonies of internally displaced civilians and refugees who have lost access to their homes and communities as well, and monitored the violations committed in Turkish-occupied territories in northern Syria, notably in the areas of Afrin, Ras al-Ayn/Serê Kaniyê, and Tal Abyad.

We call on the international community to