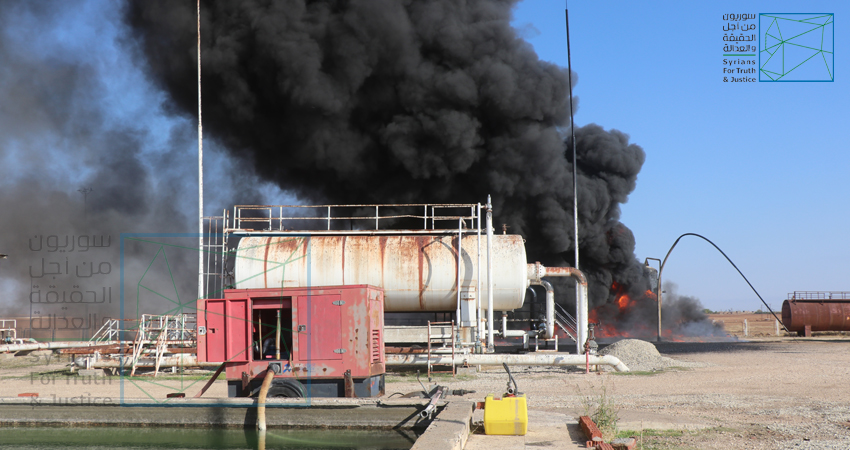 Fire in Zarba oil field, north of al-Qhataniya/Terbasbiyah city, in the aftermath of a Turkish airstrike during Operation "Claw-Sword" launched in November 2022. Credit: STJ.

Warning: The following report contains material that might be harmful or traumatizing to some audiences.

On 20 November 2022, the Turkish military launched Operation Claw-Sword in parts of Syria and Iraq. In Syria, the Turkish air force carried out a series of airstrikes on dozens of critical sites in the northeastern territories, using aircraft and drones. The airstrikes injured and killed civilians, destroyed oil infrastructure and terminals, and rendered several other energy facilities in the area inoperable.

With the new incursion, Turkey purportedly is responding to the terrorist attack on Taksim Street, for which the Syrian Democratic Forces (SDF) have denied responsibility.

In a statement on 20 November, the SDF said: “Turkey has been planning to launch a large-scale attack on regions north and east of Syria for a long time, especially after the bombing in Istanbul. The bombing is a plot of their design, a pretext they are using to threaten our areas within these regions.”

Over the first hours of the operation, Turkish airstrikes targeted a power station in Takel Bakel/Kinanah village in the suburbs of al-Malikiyah/Derik. The attack killed 11 civilians, including a journalist, and injured six others. The strike on the power station was the third of its kind.

The recent incursion was locally and internationally condemned. In a joint statement, 200 Syrian organizations renounced the renewed Turkish hostilities in Northeastern Syria. Additionally, the organizations demanded that the United Nations Security Council hold an emergency meeting regarding the military escalation, exert pressure to stop the hostilities, and act on the provisions of international law to protect civilians and infrastructure.

On the international level, Audrey Azoulay, the Director-General of UNESCO, condemned the killing of reporter Essam Abdullah in an airstrike in northern Syria on 20 November and reiterated countries’ obligation to protect journalists.

For its part, Human Rights Watch expressed concern for local communities. The organization said: “Turkish airstrikes are inflicting damage on densely populated areas and critical infrastructure across north and northeast Syria and exacerbating an already catastrophic humanitarian crisis for Kurds, Arabs, and other communities in the region.”

Despite the large-scale condemnation, the Turkish military intensified airstrikes and artillery shelling on the third and fourth days of the operation. The attacks targeted vital oil, gas, and electricity infrastructure in the countryside of al-Hasakah province, denying local communities in the affected areas and millions of residents across other Syrian territories access to energy.

Notably, Turkey launched the attacks amidst talks of potential rapprochement with the Syrian government, which remained “silent” when Ankara announced the start of Operation “Claw-Sword”. Unlike responses to the previous operations—through which Turkey occupied territories in northeastern Syria— the Syrian government only commented on the deaths of several soldiers, calling the attack on its forces an “assault.”

Similarly, the attacks were underreported by the state-run Syrian Arab News Agency (SANA). The outlet only reported that: “Suwaidiyah Power Plant went out of service . . . after it was targeted by the Turkish occupation warplanes,” while it ignored the multiple strikes on oil facilities in al-Hasakah’s countryside.

On the Turkish side, shortly after Operation Claw-Sword began, President Recep Tayyip Erdoğan reiterated the possibility of meeting his Syrian counterpart Bashar al-Assad, even before the Turkish parliamentary elections, slated for June 2023.

In this report, Syrians for Truth and Justice (STJ) presents the first-hand accounts of eight locals from the bombarded areas. The interviewees include two eyewitnesses to the Turkish massacre in Takel Bakel village, five witnesses to the shelling of several critical facilities in al-Qahtaniyah/Terbasbiyah town, and a relief worker in Hol Camp, who elaborated on the impact of the operation on relief work.

During the third raid, the warplanes bombarded the station four times. The shelling killed and wounded several civilians who rushed to the site of the attacks to assist people injured in the previous strikes.

Documenting the impact of the brutal Turkish shelling on the station, STJ reached out to the Co-Chair of the al-Malikiyah/Derik Local Council, Muhammad Abdulrahim Abdo, on 29 November 2022. Abdo narrated:

“[Turkish aircraft] first bombarded the power station in Takel Bakel village at about midnight and hit it again a few minutes later. The bombing targeted the fourth station, which provides electricity to a cluster of villages in the al-Koujarat area in al-Malikiyah’s countryside. The shelling killed one of the station’s guards, destroyed the entire station, and damaged the pump installed near it. A group of civilians tried to reach the bombarded location to check if any people at the station were injured. Once they arrived there, at around 1:30 a.m., the aircraft launched a second airstrike, killing one person and wounding another. . . Sometime later, [local council representatives], a group of civilians, and an ambulance headed to the location. We intended to inspect the place for potential casualties and to read a statement renouncing the Turkish shelling on a service facility vital to people’s livelihoods. However, we stopped at Beroj (al-Batraa/KaraJokh, Karachok) village for a while. A U.S. patrol of four armored vehicles arrived there. We could hear the reconnaissance aircraft hovering above and were cautious not to approach the location so as not to be targeted. When the U.S. patrol arrived, we decided to accompany it to the targeted location, convinced that the Turkish aircraft would not dare to target us. [We went there] because, in such circumstances, it is natural to hurry to assist the wounded. Additionally, we wanted the world to hear our voices, so we made a statement in the presence of about 20 civilians. Less than 15 minutes later, a warplane hit a location close to where we assembled. A few minutes after the U.S. patrol left, the warplane struck a second time. We were targeted with missiles four times in total. The first and second shelling caused minor injuries among us. The third shelling happened after a pause, during which civilians tried to get in their cars. On the third time, the warplane targeted a civilian vehicle that rode behind the U.S. patrol. This attack killed all seven civilians in the vehicle and two others that just happened to be nearby.”

“The warplanes targeted the station at three intervals that night. The attacks injured five civilians and killed 11 others, including journalist Essam Abdullah and the vehicle’s owner, Nazir Jwayel. Jwayel was a 65-year-old shepherd. We were shocked that the warplanes carried out airstrikes under the watch of the U.S.-led coalition forces. We were also stunned by the large amounts of ammunition used to target us. The munitions created deep holes in the ground and caused damage to the site, which led to power outages in at least 15 villages. Turkey was following Russia’s shelling pattern that targets Ukrainian infrastructure on which people’s lives depend. ”

For additional details about the attack on the power station, STJ reached out to Shireen Farho (46), who is a resident of the al-Malikiyah/Derik city. She narrated:

“Hadiyeh Abdullah, Essam Abdullah—a reporter for the Hawar News Agency (ANHA), and I headed to the targeted location in Takel Bakel village. We boarded Hussein Khalto’s car. On the way there, we ran into a U.S. patrol moving in the same direction. We heard that people were injured and that blood donations might be needed. We also saw a group of civilians, mainly fathers, mothers, and old people, who wanted to go there to check on family members. The aircraft were audible. The interpreter accompanying the U.S. patrol got off the vehicle to talk to us. However, a few minutes later, he received a call on his tablet. He was alarmed and told us that a Turkish aircraft was about to hit us. In Kurdish, he asked us to disperse immediately. Before the attack, we saw a flash of light emanating from the aircraft’s direction. I am unsure if it was signaling the U.S. patrol to leave. Only a few seconds later, the aircraft hit near where we gathered. Once the U.S. patrol left, a series of airstrikes followed. The shelling hit a car that carried civilians. The car belonged to a shepherd, Abu Jwayel, who went to the area to check on his son. The son worked as a guard there. The aircraft hit the car nearly 100 meters away from the station. The attack killed all the civilians in the car and two near it while it injured a third severely.”

“The attacks were targeted. The warplanes used missiles that caused great destruction. I miraculously escaped the bombing with a few civilians. We dispersed into the surrounding area. I then took refuge with a family from the neighboring village of Beroj/Karachok. I spent the night at their place.”

Farho provided STJ with a photo, saying it was of the rear part of the vehicle the Turkish aircraft targeted. The image shows a pickup truck with its cargo bed full of charred bodies and its frame full of holes, resembling the marks left by shelling from a close range.

In a video of the same truck, the fire could be seen devouring dead bodies in the cargo bed and raging in the cab, with body parts and a severely injured dead body scattered around it.

You may read and download the full version of this report in PDF format by clicking here. (22 pages).

Syria: Visual Analysis of the Bloody Attack on...

Arbitrary Detention and Torture are a Systemic Oppression...