The Autonomous Administration must take effective measures to end violence against journalists, protect the right to freedom of assembly, and guarantee that perpetrators are held accountable 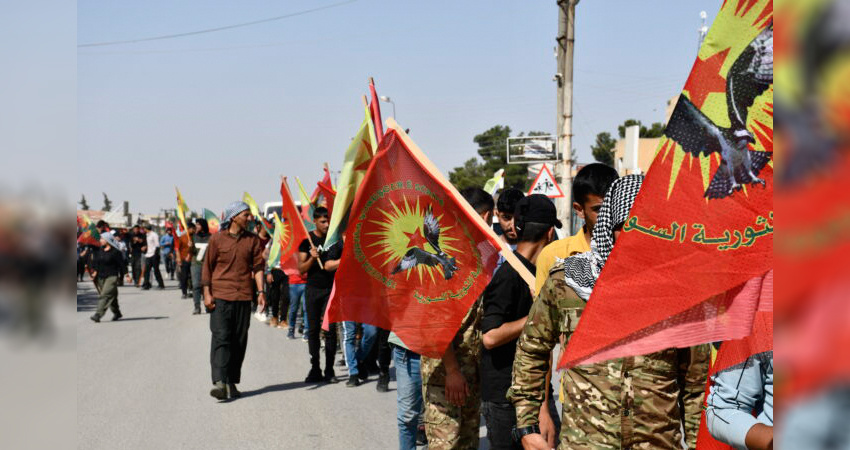 Members of the Revolutionary Youth (RY) during a march in Northeastern Syria.

On 28 September 2022, members of the Revolutionary Youth (RY) attacked a journalist and a group of protestors during a sit- in in Qamishli/Qamishlo city.

The RY is licensed by the Autonomous Administration and is locally known as Taveras Ciwanên Şoreşger. The RY was established in 2011 and despite the founders’ efforts to promote the group as an independent entity, it has been administratively affiliated with the Democratic Union Party (PYD).

On the day of the attack, the affiliates of the Kurdish National Council (KNC) took to the street to condemn the closures the Autonomous Administration enforced against several centers, institutes, and private schools that continued to teach the Syrian government (SG) curricula despite the administration’s clear bans.

In June 2017, the Autonomous Administration issued a circular banning teaching the SG curriculum to students at private teaching centers, or through one-to-one private lessons at students’ or teachers’ homes. The circular said: “Based on the decision of the Committee of Education in the Jazira Region, all private education centers will be shut down, and paid home-taught lessons will be banned. All teachers and owners of such centers are to take heed of the decision and oversee its application, recognizing that offenders will be brought before the public prosecutor.”

Ahead of the protest, the Asayish (Internal Security) forces and the Rescue Forces (Hewarî) of the Autonomous Administration encircled the venue of the protest and blocked major roads leading to the assembly location to prevent journalists and media outlets from covering the event.

The RY carried out the attacks just before the sit-in ended and helped the Asayish (Internal Security) forces disperse the protest using force.

While the RY attacks constitute a blatant violation of the Autonomous Administration’s media laws, this is not the first time a journalist is brutally attacked in northeastern Syria. In an extensive report dedicated to the issue, STJ documented at least 18 infringements of media freedom up to August 2022 in the areas controlled by the administration.

To investigate the recent unrest, field researchers with Syrians for Truth and Justice (STJ) reached out to six eyewitnesses who were present during the protests and the ensuing violence, including four journalists and two civilians.

The Asayish prevented journalists and media outlets from covering the protest without presenting them with a valid justification. The measure is at odds with the 2021 Media Law No. 3 of the Autonomous Administration.

In its introduction, the law provides that its provisions are in place “to consolidate the values of freedom of opinion and expression, grant journalists more freedom of work, without preventing them from obtaining, publishing or transmitting information.”

Additionally, in Article 10 (7) the law states that: “It is prohibited for any party to impose restrictions that hinder the freedom of information flow.”

However, in practice, the media law remains ineffective, based on several first-hand accounts STJ obtained from journalists who intended to cover the protest but were prevented.

On the condition of his anonymity, a journalist from a local media outlet narrated:

“We reached the protest venue a few minutes before it started. The Asayish forces told us that filming was banned. They also informed the incoming people that assembly was prohibited. Ten minutes later, once the sit-in began, the Asayish asked the protestors to leave and end the sit-in. However, the people refused to obey their orders.”

He added that the Asayish forces also prevented journalists from covering the event, which is warranted by the local media laws. He recounted:

“A group of the RY members attacked our colleague Ivan Haseeb right before our eyes. Tow Asayish fighters tried to prevent the attack but failed. Then, another Asayish fighter started shooting above the attacker’s heads to force them away from him, while colleagues pulled him from amongst them. Ivan filed a complaint, in response to which an Asayish official said that they can do nothing about the RY.”

STJ interviewed three other journalists, who provided similar accounts. They stressed that the Asayish prevented them from covering the protests and warned them several times that filming was banned without offering them clear reasons.

For a comment regarding the assaults on protestors, STJ reached out to a young man who participated in the sit-in with his teacher brother. On the condition of his anonymity, he narrated:

“I arrived at the location of the sit-in at 11:15. Several Asayish members had already stopped a few young men in a car from reaching the place. After this, a KNC leader delivered a speech and asked the protestors to leave. However, the protestors refused. They relocated to the opposite side of the street and gathered in front of the UNICEF headquarters because the Asayish were trying to break the assembly. Even though the Asayish forces were extensively stationed in the venue, a distinctive group was attacking the protestors. Several students, 15- to 18- year-old, were collectively beaten. The journalists could not film the incidents because a large number of security members spread there. Additionally, it was difficult to answer phones during the sit-in. We saw a young man being beaten by over 10 security members. We tried to rescue him. Simultaneously, masked members in military uniforms and the RY beat the journalist Ivan Haseeb. Only 10 or 15 meters separated us from him. One security member was exclusively allowed to film the sit-in. He recorded the attacks and the beatings.”

A lawyer from the protest corroborated the young man’s account. On the condition of his anonymity, he narrated:

“The Asayish forces hit several protestors, including students and their parents, both men and women. Additionally, the Asayish confiscated several cell phones and arrested a group of students. They were all subsequently released. Moreover, journalists were banned from filming, and just before the sit-in ended the RY appeared. They attacked the protestors and journalist Ivan Haseeb. The RY attacked him after a plain-clothes individual gave them orders.”

In response to the reported attacks, the Asayish released a statement on their official website. The statement said: “Our forces were deployed to the location of the sit-in to provide protection even though the protestors did not obtain authorization. . . The protestors and a few young people who opposed the sit-in involved in altercations and fights. Our forces broke up some of the fights immediately and dispersed those involved to prevent the situation from spiraling out of control and to ensure the safety of everyone.”

Additionally, the Asayish refuted the accusations that they tracked down or arrested protestors.

A few hours after the attacks, Reporters Without Borders (RSF) posted a tweet, condemning the assault on Journalist Ivan Haseeb. The RSF reported that “[Haseeb] was assaulted by at least 10 RY members, under the police watch.”

The RSF held the Autonomous Administration responsible for any harm that might befall Haseeb and demanded that the administration protect him from the threats he is receiving.

In a similar tone, the Syrian Kurdish Journalists Network renounced the attacks on Journalist Ivan Haseeb. In a statement, the network also demanded that the “concerned bodies within the Autonomous Administration safeguard the right of the media to cover all peaceful events and activities.”

Journalism in the context of International Human Rights Law is a reflection of the collective right to freedom of expression, which was also confirmed by the United Nations Human Rights Committee in the General Comment No. 10.