Northeastern Syria: Membership in the YRA Required to Practice Journalism 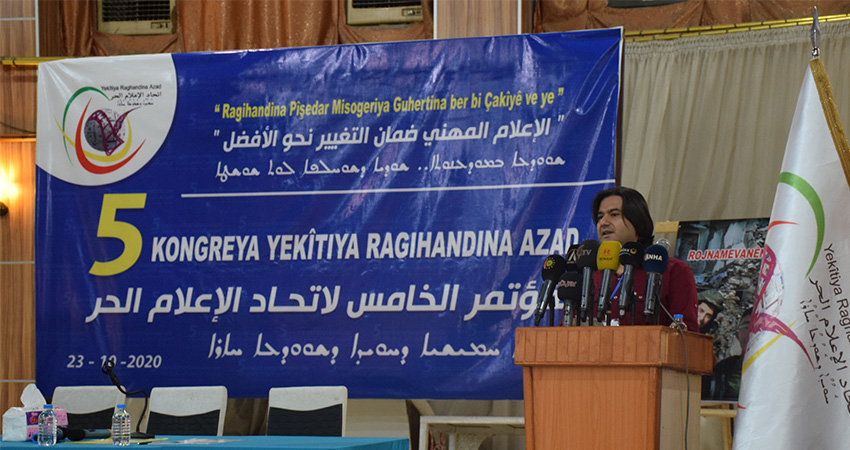 Photo taken from the Fifth Conference of the Union of Free Media in Northeast Syria. Source: ANHA

In mid-March 2022, the Department of Media of the Autonomous Administration of North and East Syria (AANES), also known as Rojava, issued an oral decision forcing those who wish to practice journalism in the area, to join the Union of Free Media/Yekîtiya Ragihandina Azad (YRA).

Officials in the AANES Department of Media responded to those who criticized the decision by saying that it implements regulations of the New Media Law No. 3 of 2021, approved by the General Council of the AANES on 18 May 2021.

Syrians for Truth and Justice (STJ), however; read the AANES’ new media law No. 3 and did not find any provision requiring journalists to belong to a professional association to be allowed to operate in Rojava.

The Union of Free Media/Yekîtiya Ragihandina Azad (YRA) was established in 2012, in an area that were freshly taken from the government by the People’s Protection Units (YPG). The Union identifies itself as an independent professional trade institution that works to preserve the moral and material rights of media professionals and to consolidate freedom of opinion and expression. The Union emphasizes that it operates according to the current laws in northeastern Syria and in line with freedom, justice, and gender equality principles.

Nevertheless, several journalists and activists confirmed to STJ that the Union cannot be independent, since it is financially supported by the ruling powers in Rojava, who thus interfere in its decisions.

What is the “Press Mission Card”?

The Department of Media of the AANES requests media outlets owners and workers, who want to operate in Rojava to submit for a renewable one-year license and obtain a professional identification card, named the “Press Mission Card”.

However, the new decision made joining the YRA a pre-request to obtain the “Press Mission Card”, which constitutes a violation of the Media Law in force in northeastern Syria.

STJ learned that the Department of Media renewed licenses of some media outlets in Rojava whose owners have not yet joined the YRA. However, owners of these outlets were given “Press Mission Card” valid for only one or two months, during which they must complete their YRA joining procedures or their licenses would be revoked.

Nonetheless, a media outlet producer– who asked for anonymity – in Rojava confirmed to STJ that the Department of Media renewed the license for his international Arabic media outlet but did not gave it to him nor gave him the “Press Mission Card” because he is not a member in the YRA. The producer filed an objection but did not receive any response as of 25 March 2022.

A Requirement Outside the Media Law

A media worker in northeastern Syria confirmed to STJ that the adopted media law in Rojava does not require media professionals to join the YRA and he went on to say:

“In our region, there is another media body, which is the Syrian Kurdish Journalists Network, which media professionals can join. However, joining this media body or another is a matter of personal choice.”

The same media worker added that the Media Law does not require media workers to join any professional organization or association to exercise the profession. The new decision may be aimed at identifying the journalists and ensuring their eligibility to practice journalism.

“Most of the media workers operating in the region are well known and have media material archives. They do not need to be members in the YRA to prove their entitlement,” said the media worker.

The new decision conflicts with the provisions of the New Media Law which protects the rights of media professionals and expanding the margin of the freedom of the press in the region.

STJ tried to obtain a statement from the Syrian Kurdish Journalists Network on the Department of Media’s decision. However, officials at the Network refused to comment on the decision with the excuse that they did not read its implementing rules.

The Syrian Kurdish Journalists Network is an independent media body that includes Syrian media professionals who believe in the preservation of Kurdish identity, and work to improve the situation of the media. According to officials, it is licensed by the Autonomous Administration as a union of journalists in northeastern Syria.

No Legal Justification for the Requirement of Joining the YRA

According to officials in the Department of Media and journalists who operate in northeastern Syria, media workers’ joining the YRA helps the AANES to protect their rights. Nevertheless, in the media law adopted in Rojava, there are no provisions that say media workers should join any media body. The AANES’ media law deals equally with all unions, which are defined in it as institutions and professional frameworks that work to protect the civil and moral rights of media professionals and journalists in the region (paragraph 7/1).

What Does International Law Say?

The regulatory action in the field of journalism must aim at protecting and promoting freedom of expression, as well as enabling workers in this field as well as the public at large to seek, receive and impart information and ideas.

For this aim, it is important for the journalism field’s regulatory mechanism to be clear, transparent, unbiased, and fully in line with the international human rights law.[1] To reach this goal, we suggest establishing a licensing authority responsible for looking into the files of media workers and the content of their publications. However, this authority must be fully independent and not in any way a means to monopolize media by the ruling powers. This was also confirmed by the United Nations Human Rights Committee in its concluding observations on the periodic reports of many countries such as Guyana, Russia, Italy and others.

In light of the above, authorities’ requirement of media workers to join a certain official or private media entity is considered a monopoly over a media area and thus a violation of the right to freedom of expression of media workers and the public. Authorities do not have the right to monopolize the media, and they are obliged to prevent and hold accountable any parties who attempt to do so.[2]

Authorities cannot invoke law provisions or procedural rules as a justification for their policies, since these provisions and rules themselves violate the laws guaranteeing everyone’s enjoyment of the right to freedom of expression. The 1985 Advisory Opinion of the Inter-American Court of Human Rights is an international jurisprudence reference to the conditions of the journalists’ compulsory membership in a professional association to exercise the profession. The Court believes that the compulsory licensing of journalists is a blatant violation of the right to freedom of expression.