Northeastern Syria: Attacks Between Turkey and SDF Lead to Death, Injury, and Displacement

Military escalations in early February 2022 result in the deaths of at least two children, the destruction of homes, and the displacement of locals 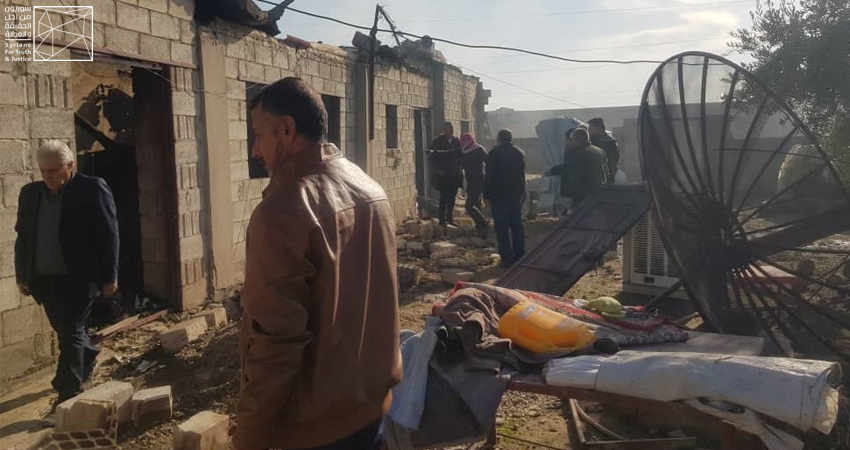 In early February 2022, the area of the triple frontier in al-Hasakah province northeast Syria witnessed an escalation of military confrontation between the Turkish Army and the Syrian Democratic Forces (SDF). That escalation started after Turkish airstrikes struck an SDF training camp, located near a power plant in Taql Baql village of the Al-Malikiyah/ Derek district, on 01 February. The Turkish attack killed several SDF fighters and damaged the power plant, which led to power outages in dozens of villages.

This attack coincided with similar Turkish attacks on Iraq’s Sinjar/Shingal and Makhmur towns. The Security Media Cell of the Iraqi Prime Minister strongly condemned the attacks and demanded the Turkish side to commit to the principle of good-neighborliness in accordance with international conventions.

On 02 February, SDF forces fired machine-guns on a Turkish border guard post on the opposite side of Ayn Dewar village in response to the Turkish attack. This was met by indiscriminate Turkish artillery strikes on the village, resulting in the destruction of some homes and the displacement of some of the village’s locals.

Turkey and the SDF’s reciprocal attacks violate the basic principles of international humanitarian law as well as the laws of armed conflict. This is evidenced by the SDF’s targeting of a point adjacent to civilian objects, which could be considered as using civilians as human shields, and by Turkey’s failure to observe the principles of proportionality and distinction by carrying out indiscriminate attacks, which is prohibited by the laws of war and can amount to a war crime.

Details of the Attacks

STJ’s field researcher confirmed that on 1 February 2022 a Turkish drone struck a military camp of the SDF, close to a power plant located between Beroj/Qere Çox and Taql Baql villages in Al-Malikiyah/Derek, killing four SDF fighters and wounding five civilians.

The SDF responded the next day by targeting a Turkish guard post opposite to the bordering village of Ayn Dewar. A local of Ayn Dewar testified to STJ:

“A military vehicle of the Autonomous Administration forces arrived in Ayn Dewar village, opened fire on a Turkish guard post at the border strip and then left. Following that, the Turkish Army bombarded the village indiscriminately with artillery shells hitting three houses. This led to the displacement of the village locals towards Al-Malikiyah/Derek.”

Another witness told STJ: “The Turkish bombardment resulted in the injury of a man and the burning of three houses in the village.”

STJ’s field researcher confirmed that also on 3 February 2022 a Turkish drone bombed a car carrying employees of the Autonomous Administration on the road between Amuda and Ad Darbasiyah towns near the village of Kherza Foqani. As a result, four people were wounded, including a woman who is in critical condition in the Shahid Khabat Hospital in Qamishli, where she was transferred with the other wounded.

Later, on 9 February 2022, Turkish forces shelled a car carrying civilians near Bahira al-Ghamr village. The strike resulted in the death of an 11-year-old child, Muhammed Ali Kallah, and the injury of a 13-year-old child, Maher Issa, along with two adults, Alaa Jadoua, 25, and Omar al-Ghanim, 45. The car was shelled while passing near the Tall Habash power plant. The power plant was also damaged, leading to power outages in 40 villages in rural Amuda town.