Continued Fires have devoured half a million dunums of farmland in al Jazira Region only so far since May 20, 2019

A side of the fires erupted at the wheat crops of southern rural Idlib in late May 2019.

Syrians’ vital wheat crops still burning in different provinces. The largest blaze was in the Autonomous Administration areas in al Jazira region, which considers the breadbasket of Syria. Flames caused considerable material and financial losses, that might impact the prices and availability of bread in the future. In the northern province of Idlib, fires directly threaten food security, given the small area of wheat fields and the ongoing military operations in the province.

Authorities controlling the region have thus far unable to determine the real causes of fires or to suppress them. However, reportedly, bombardments have blazed some areas while the Islamic State (ISIL) asserted responsibility for a series of farmland arsons.

STJ field researchers in the provinces of al-Hasakah, Raqqa, Aleppo, Idlib, Hama and As Swaidaa monitored and documented the incidents of fires started from late May 2019 until June 14, 2019, and conducted interviews with agricultural engineer, economist and local sources to assess the actual extent of losses.

1. Arsons investigated, not proven yet:

a. Fires in the Autonomous Administration enclave

The joint head of the Economic and Agricultural Authority in North and East Syria, Suliman Baroudu, said to STJ field researcher in al-Hasakah that about 450.000 dunums of wheat fields were totally fried between May 20 and June 14, 2019 in the Autonomous Administration controlled areas in the provinces of Raqqa, al-Hasakah, Deir ez-Zor and Ayn al-Arab (Kobanî).[1]

Baroudu reported the burn of a farmer tried to extinguish his field and said that fires caused financial losses of 18 billion Syrian bounds as well as the damage of three agricultural equipment.[2]

In one incident, farmers confirmed seeing a man driving a Suzuki and another on a motorcycle, setting fire to wheat fields in southern Qamishli and along the Qamishli-Tell Tamer highway; the Autonomous Administration detained 12 suspects.

A side of the fires of June 1, 2019 in eastern rural Al-Qahtaniyah (Tirbespiyê). Photo credit: STJ.

Mustafa al-Abed, the director of the Raqqa Civic Council information office, said to STJ that approximately 15% of Raqqa’s wheat farmlands went up in flames. He said that fires were likely to be arsons, since all the fields burned are in the Autonomous Administration enclave, while those in the government- held areas never touched.

b. Fires in government-held areas

The local activist Salam Azzam, alias, from As Swaidaa, told STJ that about 15.000 dunums of wheat fields in the Lajat area, specifically in the villages of Dibbeen, Jareen, Dama and al-Areeqa, were all burned in late May 2019. Furthermore, 13 plots of land, of different areas, planted with wheat and other crops, were also fired in the province of As Swaidaa. STJ researcher in As Swaidaa quoted farmers and landowners saying that the fires were arsons, citing the suspicious way they were erupted in dispersed areas. However, the actual causes of the fires are still unknown.

ISIL claimed credit for the crop fires in al-Hasakah and other provinces, through a statement published in its official weekly newsletter, al-Naba. 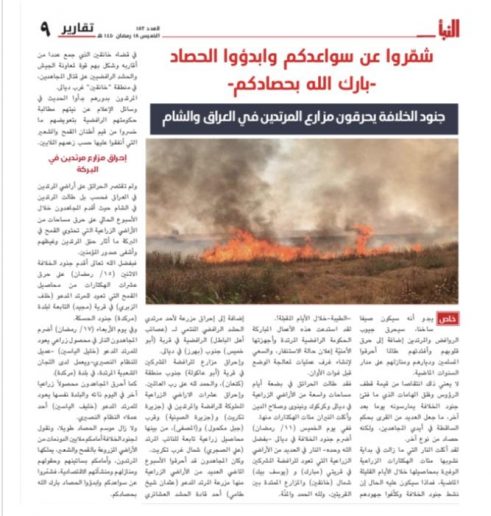 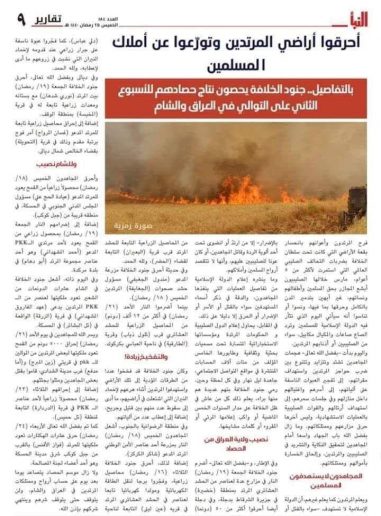 Statements published by IS’ al-Naba newsletter, which claim the group’s responsibility for several crop fires.

2. Fires caused by bombardments and others by saboteurs

Several agricultural lands in the provinces of Aleppo, Idlib and Hama were set ablaze by indiscriminate bombing of the Syrian forces and allies, or deliberately by pro-regime agents, who engulfed many fields into flame.

a. Fires started by Government militiamen

Abu Ali, a civilian resident of the regime-held al-Hamra district said to STJ:

“National Defense militiamen set fire to fields of farmers who refused to pay them the high amounts imposed on the entry of their harvesters from Abu al-Duhur crossing.”

A civilian from the village of al-Mahsar, who asked not to be identified, said that Sama’an, who is the mayor of the village of Kharsan and the highest authority in al-Hamra district, is the one who started fires in most of the farmlands in the villages of Doma, al-Hazim, Arafa, Ribda and Qaser Ali after harvesting his crop.

Head of Uqayribat Subdistrict local council quoted community sources saying that the cause behind the crop fires was a dispute between two National Defense groups; the first leaded by Fadel W. and the second by Ghazwan S., over sharing the fines, taxes and royalties which would be paid by farmers.

For his part, the agricultural engineer Tariq al-Ali estimated that 82 dunums of wheat, barley, cumin and lentils fields along with one thousand olive trees, went up in flames in the villages of Uqayribat, Hanuteh, Neimiyeh, Jub al-Rumman and al-Khadeera. Al-Ali added that, to date, financial losses amounted to about 75 million Syrian bounds.

Villages in southern Idlib, re-took by the Syrian Government in late 2017, witnessed a huge blaze which broke out on May 29, 2019 from the village of al-Shateeb and extended to the villages of al-Hawya, Ar Ruwaidhah, al-Muraijib al-Wabeda and al-Maksar al-Janoubi. In the same area another fire started from Tell Amara village and spread to the villages of Nbaz and al-Maksar al-Shamali. An estimated to about 240.000 dunums of farmland, planted with barley, lentils and other crops, plus 3500 olive trees, were burned, according to a farmer from the village of al-Maksar.

Regarding the cause of the fires, a local activist residing in the village of al-Maksar confirmed seeing soldiers riding motorbikes setting fire to crops in the villages of al-Shateeb and Hawwa, in plain sight, and people suggested the reason to be the farmers’ refusal to pay bribes and royalties imposed on them by the Air Force Intelligence and Civil Defense checkpoints’ agents in exchange for allowing them harvest their crops.

b. Fires resulting from indiscriminate bombardment

At least 10 dunums of wheat fields in the towns of Al-Tamanah and Khan Shaykhun were burned in 29 and 30 May 2019. According to a local military observatory, the source of bombardments was the barracks of the Russian forces and affiliated 5th Corps in the villages of Braideej, al-Kabariah and Habibat.

Mustafa A’koun reported the burn of hundred acres of wheat, barley and olive fields in the city of al-Bab, eastern Aleppo, by indiscriminate bombardments on 1 and 2 June 2019. Those fields are 6km away from the military front from the Bza’a side and 4km deep in the town.

3. The fires’ impact on food security

The expert and economist Soqrat al-Alo told STJ through an interview that fires, though widespread, will not have immediate effect on the Syrian food security or endanger it, but it might impact the prices and availability of bread in the future, which would create a new economic crises.

Al-Alo mentioned that economists expected the wheat production to double in 2019 and reach 2.7 million tons, due to the heavy rainy season, which means that fires will not cause food crisis in the country. Further, the Syrian government has already signed a contract to buy volumes of wheat from Russia.

Al-Alo added that Syria hasn’t achieved self-sufficient in wheat in like ten years, as its annual output of wheat was only 1.7 million tons, while it needs 2.3 million tons to be sufficient.

However, the case is not the same in the province of Idlib, whose food security is seriously threatened by fires, as the agricultural engineer Yehia Tannari confirmed to STJ saying that almost 50% of the wheat fields, which constitute only 20% of the cropland in Idlib, devoured by fires, and that endanger the food security in the Idlib, which used to buy, or get as assistance, 80% of its annual wheat needs.[3]

[3] Idlib is controlled by Hay’at Tahrir al-Sham (HTS) and other armed opposition groups.

Despite the challenges, the fight against COVID-19 in Syria must leave no one behind - Syrians for Truth and Justice April 2, 2020 - 3:41 pm