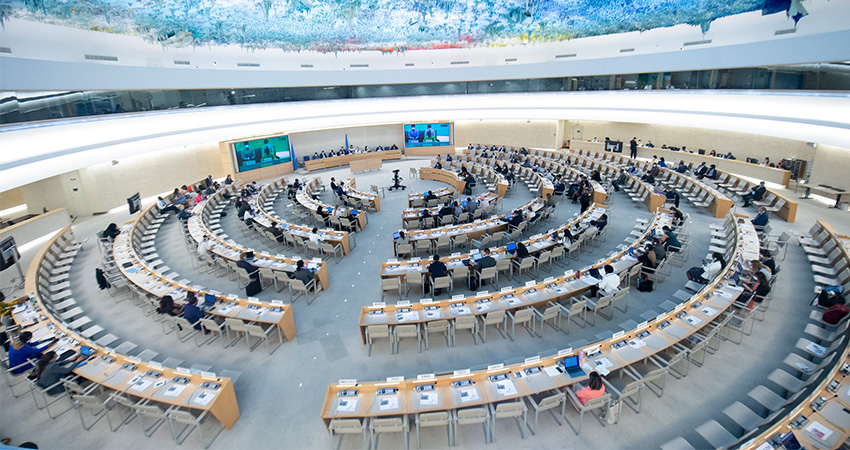 A photo of the 50th Regular Session of the Human Rights Council. Photo Source: Violaine Martin.

On 29 June 2022, Syrians for Truth and Justice (STJ) joined 8 other international organizations in presenting an intervention to the UN Human Rights Council during the oral update of the Independent International Commission of Inquiry concerning the issue of the forced return and deportations of Syrian refugees globally.

You can watch our statement through this link.

Nearly half of Syria’s population has been displaced over the course of a devastating twelve-year conflict. There are currently 6.8 million Syrian refugees and another 6.7 million are internally displaced.

Reports from human rights organizations indicate that no part of Syria meets the requirements for safe, dignified, and voluntary return. Syrians who returned have been subjected to torture and other ill-treatment, arbitrary detention, enforced disappearance, extrajudicial killings, sexual and gender-based violence, and persecution at the hands of the Syrian government and armed groups.

In Denmark, hundreds of Syrians are at risk of being stripped of their residency status.

The Turkish plan to repatriate one million Syrian refugees threatens to alter the demography of the area. Turkish-backed opposition factions have seized the property of Syrian Kurdish families, who have been denied the right to return.

Our organizations call on this Commission to publish a comprehensive report on the human rights situation of displaced Syrians, including refugees, asylum seekers, visa holders, and other Syrians who were returned or deported.

We further urge UN member states to abide by the principle of non-refoulement and to immediately end all policies and practices that remove refugee status or deprive displaced Syrians of temporary protection status.

NGOs in Syria Call for Immediate Action From...

Joint letter, on the International Day in Support...