The UN Security Council and the European Union must take a firm stance towards the implicit and coercive demographic engineering efforts across Syria. Additionally, they must ensure that humanitarian aid, reconstruction, and early recovery efforts do not turn these demographic changes into the status quo 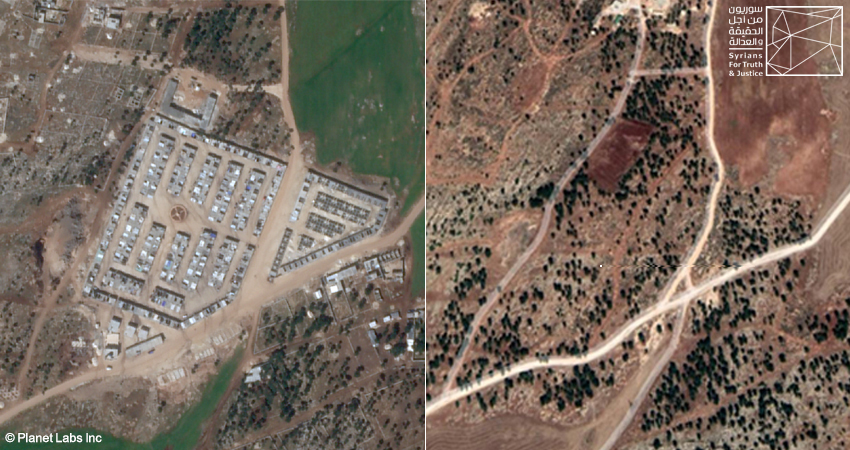 Satellite images which show the Kuwait Al-Rahma village, which was built as part of the "residential community" that was built at the foot of Jabal al-Ahlam.

Several factions within the opposition’s Syrian National Army (SNA) have been building one of the largest human settlements in Afrin region. The settlement is warranted by the Turkish authorities and is designated for housing SNA fighters and their families in Afrin, which has historically identified as a Syrian Kurdish-majority region.

This settlement— al-Tajamu’ al-Sakani (housing village)—was built on a large area in the region locally known as Jabal al-Ahlam (Mountain of Dreams). This mountainous area is part of the Jabal al-Akrad/Çiyayê Kurmênc (Mountain of the Kurds) and is referred to in Turkish as Kurd Dagh. The area is famous for its key strategic location, which overlooks the Afrin city center and demarcates the territories held by Turkey on the one hand, and those controlled by the People’s Protection Units (YPJ), the Syrian government (SG) forces, and Russian forces, which operate several military bases, on the other.

For the purposes of this report, Syrians for Truth and Justice (STJ) spent months collecting testimonies. Sources and witnesses reported that Rahmi Doğan, governor of the Turkish state of Hatay, is one of the officials responsible for the construction of the housing village. They added that Doğan granted several local and international relief organizations, as well as the Afrin City Local Council (ACLC), the green light to commence with the project’s construction over the mountain’s foothills and provide the village with services. The building permit was forwarded after several armed opposition groups, notably the Levant Front/al-Jabha al-Shamiya, pitched the project proposal to Turkish authorities.

The role of some organizations supporting these settlements has sometimes gone beyond simply providing “public services” to the families of fighters. In some cases, organizations have built entire villages, giving the appearance of public services serving civilians when in fact the projects are primarily intended to house fighters and their families. One example of this is the village of “Kuwait al-Rahma”, which was built with the support of the Rahma International Society and donors from Kuwait, according to the al-Sham Humanitarian Foundation, which implemented the settlement project.

The Kuwaiti newspaper Al-Watan revealed, in a report published 02 September 2021, that the Kuwait al-Rahma village is only one of other villages which will be built on the Turkish-Syrian border.

Furthermore, STJ learned that the ACLC, founded by the Turkish government after they militarily occupied the region in 2018, is issuing Waraqat Takhssiss (an allocation paper), which purportedly functions as a title deed for the buildings but not the plots of land on which they are constructed. The issuance of the document is also authorized by governor Doğan.

STJ obtained information verifying that nine SNA-affiliated factions, notably the Levant Front/al-Jabha al-Shamiya, are deeply involved in the construction project. The Front is controlled by commander Muhanad al-Khalaf, known as Ahmad Nour. While these factions run the project, their sharia officials (men of religion) are disseminating information about the project to fighters and encouraging them to register their names for allocations. These officers also critically contributed to the area’s segmentation and, later, the distribution of land plots to fighters and their families.

Moreover, STJ-led investigations into the housing project revealed that several local and international organizations are also involved in funding the project and promoting it as primarily initiated for the benefit of civilians. Against these promotional claims, the sources STJ met stressed that the SNA-affiliated fighters and their families, hailing from areas in Rif Dimashq (Damascus countryside), Homs, and Hama, were the key beneficiaries of the project, while only 25% of the beneficiaries are civilians. The Turkish Humanitarian Relief Foundation (IHH) is among the key organizations financing the project. The IHH provided each beneficiary with construction materials worth approximately 1,000 USD.

Importantly, Jabal al-Akrad (also known as Aleppo Mountain), which is the project’s construction site, extends over 2% of Syria’s entire area. Its terrain is covered in bushes, constituting the largest vegetation cover in Aleppo province. For the purposes of the project, large swathes of the area’s vegetation have been eradicated and replaced by concrete buildings.

The documentation process and evidence collected by “Syrians for Truth and Justice” for this report highlights several violations committed in northwest Syria for which Turkey, as the occupying power, bears responsibility under Article 47 of the Fourth Geneva Convention. For example, the selectivity of the allocation papers, which prioritize the needs of Syrian Army factions over the needs of civilians constitutes a discriminatory dispersal of aid which obstructs civilians from meeting their basic needs (a violation of Article 60 of the Fourth Geneva Convention).

It is helpful here to look to the case of Palestine, where the International Court of Justice in 2004 found that the border wall which Israel built risked “further alterations to the demographic composition of the Occupied Palestinian Territory resulting from the construction of the wall inasmuch as it is contributing… to the departure of Palestinian populations from certain areas” (para. 122). So, although Israeli authorities did not state outright that demographic change was the goal of the barrier wall, given the wider pattern of Israeli actions, its construction nevertheless had the effect of implicating Israel in this crime against humanity. Given the pattern of violations that STJ and other organizations have documented in Turkish-controlled and predominantly Kurdish areas of Northwest Syria, these settlements could be established to be part of this systematic process of altering the demographic composition of Afrin.

The fact that Turkish-backed forces, who have seized and rented the properties of civilians who were displaced or fled their home during Operation Olive Branch, continue to control Afrin and its surrounding areas makes it difficult for those civilians to return home. Moreover, despite allegations that the settlements are built by lands owned by the state, it is important to note that Syrian penal laws have described trespassing on public property as a crime punishable by law. Article 724 of the General Penal Code No.148 of 1949 notes that a penalty of up to six months’ imprisonment will be imposed on anyone who usurps a portion of attached or unattached public property.

In any case, as the Syria Justice and Accountability Centre (SJAC) noted last year with regard to settlements elsewhere in Afrin, such as the Kuwait al-Rahma settlement, that it is incumbent on private donors and aid organizations, as well as the governments of their home states, to ensure that their aid is distributed equitably and in a way that does not violate rights to property and return of displaced civilian populations. Most fundamentally, however, the Turkish government as the occupying power exercising effective control in Afrin and other parts of Northwest Syria is immediately responsible for the violations and issues that the settlements have entailed so far.

This report is one in a series that STJ started in 2021. With this series, STJ seeks to document and collect evidence about the illegal housing villages and settlements built in Afrin region after the Turkish army seized the area in the aftermath of Operation Olive Branch in 2018, launched with direct participation from SNA factions.

The report builds on information obtained over three stages. First, field researchers with STJ carried out visits to the target area in July 2021. The researchers examined the construction site of the project and took several photos and videos. During the visit, the project was still in its early phase.

Second, a different set of STJ’s field researchers continued the information collection process about the seizures of homes and the construction of new ones. These researchers carried out interviews with 24 sources. All the sources are informed of the details of the residential project in Jabal al-Ahlam. The interviewees include eyewitnesses, local relief workers, and project staffers, who requested that their identities remain anonymous for security reasons and for fear of retaliation. Additionally, the researchers interviewed several beneficiaries and individuals within the SNA.

After the researchers verified the collected information and details provided by the sources, they obtained an additional set of information from open sources addressing the report’s subject matter, and exclusive satellite images of the area where the project is constructed. The satellite footage is used to identify the exact areas dedicated for construction.

The Council of Afrin is headed by “Mohammed Saeed Suleiman“, an engineer who also works as the following: Minister of Local Administration and Services in the Interim Government (affiliated with the Syrian opposition coalition), also a member of the Presidency of the Council of Syrian Clans and Tribes, Secretary of the Civil Peace Council, and Chairman of the Organization Judy Education. He was born in Aleppo in 1966. Meanwhile, “Mohammed Sheikh Rashid” is the deputy of the local council of Afrin.

[…] for Truth and Justice (STJ), a human rights organization, published an extensive investigative report in which it revealed details of the demographic change process implemented in Afrin and its […]