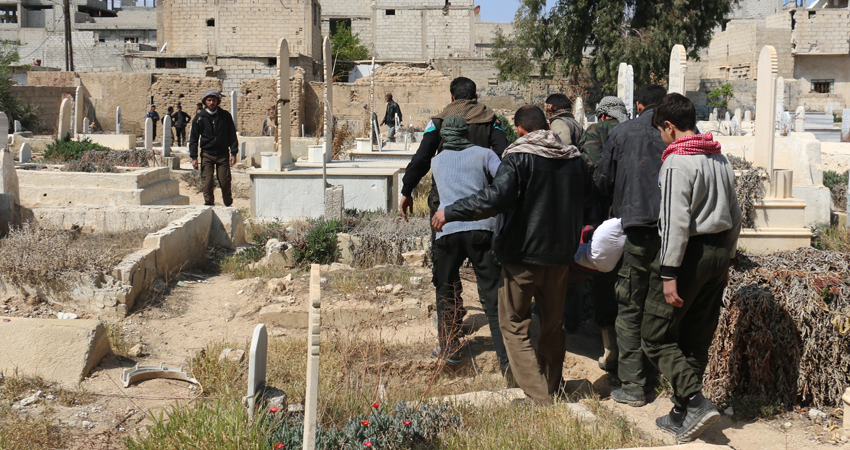 On 19 February 2022, the General Security Directorate (State Security Service) handed the Mayor ‘Mukhtar’ of Deir al-Asafir[1] village a list of 46 names of detainees who died inside its prisons. The detainees were arrested from the village after the government retook Eastern Ghouta with Russian support.

The Damascus Countryside Reporters Network (DCRN) inquired about the 46 detainees through its sources inside Deir al-Asafir and identified 31 of them. On 21 February 2022, the DCRN published a brief report in which it cited the names of the 31 detainees, revealing that five of them are of Palestinian origin and that they all were held and executed in Sednaya Military Prison.

The Association of Detainees and the Missing in Sednaya Prison (ADMSP), however, confirmed that families of some of the detainees listed by the DCRN had known about their sons’ deaths two years previously.

STJ spoke to the director of the DCRN, Abd al-Rahman Tafour, on 8 March 2022, and he explained:

“It turned out that some of the detainees were held in Sednaya prison, and the others in security services branches. The mayor of Deir al-Asafir asked families of the detainees to go to the civil registry to obtain death certificates for them; some of them did.”

STJ will continue its investigations into the deaths of the detainees and attempt to obtain the death certificates families may have received and publish them in a new report, along with any additional developments.

‘Reconciliation’ Did Not Prevent Their Arrest

On 24 February 2022, STJ contacted a local of Al Mleha, who confirmed that many of the detainees named on the list provided by the security services were arrested despite signing settlement/reconciliation agreements with the government. The local explained:

“The names cited in the DCRN’s list are of people arrested in 2018, after the government took control of all towns and villages of Eastern Ghouta, including Deir al-Asafir. Those people chose to stay in their hometowns and reconcile with the government but the Syrian security forces still arrested them and others. Families of the detainees went repeatedly to security services’ branches to inquire about the whereabouts of their loved ones, who were supposed to be protected from arrest after reconciling with the government. The families appealed to the mayor of Deir al-Asafir, Ahmed al-Hasan, to use his influence and help them learn the fate of their loved ones held by the security forces, but to no avail. On 19 February, the General Intelligence Directorate summoned the mayor, Ahmed al-Hasan, and handed him a list of dead detainees. The mayor was told to inform families about the deaths of their loved ones so they will register their deaths at the civil registries and obtain death certificates.”

In the same context, STJ found social media obituary posts by families of some of the detainees on the DCRN’s published list. The posts included one by a former correspondent for a TV channel mourning his father and brother.

For his part, Abd al-Rahman Tafour, director of the DCRN, confirmed to STJ that on 21 February 2022, the mayor of Deir al-Asafir, Ahmed al-Hasan, gave families in the village death documents of their detained sons, without disclosing the place of their death or burial. Tafour added that the families did not dare to dispute the death documents, for that day and the days after witnessed multiple arrests of young men in the village.

This is not the first time the Syrian authorities have notified Syrian families of the death of their missing and detained loved ones in its prisons. On 1 February 2021, security services forwarded hundreds of death documents of detainees to civil registries in Homs, Hama, Deir ez-Zor, Damascus, Daraa and al-Qunaitra. Earlier, in early 2019, civil registries in several Syrian provinces received certificates declaring dead hundreds in security services’ detention facilities, with at least 700 arriving in Hama alone.

[1] A village in Damascus countryside, administratively a part of Al Mleha district.