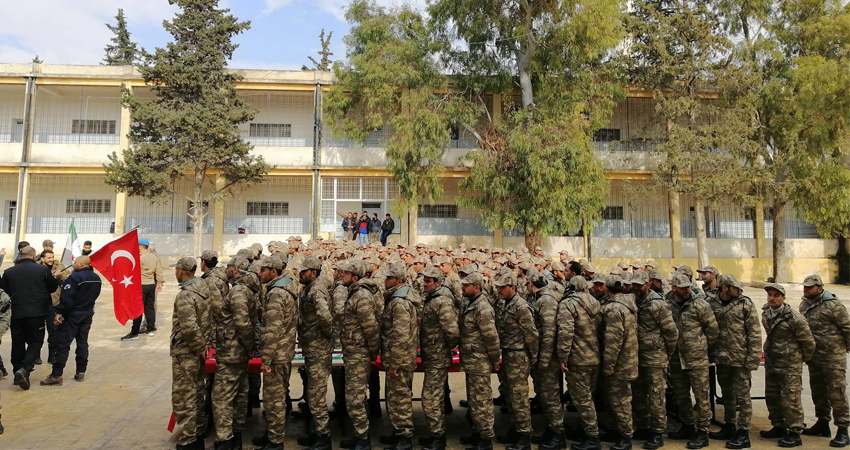 Syrians for Truth and Justice/STJ documented the arrest of no less than 66 persons, including five women, in the Kurdish majority Syrian district of Afrin, as carried out by armed groups of the National Army/NA, which operates under the Syrian Interim Government/ National Coalition for Syrian Revolutionary and Opposition Forces, and its affiliated services. The arrests took place in January 2020, covering a wide range of charges. While 28 persons, including the women arrestees, were released after some of them or their families paid money in fines, amounts varying between 150 and 300 thousand Syrian Pounds per person, the remaining ones were transferred to central prisons and command centers in different districts, doomed to have an unknown fate.

According to testimonies provided by locals and the observations of STJ’s field researchers, the military and civil Police were both responsible for the largest number of these arrests. The rest of the arrests were, however, carried out by other military bodies, including the Political Security Service, Mu’tasim Billah Brigade, Suleiman Shah Brigade/al-A’amshat, Ahrar al-Sharqiya and Sultan Mohammed al-Fateh Brigade.

In the district of Afrin, 17 persons were arrested. While only three were released, the destiny of the 14 others remains unknown yet, knowing that the Civil Police, the Military Police, the Political Security Service and the Mu’tasim Billah Brigade are the ones who embarked on these arrest incidents.

“Muhyee ed-Din was arrested for refusing to hand over the Mu’tasim Billah Brigade relief shares, since the families of the fighters are not entitled to this aid which is supposed to be distributed to civilians in need only. Refusing to give them some of the relief shares, the fighters arrested him and transferred him to one of the brigade’s posts in the village of Qibar, near the city of Afrin.”

Muhyee ed-Din was released on January 26, 2020, after several personalities and local dignitaries played the mediator.

On January 23, 2020, a patrol of the Political Security Service arrested Houroh Othman, one of the Afrin Local Council’s Founders, for unidentified reasons and released him on January 28, 2020.

On January 14, 2020, the Political Security Service had also arrested one of the employees at the Civil Registry Department, affiliated with the local council. The arrestee, by the name Bashar—from the village of Mosakou—is still held captive by the service to the date this report was made.

On January 14, 2020, Abdulrahman Zulfo was arrested from his vegetables shop, located on the Jindires Road. A relative of the detainee told STJ’s field researcher the following:

“Abdulrahman was arrested by the Military Police after militants of the National Army accused him of kidnapping his nephew, who went missing for two days and later on appeared to have been trying to leave Afrin to Turkey to be returned by a checkpoint to his parents. Abdulrahman, for his part, was released on January 22, 2020.”

On January 19, 2020, the Military Police arrested Nouri Fadil al-Ttabel, 18 yrs., from the restaurant where he works in the city of Afrin, accusing him of taking part in the surveillance-related activities that were imposed on the people during the reign of the Autonomous Administration. The young man was transferred to the Maratah Central Prison, where he continues to be detained.

The source stressed that all the detainees have at one point performed the duty of self-defense/compulsory recruitment which was imposed during the control period of the Autonomous Administration, adding that they were all repeatedly arrested and have all paid fines to be released every time.

The detainees were transferred to the Maratah Central Prison, where they are yet held captive awaiting to be put on trial.

One of the family’s acquaintances informed STJ that Aboud has been repeatedly arrested, paying a fine to be released every time.

The Shaykh al-Hadid-based field researchers reported that the district witnessed the arrest of only two people during January, whose fate is yet unknown, adding that the arrests were carried out by the civil and military police in the village of Marwania.

On January 2, a Civil Police patrol arrested Abdullah Mohammad Obaid, 27 yrs., on charges of former cooperation with the Autonomous Administration. No additional information, nonetheless, were reported concerning his fate.

A Military Police patrol has also arrested Jamil Mohammad on January 16 on charges of former cooperation with the Autonomous Administration, while his fate remains unknown.

It is worth mentioning that the two persons were arrested several times before and have repeatedly paid fines for their release, despite having undergone a legalization of status.

In the district of Bulbul, nine young men and a woman were arrested on various charges, and only three young men were released after paying fines, while the fate of the young woman and the other male detainees remains unknown. The arrests were carried out by both the civil and the military police.

In the district of Ma’abatli, 27 persons, three of whom were women, were arrested. Twenty were released, including the women, while the fate of the six men remains unknown. The arrests were carried out by the civil and military police, in addition to Suleiman Shah Brigade/al-A’amshat and Sultan Mohammed al-Fateh Brigade.

An eyewitness based in the village reported the following to STJ’s field researcher:

“While being arrested, a fight broke out between Walat and the fighters of the al-A’amshat armed group. They brutally beat him, which necessitated his transfer to the hospital.”

On January 16, al-A’amshat armed group arrested three other people from the same village, who were transferred to one of the group’s detention facilities in the district of Shaykh al-Hadid. The detainees are Ahmed Mohammad Habash, 35 yrs., Walid Qaziqli, 37 yrs., and Mohammad Waqas on charges of former cooperation with the Autonomous Administration.

It should be noted that the three detainees were arrested several times before by the same armed group and on the same charge. Each time they were released in return for a fine.

The witnesses reported that all the detainees were released in batches, and some of them had to pay money in exchange for their release.

The district of Rajo witnessed the arrest of three persons, all from the same village, whose fate is yet unknown. The arrests were carried out by the military police and the Ahrar al-Sharqiya armed group.

On January 27, Dalu Ahmad Samo was arrested while passing at a checkpoint of Ahrar al-Sharqiya at the Amara Village’s junction. Dalu was transporting firewood and possessed a sum of money upon his arrest. His fate, however, is yet unknown.

Throughout January, the district of Sharran suffered the arrest of four men and a woman by the Military Police and the Political Security Service. Only the woman was released while the fate of the four young men continues to be unknown.

According to one of the villagers, the young Arian is still detained at the Maratah Central Prison. Ms. Amal, for her part, was released after she paid a sum of one and a half million Syrian Pounds and is still being monitored since the court has not yet made a final decision about her case.

The witness affirmed that Arian and Amal were subjected to harassment and threatened with arrest by armed group, adding that they had previously been arrested and paid money in exchange for their release.

The district of Jindires witnessed the arrest of two young men over January 2020 by the military and civil Police, one of whom was released while the fate of the other continues to be unknown.

In Central Jindires District, on January 16, Jamil Mohammad Shaker was arrested by the Military Police on charges of performing the self-defense duty earlier, and his fate is yet unknown. It is important to mention that Mohammad was previously arrested for the same charge and paid 250 thousand Syrian Pounds in exchange for his release.

On January 17, a Civil Police patrol arrested Masoud Rasho, 34 yrs., an Imo Village resident, for unknown reasons. He was then transferred to a prison in the district of Jindires and got released on January 21 after paying a fine.

Second: Who Carried Out the Arrests?

Throughout the second half of 2019, STJ managed to monitor most of the arrests that took place in the Afrin region,[1] which were mainly carried out by the civil and military police while National Army-affiliated armed groups participated in a large part of them. The total of arrests carried out during the reported period amounted to 506 cases— 114 arrests were undertaken by the Military Police, 124 arrests by the Civil Police and 43 other arrests were carried out jointly by the two services and the Turkish intelligence, while all the armed groups have arrested 225 persons.

STJ has recorded a reduction in the arrests carried out by armed groups in January 2020, as only four armed groups took part in the arrests documented over the reported month, being thus responsible for the arrest of 27 persons out of the total 66 arrestees, given that over 23 armed groups have embarked on raids and arrests in addition to the military and the civil police in the second half of 2019.

The Civil Police was founded in May 2018 and is headed by commander Rami Tlass.  The forces of the police attended several trainings and camps in Ankara and Mersin under the supervision of Turkish officers.

The tasks allocated to the Civil Police, as reported on its Facebook official account, are spreading security and safety, combating terrorism and prosecuting the cells of the Kurdistan Workers’ Party and the Islamic State/IS, organizing traffic and protecting the area.

The service was founded in July 2018 and is led by Milad al-Hamoud. Its forces, however, belong to the three legions which consist the oppositionist Syrian National Army. Today, the Military Police is headed by Colonel Mohammad al-Hammadeen, dubbed Abu Riyad.