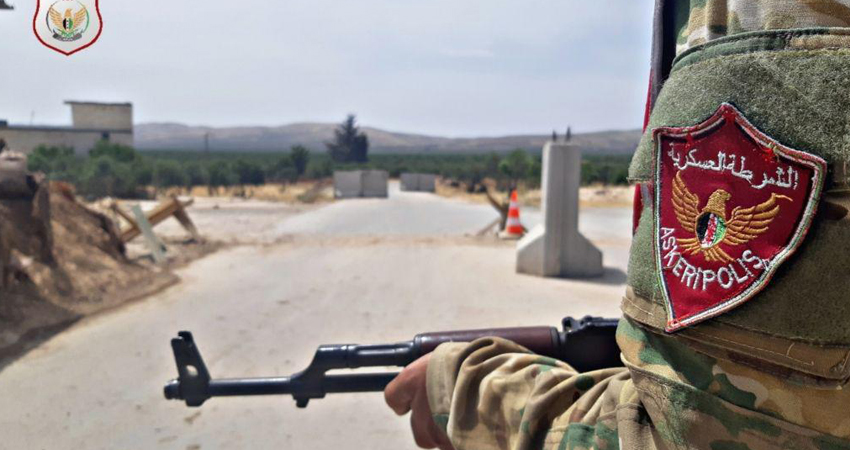 At least 506 arrests, among them 30 women and 8 children under the age of 18, were made for various reasons by Turkish forces and groups affiliated with the National Army in the Kurdish-majority city of Afrin, during the second half of 2019, as documented by STJ researchers.[1] 195 of those arrested were released after they or their relatives paid fines/ransoms, which amounts ranged between SP.150.000 to SP.300.000 per person. However, some were transferred to central prisons or district command centers, while the fate of 311 of them still unknown.

According to information collected by STJ field researchers-distributed over seven districts in Afrin-and accounts of some of those released, procedures for the releases were done in two ways:

Image (1) statistics of the arrests made in the second half of 2019.

Image (2) the distribution of arrests over months.

Image (3) the distribution of arrests in the districts of Afrin.

The following table shows the names of the military groups responsible for the arrests against Afrin’s people and the number of arrests made by each:

STJ has documented the arrest of 66 people, including 6 women, in December 2019. Only 19 of those arrested were released while the fate of the rest still unknown as of the date of this report, January 6, 2020.

According to accounts of locals and observations of STJ field researchers, the detentions were conducted by the Levant Front/al Jabha al- Shamia, the Military Security, the Sham Legion/Failaq al-Sham, the Mu’tasim Division, the 1st Division, the Sultan Murad Division, the Northern Democratic Brigade, the 113th Brigade, Samarkand Brigade, Suleiman Shah Brigade (also known as al-Amshat), the Military Police, the  Civil Police and al Waqqas Brigade; the last three are responsible for the bulk of arrests

STJ field researchers quoted witnesses saying that detentions and arrests were made arbitrarily and did not respect due process. Also, many of those arrested hadn’t been informed of charges against them by written notices or orally, contrary to the statements made by the former spokesman of the National Army that the arrests were carried out within the legal framework.[2]

a. Arrests in Afrin:

Afrin district witnessed the arrest of ten people, including two women and four members of the local council. According to locals and STJ researchers, the arrests were made by the Political Security, the Civil Police and the Levant Front:

“He was previously arrested for performing the self-defense duty, and paid a fine of SP.150.000 for his release. He has been transferred to the central prison of Maratah and brought before the judge and now he is waiting for his release procedures to be completed.”

b. Arrests in Shaykh al-Hadid:

The town of Shaykh al-Hadid witnessed the arrest of 11 people by Al Waqqas Brigade along with the Suleiman Shah Brigade (also known as al-Amshat):

The Bulbul district witnessed the arrest of 13 people, including a woman. The civilian police, the Mu’tasim Division, the Sultan Murad Division, and 1st Division carried out those arrests, which were as follows:

Two villages in the district of Maabatli witnessed the arrest of 14 people for working as guards under the Autonomous Administration. The arrests were made by the Military Police, Northern Democratic Brigade and the Levant Front:

A villager reported that the same three young men had been arrested several times previously on charges of performing the self-defense duty.

Rajo district witnessed the arrest of 10 people, including members of the local council. The arrests were carried out by the Military Police, the Civil Police, and the 113th Brigade:

In the same village, on December 4, Khalil Khalo Abu Rizan was arrested by the Civil Police on charges of working with the Autonomous Administration, and their fate remains unknown until now.

Also, on December 24, Ahmed Fakhry Sheikho, 32, a resident of Haj Khalil village, was arrested at the Civil Police checkpoint at the entrance to Afrin from the Rajo side, on charges of working with the Autonomous Administration and he was transferred to Maratah prison to be brought before the judiciary.

The villages of Maydanki and Dayr Sawwan witnessed five detentions by the Civil Police and the Sham Legion/Failaq al-Sham:

In the same village, on December 5, members of the Civil Police arrested Professor Joan Jabr while on his way to collect his salary, since he is a Turkish teacher at the village school. He was arrested on the pretext of working with the Autonomous Administration, and transferred to the central prison in Maratah and his fate remains unknown.

[1] In its report on August 2, 2018, the Amnesty termed the presence of the Kurdish forces in Afrin an ‘occupation’. For more info: “Syria: Turkey must stop serious violations by allied groups and its own forces in Afrin”, Amnesty, August 2, 2018. (last visit: January 6, 2020). https://www.amnesty.org/en/latest/news/2018/08/syria-turkey-must-stop-serious-violations-by-allied-groups-and-its-own-forces-in-afrin/.