Afrin: A Kuwaiti Funded School Built on the Ruins of the Yazidi Cultural Union

Two satellite images showing the Yazidi Cultural Union before and after its destruction. The first photo (before the destruction) was taken on 06 February 2018, and the second photo was taken on 21 March 2018, just two days after the Turkish forces and armed opposition factions took control of the center of Afrin city and the entire area.

On 29 June 2020, Afrin’s local council, operating under the Syrian Interim Government, announced it was laying the foundation stones for a new school on the ruins of the Yazidi Cultural Union, under the name “Afrin”, which was later changed to “Al-Imam wa Al-Khateeb”. The Yazidi Cultural Union, located in Afrin, was demolished along with the monument of Lalişa Nûranî and a statue of Zoroaster, who are Yazidi symbols. The council stated that the Kuwaiti Sheikh Abdullah Al Nouri Charity Society is funding the new school project and the White Hands Association (Kurdish: Beyaz Eller Derneği) is responsible for its implementation and management.

Before the onset of the Syrian war, the historic building, located in Velat Street, was a headquarters of the Arab Socialist Ba’ath Party. However, in October 2013, following the control of the People’s Protection Units (YPJ) over all Afrin, the building became the base of the Yazidi Cultural Union, which was established at that time.

In 2018, Turkey took over Afrin through Operation Olive Branch, which it launched against the YPJ with support from the SNA. On 2 August 2018, Amnesty International released a report in which it described the Turkish presence in Afrin as an occupation, testifying to the violations committed by pro-Turkish groups and the Turkish forces themselves. 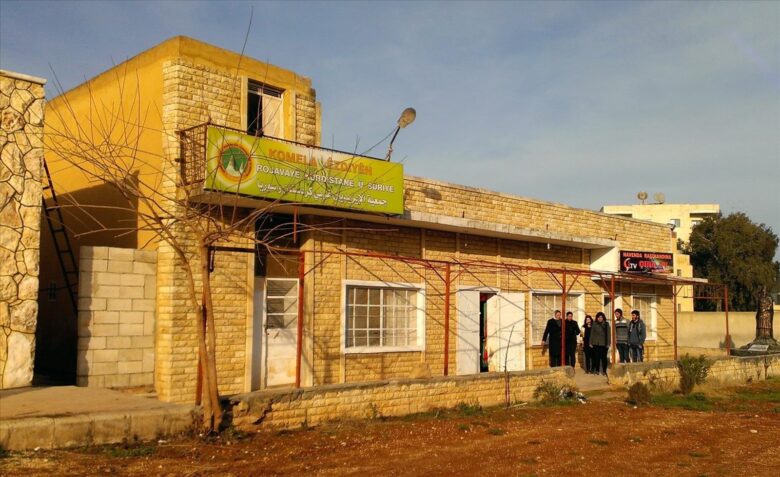 Image (1) – The headquarters of the Yazidi Cultural Union in Afrin. Credit: Thomas Schmidinger.

The Destruction of the Yazidi Cultural Union

In 2018, Turkey took over Afrin through Operation Olive Branch, which it launched against the YPJ with support from the SNA. In the context of hostilities, the 1st and 2nd Corps of the SNA blew up the Yazidi Cultural Union and destroyed the Lalişa Nûranî monument and the Zoroaster statue.

After the demolition of the building, the place remained unchanged until 29 June 2020, when Afrin’s local council, operating under the Syrian Interim Government, announced it was laying the foundation stones for a new school on the ruins of the Yazidi Cultural Union, under the name “Afrin”, which was later changed to “Al-Imam wa Al-Khateeb”.

We should note that some media outlets reported that the building was hammered by an air strike. However, sources within the SNA confirmed to STJ that the building was deliberately blown up by members of the SNA. The sources did not reveal the reason, but it may be the presence of Yazidi/Kurdish symbols in it. 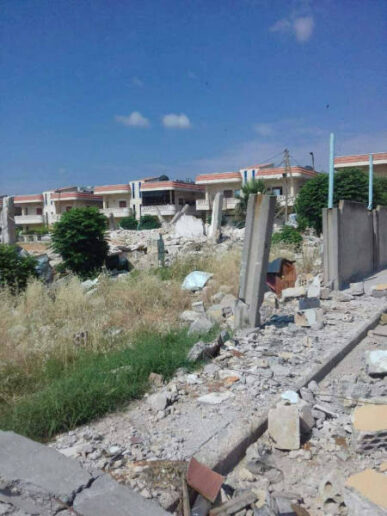 Image (2) – The headquarters of the Yazidi Cultural Union after it was destroyed. Source: ANF News. 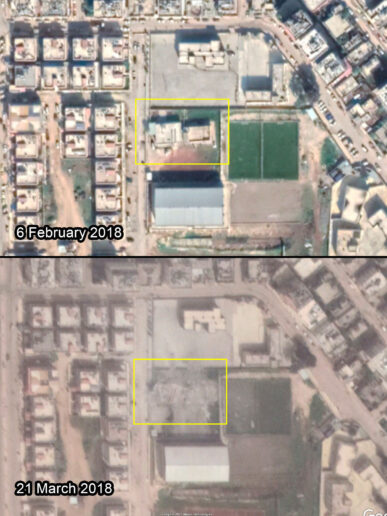 Image (3) and Image (4) – Satellite images showing the Yazidi Cultural Union before and after it was destroyed.

STJ spoke to a source from within Afrin’s local council, who confirmed that the latter seized the land that was occupied by the Yazidis Cultural Union citing it is a state property. The source explained:

“Organizations active in Afrin, in coordination with the local council, usually carries out surveying operations to find unoccupied land and buildings in order to set up projects in them, if possible. This is what happened in the case of Al-Imam and Al-Khateeb School. The White Hands Association/Beyaz Eller Derneği informed us of its willingness to build a school on this land, since it was unoccupied and we handed it over to them under a contract No. 60706 that was signed on 10 May 2020.”

The contract was signed between Afrin’s local council on the one hand and the White Hands Association/Beyaz Eller Derneği and the Kuwaiti Sheikh Abdullah Al Nouri Charity Society on the other. The school was opened on 23 September 2021 to start its first school year 2021-2022. According to the local council’s announcement, the school has 29 equipped class and administration rooms and it only requires nominal fees for enrollment.

STJ learned from credible sources that those leading the project chose “Al-Imam wa Al-Khateeb” as a name for the new school because it is similar to the name of religious schools owned by the Turkish Islamic Waqf. The purpose of this was to access to facilities usually given to the Waqf institutions in the Syrian areas occupied by Turkey.

The “Al-Imam wa Al-Khateeb” School is teaching an Arabic curricula, which includes three subjects on the Islamic Sharia, imposed by the Syrian Interim Government. The curricula also includes a Turkish compulsory subject and a Kurdish optional subject for the Kurdish students in all grade levels. 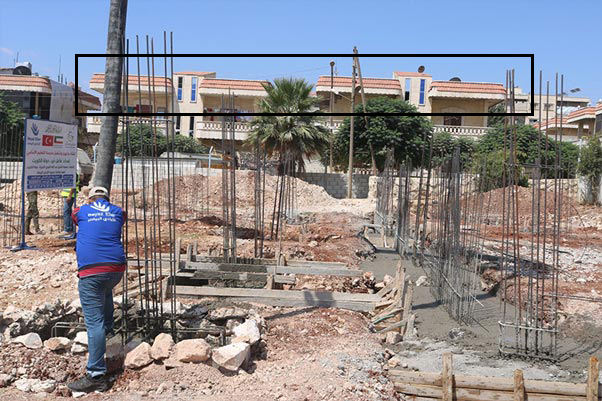 Image (5)– An image of the construction of the school on the ruins of the Yazidi Cultural Union building. Credit: White Hands Association website.

Image (6) – Digital analysis of the image linking pictures after the destruction to the beginning of the construction of the school. Credit: ANF News. 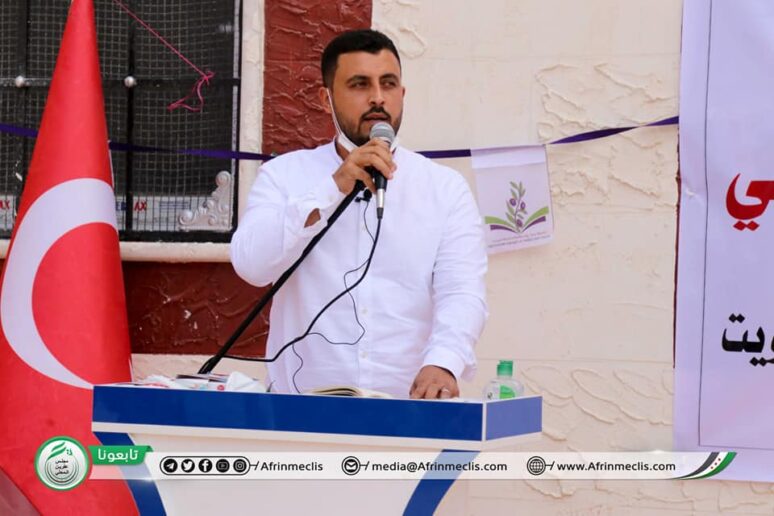 Image (7) – The opening ceremony of the Al-Imam wa Al-Khateeb School on the ruins of the Yazidi Cultural Union. Credit: Afrin City Local Council. 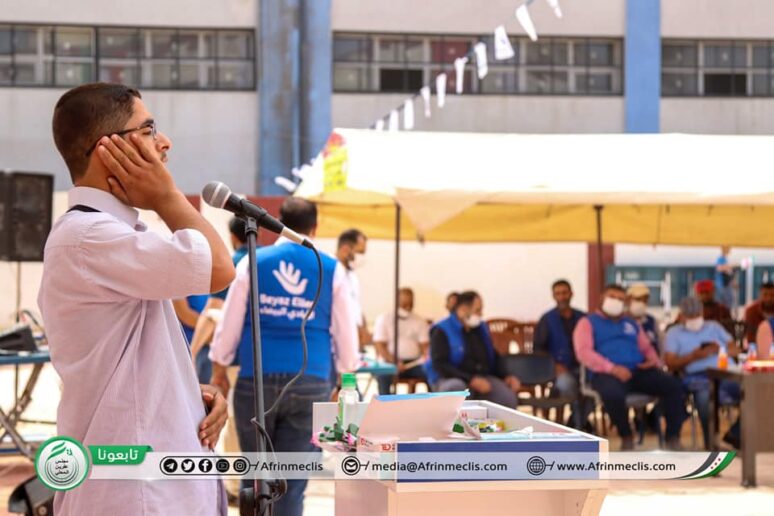 Image (8) – The opening ceremony of the Al-Imam wa Al-Khateeb School on the ruins of the Yazidi Cultural Union. Credit: Afrin City Local Council.

The Religious and Cultural Significance of the Yazidi Cultural Union

The former member of the Yazidis Cultural Union, Sheikh Zahr al-Din Hasan Abdalo, who is currently residing in the al-Shahba region, testified to STJ:

“The Yazidi Cultural Union used to run all fields of the Yazidis’ lives. The Union served as a civil registry, a magistrate court, a religious education center, and a cultural center that familiarizes the Yazidis with their customs and traditions and organizes ceremonies for their religious events.”

Afrin has 19 Yazidi shrines including:

Many of these shrines have been vandalized, looted and destroyed.

The Organizations that Established the School

The White Hands Association/Beyaz Eller Derneği is a charity organization with wide-reaching humanitarian relief sectors. On 27 February 2013, the organization was authorized for work in Turkey; its headquarters were established in Istanbul under the title ‘BEYAZ ELLER YARDIMLAŞMA DERNEĞI”. On 24 September 2014, the branch office in Antakya was authorized to implement projects and monitor the situation on the Turkish-Syrian borders.

The White Hands Association always states in its publications on social media that it is the executive arm of the Kuwaiti charity Sheikh Abdullah Al Nouri in the region and operates with funds from it.

Sheikh Abdullah Al Nouri Charity Society is a Kuwaiti charity that contributes to the building and development of needy communities through educational and advocacy programs, through enhancing communication with supporters and beneficiaries, and optimizing investment of human and financial resources. The name of the Sheikh Abdullah Al Nouri Charity, its logo, and the Kuwaiti flag appeared clearly in the photos and videos of laying the foundation stone and the opening of the Al-Imam wa Al-Khateeb school.