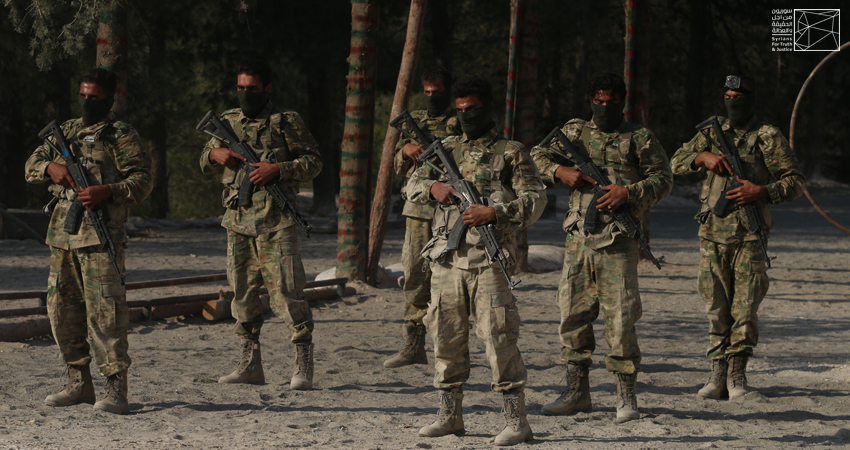 Fighters of the National Army, of the opposition, in a training camp in the village of Qatmah, rural Afrin.

Arbitrary arrests/detentions by the Turkish forces and groups affiliated to the National Army against people of the Kurdish-majority city of Afrin,[1] increased in November 2019 compared to the number they made in the previous October; STJ field researchers confirmed the arrest/detention of 72 people including five women and a girl child.

23 of those arrested were later released, after paying varying ransoms/fines, while the fate of the rest remains unknown as of the date of the publication of this report.

According to locals and field researchers the Turkish Intelligence Service, the Political Security, the Military Police, the Levant Front/al-Jabha al-Shamiya, the Suleiman Shah Brigade (also known as al-Amshat), al-Hamzah/al-Hamzat Division and the Sham Legion were behind those arrests/detentions.

Most of the witnesses and locals met by STJ confirmed that the majority of arrests were conducted arbitrarily and didn’t follow the due process. As many of those arrested hadn’t been informed of charges against them by written notices or orally, contrary to the statements made by the former spokesman of the National Army that the arrests were carried out within the legal framework.[2]

Afrin district (Afrin city and the administratively attached villages) witnessed house raids led to 22 arrests, including three women and a girl child. The arrests made by the Political Security, the Military Police, al-Hamzah/al-Hamzat Division and the Sham Legion:

Also, on the same day, a patrol of the Military Police and the Turkish Intelligence raided the house of Nuri Qara Ali located near the restaurant “Vin” in the city of Afrin, and was arrested with his two daughters, Khadija and Amina on charges of photographing and sending pictures to people outside Syria. Nuri, however, was released because of his old age, while the fate of his two daughters is still unknown.

In a separate incident on the same day, members of the Sham Legion group raided several houses in the village of Kabashin and arrested six people for unknown reasons. The detainees were taken to a prison/detention center of the group located in the village of Iskan/ îska‏. According to the witness, the detainees are: Ismail Jamu Haidar, Husain Abdu Mohammad, Ghassan Louay Esau, Riyad Qushu Esau, Zahir Suleiman Abdu and Mohammad Abdul Qadir Hindi.

Regarding the incident, a village resident said to the field researcher:

“Members of the Sham Legion group arrested Roya’s father in early November on charges of insulting the Islam and it was reported that he was beaten and tortured. Thus, Roya along with a number of women protested in front of the group’s headquarters, which obliged the latter to release him then. However, after ten days they detained his daughter and she was bailed out by her family which still being blackmailed and threatened by the group members.”

Shaykh Al Hadid district and its administratively affiliated village witnessed three house raid campaigns by the Suleiman Shah Brigade (also known as al-Amshat) and the Turkish Intelligence, led to the arrest of seven men and a woman:

The Bulbul district witnessed only one arrest, which was against Mohammad Rashid Ma’mo, a medical worker in Syria Immunization Group‎. The arrest conducted by unidentified gunmen on November 21, 2019, when Mohammad was on his way home from work. A man close to Mohammad’s family talked to STJ saying:

“Mohammad was riding a motorbike and on his way home with another person when a silver Sentra car got in their way and the armed men in it showed them a summons stamped with the seal of the Sultan Murad Division. However, at the entrance of the city of Afrin those armed men identified themselves as members of the Ahrar al-Sham group, and after they passed the checkpoint, they released the motorbike driver and kept holding Mohammad, and his fate remains unknown until now.”

Mohammad Rashid Ma’mo had been earlier arrested for a month for serving in the ranks of the Self-Defense Forces and later bailed out and obtained a clearance from the then Military Court.

The Maabatli district witnessed the arrest of 34 people on charges of performing the Self Defense duty under the Autonomous Administration. The arrests were conducted by the Levant Front, the Suleiman Shah Brigade and al-Hamzah/al-Hamzat Division. Some of those arrested were released on varying fines, while the rest were transferred to central prisons:

A local of the village said:

“Officials and former employees of the Autonomous Administration have kept all the records, papers and documents belonging to the people working with them, both the civilians and military. They did not destroy these documents but rather left them in their places, and it seems that groups affiliated to the National Army have found these documents and are searching for the names mentioned in the records to arrest them. “

The al-Hamzah/al-Hamzat Division and the Military Police arrested four people, including a woman, and released only one of them:

The village of Kafr Janneh witnessed the arrest of three locals and a displaced-called Abu Khaled- by the Levant Front group on November 16, 2019. The three locals were released while the displaced is still unaccounted for, knowing that his charge was sheltering women accused of joining the Islamic State (ISIL) and settling them in a house owned by Sadiq Hamdoush.

After investigating the incident, Sadiq was released with his two friends, while Abu Khaled remained in detention, and the reason of this seems to be that the women confessed having a shelter secured by him in the village of Kafr Janneh, when they were arrested earlier in the city of A’zaz, according to a villager.

[1] In a report released on August 2, 2018, Amnesty International described the Turkish presence in the Syria’s Afrin as an ‘occupation’. See: “Syria: Turkey must stop serious violations by allied groups and its own forces in Afrin”, Amnesty International, August 2, 2018. https://www.amnesty.org/en/latest/news/2018/08/syria-turkey-must-stop-serious-violations-by-allied-groups-and-its-own-forces-in-afrin/.