The Military Police, the Levant Front/al-Jabha al-Shamiya and the Sultan Murad Division made the bulk of the arrests; 20 of the detainees released for fines; two of them underwent severe torture 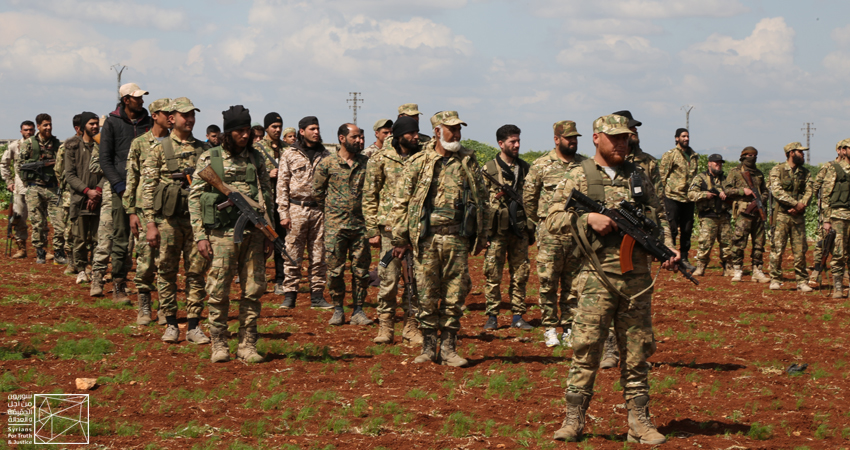 Members of the al-Jabal Battalion formed recently by Turkey in northwest Syria under the of the 47th Brigade. April 2020. Credit: STJ.

STJ has documented the arrest of at least 40 people, among them two women, throughout June 2020, in the Kurdish-majority city of Afrin by the National Army, affiliated to the Interim Syrian Government, operates under the National Coalition for Syrian Revolution and Opposition Forces.

Only 20 of those arrested have been released, while the 20 others, including the two women, are still unaccounted for.

According to locals, witnesses and STJ field researchers, the arrests were made arbitrarily – with no respect to due process – by the Military Police, the Levant Front/al-Jabha al-Shamiya, the Civilian Police and the Sultan Murad Division.

It is important to note that STJ couldn’t document all of the arrests made in Afrin’s districts of Shaykh Al Hadid, Rajo and Sharran, for security reasons.

Despite the strict instructions from the Turkish authorities to the armed groups not to carry out arrests, since it is a function of the Military Police, many of those groups made arbitrary arrests against civilians and released some for ransoms.

In the beginning of June 2020, a Military Police official in Afrin told STJ:

“Armed groups of the National Army received an order from Turkey to stop the arbitrary arrests they are making, saying that only the Military Police can conduct arrests within specific controls. This order was circulated to all Military Police centers after the regular monthly meeting was held between the Turkish governor and head of the Military Police.”

In its follow-up to the enforced disappearances and the arbitrary arrests carried out against the Kurdish population in Afrin, STJ met several military officials and members of the Military Police. Some of those met confirmed that that the Turkish authorities issued instructions preventing Military Police members from giving any statements or information related to their tasks and functions to any person or institute without obtaining security clearances from Turkey, or they will be held accountable. That is why military officials refrain from responding to the questions put to them.

However, a colonel in the Military Police in Afrin, said to STJ on the allegations of the repeated arrest of the same people for the same accusations and their release in exchange for fines or bails:

“We don’t arrest the person more than once for the same accusation, except if he/she communicated with a terrorist force; like the People’s Protection Units (YPG) or the Syrian Democratic Forces (SDF) after his/her release. The mechanism in place, however, is that following the arrest, the detainee brought before the judiciary, which looks into the case and provides the detainee with two options; either to follow the trial in prison or at large but in exchange for a bail of 1000 Turkish Lira, which he/she can recover if attends all of the court hearings until the issuance of the final decision in his/her case. This procedure is followed in all Military Police stations and branches.”

The colonel indicated that the charges against those detained (the characterization of the crime) was “joining an organization of a terrorist nature”. He also stated that all the arrests carried out by the Military Police were made upon orders from the military or the civilian public prosecutor.

However, statements of the detainees and their families contradict what was said by the colonel, as they asserted the repeated arrest of the same people without warrants form the prosecutor or any other official documents. They also confirmed that most of the arrests were made by armed groups and that some of the detainees were later transferred to the Military Police.

A. Arrests in Afrin

In June 2020, nine people, including two women, were arrested – for several reasons – in four separate raids against Afrin, conducted by the Civilian and Military police accompanied by Turkish forces. Only three were later released, two of them had been severely tortured by the Military Police.

1. On 6 June, a witness, who works in the industrial area in Afrin, confirmed that a patrol of the Military Police arrested Abdo Murad and Mustafa Jeleh, who sell motorcycles, from the city center on charges of planting bombs in motorcycles. The two detainees were held in the Military Police building and released on 11 June after the charges against them had not been proved. It was found that they were severely tortured while being investigated.

2. On 12 June a patrol of the Military Police accompanied by Turkish forces and police dogs, surrounded and stormed a home in al-Achrafieh neighborhood near al-Muhdatha school, arresting all members of the family staying in it, who are; Uthman Majeed Na’san, his wife Zeinat and their two sons Mohammad and Jankin, for accusing the latter of planting bombs in motorcycles. Actually, materials used to prepare explosives were found at their home. Regarding this, a person close to the family told the field researcher:

“The family was framed; those materials found had been planted in their home for revenge reasons, as the family had a sharp dispute with a member of the Levant Front/al-Jabha al-Shamiya shortly before their arrest. All residents of the neighborhood believe that those materials were planted in the family’s home to avenge them, citing that the home was robbed entirely and seized by the Levant Front/al-Jabha al-Shamiya after their arrest which continues to this day.”

It is worth mentioning that Nu’man was arrested three times before on the same charge, and released for varying fines.

4. On 3 June, a Civilian Police patrol stormed the home of Silvana Abdulrahman, 45, who hails from the village of Sanya in the Maabatli district, and the clothing shop she works in, in al-Achrafieh neighborhood of Afrin, arresting her. Her husband, Sameer Issa, was also arrested when he went to ask for her whereabouts after a week. However, the husband was released after two weeks, while the woman’s fate is still unknown.

B. Arrests in Rajo

The district of Rajo witnessed the arrest of at least 11 people by the Military Police, which released only two of them:

Throughout June, the district of Maabatli witnessed the arrest of 16 people by the Civilian Police and the Levant Front/al-Jabha al-Shamiya, who released 12 of them later.

D. Arrests in the districts of Shaykh Al Hadid, Bulbul, Sharran and Jindires

STJ couldn’t document all the arrests made in the districts of Shaykh Al Hadid, Bulbul, Sharran and Jindires, but it obtained information from local sources about the arrest of four people at least in the four districts, three of them were later released: