September 14, 2022 89 views Download as PDF This post is also available in: Arabic Font Size A A A 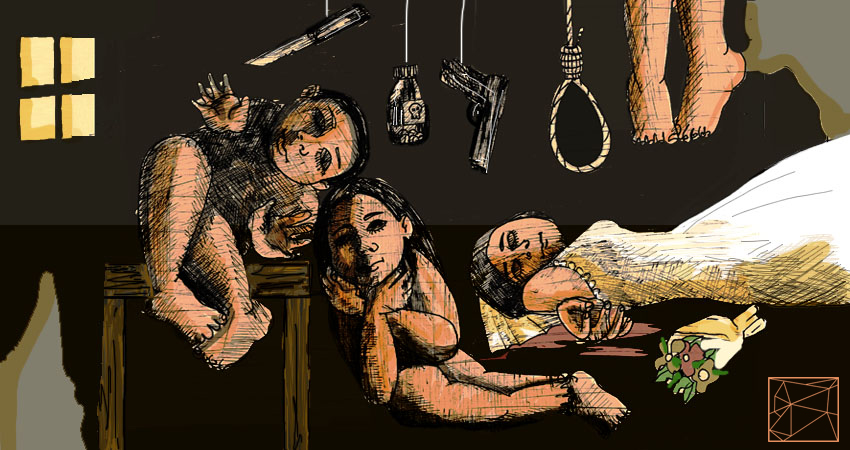 A painting by the Syrian artist Yara Issa on the occasion of World Suicide Prevention Day. Credit: STJ.

Cases of suicide and self-harm increased sharply across Syria throughout 2021 and over the first eight months of 2022. The individuals are from all age groups, including children, teenagers, women, and men.

Between early 2021 and early September 2022, STJ documented no less than 330 suicides throughout Syria, and obtained the details of at least 98 cases, registering the names of the victims, dates of their suicides, and their separate contexts. Categorized by age and gender,51 men, 9 boys, 28 women, and 10 girls died by suicide.

STJ mapped out the registered cases:

On 7 July 2022, the Director-General of the Syrian Forensic Medicine Authority, Zaher Hajjo, made a statement to al-Watan newspaper, which is often aligned with the SG.[1] He revealed that the authority had recorded 93 suicides since early 2022—namely, the first half of the year. The cases included 67 males and 24 females.

In a second statement to the same newspaper in late 2021,[2] Hajjo said that the authority recorded 197 suicides in 2021, among them 109 males and 48 females. He highlighted that these cases occurred in the provinces of Damascus, Homs, Tartous, Latakia, Aleppo, and As-Suwayda. According to the Syrian government, Sara, and STJ:

In an exclusive statement, Sara Spokeswoman, Arzo Tammo, reported that the organization corroborated nearly 24 suicide cases, in addition to 33 attempts between 2021 and up to July 2022 in AA-held areas.

Additionally, STJ documented at least 6 suicide attempts across Syria and no less than three suicides in countries where Syrians have sought asylum.

Examining the cases aggregated into the database, STJ’s researchers noticed several patterns in the motivations behind the suicides. In some cases, individuals killed themselves because of poverty and dire living conditions – conditions directly caused by the Syrian conflict which has now lasted over a decade. In other cases, individuals were struggling with intense psychological struggles.

Notably, domestic violence and early marriages are among the most recurrent motivations for suicide, particularly among women and children.

While adult suicide cases were recorded across Syria before, recent documentation has tragically shown the proliferation of suicide within younger age groups. The victims included children and teenagers, some of whom were only 12 at the time of death.

In a 2022-report, Save the Children reported that “Almost one in five of all recorded suicide attempts and deaths in Northwest Syria are children,” citing out that the total number of suicides in the area recorded in late 2020 has “jump[ed] by 86% from the first three months of 2020.”[1]

Based on the interviews conducted for the purposes of this report, researchers with STJ concluded that the reported figures are only a fraction of the true number of cases, which remain underreported because families choose to cover up suicides in an effort to avoid “social stigma.”

In response to the increasing rates of suicide in Syria, the World Health Organization (WHO) announced they had been supporting the prevention of 3,400 suicide cases in Syria since 2013.[2]

STJ consulted with several researchers who are currently investigating suicide in Syria. The researchers recommended that concerned organizations, both domestic and international, begin to provide and educate communities on mental health services and support the development of psychological care services. Furthermore, they advocated for the creation of a socio-psychological support network, particularly for Syrians who have experienced trauma.

Additionally, the researchers stressed the importance of investing in efforts to understanding the challenges facing Syrians of all ages, to support efforts establishing a culture of social empathy, and to support victims of violations rather than blame them, particularly women and girls who suffer sexual and physical abuse.

Addressing authorities, researchers recommended that concerned bodies work to improve living conditions and the financial status of the population and establish a culture of anti-bullying and non-discrimination, which fosters an environment and culture of care.

For the purposes of this report, STJ conducted a total of 27 interviews. The interviewees were mostly family members or sources close to the individuals who died by suicide in Idlib, Aleppo’s northern countryside, al-Hasakah, Qamishli/Qamishlo, Rif Dimashq, Daraa, and As-Suwayda.

For professional commentaries on the cases, STJ reached out to a sociologist who isspecialized in social and psychological support, and a psychologist, trained and certified in the development of human resources and personality types.

The majority of the interviews were carried out in July and August 2022, both online and offline.

Moreover, STJ consulted several open sources which addressed suicides in Syria to corroborate- the information made available on the cases documented in the report.

Throughout this report, STJ uses pseudonyms to refer to the victims who ended their lives.

To read the report in full (61 pages) as a PDF, follow this link.

This report covers the topic of suicide. You can access a suicide hotline in northwestern Syria at 00352681133899. You can see a comprehensive list international suicide hotlines here. Please take care.