On Sunday, November 11, 2018, detainees at Hama Central Prison went on a hunger strike to protest the arbitrary verdicts issued against them by both Military and the Anti-Terrorism courts. The strike came a few days after the visit of Syrian government officials to the prisoners which coincided with initiating the process of transferring 11 of them to Saydnaya Military Prison to carry out their death sentences, which were reported earlier.

Several military field court detainees, participating in the strike, talked to STJ’s field researcher online, about their demands and the details of their detention, saying that 68 inmates went on a hunger strike to protest their unfair judgments dictated to them by government officials and to demand a general amnesty for those on the death row. 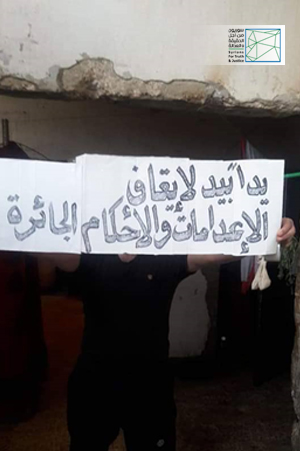 A placard held by a detainee in Hama Central Prison reading “together to stop executions and arbitrary sentences”.
Taken on November 12, 2018.
Photo credit: STJ

The first testimony STJ’s field researcher obtained was from a 30 years old detainee, who said:

"I was moved to several security branches in Hama and Damascus since I was arrested in 2013 before I got here in 2015, after I bribed many lawyers and judges with large sums of money, but alas, I was sentenced to death in 2016. In the last week of October 2018, I appeared before a court located in the Sharia district of Hama[1], where I received my death sentence by the judge who also informed me that I will be taken to Saydnaya with the rest of my fellow detainees, who received the same sentence".

When summoned to the court, detainees are taken blindfolded by a van, in which they severely beaten and humiliated on the way from and to the prison, the first witness added.

The second testimony was given by a 40 years old detainee, caught in 2014:

"I was transferred from a security branch to another in Homs and Damascus, where I was repeatedly tortured, especially with electrocution, causing me kidney failure, which necessitates being taken to the National Hospital for dialysis sessions twice a week. I always been subjected to torture and abuse there. My health is deteriorating. I appeal to the Red Cross to intervene and rescue me.  "

The third testimony given by a 24-year-old university student detained since 2016:

“During my arrest in the security branches in Aleppo, Damascus and Hama, I was forced to sign false confession of murder, robbery and rape, extracted from me under torture, on which I was eventually sentenced to 20 years' imprisonment and transferred to Hama Central Prison.”

The fourth testimony from a 35 years detainee, held since 2013:

"I was arrested on alleged charge of financing terrorist groups, prepared by an informant for

security services. I have been transferred between many security branches in Hama and Damascus, the last of which was the branch 215 where the severe tortured caused my right leg to be cut and led to my transfer to the National hospital and then to Hama Central Prison, where I received a 10-year prison sentence.  "

Several detainees at Hama Central Prison expressing fears of executing their suspended death sentences[2], after being informed of their transfer to Saydnaya Military prison. STJ managed to obtain 3 documents, kept from publishing for security purposes, include names of the inmates and sentences passed against them;

[1] The detainee did not recognize the name of the court he appeared before.