November 9, 2018 641 views Download as PDF This post is also available in: Arabic Font Size A A A

On 5 July, the People’s Protection Units (YPG), the Women’s Protection Units (YPJ), and the ‘Democratic Self-Administration in Rojava’ demobilized 149 children from their ranks and signed Geneva Call’s Deed of Commitment protecting children in armed conflict during an official ceremony in Ramalan, in the Kurdish region of Syria.[1]

On September 5, 2018, The Syrian Democratic Forces’ (SDF) General Commander Mazloum Abdi, issued a military order prevents the recruitment of persons under 18 years and instructs to send those already enlisted to the Education Authority of the Autonomous Administration in southeastern Syria to resume their education.[2]

Human Rights Watch said in a report in August 2018 that the recent data of the UN showed a disturbingly high increase in child recruitment by the YPG last year. The armed group should immediately demobilize children in its ranks and stop recruiting children, including from families in displacement camps under their control.

Human Rights Watch sent a letter on June 29, 2018, to the group and to the executive committee of the Kurdish Democratic Union Party-led Autonomous Administration describing the pattern of child recruitment, requesting information on measures they were taking to prevent recruitment and use of children in hostilities, and asking whether the armed group obtains parental consent and allows family communication for recruits under 18.

The administration replied on July 16 stating that families are informed when a child enlists but that children may join without parental consent. The letter acknowledged that children ages 16 and 17 can enlist, but said they are not placed in combat roles. Instead, the letter states, “they are placed in special centers where they receive intellectual and occupational training.” It said that girls from displacement camps have sought protection from the forces to escape early marriage, harassment, and rape, and that the women’s unit has provided them with shelter and protection.[3] 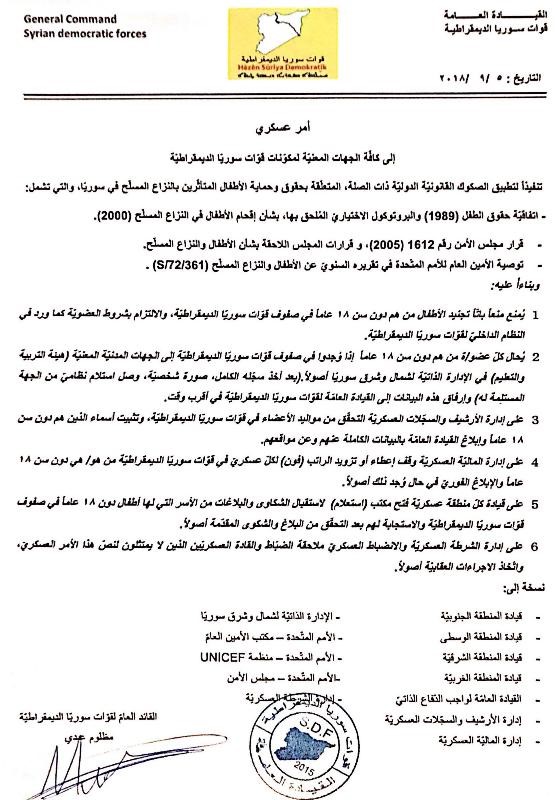 The military order issued by the SDF General Commander, Mazloum Abdi, on September 5, 2018.
Photo credit:
website of the SDF.

At least two minor girls were enlisted lately into the YPJ militias, affiliated to SDF, contrary to the military order issued by the latter’s General Commander, witnesses confirmed to STJ during October 2018.

On October 12, 2018, the 17-year-old Yasmine Aref, a member of the YPJ, died of her wounds, which she sustained during the al-Jazeera Storm campaign launched by the SDF forces, on September 9, 2018, to expel the Islamic State aka ‘ISIL’, from its last strongholds in the al-Jazeera region and the eastern rural villages of Deir ez-Zor city.

Sources within SDF confirmed to the parents that the two children, Sulaima and Awish, were still in the camps of YPJ at the time of preparation of this report, October 29, 2018, despite the numerous requests and appeals made by the two girls’ parents in their repeated visits to SDF’s centers and camps. However, the latter did not make any official comment, confirms or denies what has been mentioned so far, STJ’s field researcher reported.

In March 2018, STJ reported the recruitment of the girl Avin Abdullah, nick named as ‘Avin Sarukhan’, aged 11.[4] The Organization has also documented the recruitment drives by the pro-Autonomous Administration forces in May and early June 2018 in the Raqqa and Manbij cities, as dozens of youths were conscripted under the ‘Duty of Self-Defense Act’ of 21 July 2014.[5]

On October 1, 2018, YPJ belonging to the SDF forces, enlisted the 14-year-old girl Sulaima Abdulrahman Ali into its ranks in al-Hasakah, said Sulaima’s mother ‘Faiza Hussein’. She stressed that YPJ’s recruitment of her minor daughter Sulaima, after taking her from in front of her prep school in al-Hasakah is a violation of children's rights to life and education:

“On that day, Sulaima was so late coming home from her school, Ahmed Za’al in the Tell Hajar neighborhood. I headed to one of her friends’ house, since the school was closed. She told me that she saw Sulaima getting into a van carrying YPJ combatants after they left school. I went then with my husband to almost every center of SDF, YPG and its women’s units to ask about Sulaima’s whereabouts and get her back. I showed them our family book to prove that my daughter is under 18 years of age. However, YPJ admitted the enlistment of my daughter in their ranks. But they said they couldn’t send her back home because she was attending a military training course. All the attempts we made to get our daughter back have failed so far”, said Sulaima’s mother.

Faiza al-Hussein indicated that her daughter Sulaima suffers from severe visual impairment and a handicap in the fingers of her left hand, as a result of burns she suffered as a child. 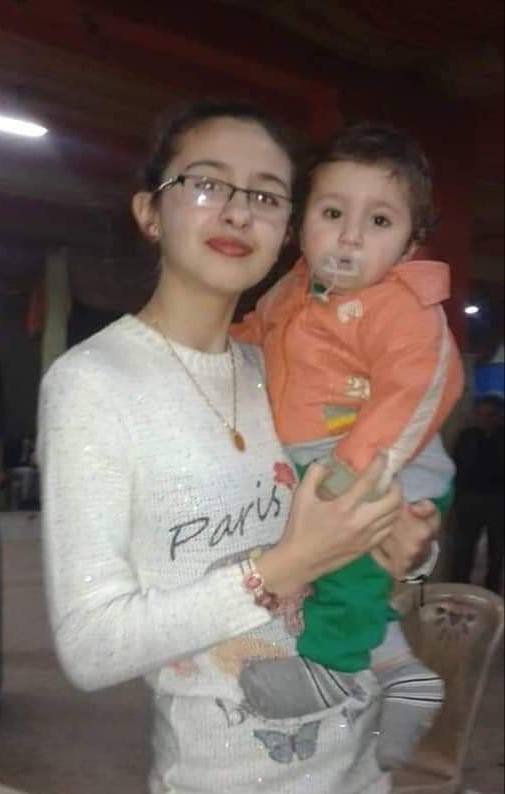 Sulaima Abdulrahman, 14, from al-Hasakah. She was recruited by the women’s units of the Autonomous Administration on October 1, 2018.
Photo credit: Faiza al-Hussein 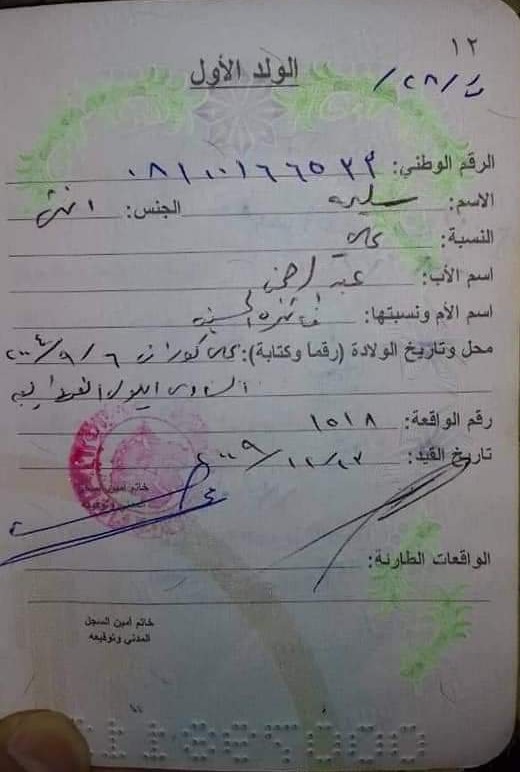 The personal data of Sulaima Abdulrahman Ali according to the family book, with her date of birth shown (2004).
Photo credit: Faiza al-Hussein.

After the enlistment of their 16- year-daughter into YPG’s women unit in Kobanî, parents of Awish Bouzan Bouzan appealed to local and international organizations and associations, concerned with the rights of the child, to reduce the phenomenon of child recruitment in the areas of the Democratic Union Party (PYD), on October 8, 2018:

“At 4:00 p.m. that day, my daughter got out of the house and didn’t return, we started going through her things, maybe find any clues to go on searching for her. We searched her cell phone and realized that she was in contact with a YPJ leader, who had persuaded her to flee the house and join the ranks of these militias. Immediately her mother went to the center of the YPJ in Kobanî, and after a long debate with officials there, they admit the enlistment of Awish into their forces and allowed her mother to see her only for a few minutes. Awish was wearing the uniform of YPJ. Her mother could capture her a photo in her cell phone. They refused to demobilize her, arguing that she had recruited voluntarily, despite the proves we presented that she is a minor. However, our attempts to get our daughter back continued, as we filed complaints to all the military bodies in Kobanî and to Esmat Sheikh Hasan, the joint head of the Defense, who told us that he did not have the authorization to order YPJ discharge our daughter. We are still making appeals to both military and civil bodies of the Autonomous Administration, but to no avail”, said Awish’s father. 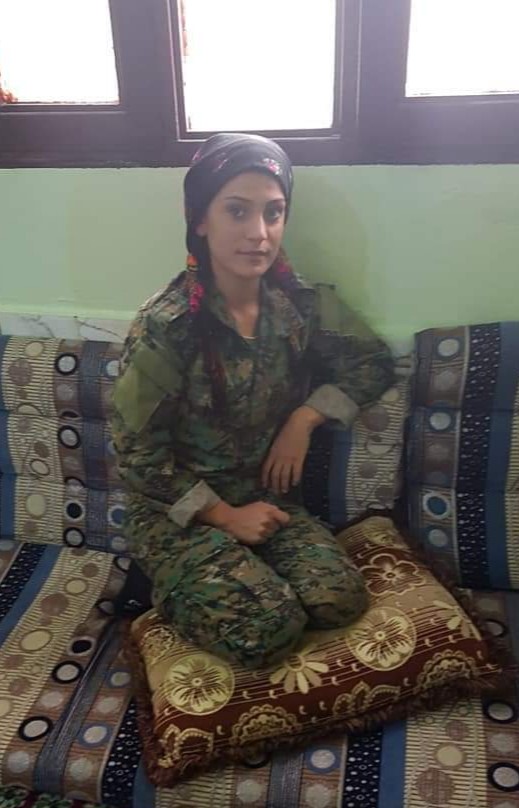 Awish Bouzan Bouzan,16, dressed in the uniform of YPJ militia after being enlisted into its ranks on October 8, 2018. Taken by: Fatima Sheikh Mohammed, Awish’s mother.
Photo credit: Bouzan Bouzan. 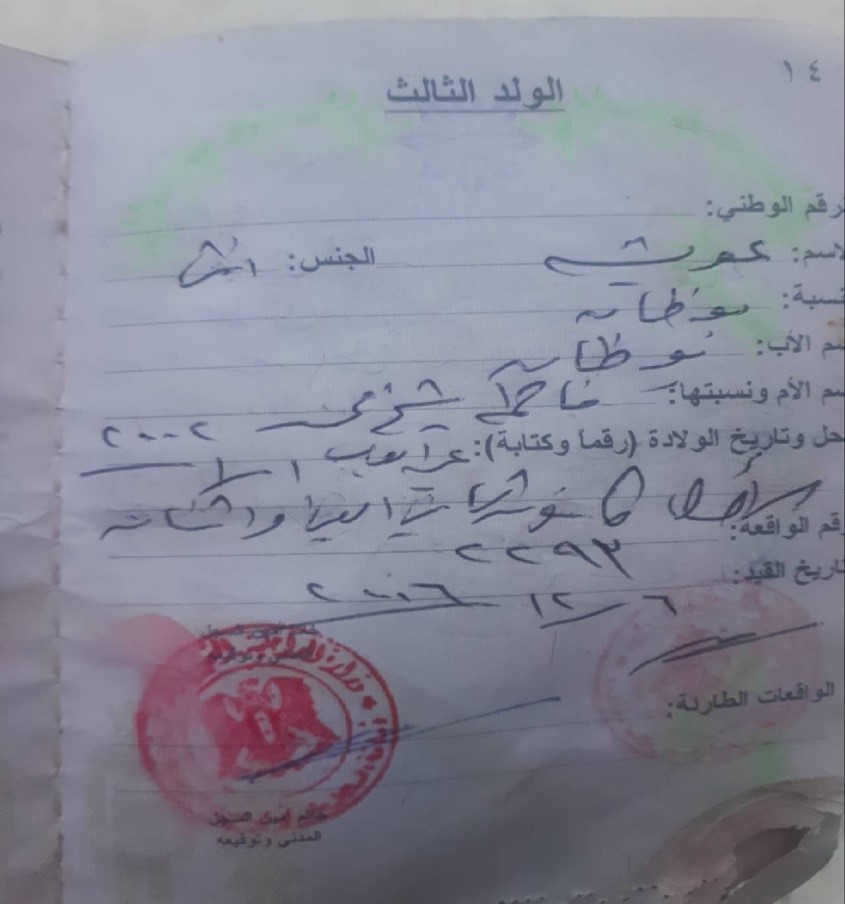 The personal data of Awish Bouzan Bouzan according to the family book, shows her date of birth (2002).
Photo credit: the witness Bouzan Bouzan.

In an email dated on October 16, 2018, STJ wrote to SDF enquiring about the legal base of its child recruitments and its compliance with its commitment to instruments it signed. However, the Organization has not received answers as of the date of this report, October 30, 2018.

On October 12, 2018, the city of Qamishli hold funeral service for the 17-year-old girl, Yasmeen Aref, who died of her injuries she received in Al-Baghuz town  while participating in  al-Jazeera Storm campaign, launched by the US-backed SDF forces, since September 9, 2017, against the ISIL, for the aim of expelling it from its last pockets in the al-Jazeera region, East of Euphrates and the eastern rural  Deir ez-Zor city.

Yasmeen Aref, nick named as ‘Barveen Amed’, born in 2001 in the village of Dekemdash, located in Sharran district, rural Afrin city. She joined SDF ranks when she was only 14, in 2015, according to a statement released by the General Command of the women’s unit of the Autonomous Administration. 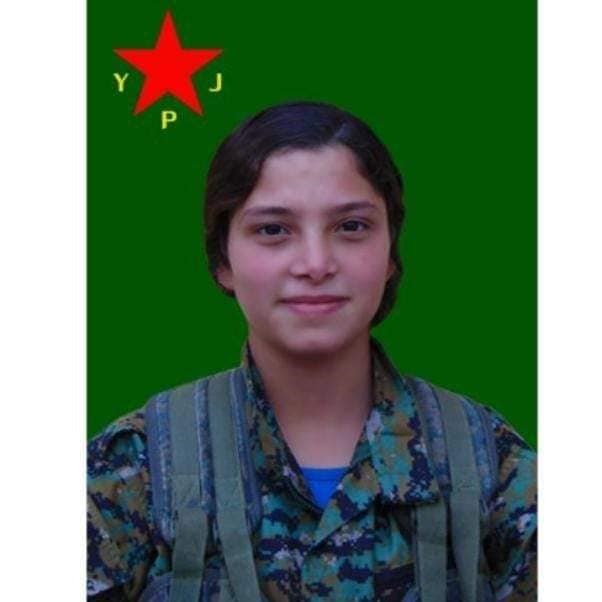 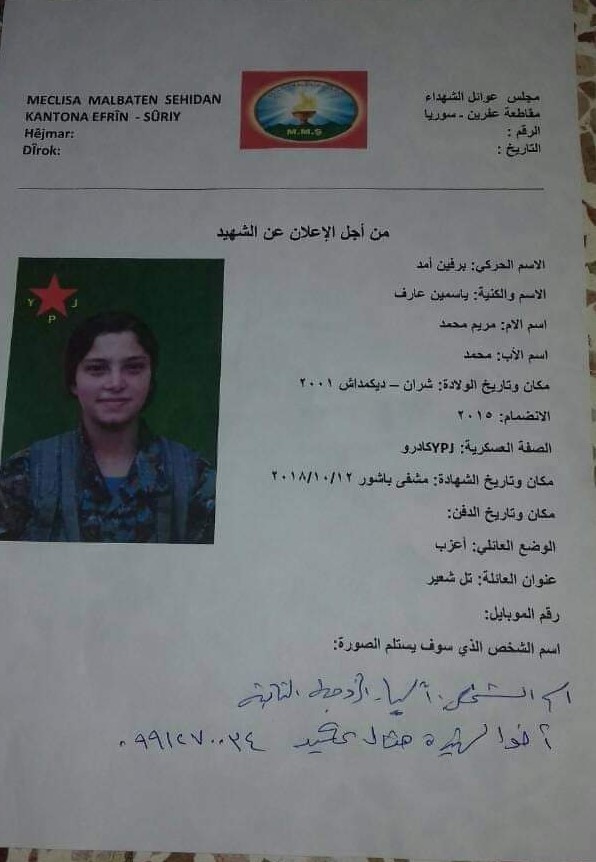 A document issued by the Martyrs' Families Council of the Autonomous Administration, confirming the death of the 17-year- girl Yasmeen Aref. 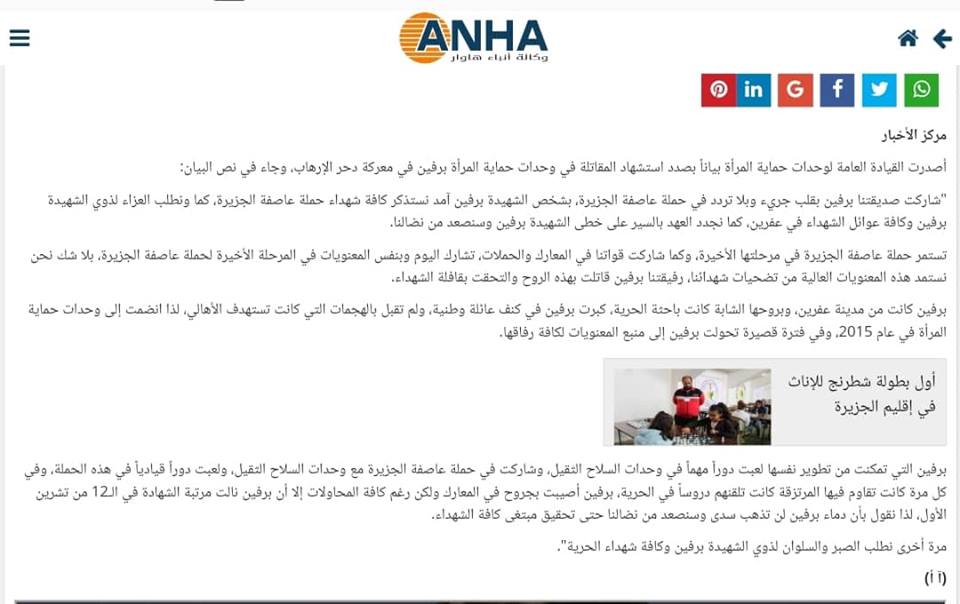 The statement issued by the General Command of YPJ, on the death of Yasmeen Arif, aka ‘Barveen Amed’, who joined its ranks in 2015, when she was 14 years old.
Photo credit: The Autonomous Administration’s Hawar News Agency.