The shelling took place on the evening of October 26, 2018, targeting a village within the range of the demilitarized zone; it killed three children, three women and a male teacher

On the evening of October 26, 2018, three children, three women and a civilian man died and others were injured in the Syrian regular forces shelling of a village in southern Idlib, according to testimonies obtained by Syrians for Truth and Justice/STJ. The shelling followed the Russian-Turkish Sochi deal,[1] which provides for the cession of violence and the establishment of a demilitarized zone.

On October 27, 2018, Jaber al-Bakri, director of the Al-Tamanah Media Center, told that the Syrian regular forces, stationed at the Abu al-Duhur village and nearby posts, targeted the village of Raffa, al-Tamanah district, with mortar shells, causing the death of a male school teacher, his three children and three women.

The Syrian Civil Defense published a video showing dead bodies being recovered from under the rubble and injured being tended. The persons killed are the following: Hussian Radawan al-Ahmad, a school teacher, his wife, whose name was not mentioned, and Rihab, Hala, Mohammad, the children of Hussian Radwan al-Ahmad, Turkiah Qadour al-Huwaish, an elderly woman, and Turfah Khalaf al-Abjan. 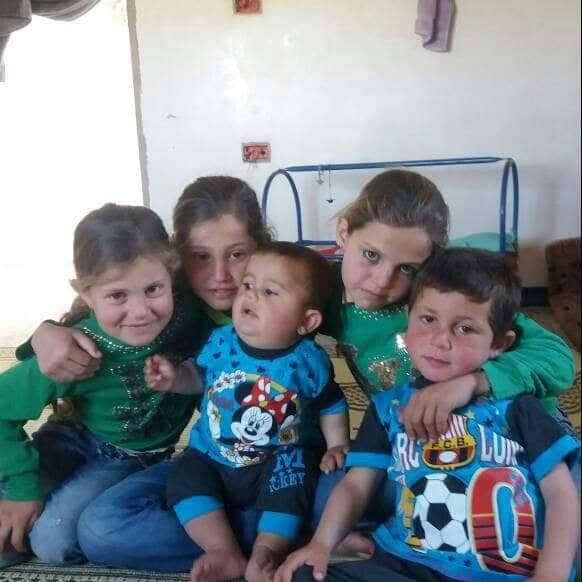 A photo showing the children of Hussian Radwan al-Ahmad, who died in the Syrian regular forces shelling of the Raffa village, southern Idlib, on October 26, 2018. According to local sources, the little girl and boy to the right and the girl on the left are the children who died in the same shelling.

According to STJ’s field researcher, the village of Raffa is located 6km from the line of contact at the Abu Dali village and 9km only from the Turkish observation post in Tell Sarman. The Raffa village is also located within the range of the demilitarized zone, from which the heavy arms have been withdrawn, as the National Front for Liberation announced earlier.

For several times, the Syrian regular forces targeted different areas in Aleppo, Hama and Idlib with shelling in a violation of the Sochi deal. The incidents resulted in many civilian casualties. Covering this, STJ published a number of detailed reports.

Convinced that the diversity that has historically defined Syria is a wealth, our team of researchers and volunteers works with dedication at uncovering human rights violations committed in Syria, in order to promote inclusiveness and ensure that all Syrians are represented, and their rights fulfilled.