At dawn, on October 27, 2018, masked gunmen tied up two security guards and stole equipment from the building of the Hama Healthcare Directorate

At dawn, on October 27, 2018, the building of the Hama Healthcare Directorate, affiliated with the Syrian Interim Government of the National Coalition for Syrian Revolutionary and Opposition Forces, was attacked by unidentified gunmen; equipment were looted from the building during the armed rubbery but no human casualties were recorded, according to the testimony obtained by Syrians for Truth and Justice/STJ.

On October 27, 2018, Mohammad al-Hwaish, director of the Hama Media Office, told STJ that unidentified gunmen robbed the building of the Hama Healthcare Directorate, located in the town of Kafr Nabl, around 3 o’clock at dawn. The gunmen tied up the two security guards on the shift, placed bags on their heads, but did not subject them to beating; and then, they stole the equipment, the value of which was not identified.

Commenting on the armed robbery, the Hama Healthcare Directorate published a succinct statement, clarifying neither the details of the incident nor the size of the equipment stolen, and merely held the “security forces in charge” responsible for maintaining security, stressing that it will continue its work. 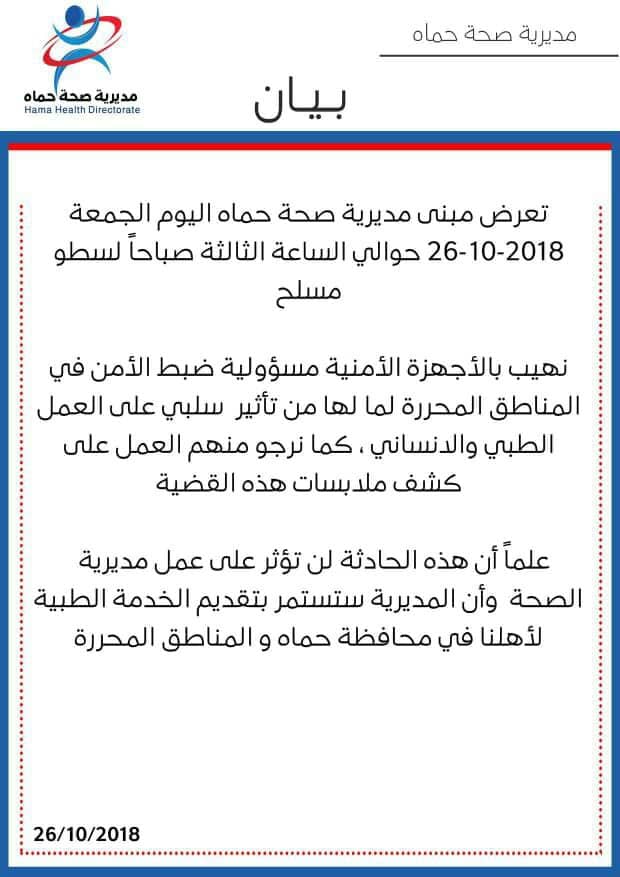 Copy of the statement made by the Hama Healthcare Directorate, affiliated to the Syrian Interim Government of the National Coalition for Syrian Revolutionary and Opposition Forces, concerning the armed robbery that targeted its building on October 27, 2018.

It is worth mentioning that medical staffs and facilities have been attacked several times in the regions controlled by the armed opposition groups, while perpetrators are still anonymous in most cases, the thing that triggered a number of hospitals and humanitarian organizations to suspend their activities protesting against targeting their staffs and buildings by similar incidents.  Covering this issue, STJ published several reports on various violations committed against doctors and medical centers.[1]