Kidnappings and Killings in Hama and Idlib Surge, People Concern

The child Haytham Omar Louk before being kidnapped and murdered in Idlib countryside on May 5, 2018. Photo credit: the victim

Introduction: The kidnapping and killing of civilians in the provinces of Idlib and Hama have been recently on the increase particularly in August and September 2018. Insecurity and the absence of checkpoints on the entrances and exits of the cities and towns have led significantly to the rise of such incidents.

At least 25 kidnapping cases were reported in August and September 2018, mostly for ransom. The recent insecurity in both provinces caused panic among the population and led to a public disapproval. People feel unsafe because the armed opposition groups cannot control the security situations.

STJ has already published a special report[1] on the kidnapping and killing of civilians in Idlib in June and May 2018.

Medical workers were not spared either. Four cases were reported against doctors in Idlib, most notably the kidnapping of Dr. Mahmoud al-Mutlaq at the night of June 9, 2018. The doctor was recovered on June 15 after $150,000 was paid to the kidnappers. Dr. Khalil Agha, director of the Sahel Free Health, was also kidnapped. [2]

I. Kidnapping in return for ransom causes panic in Idlib

Mohammed Nour al-Hamidi, a judge, was kidnapped from his own farmhouse in Isqat[3] town in the northern countryside of Idlib. On September 4, 2018 unidentified gunmen abducted him and seized his car. One of his relatives narrated to STJ:

"Al-Hamidi was a former director of the documentation center in the Syrian Civil Defense he was in charge of supervision of the statistics of the detainees and the missing persons. After twenty days in captivity, $70,000 and his car that is worth $5000 were handed to the kidnappers and on September 20, 2018 he was recovered. At the time, the kidnappers cast him at 7:00am at the intersection of Salqeen city in Idlib countryside. The perpetrators have yet to be identified.

Amer ash-Shahadah an-Nahri, a 25 years old man, married with three children, was kidnapped by unidentified gunmen from his farmhouse in Jarjanaz[4] town in Idlib countryside, where he resided after he displaced from Tell Halawah town in Sinjar countryside, on August 31, 2018. One of his cousins detailed to STJ:

"Unknown armed men in a silver Van coaxed him to get out of his home at 10:00pm and abducted him. Promptly, his wife rushed to inform his family and the police station in Salqeen that is run by Hayat Tahrir al-Sham (HTS). Soon, the searching process set off. shortly, the kidnappers contacted Amer's family and asked to arrange $150,000 as ransom. His family was able to lowered it to $100,00 and the negotiations are underway until this date".

The victim was tortured and beaten as to press pressure on his family to hastily pay the ransom. The kidnappers even sent an audio recording to his family including sounds of beating and torture.

The perpetrators are still at large and Amer's whereabouts is still unknown. The police are still hunting them, the victim's cousin said.

Wasel Satam al-Omar, from Kafr Battikh[5] town, was kidnapped in August 2018. His brother Ibrahim reported that Wasel used to work as a bread distributer and one day in the morning while he was on the way to the bread oven a group of gunmen in a white Van and others in a black Van intercepted him and took him to an unknown destination.

"A week later, the kidnappers contacted us and asked for a million dollar ransom. We told them that it's too much, we don't have that kind of money, so they reduced it to $500,000 which we could not afford either. A month later, another group contacted us claiming that they had bought my brother from the first kidnappers for $250,000 and asked us to repay them the sum in addition to $50,000 as a profit. Then negotiations started once again. They subjected my brother to excruciating torture and sent clips showing signs of torture on his body. They even vowed to amputate his limbs. Eventually we agreed on $110,000 and they conditioned the money had to be sent to an area in the outskirts of Idlib. On September 25, 2018, they throw my brother near the roundabout of Maarrat Misrin. The National Liberation Front hunted the kidnappers and caught them; they were identified as R.A., A.A. A.A., B.A., A.S, F.M, S, F.M. Some of the kidnappers are from Qatra village and the others from Samkeh village in Idlib countryside", his brother said.

Firas Ahmad al-Jasim, from Hawweeja village west of Hama was kidnapped while he was on his way to Kafr Nabl city[6] on August 12. Firas detailed the course of his abduction:

"In the morning I headed to Kafr Nabl to see a neurologist. It was 10:30 am when I reached the road linking Kansafra town to Balyun town in Idlib countryside. Some masked men ordered me to stop. At first, I thought they were affiliated to the armed groups, but they pointed a gun at my head, handcuffed me, blindfolded me and bundled me into the back of their vehicle. I was frightened because I thought they will murder me but they stripped me and robbed all of my belongings; my cellphone, $100, and SYP 15,000. Finally, they threw me in al-Mastuma town in Idlib countryside".

Being blindfolded Firas could not recognize the perpetrators. After the incident, he headed to a security branch run by the National Liberation Front in Qalaat al-Madiq city[7], in Hama countryside, and filed a complaint.

The culprits are still at large.

III. Pointing fingers at the Armed Opposition Groups in Idlib

One of his relatives recalled:

The victim described his captivity conditions during which he was blindfolded and handcuffed confined to a tiny room; no food, no drink, water closet once a day, besides beating. However, he could realize, through their callings on the Walkie Talkie that the kidnappers were combatants of Ahrar al-Sham al-Islamiyya. They used psychological torture as they kept telling him they would execute him describing a different way of execution each time."

A large sum of money was paid in exchange for his release. The victim was physically and mentally exhausted when he was released.

Additionally, Hayat Tahrir al-Sham (HTS) was accused of kidnapping two youths between the ages of 16 and 18 from Jabal al-Zawiya area[9]. Both were kidnapped on August 15, 2018 when they headed to their uncle's farm, which was previously seized by HTS. The two remained in captivity for ten days and were set free after $25,000 was paid as ransom, their cousins reported to STJ

IV. A child kidnapped, raped and killed in Hama countryside

Some kidnappings escalated to death, according to locals

The 12-year-old boy Haytham Omar Louk, from Qledin village in Sahl al-Ghab, was kidnapped on April 28, 2018 then murdered. He was a displaced residing with his family in Hayr Jamous Camp[10] on the Syrian/Turkish border. The kidnappers have not been identified so far.

The child's father narrated to STJ:

"I have three sons (Haytham Omar, Mohammed, and Marwan) and a daughter called Aisha. Everybody in the camp liked my son who always helped me in the shop. I usually work all day and in the evening go back home then visit some friends. One night I went back home at 10:30 and my wife said that Haytham has not come back home yet. We searched for him and we learned that an hour before he disappeared, he had been with the ice cream seller. It was the last time he had been ever seen. The ice cream shop is 50 meter from my home in a dark area where the electricity is often cut off. But actually the ice cream seller has an electric generator".

The father suggested that his son was kidnapped while on his way home although all the shops were still open in the area at the time.

"My son is so polite and has no problems with anybody. I waited impatiently for him six days and never gave up hope. on the seventh day, May 5, 2018 my cousin told me that my son was found dead dumped on the Faroqiya road, an area just 250 meters away from my home. His body was found under a tree. Somebody raped him then killed him. Somebody that my son knew well. The area from which he was kidnapped is inhabited by neighbors. I wished the kidnappers had asked for a ransom and not killed him".

The father could identify the body through his son's trousers and shoes. The dead's body had swollen and got black so the father could not look at it well, it was horrible. The security police affiliated to HTS arrived the crime scene but investigation is still ongoing by the Free Police of the Syrian Interim Government.

This incident was the first of its kind in the camps in north Syria. Other cases were for the exchange of ransom or for the human organ trade. Insecurity is rife in the armed groups-held areas in Hama countryside and the population fell unsafe. 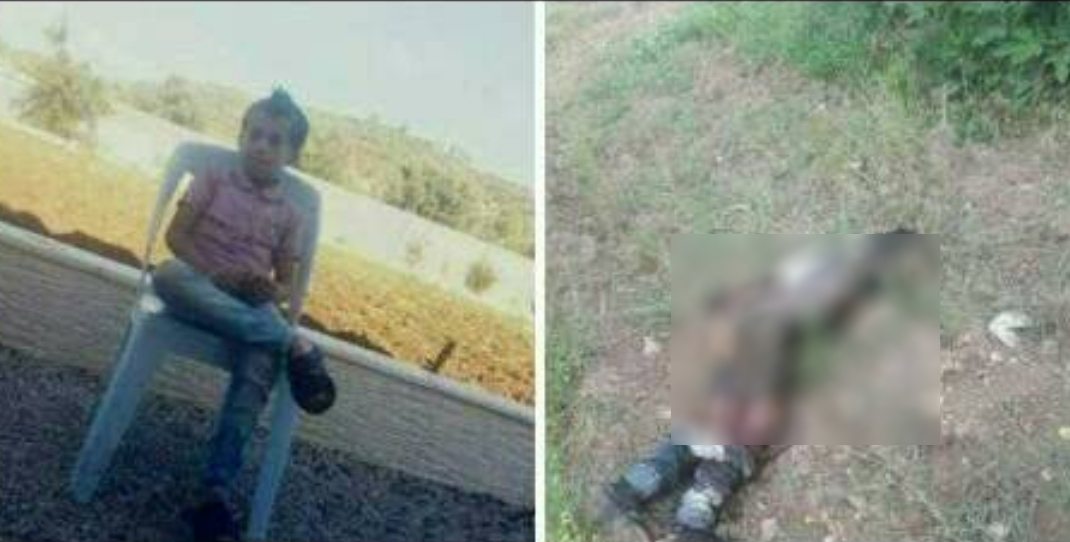 The child Haytham who was found dead in Idlib countryside on May 5, 2018.
Photo credit: the victim's family.

Kidnappings have soared in Idlib and Hama recently particularly in August and September 2018, Iyad Abu al-Joud, a media activist in Hama countryside, reported.

"The rife insecurity in Hama and Idlib outskirts triggered the mean-spirited people to snatch others in return for a ransom. Indeed the regular forces and their supporter militias of the National Defence Forces (NDF) also kidnapped many persons who commuted to regime-held areas in order to receive their salaries. Many went missing in Sahl al-Ghab area. No information was provided to their relatives who kept asking about them. Both Ibrahim ash-Shahoud and Mahmoud ash-Shahoud, from Qabr Fidda village, were kidnapped in 2015.

Ibrahim was kidnapped in the National Defence-controlled town of Hayaleen and he has been missing ever since. Whereas Mahmoud was driving his car on Suqaylabiyah road when militias of the NDF kidnapped him.

Negotiation conducted between their families and the Shabiha to agree on a ransom but the kidnapped have not been released yet".

The Syrian Network for Human Rights (SNHR) documented 23 cases in the provinces of Hama and Idlib in August 2018 alone.

[1] "A Remarkable Increase In Killings and Abductions of Civilians Due to Insecurity- Idlib province", STJ, July 5, 2018. https://www.stj-sy.com/en/view/618.

[4] Jarjanaz town is controlled by the National Liberation Front, which was formed on May 27, 2018 and contain Estimated 80,000 fighters. It is active in the countryside of Hama, Lattakia, and Idlib. The armed groups that merged to form the Front are: Ahrar al-Sham al-Islamiyya, Faylaq al-Sham, and Jaysh al-Nasr

[5] Kafr Battikh is controlled by the National Liberation Front.

[8] Has town is controlled by the National Liberation Front.