Fears of a Renewed Dispute and a Re-closure

While on September 27, 2018, the Administration issued a circular instructing all workers in its institutions to send their children to its schools to be taught its curriculum, and anyone who contravenes the resolution will be subjected to punishment or legal action.

Previously, on September 30, 2018, the activist Suleiman Yousef was arrested from his house in Qamishli by the Sutoro Forces of the Syrian Union Party (SUP), which acts under the umbrella of the Autonomous Administration, on allegations of criticizing the schools closure decision, and he released later on October 4, 2018.

STJ’s field researcher reported a popular outrage in response of the decisions mentioned, especially with the beginning of the new academic year 2018/2019. However, Department of Churches and representatives of the SUP reportedly reached an agreement on October 13 to keep teaching the Syrian government's curriculum and to allow Olaf Tao Foundation to give Syriac Language and Culture classes for the 1st and 2nd primary grades. 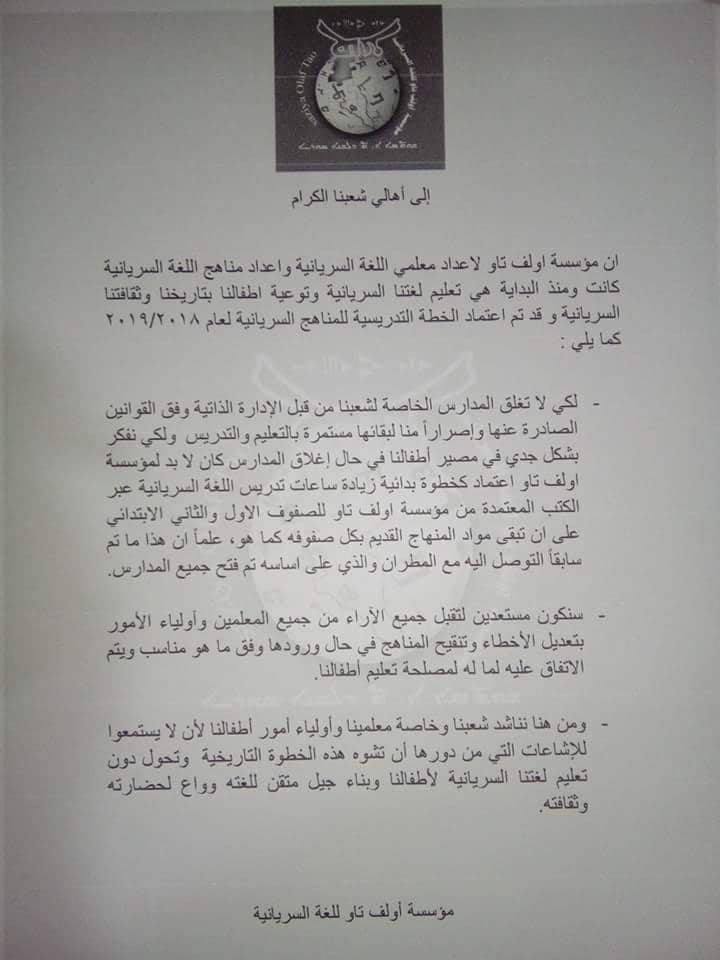 The statement issued by Olaf Tao Foundation, affiliated to the Autonomous Administration, on drawing up the educational system of 2018/2019. Photo credit: Olaf Tao.

In a statement released on October 14, 2018, the Syrian government's Educational Directorate based in al-Hasakah province, obliged Syrian state schools to stick to the government accredited study plan for the year 2018/2019, and to never cancel any class or teach outside the official curriculum. 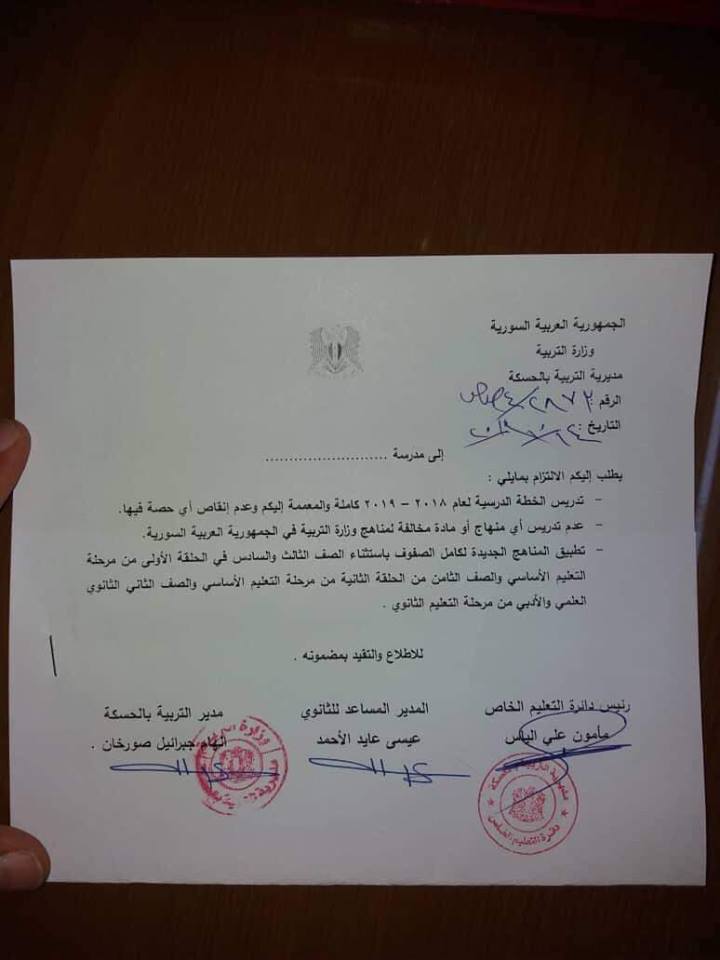 The decision issued by the Syrian Government's Educational Directorate based in al-Hasakah on October 14, 2018. Photo credit: Activists from al-Hasakah

It should be recalled that the Autonomous Administration shut down Christian private schools in August for not being licensed by it and for teaching the Syrian government curriculum[1].

An agreement reached between SUP and the Department of Churches to reopen all the closed Syriac and Armenian schools, except the al-Amal private school’s branch in Ad-Darbasiyah city, as confirmed to STJ by one of its workers in Derik/al-Malikiyah branch.

By the same token, schools in the in the so-called "security square", which were shut down on August 28, 2018 by the Sutoro Forces, reopened and the management of schools called the parents to send their children to resume their education.

Many families transferred their children from the Autonomous Administration schools in ad-Darbasiyah, Amouda and Terbe Spi/Qahtaniyah, and other towns, into the state schools located in the "security square" in al-Qamishli, which made the classrooms there overcrowded.

Parents have hired cars to carry their children to schools since they reopen in Qamishli, however, the Asayesh Forces[2] stopped those cars heading to state schools, get the students out of them besides and imposed fines on their drivers in October 2018.

On October 9, 2018, the general traffic management of the Autonomous Administration, issued the circular:

"Under the decree issued by the presidency of the Executive Council, any vehicle, regardless of its type, which drives students to state schools in Rojava territory will be seized. The decree demanding full compliance to Autonomous Administration educational system and curricula, warning of holding accountable any violators".

Accordingly, vehicles that transport teachers to Syrian regime-controlled villages, including those 35-40 km south of Qamishli on the road to Tell Hamis district, will be also seized and fined.

On October 10, 2018, the general traffic management announced the entry into force of its decision and the fine of many vehicles carrying students to state schools consequently. 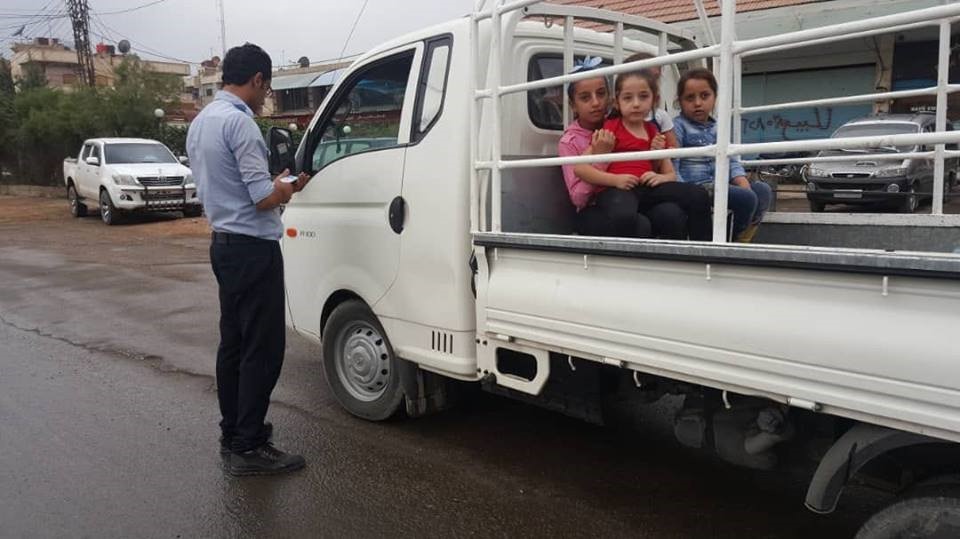 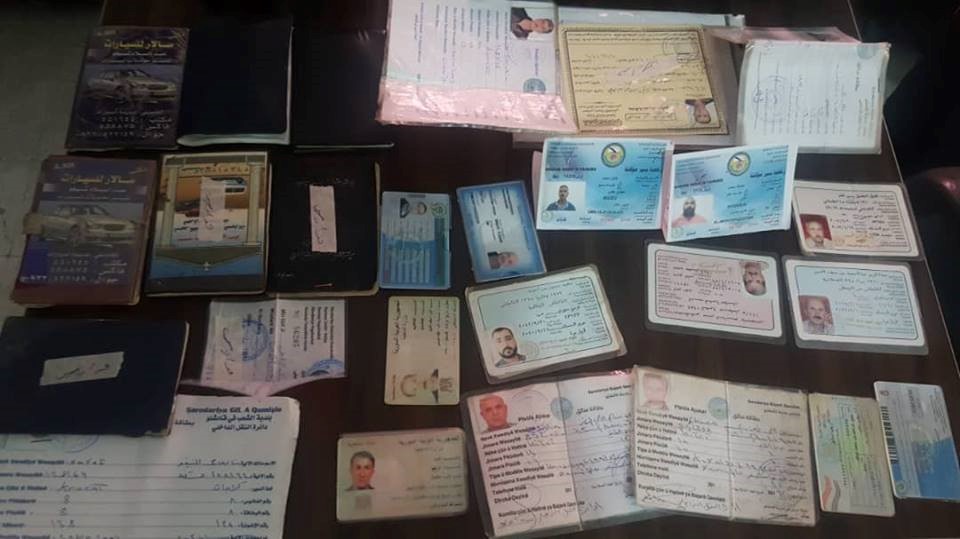 (J.M.) an owner of a shop near a Syriac private school in Qamishli, affirmed that some students leave their school bags and uniforms inside the schools, as a precautionary action, to avoid the questioning of the Asayish forces’ road patrols.

The mentioned circular outraged the local population, which was confirmed to STJ by (Y.A.), a local of Qamishli, who expressed dismay at seizing his driving license by a road patrol while driving his children to their state school by his own car.

On September 27, 2018, the Executive council of Autonomous Administration issued a circular that instructed all its employees to enroll their children in schools affiliated to it to be taught its curriculum, after some sent their sons to state school, the matter which arouse discontent among locals who were prevented from doing so:

“In accordance with the Social Contract terms and the note No. 431, received from the Educational Authority in al-Jazira Canton, all workers at the Autonomous Administration’s bodies and institutions must fully adhere to its educational system and its curriculum, except for the 11th and 12th secondary grades.”

Anyone who violates the above provisions shall be subject to a penalty.

The educational authority called all the councils in the Canton to cooperate with the educational departments and committees in applying the circular terms as of the date of its issuance. 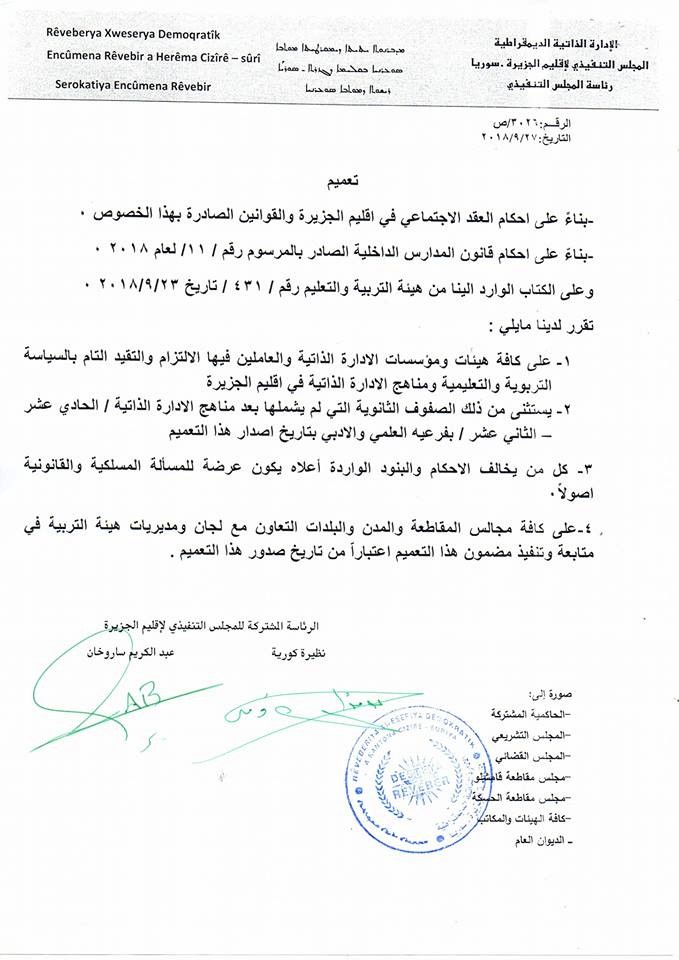 The circular issued by the Executive Council of the Autonomous Administration on September 27, 2018.
Photo credit: the Educational Authority

On September 30, 2018, a Sutoro Forces gang of about 20 gunmen, stormed the Syriac activist Suleiman Yousef home in Qamishli and capture him. Yousef confirmed this to STJ personally on Thursday evening October 4, 2018, following his release:

"I was arrested in a humiliating manner; more than 20 gunmen raided my home, searched it and seized my laptops. Through investigations, I learned that I was accused of criticizing policies of the SUP, particularly the educational, as my writings were the focus of questioning."

For its part, the General Command of the Sutoro Forces released a statement on October 1, 2018, in which it stated that some writers are exceeding their rights to free expression, to criticism and to express different opinions, in violation of the press laws and the humans’ dignity which is punishable act, referring to the writer Suleiman Yousef. 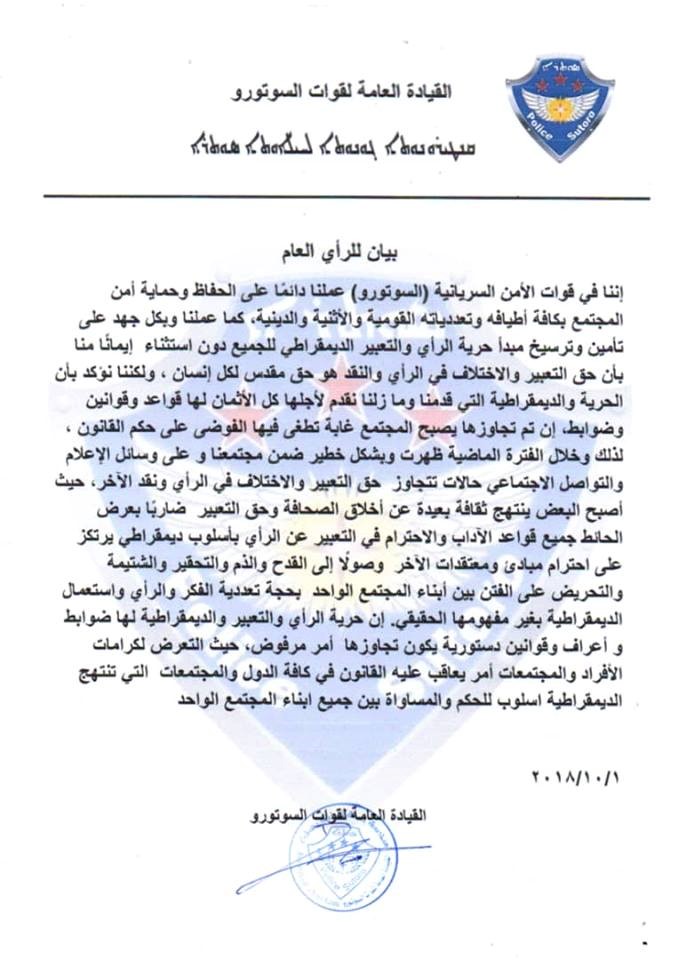 In a statement released on September 30, 2018, the media office of the Assyrian Democratic Organization (ADO), said that the arrest of Suleiman Yousef was on the backdrop of opposing the decision of the SUP to impose Syriac curriculum on the Christian private schools in the northeastern Syria. 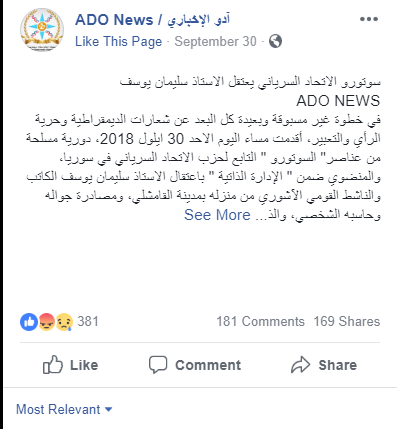 The statement released by the Assyrian Democratic Organization/ ADO on the arrest of Suleiman Yousef on September 30, 2018.
Photo credit: the media office of the ADO.