More than 500 pot-hunters were given the green light for conducting excavations in Kafriya and al-Fu'ah villages, Idlib countryside, during August 2018, after being taken over by armed opposition and jihadist groups, including Hay’at Tahrir al-Sham-HTS[1], Ahrar al-Sham al-Islamiyya Movement[2], and Suqour al-Sham Brigade[3], under an agreement[4] concluded with the Regime and its allies on July 18, 2018.

HTS conditioned to get half of the findings’ sale price, however, many eyewitnesses reported that no worthy archaeological objects were found during the hunting operations and that the searchers were shocked to see that some sites had already been dug and emptied from objects, most likely by Kafriya and al-Fu'ah locals before being displaced to Regime-held areas, according to witnesses and pot-hunters.

Secret random excavations have spread widely in Idlib province recently, despite the numerous attempts by the Department of Antiquities to stop them and to limit such operations to the relevant authorities to protect the artifacts left, according to STJ's field researcher.

These excavations are the first public ones in Idlib province during which the hunters managed to access 200 archaeological sites in both Kafriya and al-Fu'ah, finding just a few worthless objects.

It is worth mentioning that following its entry to Kafriya and al-Fu'ah, HTS hold an auction on August 14, 2018, which has lasted for several hours, to sell properties and possessions it had seized from Kafriya people as spoils. [5]

A media activist from Idlib told STJ that some 500 pot-hunters, mostly Idlib residents, were given permission from armed opposition groups in control, to conduct excavations in Kafriya and al-Fu'ah; he said:

“The excavations were carried out throughout August 2018, during which specialized equipment were used by searchers who confirmed that they hadn’t found any worthy objects in the sites which they claimed to be already searched by some persons who are likely to be Kafriya and al-Fu'ah locals.”

The activist added that the excavations were suspended after the failure to find any precious pieces, that the findings cost no more than $100 or $200. 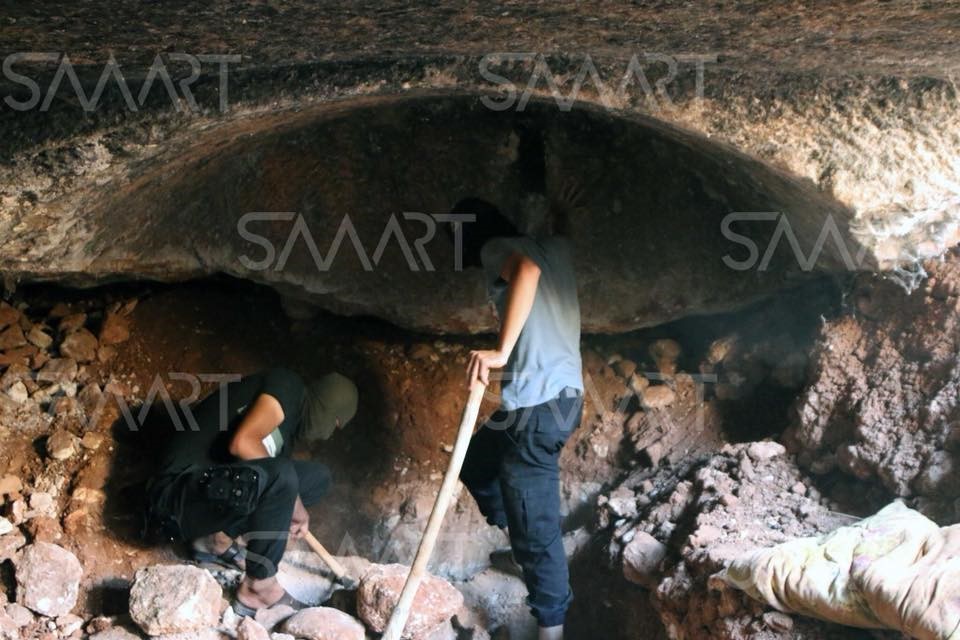 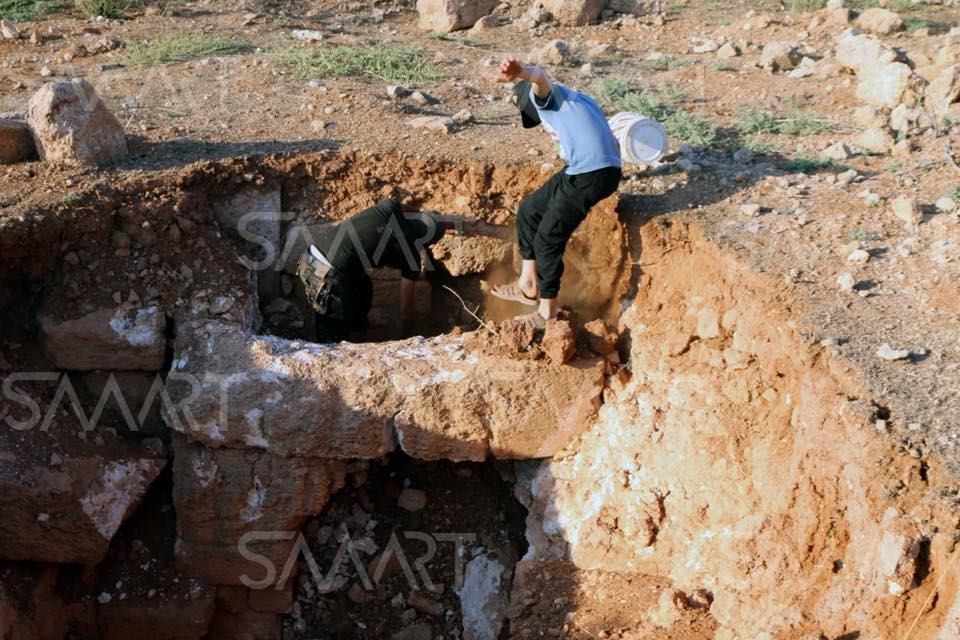 One of the sites excavated in Kafriya and al-Fu'ah during August 2018.
Photo credit:: Smart News Agency

One of the pot-hunters testified to STJ:

"HTS conditioned to split gains of the findings with hunters. We worked for more than 20 successive days using specialized tools and we managed to access more than 100 archaeological sites in both villages. Some sites were caves, craters and ancient cemeteries. However, the majority of the sites were already being searched and emptied from the worthy objects by the residents of Kafriya and al-Fu'ah before they were displaced to Regime-held areas. I found some ancient stones that only worth $200. We stopped digging on August 30, 2018 in compliance with armed opposition groups’ resolution, since the process failed. It is known that the findings sold to the black market traders who are responsible for smuggling them. I cannot dig more in details as it is a grave matter, but I would mention that a year ago, I managed to find precious archaeological pieces that worth $50,000, it was sold to a trader from Idlib southern countryside, and I split the money with the owner of the land where I found it.”

Ayman al-Nabu, the head of Idlib Antiquities Museum[6], stated to STJ that they had issued a circular in 2017 to prevent digging for ruins, but it lacked legal basis.

“On August 28, 2018, we concluded a workshop during which we agreed on legal provisions which must be applied by Sharia courts in order to stop random excavations for the archeological sites recorded by Idlib Department of Antiquities and hold accountable all those involved. Currently we are contacting local councils, Sharia courts, and legal authorities to validate the outcomes of the workshop in order to protect what is left of Idlib ruins. The Department of Antiquities reopened Idlib Antiquities Museum on August 13, 2018, with a few exhibits after five years of closure during which it was being looted.”

Al-Nabu added that Idlib province is known for its ancient museums and archaeological sites such as Ebla city, 6km south of Saraqib, Idlib eastern countryside. The reopening of Idlib museum sends a message to the UNESCO to assume responsibility towards the archaeological sites in Idlib. The Department of Antiquities contacts the relevant authorities to issue certified decisions for protecting these ruins and stop random excavations and hauntings. The archaeological ruins must be spared from any political or military conflict. 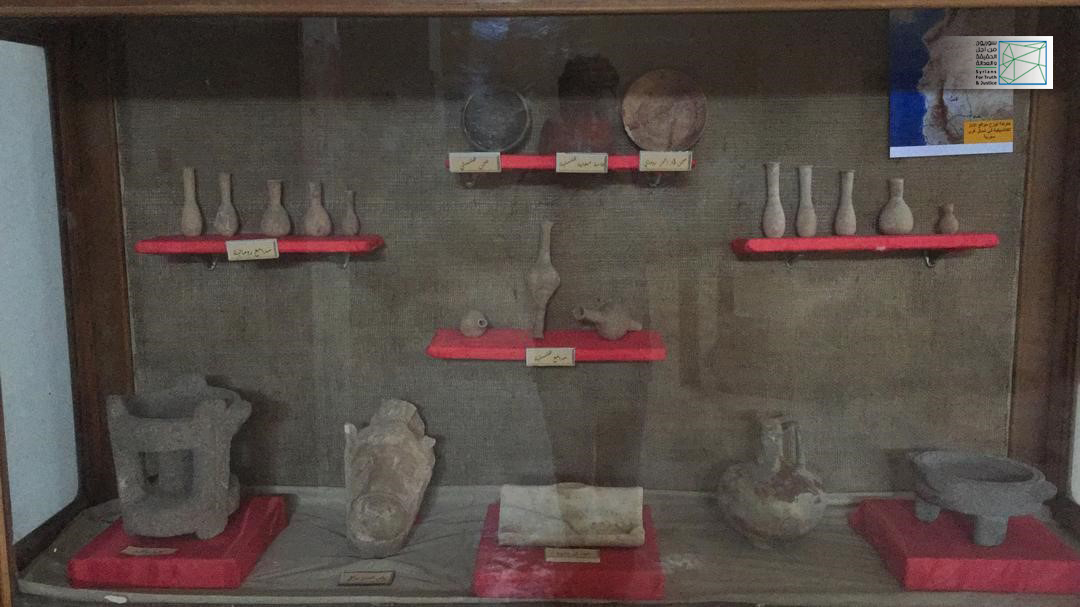 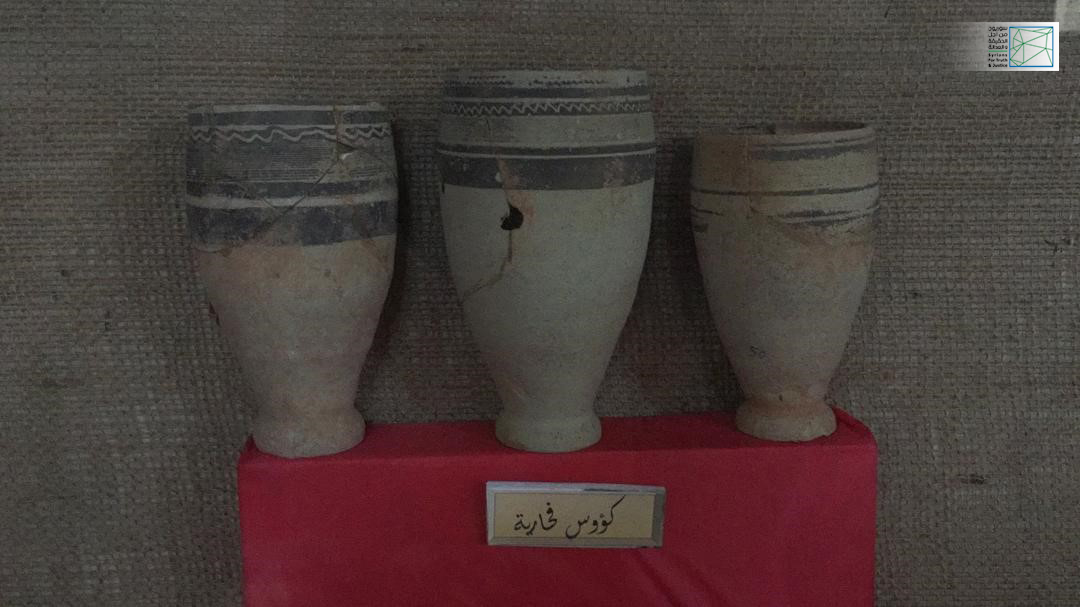 [2] Ahrar al-Sham al-Islamiyya was formed on November 11, 2011 with approximately 25,000 combatants. It is an Islamic military faction formed of integration of four Islamic factions: Kata’eb Ahrar al-Sham, al-Fajr al-Islamiyya Movement, Jamaat al-Taliaa al-Islamiyya and al-Iman al-Moqatila Brigades. Ahrar al-Sham al-Islamiyya actives in many areas that are not held by Syrian government, especially in the provinces of Idlib, Aleppo, and Hama, and is headed by Hasan Soufan/Abo al-Barra, born in Lattakia 1979, the ex-prisoner who was sentenced for 12 years in Sednaya Military Prison but released late 2016 following a prisoner swap agreement.

[3] Also known as the Sham Falcons Brigades, an armed rebel organization formed by Ahmed Abu Issa al-Shaykh who hails from Mount Zawiya, Idlib countryside. The brigade includes around 2000 fighters most of them are from Idlib countryside. Suqour al-Sham activates in Mount Zawiya and the south countryside of Idlib and has been recently active in al-Fu'ah.

[6] Affiliated to the Salvation Government/ the opposition coalition.