Introduction  Attacks on medical facilities and workers in Syria’s north and west increased during August 2018, as on August 30, 2018, the head doctor of the Surgical Specialist Hospital in Idlib city "Hussam Dubais" was abducted by unknown masked men from the building where he lives and been took to an unknown location, where he was tortured and brutally beaten before being released after two hours.

On August 2, 2018, heavily armed militias of the Hay'at Tahrir al-Sham/HTS stormed the Uday al-Hussein hospital in Saraqib city, and assaulted members of the medical staff, in order to remove one of their wounded from the hospital. It is worth mentioning that the same hospital was earlier in 2016 raided by fighters of Al-Nusra Front.

The increase of such incidents in Idlib provoked great public outrage, especially as they coincide with the Syrian regular forces’ violent bombardment on the city.

Unknown persons conducted four abductions of doctors in Idlib while HTS claimed responsibility for one during June 2018. Several medical institutions suspended their work in protest against targeting medical personnel in Idlib province.
The most prominent kidnapping incident was that of Dr. Mahmoud al-Mutlaq, which occurred in the evening of June 9, 2018 and he was released on the 15th of the same month, in exchange for a ransom of $150.000.[1]

In rural Latakia province, western Syria, Dr. Khalil Agha director of the Free Health was kidnapped on August 7, 2018, when an armed group attacked the Sahel Specialist Hospital in Kherbet Eljoz border village, as it assaulted the guards and handcuffed them, then stormed the hospital and took the Dr. Khalil Agha to an unknown destination, and released him in exchange for $125.000, specifically on August 12, 2018.[2]

Recently, there has been a marked rise in the number of anonymous attacks against medical facilities and staffs in Idlib province. This security chaos led to popular unrest, and the medical workers to launch strikes in protest against such practices[3], pointing out they provide medical services for more than 500 thousand people throughout Idlib province monthly, including 13.000 surgeries, therefore, the concerned authorities must protect medical personnel and facilities, and work to find and hold the perpetrators accountable, STJ field researcher reported.

Dr. Hussam Eddin Dubais, the director of the Surgical Specialist Hospital in Idlib city, was abducted by masked men and took to an unknown location, which was confirmed to STJ by one of the hospital workers:

“At 9:30 p.m. on 30 August 2018, unknown persons cut out the power to Dr. Hussam’s house to lure him out, and indeed he hurried down to the ground floor of the building to check the breakers, but he was shocked by four masked people there trying to arrest him. The neighbors saw what happened but the only thing they could do was reporting the car in which he was taken to an unknown destination for more than two hours, during which he was severely beaten, and then thrown on the roadside near Ma'arrat Misrin roundabout in Idlib, where he was found and taken to the hospital, and now he recovers. The kidnappers, however, still unidentified.  " 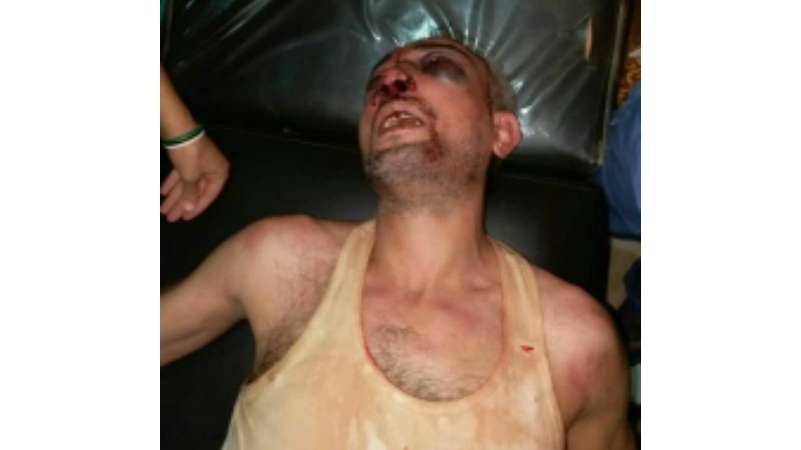 Idlib people blamed the abduction of medical workers on the armed opposition groups controlling the city, represented by Hay'at Tahrir al-Sham. Regarding this, a witness from Idlib said to STJ:

“Hay'at Tahrir al-Sham is the sole controlling party in Idlib. It’s impossible for anyone to draw a weapon in the city except the agents of Hay'at Tahrir al-Sham which encircles the city by checkpoints. We, civilians, unarmed civilians, couldn’t rescue Dr. Hussam Dubais from kidnappers when we heard the quarrel between them. It is no doubt that maintaining the safety of medical workers is a priority for civilians, especially because of the violent bombardment the city is witnessing, knowing that such violations would lead medical institutions to close their doors, which will cause a humanitarian disaster.” 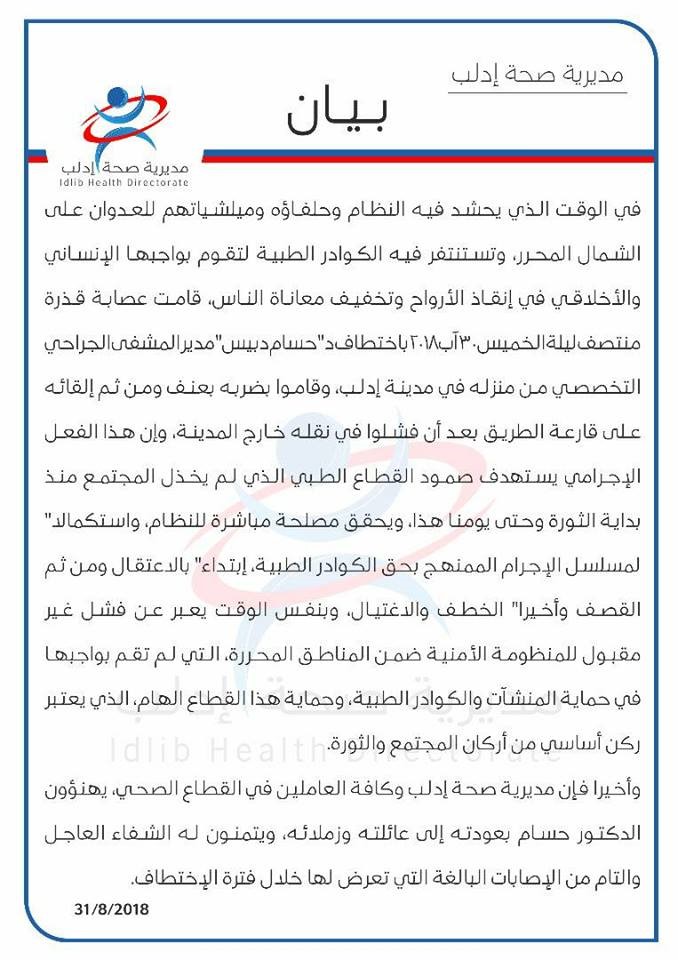 A military force of HTS raided Uday al-Hussein hospital on August 2, 2018, in Saraqib and assaulted the medical workers there. It is worth mentioning that Uday al-Hussein is the only hospital of its kind in the region which provides services to approximately 100 thousand people in Saraqib and surroundings. That was confirmed by Ziad Sattouf, the head of the hospital:

"On that day, an agent at one of HTS checkpoints, transferred an injured Colonel to the hospital, and while doctors were examining him, heavily armed HTS fighters entered the hospital, and started searching for the injured Colonel. They entered the radiology room where he was been taken for an X-ray. They attacked the medical staff and took the injured Colonel despite the nurses’ tries to stop them because he was critical. This incident caused public resentment in Idlib, because of violating hospitals and assaulting medical personnel who always do everything they can to provide medical services to those who need it.  "

Sattouf added that Uday al-Hussein hospital was earlier in 2016 raided by gunmen affiliated to the al-Nusra Front searching for their wounded soldiers, during which they assaulted the medical staff there. He pointed out that if such incidents continue to occur the hospital services would be suspended and many people would be deprived from it, and added:

“People of Idlib, desperately need medical care in the current conditions. We are trying in every way to coordinate with the Directorate of Health and all medical institutions to prevent recurrence of such incidents and violations that have recently spread dramatically and intensively in Idlib. We wish all the factions operating on the ground to do their humanitarian and moral duties and to respect medical facilities and workers and protecting them by conducting night patrols to stop looting and kidnapping incidents.”

On August 7, 2018, in rural Latakia[4], the Dr. Khalil Agha, the director of free Health Directorate in the Sahel[5], was abducted by unidentified gunmen. They stormed the Sahel hospital in Kherbet Eljoz and attack the hospital guards and handcuffed them, then stormed the hospital and took the Dr. Khalil agha to an unknown destination, according to STJ field researcher.

“Dr. Agha, the founder of the Free Health Directorate, was been threatened many times, but he insisted to continue his fieldwork. However, he had been abducted for almost three days and released after paying $125.000 thousand dollars to the unknown kidnappers, which led the Free Health Directorate to issue a statement on the repeated attacks on medical workers, and sent a warning to the civilians and authorities responsible for the city’s security to provide the necessary protection for medical staff, and noted that the repetition of such practices against medical personnel will oblige the Health Directorate to suspend the work in hospitals and health centers.  "

Dr. Khalil Agha was released[6] on August 12, 2018, by a ransom, while the identities of his captors remain unknown, HTS, however, is likely to be involved.

[4] Latakia countryside is controlled by a number of rebel factions including HTS and the Turkistan Islamic Party.

[5] Affiliated to The Syrian interim Government/ The National Coalition for Syrian Revolution and Opposition Forces.