Popular Discontent in Response, as the New Academic Year Approaches

The Autonomous Administration’s Education Authority ordered Syriac and Armenian private schools, affiliated to Christian churches northeast Syria, on August 7, 2018, to close down within 24 hours for not being licensed by it and for teaching the Syrian government curriculum not its one.
Schools closure decision met a popular discontent, especially with the approach of the new academic year 2018-2019, eliciting strong opinions, both for and against, among the Syriac, as those affiliated with the Autonomous Administration, particularly the Syriac Union Party (SUP), supported the decision while Syriac churches, establishments and organizations said that it was arbitrary, as STJ's field researcher reported.

Christian Facebook pages posted on September 2, 2018 an announcement about an agreement reached to reopen all the closed schools. STJ, however, could not verify it.

The post published by a Facebook page loyal to churches on September 2, 2018 on an agreement reached to reopen the schools shut down.
Photo credit: Facebook page of Mar Jerjes, the Syriac Orthodox Church.

After regime forces withdrew from swathes of Syria's northeast early on in the seven-year war, Kurds began building up their own institutions in the area, including police forces and schools. The Autonomous Administration which was formed in 2014 imposed its Kurdish curriculum, in 2016, on all the Syrian government schools in the region to be taught to Arab, Kurdish and Syriac pupils each in their native language. Initially, that curriculum was written to the first three primary grades and now it reached the tenth grade. Private schools, however, followed the Syrian government's curriculum plus classes in both Syriac and Armenian. It should be noted that teaching the using the accredited state curriculum is a prerequisite for the Syrian Government to recognize those schools.

Students’ parents, however, rejected teaching the Autonomous Administration curriculum, since it’s not recognized by the Syrian government, which will damage their future education, employment and other opportunities. 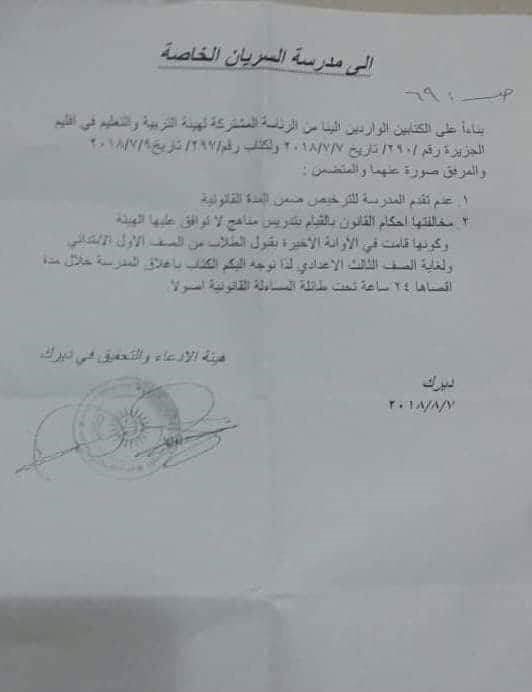 The resolution provides for shutting down the Syriac private school in Derik/ al-Malikiyah on August 7, 2018 for not being licensed. Photo credit: media activists

In Qamishli/ Qamișlo Al-Hurriya Private and Maysaloon Private Schools were also closed down.

A total of about 17 schools were closed down across the Autonomous Administration enclave, as the field researcher of STJ reported.

Mar Assia al-Hakim Church was ordered to shut the doors of its primary school on August 7, 2018 for breaching Autonomous Administration’s instructions, a local reported to STJ.

"Classrooms today are of about 60 students each, mostly Kurdish, after they were of only 30 to 35 before the outbreak of the Syrian crisis, as the pope ordered to receive more. People routinely walk-in the church up until now to register their children, but the church is pending on following the closure decision until the archbishop, who is on a visit to the USA, comes back." The witness added. 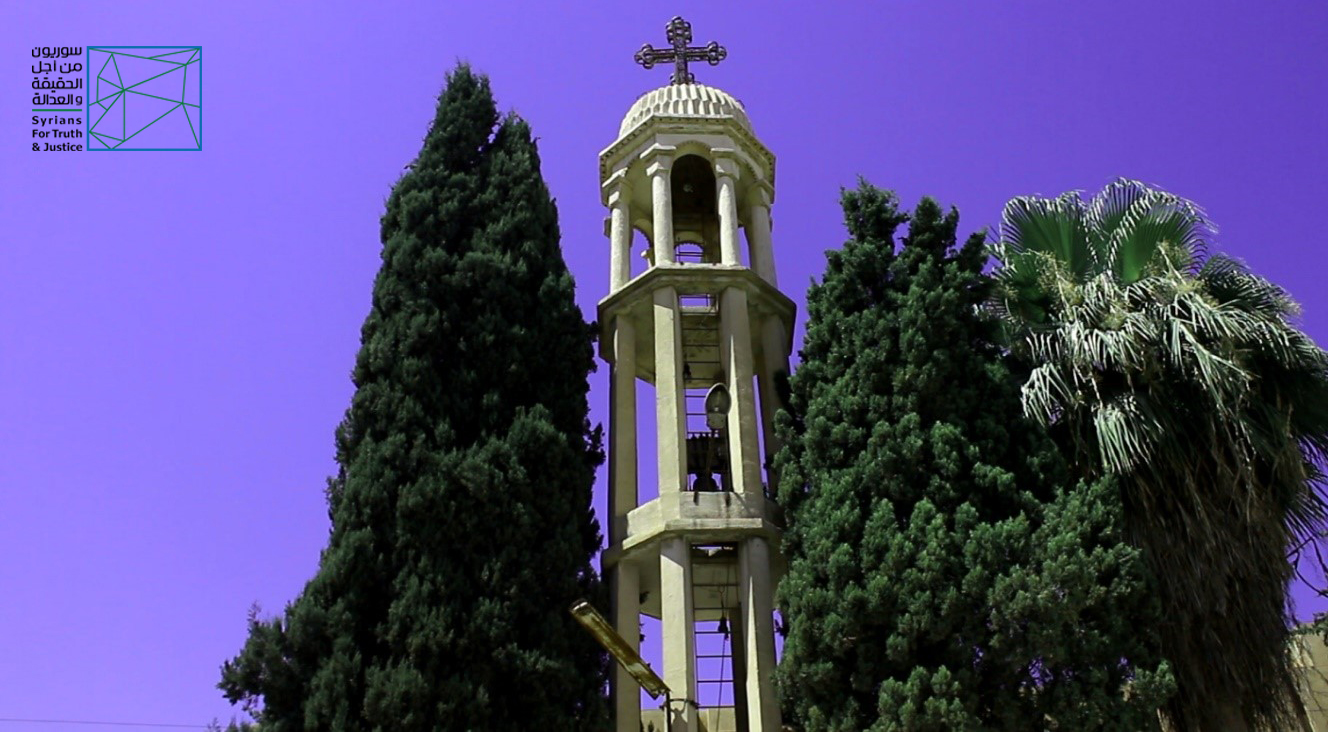 The Sutoro Forces of the SUP, which act under the umbrella of the Autonomous Administration, shut down the remaining private schools in Qamishli/Qamișlo, consequently the Syriac and Armenian communities staged a protest on the exact day in al-Wusta neighborhood. Protestors headed to al-Amal Private School affiliated to St. Mary Church to reopen it, but the Sutoro Forces fired in the air to disperse the demonstrators.

One of the protesters testified to STJ:

"Our children wouldn’t be able to pursue their education if the schools were still closed. We do not accept these abusive practices. We are loyal to the Syrian government and support its resolutions. The Autonomous Administration iniquitous measures led our sons to flee the country. We will continue to protest and call for reopening the schools even if that will cost our lives." 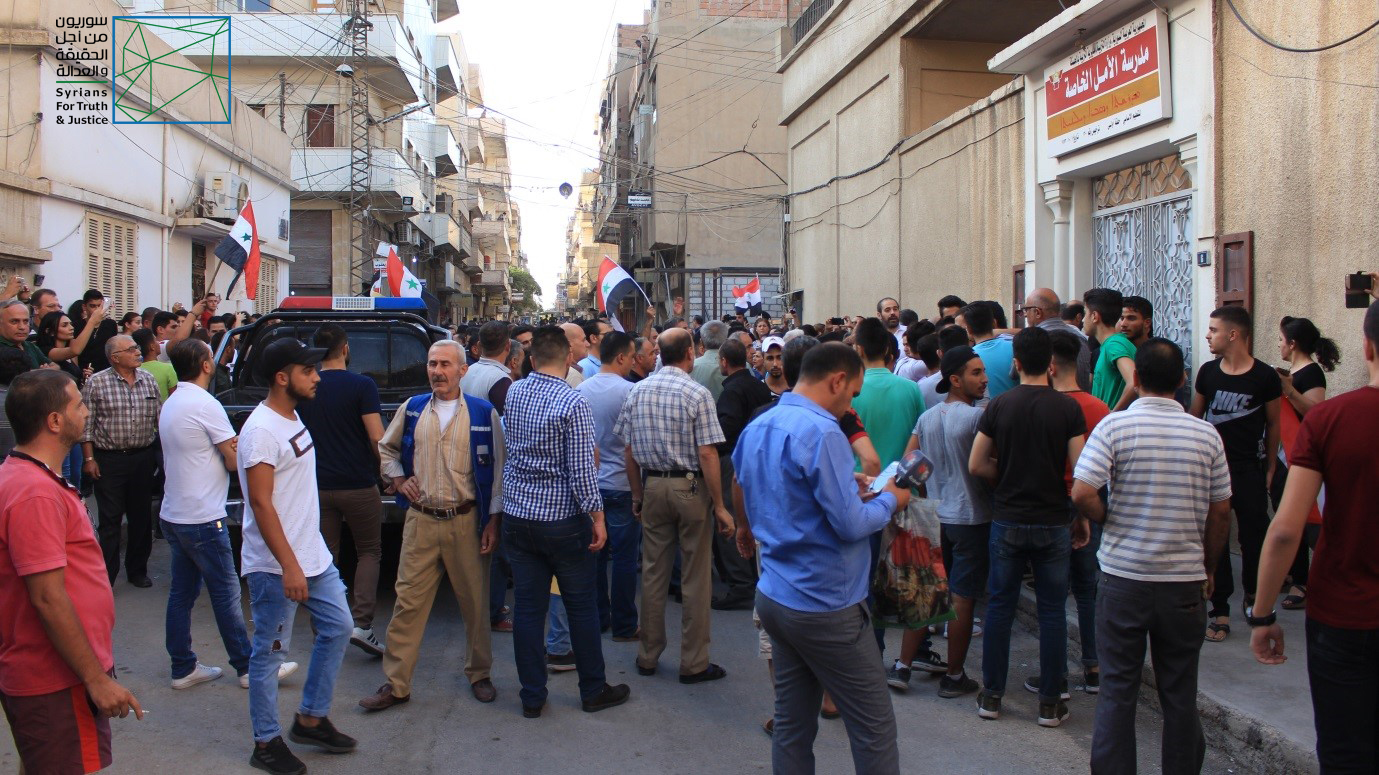 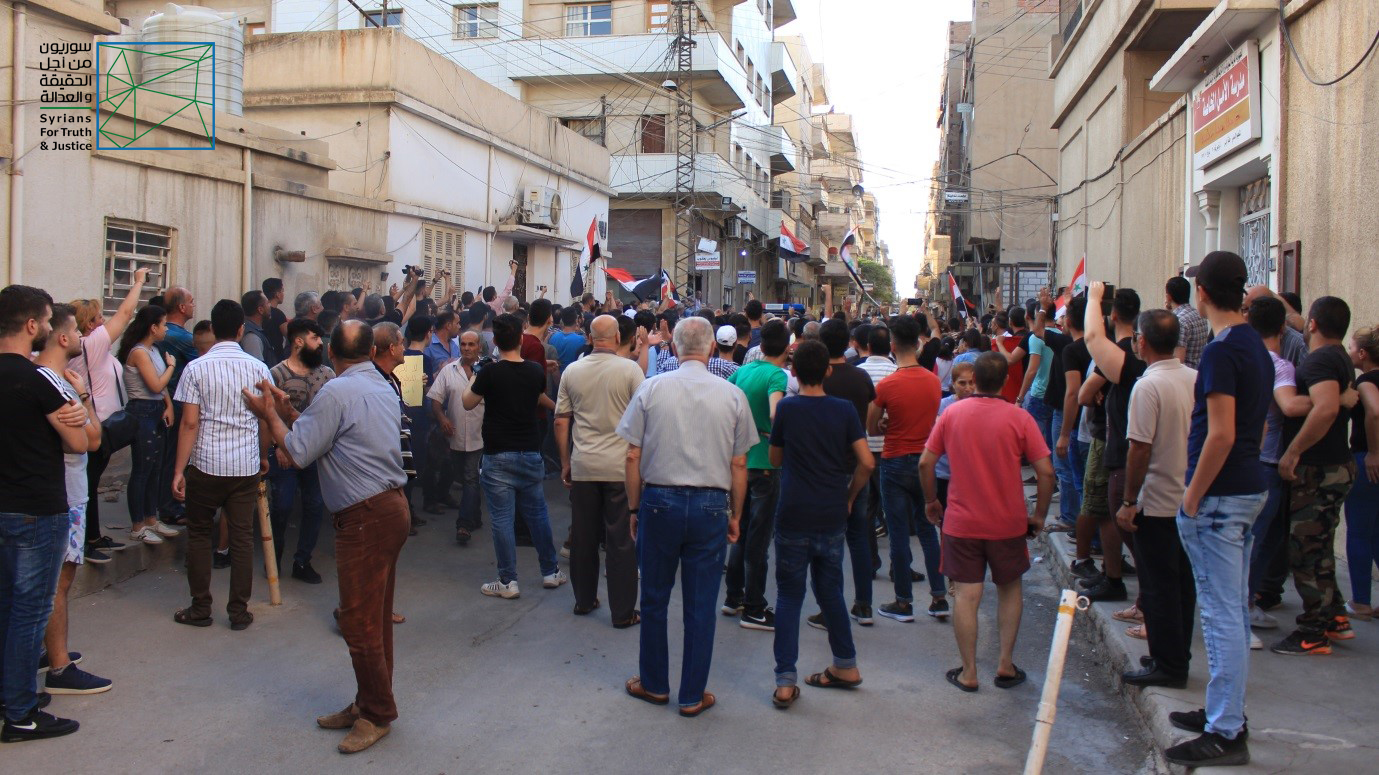 The Assyrian Democratic Organization, also known as Mtakasta, issued a statement, on August 9, 2018, in which it stated that the Autonomous Administration’s decision was under false pretenses, as the schools have been licensed by the Syrian government since 1935 and teach its curriculum in addition to some classes in Assyrian as a liturgical language.

The statement stated that the closure decision targets the Assyrians in particular, and it contradicts the authorities’ insistence on unity and democracy, specifically that of education.

The Assyrian Democratic Organization’s statement on the decision of the northeast Syria schools closure.
Released on August 9, 2018.
Photo credit: the official Facebook page of the Organization

Dawood Dawood, a member of the political office in organization, testified to STJ:

“The organization rejects shutting down the schools, because it is an unmatured decision which will put the future of the next generation at stake. All the northeast minorities; Arabs, Kurds, and Assyrians refused the resolution and the Kurdish curriculum as well, and calling the autonomous administration to annul it.”

He added that the educational curriculum would be agreed on when things settle down in Syria and said:

"Two years ago, the Christian Body, composed of churches and parties, that represent the Syriac, Assyrians, and Armenians agreed with the Autonomous Administration to teach the Syrian government's curriculum in the private schools but on the condition that no new students enrolled. The shock is now that Autonomous Administration asks to license these schools and imposes its Kurdish curriculum on them, which no universities – whether Syrian or foreign – recognize it."

The Churches association engaged the Autonomous Administration in a prolonged dialogue with the aim of overturning the latter’s decision to shut down private schools in northeastern Syria. Meetings are being held between the Educational Authority and the AUP of Autonomous Administration with the Syriac community, Dr. Syrob, member of Armenian Archbishop in al-Hasakah city reported to STJ.

"We follow our religious authorities based in Damascus, Armenia, and Beirut, and our schools are spread across Syria and are legitimated by the Syrian Government, so we can’t follow the Autonomous Administration or teach its curriculum. We don’t hostile any party and we are trying to get over this crisis in fraternal dialogue. Schools must be open in order our children can be educated, that is our main goal. In the next coming days, we will have dialogues with the Syriac, Catholic, the SUP, and the Kurds to tell them that these practices serve neither. We want our private schools to include children of all Syrian people components, but the Autonomous Administration reject the enrollment of Kurdish students here."

On August 18, 2018, leaders and priests of the Christian churches met in Qamishli to discuss the Autonomous Administration’s decision to license the private schools and to teach its Kurdish curriculum. Which they consider it to be a violation of the rights, properties, and lands of the Christians, directly or indirectly. The attendance assured that the private schools enjoy a legal legitimacy and are as important as the churches and closing them will affect negatively the Christian existence in the region. They also called the Autonomous Administration to retreat from their decision in order to keep atmosphere of love, peace and coexistence in the province. 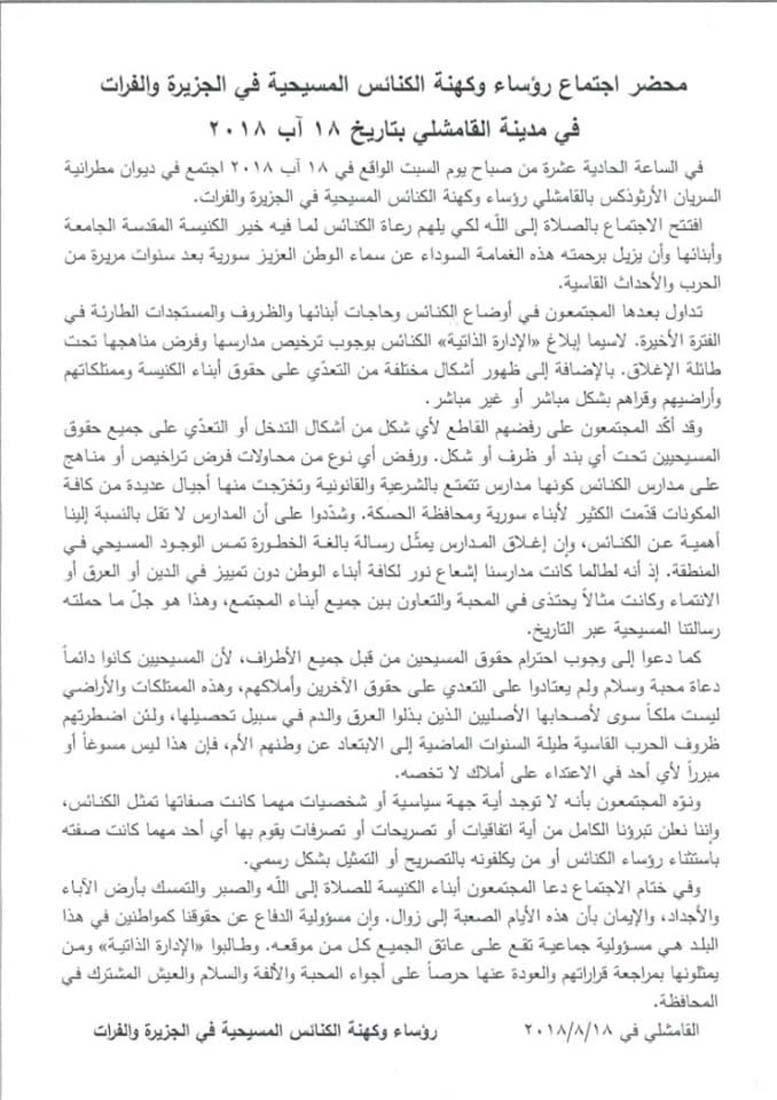 The statement of the churches’ leaders and priests in al-Jazira and the Euphrates region on the closure of private schools by the Autonomous Administration northeast Syria.
Released on August 18 Photo credit: Media agencies

The political office of the Assyrian Democratic Organization published a statement[1] on August 29, 2018 demanding the Autonomous Administration to retreat its decision, warning from the use of the schools’ issue in other agendas by some parties to inflame the internal conflicts, and arouse the nationalist and religious animosity.

Hana Sawmi, member of the Syriac Culture Association of the SUP acting under the umbrella of the Autonomous Administration, reported to STJ that the Assyrian Orthodox Church’s closed schools used to teach the Assyrian as a secondary language and look forward to use it in their curriculum. He said:

"We wanted to strengthen our language by teaching a Syriac tongue curriculum as the Syriac people forget all about their language when grow up. We just want to keep Syriac heritage and make Syriac people proud of their ancestors. Aramaic is the Syrians’ mother tongue that won’t be died" He concluded.

The Syriac Cultural Association, established in 2007, sees the Syriac Aramaic one of the Semitic languages which was once the official tongue of powerful empires including Assyrian, Babylonian, and the Persian, besides the Mesopotamia Civilization.

The Education Authority stated on August 29, 2018 that the churches leaders and priests in their meeting accused the Autonomous Administration of violating the Christian rights by imposing its own curriculum and license on the churches’ schools besides their assertion that all the schools are affiliated to the Syrian government, which the statement in turn accused it of using the schools for financial goals and to disseminate the Arab Socialist Ba'ath Party’s ideologies including the totalitarian and undemocratic.

"The churches’ leaders and the priests refuse the introduction of the Syriac and Armenian languages in the private school except using them as liturgical languages. While the Autonomous Administration, on the other hand, insisted on using them in teaching all subjects including the religious and nationalistic" the statement claimed. 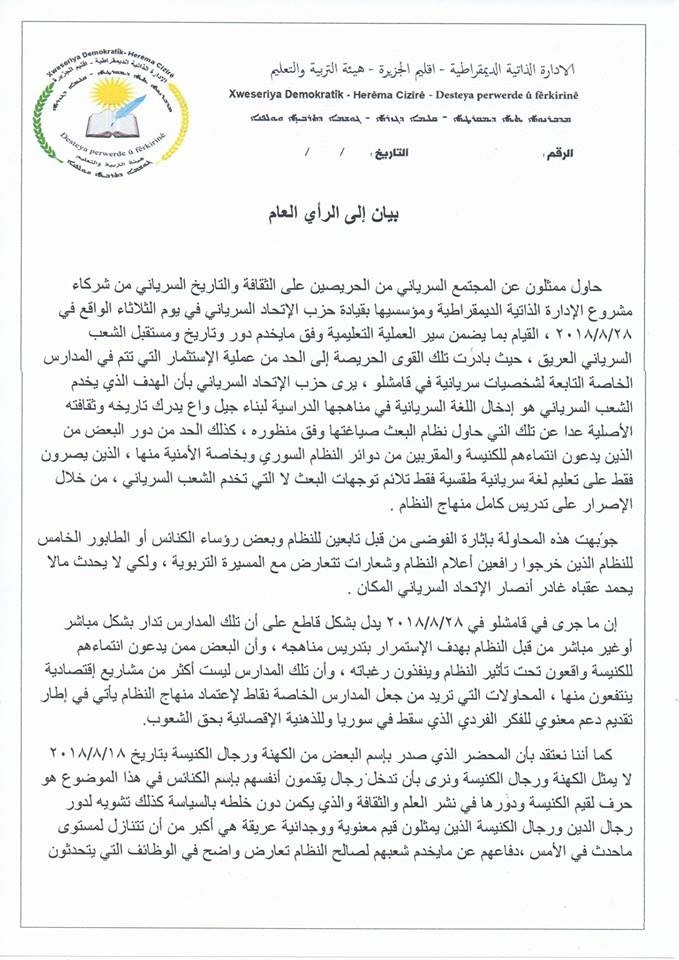 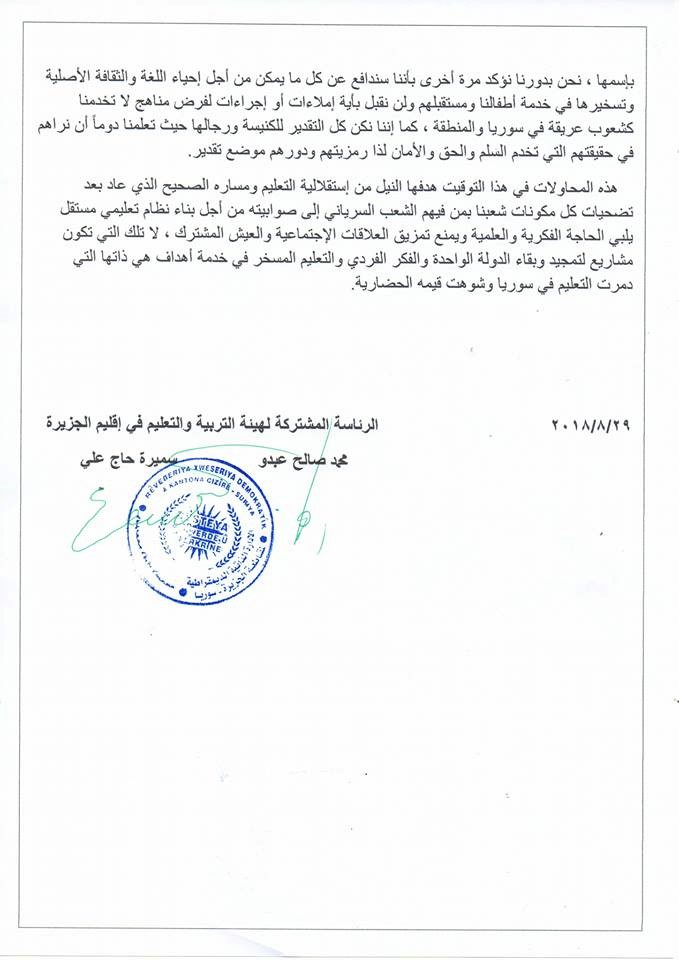 The Syriac Culture Association and Olaf Tau Foundation, in charge of preparing curricula in Syriac, illustrated on August 28, 2018 that they sent administrative staff on the same day to the schools of Syriac Orthodox Church to discuss the method of teaching the Syriac curriculum with no intention to close them down. 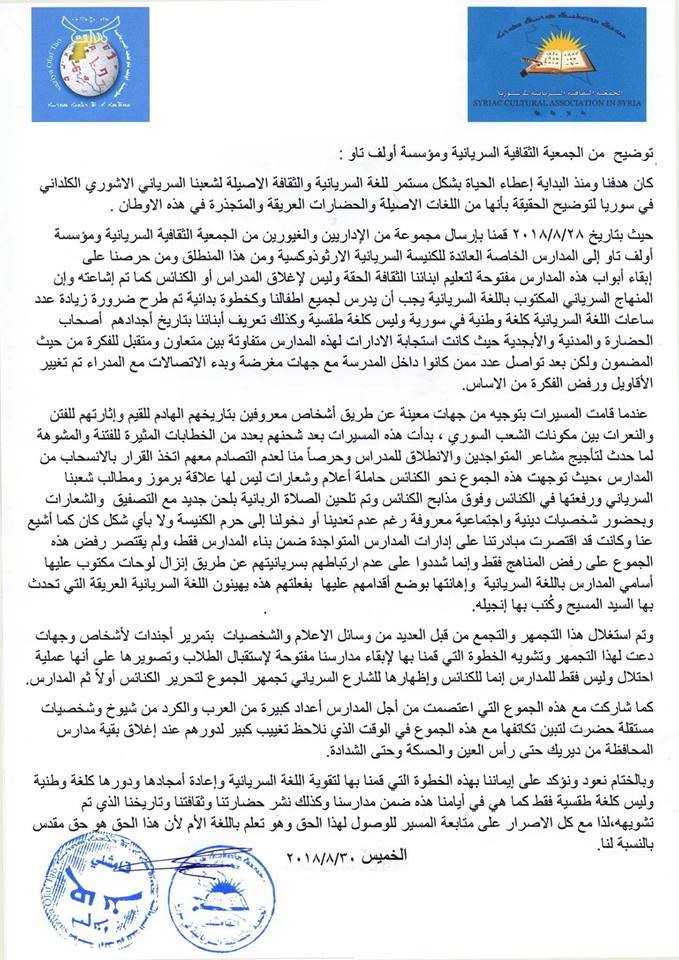 Earlier in 2016 Syriac private schools refused to teach the Administration’s curricula and thus signed an agreement to not enroll new Arab or Kurds pupils, which it breached later and that provoked the anger of the Education Authority, well-informed sources reported to STJ.