According to numerous eyewitnesses, the bulldozing was probably to remove the bodies of victims fall in the suspected chemical attack of April 7, 2018

September 6, 2018 165 views Download as PDF This post is also available in: Arabic Font Size A A A

A photo shows part of burying works in “Al Sindiana Graveyard” in Douma city before being bulldozed by the Syrian Regular Forces in mid-June 2018. Credit: Local Council of Douma city, previously

Having taken control over Douma, the last rebel-held town in the eastern Ghouta[1] on April 8, 2018, pro-government forces took many arbitrary measures against civilians there, as they arrested young men, in contravention of an agreement conducted with Jaish al Islam on April 8, 2018[2], and they even offend the dead who fall in the latest fierce offensive[3].

The well-known “Al-Sindiyana Cemetery”, in Douma, was being bulldozed by Regime forces, from mid-June until July 20, 2018, in order to get rid of the bodies buried there after the suspected chemical attack of April 7, 2018, and remove any evidence related, according to several witnesses.

Victims of the alleged chemical attack of April 7, 2018, against Douma were buried in different places, which made it difficult for the Regime forces to find and remove, as they commenced to search for them immediately after taking control over the city in order to conceal any incriminating evidence, as STJ field researcher reported.

The Independent International Commission of Inquiry on the Syrian Arab Republic issued a report[4] on June 20, 2018 in which it stated; “Through the widespread and systematic bombardments of civilian inhabited areas and objects in eastern Ghouta, and the continued denial of food and medicine to besieged civilians during the period under review, pro-Government forces perpetrated the crime against humanity of inhumane acts causing serious mental and physical suffering.

Hassan al-Ajwa[5], a former member of Douma Local Council, told STJ that the pro-government forces’ indiscriminate bombardment on eastern Ghouta, which enabled them to gain control over it on April 8, 2018, targeted the living and the dead as well, as Douma’s cemetery had been repeatedly attacked, which led the civil actors to find another burial ground in the outskirts of Al-Sindiyana neighborhood inside Douma by the beginning of 2013. He goes on to say:

“Douma’s cemetery in the northwest, became a target of the Regime forces’ artillery and snipers, stationed on a mountain overlooking it, as they repeatedly targeted anyone tried to get close to it, resulting in the kill of numerous civilians. That led civil actors to allocate a ground in Al-Sindiyana neighborhood periphery, which previously was a small battalion headquarters of regime forces to be an alternative burial, by the beginning of 2013,”.

A side of the burials in Al-Sindiyana Cemetery, Douma city, before being bulldozed by the Syrian Regular Forces in mid-June 2018.

Al-Ajwa added that no one imagined that Al-Sindiyana would be a main cemetery, or to be crowded with such a huge number of civilians who fall from 2013 to February 2018. He said:

“At first, we buried the bodies as usual, one body in one grave. However, the death toll rose dramatically due to the relentless bombardments by many types of weapons, so we needed to change how we bury. We dug mass graves, each of 10 meters deep, in which we ended up burying eight bodies on top of each other”.

The former Local Council of Douma published a footage[6] on January 24, 2017, shows a side of the burials in Al-Sindiyana Cemetery, Douma city. 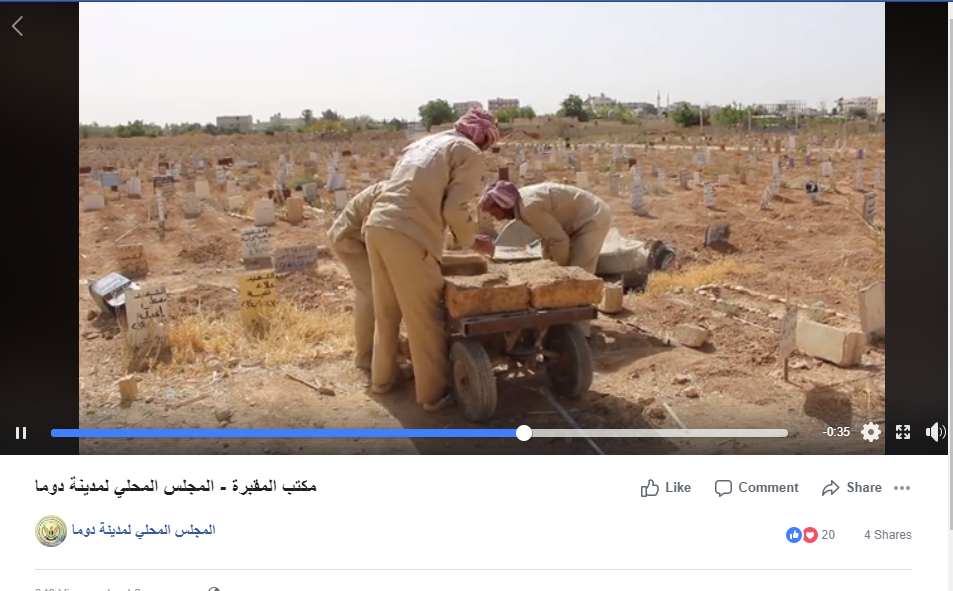 A still taken from the abovementioned footage, shows a side of the burials in Al-Sindiyana Cemetery, Douma city, on January 24, 2017.

Syrian army and allies stepped up offensive against all eastern Ghouta, on February 18, 2018, using different types of weapons, in an effort to recapture it. During their advance into the city, they stationed in the vicinity of Al-Sindiyana Cemetery, which made it a target of their gunfire. Amer Rihan[7], a former civil defense member in Douma, confirmed that to STJ:

“On March 10, 2018, the civil defense teams were no longer able to reach Al-Sindiyana Cemetery. Bodies of more than 80 bombardments victims were stored in morgues for four days, including my brother whom I managed to bury two days after his death, as we couldn’t transfer them anywhere since the heavy machineries were not able to move due to the intensive fire on the city from warplanes and artillery. Eventually, we piled them up in a grave we dug in one of Douma’s parks, despite the neighborhood residents’ objections as they fear the place would be targeted because of the burials, yet we had no better alternative”. 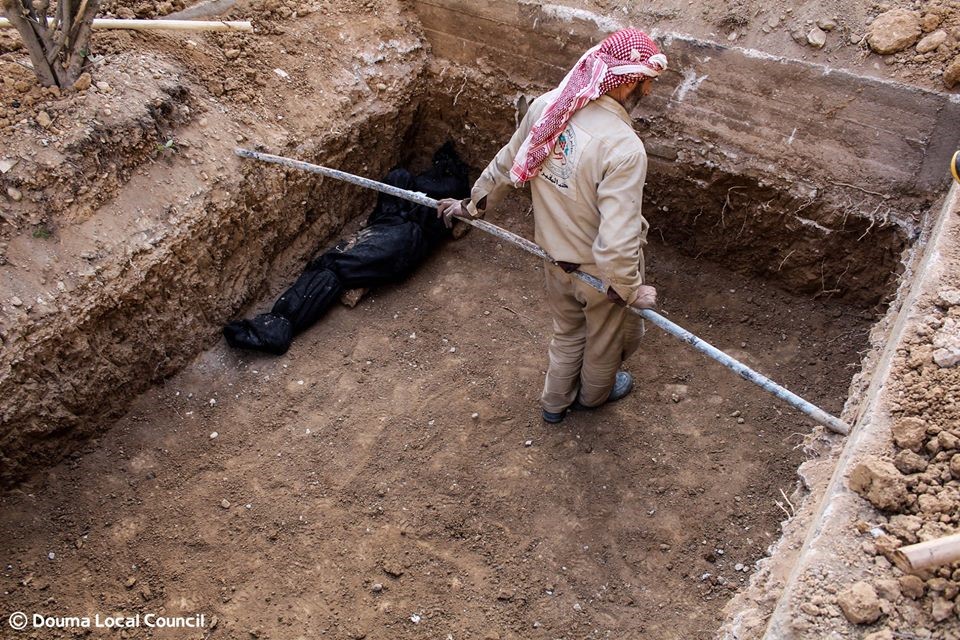 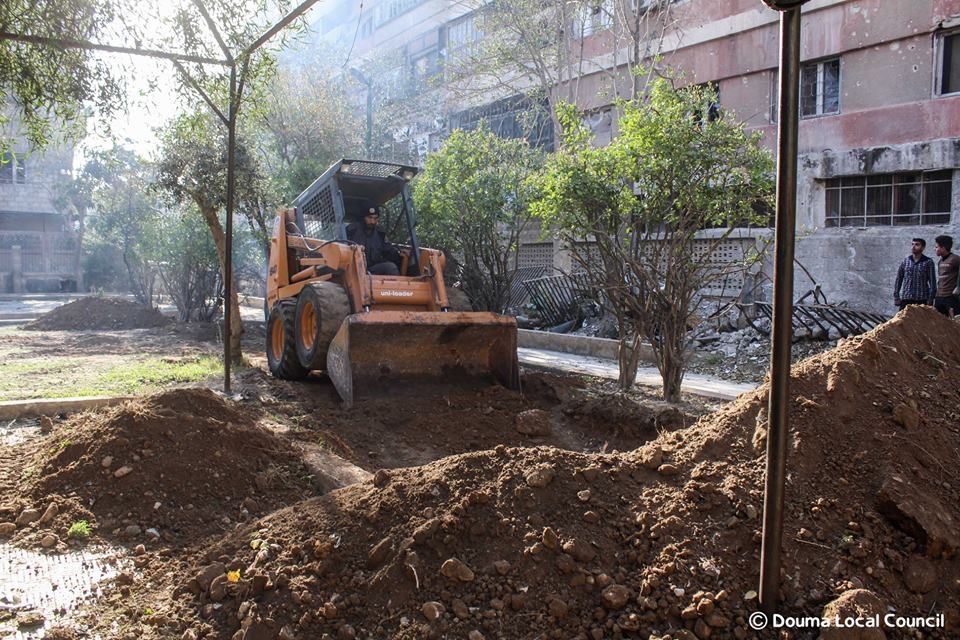 The mass grave dug in a park on March 11, 2018.
Photo credit:
Local Council of Douma city

The Syrian Regular Forces abused those who refused to leave Douma after taking it, in mid-April 2018. Majd Bakkoura, a media activist from Douma, confirmed this to STJ[8]:

“My nephew, Khalid Al Kurdi, who killed in an aerial bombardment on Al Batwana neighborhood on March 10, 2018, was the last to be buried in Al-Sindiyana Cemetery, which was once a battalion headquarters of regime forces. In mid-June 2018, the Syrian regime bulldozed parts of the Cemetery in several interpolated days, since there were many bodies in it.”

Regime forces haven’t even spread the dead from their abuses! As they intended to desecrate cemeteries by bombing and bulldozing them and exhuming bodies. Bakkoura said:

“The only reasons Al-Sindiyana Cemetery was bulldozed, the information which the Regime was received about the burial of some victims who fell in the suspected chemical attack of April 7, 2018 in it, so that it can conceal evidence. As it couldn’t do that to relocate its battalion, since it was small and not that important. Further, the regime also bulldozed the areas outside the battalion territory, which the cemetery expanded on because of the large numbers of dead.

I have no idea how many bodies were exhumed, since it is very difficult to contact people inside Douma. The regime struck fear into their hearts by the ongoing arrests campaign it conducts. However, I heard that the Syrian Regular Forces returned the bodies to the Cemetery after bulldozing it”.

Bulldozing Al-Sindiyana Cemetery, began in mid-June and lasted until July 20, 2018, as the Regime forces had been searching for the places in which the victims of the April 7, 2018 chemical attack on Douma were buried, in order to remove them and conceal any evidence possibly implicating the Regime in using chemical weapons, according to an activist from Douma.

The majority of eyewitnesses and Douma locals who were interviewed by STJ, converged on the probable cause of the Regime forces’ bulldozing Al-Sindiyana Cemetery, which they said it was to get rid of the bodies buried there after the suspected chemical attack of April 7, 2018, and remove any evidence related.

The Regime forces also besieged and bulldozed the cemetery of Zamalka City, and then dug it up, on August 8, 2018, as they withdrew many bodies and transported them to an unknown place. Those bodies, according to many locals and activists, belong to victims fall in the chemical attack of August 21, 2013, on eastern Ghouta. Through this, the Regime forces were trying to conceal any evidence against them, according to numerous eyewitnesses and locals interviewed by STJ field researcher.

[1] The Syrian Regular Forces and their allies managed to fully control eastern Ghouta following a violent military campaign, started from February 18, 2018 and ended on April 8, 2018, after concluding an agreement with Jaish al Islam in Douma city on the same day, which provided for the release of all abductees detained by the latter in exchange for allowing its fighters along with their families and civilians, who did not want to settle with the regime, out to northern Syria. This agreement was preceded by other similar ones, the first of which was on March 21, 2018 with Ahrar al-Sham al-Islamiyya, provided to move its fighters with their families and willing civilians, to northern Syria. A further agreement signed with Faylaq al-Rahman and Hay'at Tahrir al-Sham (HTS) on March 2, 2018, provided for the same, and included towns of Irbin, Zamalka, Ein Tarma, and Jobar.

[2] STJ prepared a report on this entitled; “In Contravention to the Agreement Concluded Syrian Regular Forces Forcibly Conscript Number of Duma Sons and Use Others for Looting Operations”, STJ, published on June 17, 2018; https://www.stj-sy.org/en/view/584 (Last visit: August 15, 2018).

[3] STJ prepared a detailed report on all the massacres committed by the Syrian Regular Forces in eastern Ghouta throughout its latest military campaign. The report also covered the events of shelling Damascus, which resulted in many deaths and injuries, “The Unprecedented”, STJ, June 28, 2018; https://www.stj-sy.org/en/view/608 .

[5] A recently displaced to northern Syria, interviewed by STJ field researcher in August 2018.

[7] One of the recently displaced people towards the north of Syria. He was interviewed by STJ’s field researcher in August 2018.

[8] A recently displaced to northern Syria, interviewed by STJ field researcher in August 2018.