an image taken from a video footage posted on July 18, 2018, showing some buses that ecacuate residents of both towns Kaftiya and alFu

The Salvation Government[1] operating in Hayat Tahrir al-Sham (HTS[2])-controlled areas in Idlib city demanded to move the internally displaced people- who came from different parts of Syria and resided in scattered schools throughout Idlib province- to towns of Kafriya and al-Fu'ah, which were evacuated recently from all their residents, being civilians or militaries, under an agreement[3] reached between HTS and Iran on July 16, 2018.

An official statement released by the Salvation Government on August 7, 2018, attributed the reason to ask to get out the displaced was the desperate need of the Ministry of Education to activate schools and prepare them to intake the increase number of the students. However, local activists said these procedures to be a proactive steps to prevent other military factions from seizing all the houses in both towns, since some factions actually started to house their fighters in the towns. 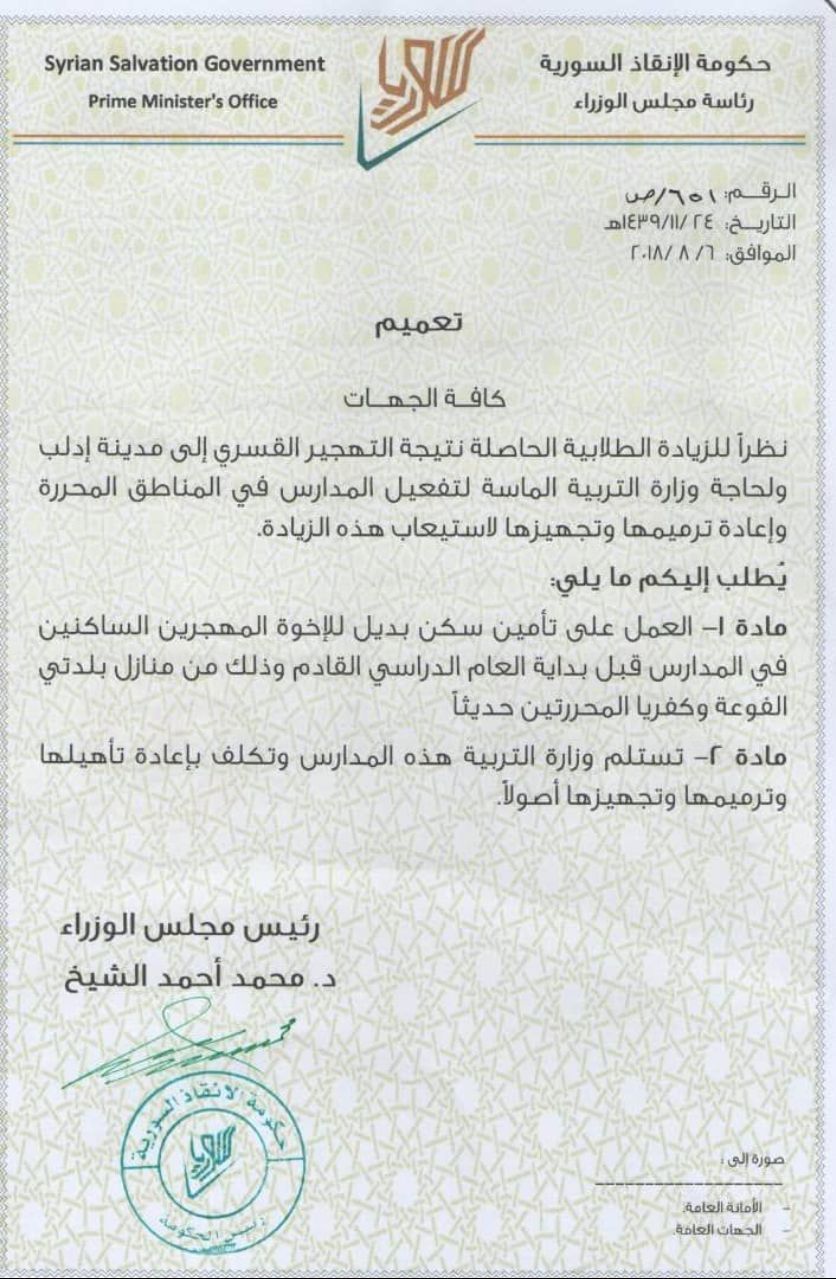 Copy of the statement released by the Salvation Government regarding evacuating schools in Idlib city from the displaced and moving them to nearby towns of  Kafriya and al-Fu'ah.

Concerning the situation of infrastructure and services in both towns, Basil Hawa, the local activist said in an interview with STJ on August 7, 2018, that the destruction is partial and simple in just two neighborhoods from the side of Binnish city, whereas there are lots of mines specially in the agricultural lands besides some anti-personal mines and improvised explosive devices were rigged prior the evacuation process and the rate is 10 mines in each single neighborhood.

As soon as the evacuation process was over in Kafriya and al-Fu'ah on July 19, 2018, only the civilians from different areas were allowed to enter. Some displaced were moved to reside there as well, the activist added.

Jaysh al-Ahrar announced it inhabited several of its elements in addition to some displaced from Damascus countryside, Homs and Hama in houses it had seized in Kafriya and al-Fu'ah, according to press statements by the military commander[4] in Jaysh al-Ahrar, who calls himself Abu al-Mu'tasim, to a Syrian local news agency on August 5, 2018.

HTS had concluded an agreement with Iran to evacuate all of the residents, being civilians or militaries, of Kafriya and al-Fu'ah- the predominantly Shiite, and move them to Syrian regular forces-controlled areas in Aleppo province in exchange for the release of 1500 from the civilian detainees in Syrian apparatus security, and the release of 40 fighters of HTS, Syrian Liberation Front, and Free Idlib Army, as well as the release of 4 civilians who were detained by Syrian and foreign military militias that were in both towns.

[3] Well informed sources said the deal reached was as part of an old one that was called "the Four Towns Agreement", which means the four towns of Zabadani, Madaya, Kafriya and al-Fu'ah. The sources denied that there is a direct role of the Syrian government or the Russian side in this deal.