Update: Different Methods Recently to Inform Families of Detainees of the Death of their Sons in Syrian Detention Facilities 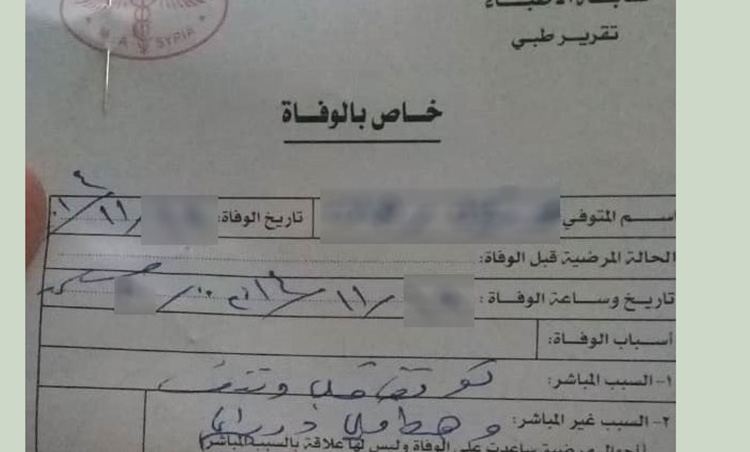 A forensic pathologist report related to one of the detainees in the Syrian detention facilities illustrates that the direct reason of the death is heart failure and apnea, and the indirect reason is hypotension. Photo credit: STJ.

On August 3, 2018, STJ have published a report entitled (Different Methods Recently to Inform Detainees/Disappeared Parents of the Death of their Sons in Syrian Detention Facilities[1]), and when talking about the cases in al-Hasakah province,  the following came,

(In al-Hasakah province, the field researcher of STJ said on July 30, 2018, that the civil registry directorate in al-Hasakah have not circulated nor hanged up any lists or names of detainees who died in the regime's confinements, and have not informed the relatives of the detainees about the status of their sons. He continued,

"the civil registry directorate is located within the security box which is held by the Syrian regular forces. The locals fear of entering the security box so that they are not arrested. Any case of informing the families or knowing the fate of the detainees has yet to be recorded, besides there has been no mourn tent for a detainee inside the city."

But on August 3, 2018, some updates/corrections came through some activists in al-Hasakah. One of the lawyers who declined to disclose his identity for security purposes, said in an interview with STJ,

"There are 14 cases when their families went to the civil registries and the authorities told them that the reason of the death is heart failure, knowing that there many names". The source stressed that the families and relatives of the detainees set up mourn tents for their sons in Ghweiran neighborhood.

Citation: STJ will sequentially update all the information, numbers and cases concerning (the issue of updating the data of the detainees by the civil registry directorates). It also notes that the organization's methodology in verifying the information relies mainly on direct testimonies and interviews that come from the residents and information obtained from its field researchers who are trained to adopt the international standards in documentation and collecting information. We apologizes to readers in case there are errors, which are certainly unintentional, or sometimes incomplete news from a certain point of view as in the case of the first news about al-Hasakah province.

[1] For more information, please click on the following link: https://stj-sy.org/en/view/656 .