Daraa Eastern Countryside was subjected to a heavy bombardment with barrel bombs and rocket-propelled projectile as of June 22, 2018

“The Free Daraa Governorate Council” of the Syrian interim Government, declared on Saturday, June 23, 2018, the eastern countryside of Daraa a “disaster area”, after several cities and towns there, such as Lajat, Buser al Harir, Nahitah, Melihit Al Atash and Al Hrak, were subjected to military attacks by the Syrian regular forces and their allies as of June 19, 2018.

Through a statement published on June 23, 2018, The Governorate Council said that the pro-government forces had systematically bombed the eastern countryside of Daraa, causing mass exodus and forcible displacement of its people. According to the statement, the number of IDPs from the eastern countryside of Daraa exceeded (50) thousand people, noting that the bombardment and  displacement foreshadow a humanitarian catastrophe, due to the lack of sufficient means and services besides the absence of houses and even tents. The Council, in its statement, called on the international community to shoulder its responsibilities and stop the shelling.

According to STJ field researcher, the cause of such a declaration was the intensified bombardment of the pro-government forces, as of June 22, 2018, on the eastern countryside of Daraa, especially on Buser al Harir, Nahitah, Melihit Al Atash and Al Hrak, north-eastern Lajat, El Karak and Muleihah al-Sharqyah, using rocket launchers and warplanes. The violent bombardment caused the destruction of many civilian houses and vital installations, besides the kill of more than 20 civilians and the injury of dozens, mostly children, it also led to unprecedented displacement waves.

A footage published by the Civil Defense in Daraa Governorate showed a side of bombarding residential neighborhoods in Buser al Harir and Lajat in the eastern countryside of Daraa on June 23, 2018. 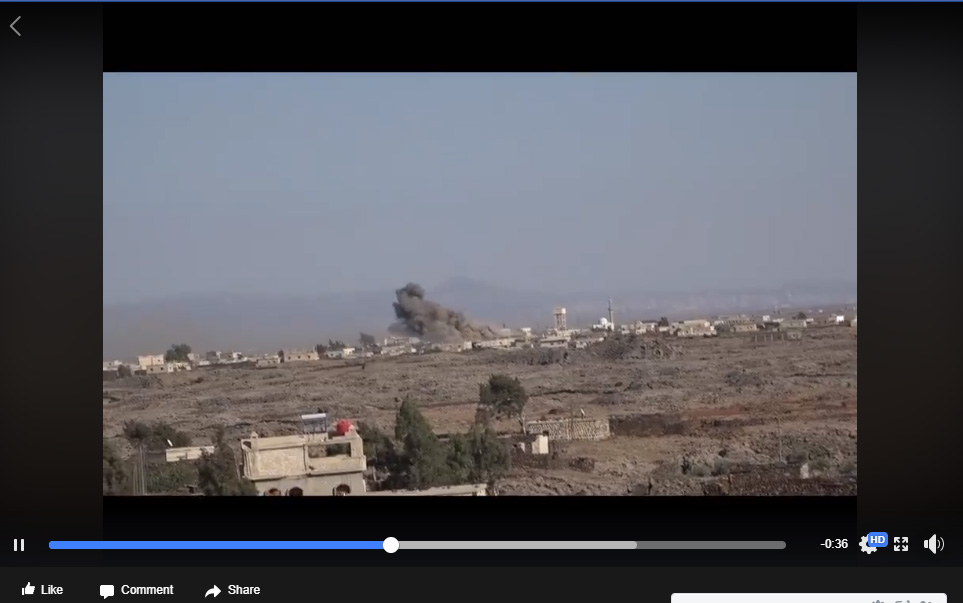 A shot taken from the aforementioned footage, showing a side of the bombardment on Daraa eastern countryside on June 23, 2018.

STJ field researcher reported that military aircraft believed to be Russian backed the Syrian regular forces in bombing rebel held areas in the eastern countryside of Daraa, for the first time, at midnight on Sunday, June 24, 2018. The researcher pointed out that military aircraft had carried out several attacks on each of Buser al Harir, Eastern El Karak, Melihit Al Atash, al-Maseeka and Rakham, causing extensive destruction to residential buildings. These raids lasted until the early morning hours of the same day.

Syrian regular forces, backed by Iranian and Lebanese militias, have unsuccessfully tried to control parts of the eastern countryside of Daraa since June 19, 2018. The residents of Daraa feared that the clashes and air raids would reach the border villages, which had become overcrowded with tens of thousands of IDPs, although Daraa is included in the agreed-upon de-escalation zones in southwestern Syria, according to an agreement signed on July 9, 2017 between USA, Russia and Jordan

On June 22, 2018, the UN issued a statement attributed to the spokesman of the Secretary-General on Syria (Stephane Dujarric), in which he said:

“The Secretary-General is gravely concerned by the recent military escalation, including ground offensives and aerial bombardments, in southwestern Syria. The attacks have resulted in the displacement of thousands of civilians, the majority of whom are moving towards the Jordanian border. The Secretary-General is also concerned at the significant risks these offensives pose to regional security.”